Accessibility links
Weekly Standard: Obama Squeaks Up On Libya Last week, President Obama stated that the well-being of American citizens is his "highest priority", but some believe that he should be doing much more to stop the bloodshed in Libya. William Kristol of The Weekly Standard argues that Obama's stalling reflects a crippling self-doubt throughout the administration. 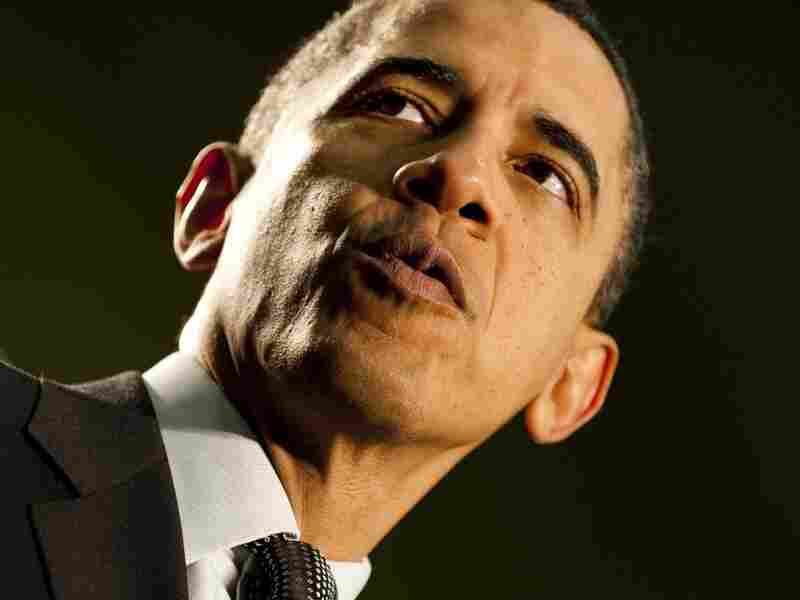 President Barack Obama speaking in Ohio last week. Obama has stated that the well-being of American citizens is his top priority, but some feel that he should be doing more to curtail the bloodshed in Libya. Jim Watson /AFP/Getty Images hide caption 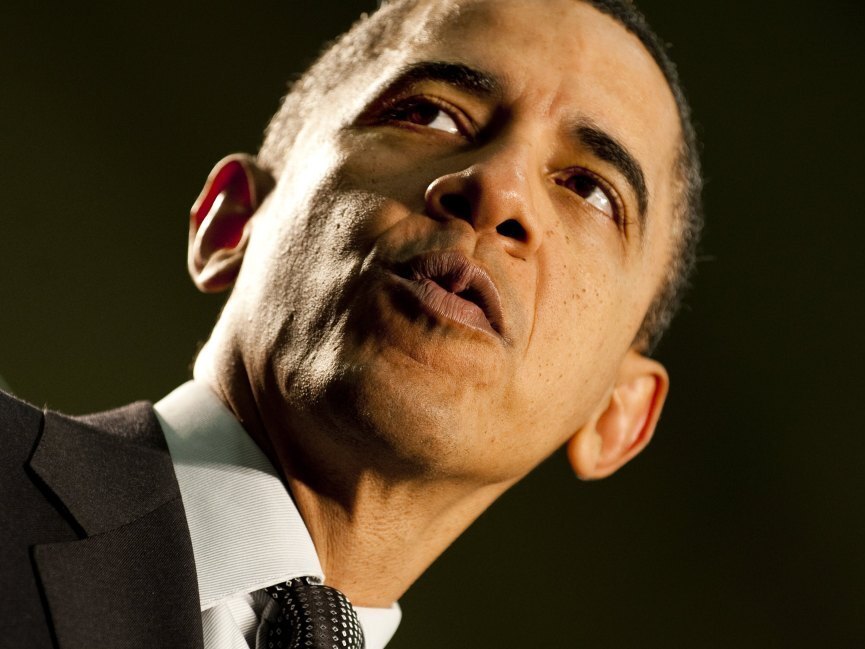 President Barack Obama speaking in Ohio last week. Obama has stated that the well-being of American citizens is his top priority, but some feel that he should be doing more to curtail the bloodshed in Libya.

William Kristol is editor of The Weekly Standard.

At last Wednesday's White House briefing, CNN's Ed Henry asked new flack Jay Carney why it had taken President Obama so long to speak out about the violence in Libya.

"The president puts out statements on paper sometimes," Carney explained.

Later that day, the president did speak viva voce. He began with this assurance: "First, we are doing everything we can to protect American citizens. That is my highest priority." This echoed his secretary of state from the day before: "The safety and well-being of Americans has to be our highest priority."

Really? The safety and well-being of Luxembourgers abroad is (perhaps) the highest priority of the government of Luxembourg. But Luxembourg is not a great power. The highest priority for the government of the United States has to be to defend and advance the core foreign policy interests of the United States. And in the case of the Libyan uprising, the passivity of the Obama administration has damaged America's interests and standing around the world.

Now, we don't dismiss the importance of attending to the well-being of Americans abroad. Needless to say, the government is right to be concerned about our diplomats, their family members, and other Americans in Libya. Indeed, it might have been a good idea to deploy assets other than a pathetic rented ferry that couldn't handle choppy waters to get them out of there. And of course, the Obama administration should have made it clear, and should continue to make it clear to all concerned in Libya, what consequences would follow to anyone who harms Americans or impedes their departure.

Still: The attitude that, in a crisis like this, "The safety and well-being of Americans has to be our highest priority," tends to render the United States mute and impotent. The mere presence of Americans in a foreign country in turmoil becomes an excuse for inaction.

But a great power need not render itself powerless. There are plenty of things the Obama administration could have been doing, and could be doing, to influence the situation in Libya. A vocal defense of liberty, support for governments that enjoy the consent of the governed, and forceful condemnation of the crimes Muammar Qaddafi is now perpetrating against his people would be a start. And there are many policy options available to the president. In conjunction with our NATO allies, he can send more naval assets to the Mediterranean. He can establish a no-fly zone over Libyan airspace and consider other forms of military and covert action. He can direct the Treasury to freeze the assets of the Libyan government and the Qaddafi family. He can establish lines of direct humanitarian aid to the population. He can consider halting the importation of Libyan oil into the United States. These and other such actions would not be without risk or cost. But they would put the United States squarely on the side of an oppressed people against a terrorist-friendly dictator. And they would increase the likelihood that the crisis is resolved quickly with the overthrow of Qaddafi, and without any further crimes against humanity or the dissolution of Libya into civil war.

Indeed, the dithering of the Obama administration has raised a more fundamental question: Have our elites — and not just those running the Obama administration — become so encumbered by self-doubt, so weakened by sophistication, so seduced by the excuses provided by the claim of helplessness, that they are incapable of acting decisively? Once Americans tried to seize every moment of opportunity. Now we are far more likely to stand back and watch history unfold, while explaining why we can't do anything to shape that history. After all, our foreign policy establishment explains condescendingly, the challenges are daunting. So many forces are beyond our control. The risks are great. The obstacles are overwhelming.

There is another word for this widespread attitude of passive self-doubt. That word is decadence.

Last week's farcical ferry, bobbing aimlessly in the waters off Tripoli, was an image for our government's embrace of helplessness, for its acceptance of decline. It recalled the downed helicopters in Iran in early 1980, emblems of the failed Carter administration. But at least President Carter sent helicopters. In so doing he overruled his secretary of state, who wished to do nothing. So far, this president is performing in this crisis at a sub-Jimmy Carter level of assertiveness and command.

It doesn't have to be this way. Obama is the same president, after all, who rejected counsels of defeatism in Afghanistan and surged troops into theater, where we are now making remarkable progress on the battlefield — and even beginning to see political progress. There is also, lest we forget, the recent example of the successful surge in Iraq, a policy implemented when sophisticates across the globe counseled American retreat.

Self-doubt and paralysis are not only problems for the Obama administration. Mike Huckabee is a frontrunner for the Republican presidential nomination. Last Wednesday, as President Obama was waxing ineffectual in the White House, Huckabee met with journalists a few blocks away at the St. Regis Hotel. Someone asked him about the war in Afghanistan. "What does the endgame look like here?" he wondered. "I can't see a conclusion." And Huckabee continued: "You go to Afghanistan and look around and you say, 'My gosh, am I in a country or on the surface of the moon?' "

Well, let's answer Huckabee's question: The attacks of Sept. 11, 2001, did not come from the surface of the moon. They came from a country called Afghanistan. There are people living there, people who threaten us. And there are other people living there, men, women, and children who deserve a better life and a respite from chaos. And, not incidentally, more than a hundred thousand American soldiers and Marines are fighting there too. Is it really appropriate for a man who would be commander in chief to indulge in cheap throwaway lines about such a place?

In the final analysis, we suppose, Huckabee's musings on the fate of Afghanistan really don't matter. But it does matter when, among political leaders in both parties, cleverness replaces seriousness, and ducking responsibility becomes an art form.

One sees today across America, often within the same parties and institutions and even individuals, two tendencies at work, two forces competing for dominance: a decline into cynicism and decadence, and a surge toward responsibility and renewal. In this respect, Libya and Afghanistan — and for that matter the showdown in Wisconsin and the budget battles on Capitol Hill — are not simply separate events. They are different scenes in an ongoing drama. It's a drama nicely summed up in that wonderful playground taunt: "Are you a man or a mouse? Squeak up."