Accessibility links
High-Tech Rearview Mirror Curbs Blind Spots Nearly 300 people die each year when hit by vehicles that are backing up. A Michigan company has designed a rearview mirror with an embedded video display. 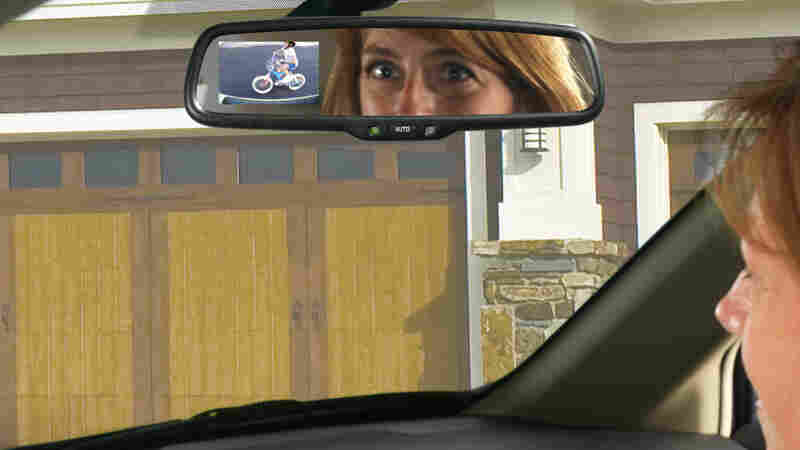 Gentex Corp.'s rearview mirror camera display enables drivers to see objects and people behind the vehicle using a tiny camera mounted to the back of the car. Courtesy of Gentex Corp. hide caption 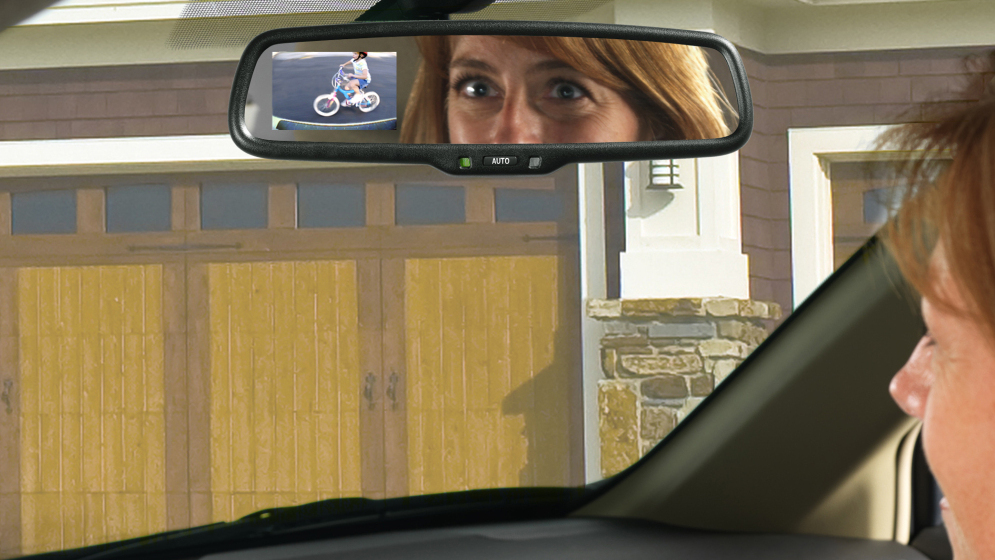 Gentex Corp.'s rearview mirror camera display enables drivers to see objects and people behind the vehicle using a tiny camera mounted to the back of the car.

A rearview mirror doesn't seem like a high-tech device, but a Michigan company has designed one with an embedded video display. The device helps drivers see people or objects in their blind spots using a tiny camera mounted to the back of the car.

To address the problem, Gentex Corp., based in the small town of Zeeland, Mich., makes mirrors called a rear camera display. Using them is like looking at a TV and seeing a picture within the picture.

The 3.3-inch-diagonal LCD display is very bright and has high resolution because it's backlit by 80 white LED lights. This built-in screen displays the picture of what's behind the vehicle using a tiny camera mounted on the back of a vehicle.

Gentex has years of experience putting high-tech features into low-tech mirrors. For example, it's been making rearview mirrors that automatically dim for nighttime driving for more than 20 years.

Watch a Gentex video about how the technology works.

All of those electronics have made rearview mirrors more costly. Gentex says the rear camera display mirror can cost automakers around $75 per vehicle. Normal mirrors — without the high-tech features — cost carmakers less than $10.

I put Gentex's new display mirrors to the test in an Acura sedan.

With a standard rearview mirror, I can't see 32-inch cones that are more than 20 feet behind me because they're in a blind spot. I also can't see a little bike that is 15 feet behind me.

"So, if there was a child on that bike, riding by you as you started your car in the morning to back up for work you would not see that little kid behind your car," says Craig Piersma, the director of product marketing for Gentex.

New Car Technology Tells Tailgaters To Back Off Jan. 31, 2011

Next, I do the test with the video display in the mirror.

When I put my foot on the brake and put the car in reverse I see a little pink bike in the mirror. It's only about half an inch tall in the screen. But I can make it out the instant I put the car in gear.

David Champion, the senior director of Consumer Reports' auto test division, says the mirrors are a promising safety advancement. But he warns that the camera location can make all the difference. That's because automakers have control over where to place the camera on the rear of the vehicle.

"Some people put it sort of underneath the lip of the trunk lid above the license plate, which seems to collect a lot of dirt in that area," Champion says. "Especially in these winter conditions where you have muck on the road and it sprays up, that reduces the visibility tremendously of what you can see behind."

Gentex has been shipping the rear camera display mirrors to carmakers for nearly four years. This month, it's shifting manufacturing operations to a new plant down the street to accommodate an expected boom in the high-tech-mirror business.

That's because NHTSA is getting involved. It's now reviewing comments from safety groups, businesses and drivers across the country about proposed changes to require all new cars to have some sort of rearview camera display by 2014.