Accessibility links
Kabul Bank Needs $900 Million Bailout Afghanistan's Kabul Bank needs a bailout that may top $900 million because of bad loans made to friends and relatives of high-ranking Afghan government officials. Of course, with little revenue of its own, an Afghan government bank bailout would mean more money from the United States. 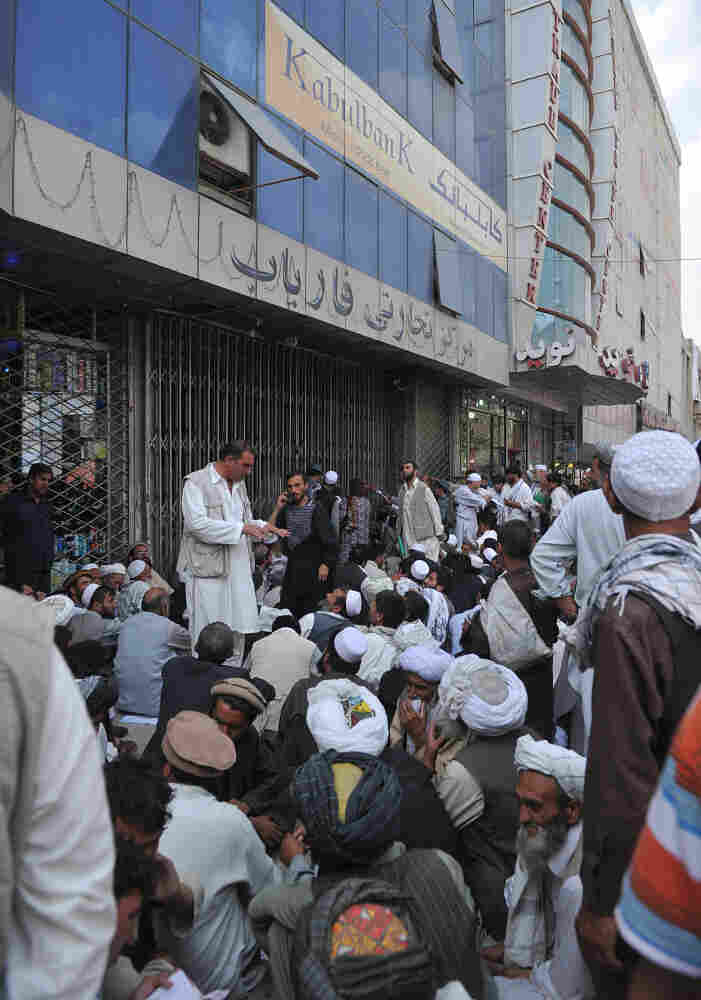 Men stand before the main branch of the Kabul Bank in Kabul on Sept. 5. Branches of the Afghan bank were crowded with government employees waiting to be paid and customers who wanted to withdraw their money following corruption allegations. Massoud Hossaini/AFP/Getty Images hide caption 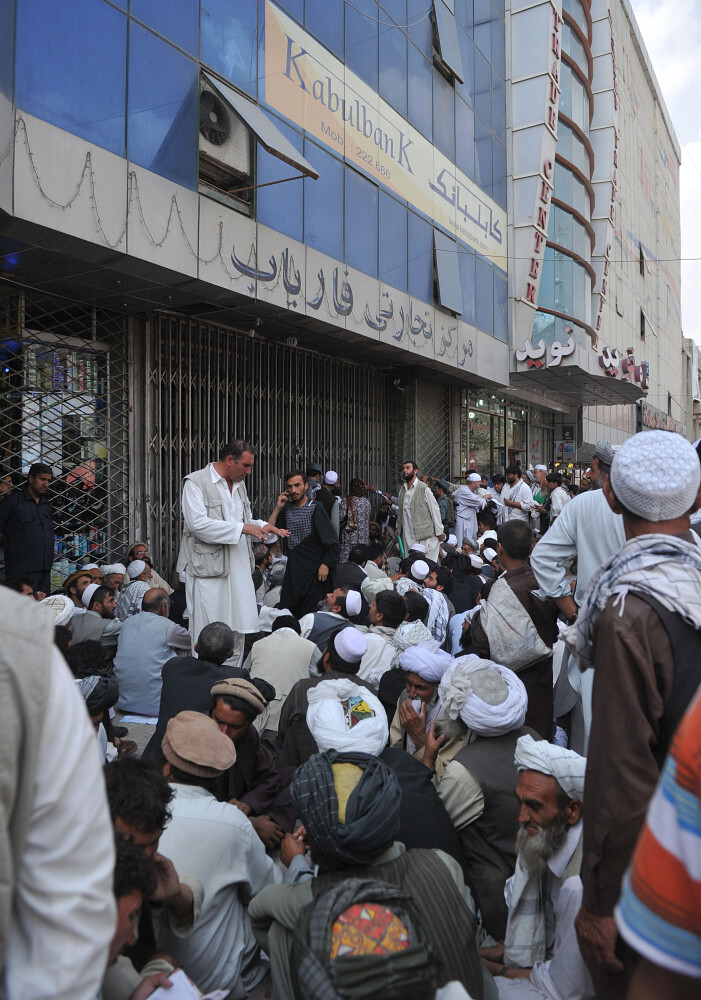 Men stand before the main branch of the Kabul Bank in Kabul on Sept. 5. Branches of the Afghan bank were crowded with government employees waiting to be paid and customers who wanted to withdraw their money following corruption allegations.

Afghanistan is rated by Transparency International as the third most corrupt country in the world. But that does not seem to be affecting U.S. aid to Afghanistan, which continues to grow.

The white whale of graft is Kabul Bank, which needs a bailout that may top $900 million because of bad loans made to friends and relatives of high-ranking Afghan government officials.

Of course, with little revenue of its own, an Afghan government bank bailout really means a bailout by the international community, and more money from the United States.

At a main branch in downtown Kabul, the bank appears to be doing business as usual, albeit with fewer customers than before. Tellers in shiny suits, each sitting behind a mechanical money counter, greet customers. Nothing here indicates that the bank is insolvent, or that it's at the center of Afghanistan's biggest corruption scandal.

Azarakhsh Hafizi of the Afghan Chamber of Commerce says Kabul Bank gave 1.3 million Afghans the chance to take their money out of their mattresses and enter the modern world of savings accounts and even ATMs.

"Kabul Bank was one of the successful [businesses] in Afghanistan," he says.

Deposits from widows, soldiers and young Afghans earning a few hundred dollars a month gave the bank $1 billion in assets, which Hafizi says should have been used to invest in Afghan industries.

Kabul Bank was a symbol of faith in the new Afghanistan, says Hafizi, but that trust is now in tatters.

The news first broke last fall that hundreds of millions of dollars' worth of bad loans would probably not be paid back. There was a run on the bank, with long lines of angry customers, and the government stepped in.

Soon after, stories about who had received the loans trickled out — some of them in U.S. Embassy cables released by WikiLeaks. Shareholders — including the brother of Afghan Vice President Mohammad Fahim and President Hamid Karzai's own brother Mahmood — appear to have lent themselves huge amounts.

The question is how to get them to pay it back. A number of corruption probes are under way, including a grand jury investigation in the United States of Karzai's brother.

Analysts in Kabul doubt Karzai will allow any of his few remaining political allies to be taken down, but they also wonder whether the U.S. Congress can stomach a billion-dollar bailout for Karzai's friends and relatives.

It may have little choice if it wants to save the Afghan state, says Mustafa Kazem, a Kabul businessman.

"As an Afghan-American and a U.S. taxpayer, my immediate response is: 'Where are my taxpayer dollars going to?' " he says. "But just as we did, I think, with the banking or the financial sector in America, I think decisions were made on who you bail out and how you intervene, to make sure something greater doesn't happen."

If the banking system goes down, the Afghan government might go with it, he says. Kabul Bank and one other large bank hold 50 percent of the country's assets, and all the government payroll goes through Kabul Bank.

The crisis may soon come to a head. An International Monetary Fund delegation visited Afghanistan in mid-February and returned a stern verdict, demanding prosecutions and the return of missing assets.

Until the IMF gives the country a clean bill of health, many donor nations are legally prohibited from giving more money to Afghanistan. But not the United States, which is expected to underwrite the majority of any bailout.

Following the airing of this piece and its appearance on the Web, the Treasury Department made the following comment: "Deputy Treasury Secretary Neal Wolin has made clear — on the record — that no American taxpayer funds will be used to support Kabul Bank. This point was reinforced during his Feb. 17 meeting with President Karzai."