Accessibility links
Libyan Rebels: Oil Will Keep Flowing, 'No Problem' As unrest continues in Libya, rebels in the east now say they control most of supplies of the world's 12th-largest oil exporter. They've vowed to keep the oil flowing even if Col. Moammar Gadhafi clings to power in the capital. 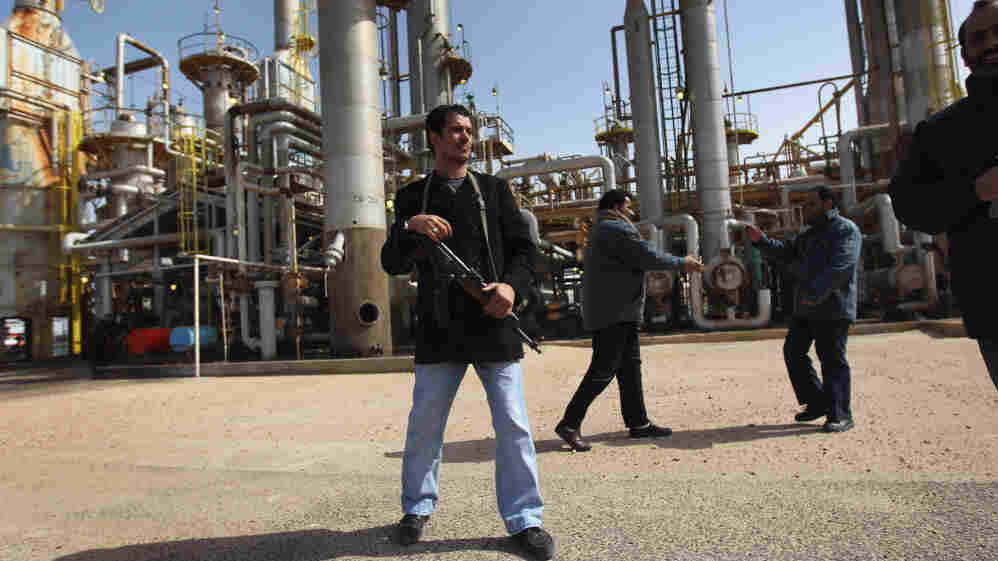 A militiaman stands guard at a Libyan oil refinery in the rebel-held territory of al-Brega on Feb. 27. The opposition leadership has stressed that oil facilities in areas under its control are safe, despite the conflict roiling the country. John Moore/Getty Images hide caption 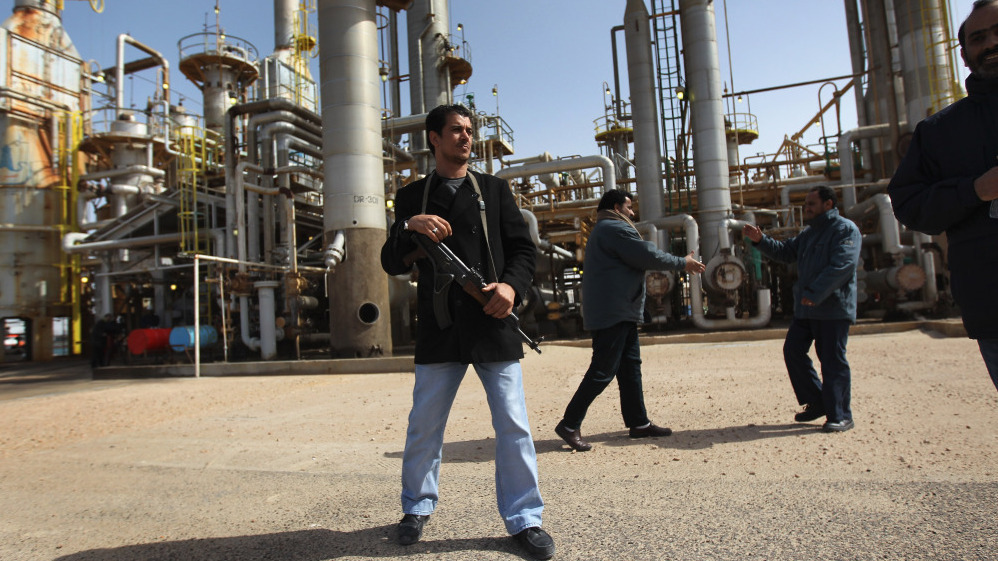 A militiaman stands guard at a Libyan oil refinery in the rebel-held territory of al-Brega on Feb. 27. The opposition leadership has stressed that oil facilities in areas under its control are safe, despite the conflict roiling the country.

Rebels in the east of Libya now say they control most of the oil facilities in the world's 12th-largest oil exporter. And they've vowed to keep the oil flowing even if leader Moammar Gadhafi clings to power in the capital.

Oil prices have climbed sharply on fears that the unrest in the region could crimp crude supplies.

A refinery of the Libyan National Oil Co. in the eastern city of Tobruk, which is now in the hands of the opposition, appears to be functioning normally.

The port at the oil depot in Tobruk reopened over the weekend for the first time since the Feb. 17 uprising. On Monday, one oil tanker loaded with 1 million barrels of crude oil was bound for China and another was waiting in the harbor. The second vessel is scheduled to ferry 600,000 barrels of oil to Italy.

Rajab Sahnoun, the superintendent of the facility, says the tankers are a sign that everything is getting back to normal. And he says the plant will continue to operate at or near its regular capacity.

"We can continue no problem," he says. "We have experience. We will supply the oil for everywhere, no problem."

Sahnoun says there have been some delays because tankers weren't docking last week, but crude oil continues to arrive through a pipeline at what he calls a "normal" flow. Tobruk is the spigot to the world for Libya's largest oil field, Sarir, which sits about 300 miles south of Tobruk in the desert. Sarir has the capacity to pump 230,000 barrels of oil a day.

Normally Libya's daily oil output is roughly 1.5 million barrels. It's unclear how much of that production has been disrupted by the unrest.

Most foreign oil companies, including BP, Exxon Mobil and Total, have evacuated all of their foreign employees. But Sahnoun says this doesn't affect his facility.

"No. No. No. We don't deal with BP and others," he says. "This is national company. ... All the manpower is Libyan; all the engineers, operators is Libyan."

And while this is a "national" oil facility, rebels now control it. The red, black and green flag that's become the symbol of the revolution flies from the guard post. Sahnoun says he now reports to the opposition leaders in Benghazi.

The facility has huge storage tanks for crude oil, two docks to load seagoing tankers, a refinery, an electrical power plant and a natural gas processing unit. Except for the tanker delays Sahnoun says all of this has continued to function even during the Feb. 17 uprising.

Libyan Army Col. Ibrahim Omar Al-Mnffi used to be in charge of security for the oil facilities in the east of the country for Gadhafi. But he defected after the uprising and now does exactly the same job for the rebels.

He points to a map that shows the major petroleum fields, refineries and pipelines in Libya and says the opposition now controls all of these.

The colonel says he and his men joined the rebels to free Libya from a dictator. He says another army unit in the west that's switched sides now controls most of the oil facilities in the other half of the country.

However, another rebel commander told reporters that Sunday pro-Gadhafi forces recaptured a key oil terminal at Ras Lanuf, west of the rebel stronghold of Benghazi.

The commander said Gadhafi sent reinforcements to the terminal Monday. It is also the site of a large refinery.