U.N. Acts Against Libya As U.S. Warns Of Civil War

U.N. Acts Against Libya As U.S. Warns Of Civil War 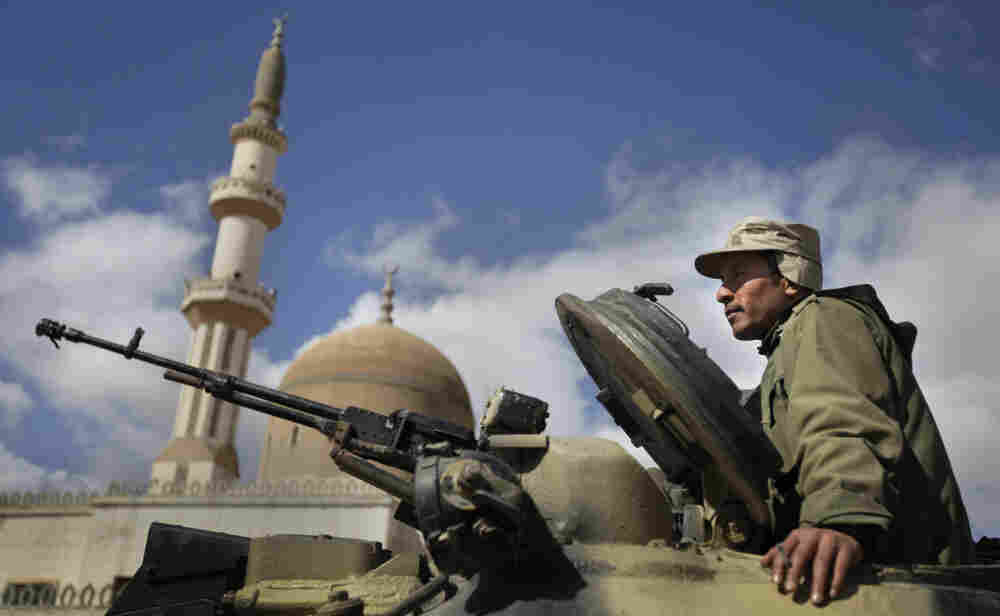 A pro-Gadhafi Libyan soldier sits in an armored vehicle next to a mosque in Qasr Banashir, southeast of Tripoli, on Tuesday. Ben Curtis/AP hide caption 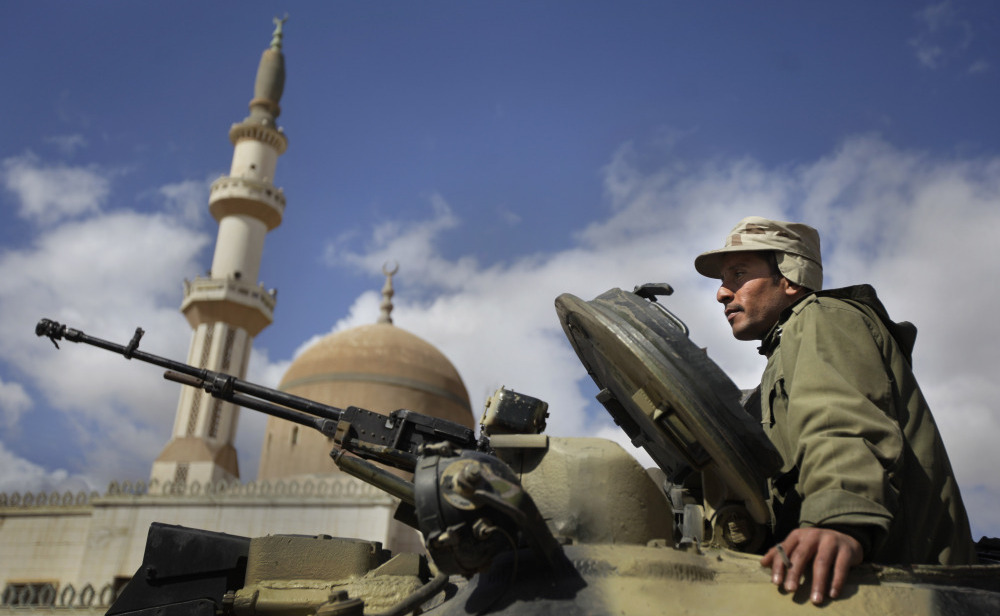 A pro-Gadhafi Libyan soldier sits in an armored vehicle next to a mosque in Qasr Banashir, southeast of Tripoli, on Tuesday.

The diplomatic maneuvering came against a background of continuing crisis in Libya, where rebels reportedly fought off forces loyal to Moammar Gadhafi to keep control of a city near the capital.

Loyalist troops armed with tanks, machine guns and anti-aircraft weapons attacked the city of Zawiya, which lies 30 miles west of Tripoli, from six directions but were repelled by the opposition, witnesses said Tuesday. There was no word on casualties.

The assault was similar to an attempt Monday night by pro-Gadhafi forces to retake Misrata, Libya's third-largest city. Rebel forces there also managed to thwart the regime's offensive.

Gadhafi, Libya's ruler of 41 years, has already lost control of the eastern half of the country since protests demanding his ouster began two weeks ago. He still holds the capital Tripoli and nearby cities.

'The Entire Region Is Changing'

Clinton told the Senate Foreign Relations Committee on Tuesday that in the years ahead, "Libya could become a peaceful democracy, or it could face protracted civil war, or it could descend into chaos.

"The stakes are high," she said. "The entire region is changing, and a strong and strategic American response will be essential."

The U.S. and its allies have sought to isolate the Gadhafi regime, imposing an arms embargo and economic sanctions.

The Treasury Department announced Monday that it had frozen some $30 billion worth of Libyan assets. On Tuesday, Austria and Germany also moved to block assets belonging to Gadhafi and his entourage in line with European Union and United Nations sanctions.

"It's important that he get off the stage," Susan Rice, the American ambassador to the U.N., told CBS' The Early Show.

Rice spoke as U.S. warships deployed closer to Libya to support potential humanitarian and military missions, and after a whirlwind of meetings on Monday between Clinton and foreign ministers in Geneva.

The White House has said "no option is off the table," and Clinton told the Senate committee that a no-fly zone was "under active consideration" to protect rebel-held areas from attack by Gadhafi forces.

Marine Gen. James Mattis, the head of U.S. Central Command, said Tuesday that establishing a no-fly zone over Libya would be "challenging" and would require first knocking out ground-based threats to allied aircraft.

"You would have to remove air defense capability in order to establish a no-fly zone, so no illusions here," Mattis told the Senate committee. "It would be a military operation — it wouldn't be just telling people not to fly airplanes."

Russian Foreign Minister Sergey Lavrov called the idea of imposing limits on Libyan airspace "superfluous" and said world powers must instead focus on fully using sanctions that the United Nations Security Council approved over the weekend.

A no-fly zone would require the approval of the 15-member Security Council.

On Tuesday, the U.N. General Assembly voted by consensus to suspend Libya from the U.N. Human Rights Council.

The resolution, sponsored by Arab and African states, accused Gadhafi's regime of committing "gross and systematic violations of human rights."

The vote does not permanently remove Libya from the human rights council, but prevents the country from participating until the General Assembly determines whether to restore Libya to full status.

The U.N. Security Council slapped an arms embargo, a travel ban and assets freeze on Moammar Gadhafi, his family and top associates during an emergency weekend meeting.

As rebels continued to hold ground in western Libya, Gadhafi's regime tried to show that it was the country's only legitimate authority and that it feels compassion for areas in the east that have fallen to the opposition.

A total of 18 trucks loaded with rice, wheat flour, sugar and eggs left Tripoli for Benghazi, the country's second-largest city, 620 miles east of the capital. Also in the convoy were two refrigerated cars carrying medical supplies. The convoy was met with a small pro-Gadhafi demonstration as it made its way out of Tripoli. "God, Gadhafi, Libya and that's it," chanted the demonstrators. 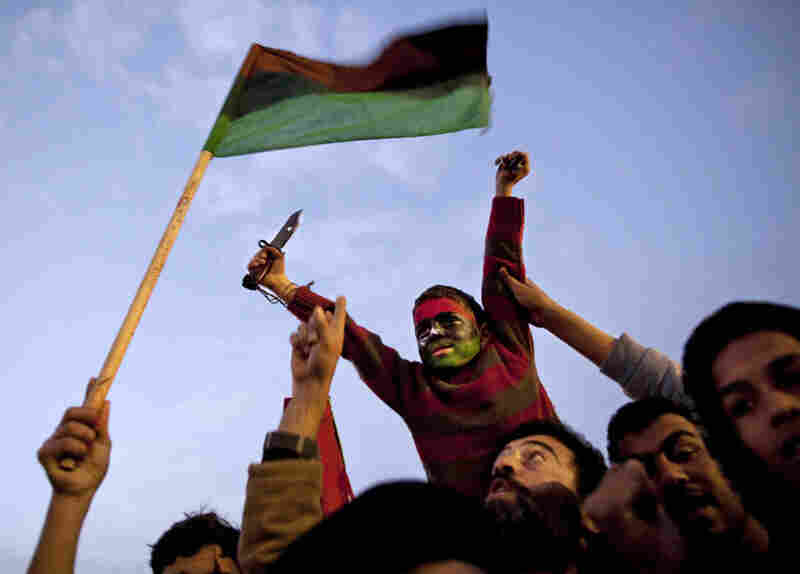 People in the eastern city of Tobruk chant slogans against Libyan leader Moammar Gadhafi during a weekend demonstration against the regime. Kevin Frayer/AP hide caption 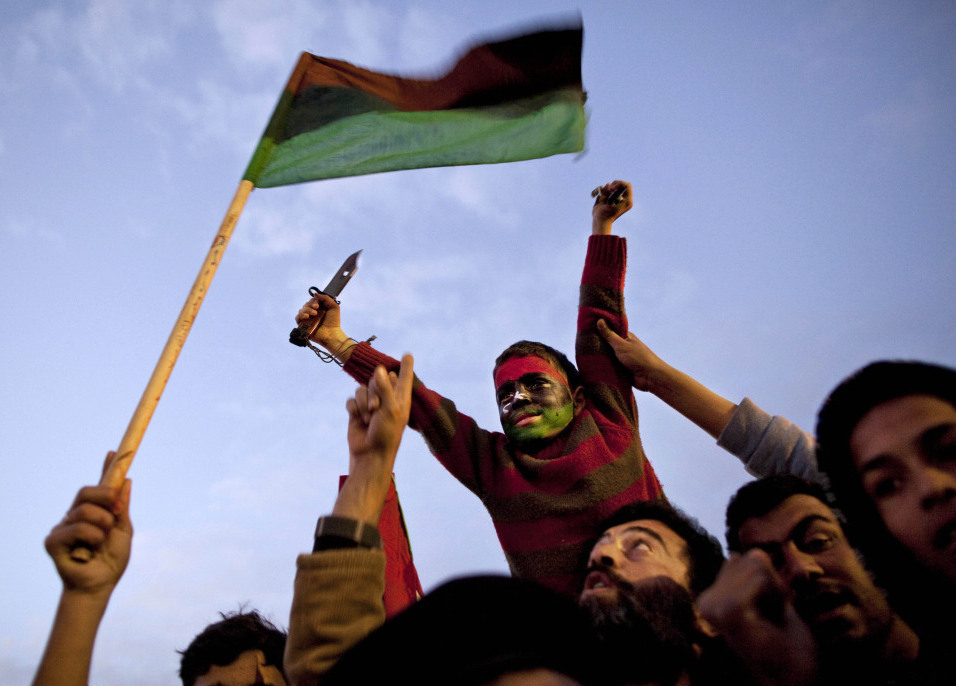 People in the eastern city of Tobruk chant slogans against Libyan leader Moammar Gadhafi during a weekend demonstration against the regime.

"The state is very generous with the people," 22-year-old Ahmed Mahmoud said as he watched the convoy.

Gadhafi has launched the most brutal crackdown of any Arab regime facing the wave of anti-government rebellion that's swept across Northern Africa and the Middle East. But international pressure on Libya to end the violent repression of protesters has escalated dramatically in the past few days.

In an interview with NPR, Clinton said sanctions were targeted as much at Gadhafi's family members, close allies and business partners as at the strongman himself.

"They have to know that there's a price to pay," the secretary of state said Monday, adding that those who continue to support the Libyan leader could "be at risk physically and financially."

She acknowledged that the U.S. is "very conscious" of the uncertainty of a post-Gadhafi Libya. "We're worried that there isn't any institutional support for what comes next. Unfortunately, [Gadhafi] ... did a quite thorough job of destroying and discrediting all the institutions that you'd expect to see in a state."

Gadhafi laughed off a question from ABC News about whether he would step down as the Obama administration is demanding, saying, "My people love me. They would die for me."

A Geyser Of Anger In The City Of Tobruk

In the city of Tobruk, on the Libyan border with Egypt, frustration toward Gadhafi that had been bottled up for decades because people were terrified to criticize the quasi-socialist regime has come boiling out.

NPR's Jason Beaubien reports that there are anti-Gadhafi protests every day in Tobruk. On Monday night, he said, students were shouting, "Gadhafi is crazy" and calling for the longtime leader to go — a display that would have been unthinkable just two weeks ago, when Gadhafi still controlled the area.

Anwar Hassan, who lives in one of the oldest and poorest parts of Tobruk, shook with anger as he talked about the Gadhafi regime.

"They didn't do nothing except destroying people," he told NPR as a dust storm turned the sky orange and whipped sand across deeply rutted dirt roads in the Al Hatiya neighborhood.

There's no running water in Hatiya, but just over the hill, crude oil flows each day through glistening pipes at one of Libya's largest oil refineries, Beaubien said. Raw sewage runs in gullies in the streets. Multiple families are crammed into crumbling cinder-block houses.

Hassan said Gadhafi has kept Libyans down by terrifying them and giving them just enough food to survive.

"We determined here in Tobruk, and all Libyans determined either die or be free — death or freedom. And we will be free," he said.

The imam at the local mosque, Mahmoud Nasif Abdel-Hamid, said it was impossible even for a religious man to speak out against the government prior to the uprising in Libya.

"In each mosque, in all of Libya, the government asks before each sermon, what we will say, and had I said anything against them I would've been taken away," Abdel-Hamid said.

Last week, the imam said, for the first time in his life he spoke out against the Gadhafi regime during Friday prayers. And in his sermon, Abdel-Hamid denounced the government attacks on protesters, citing Islam's prohibition against killing fellow human beings.

With reporting from NPR's Jason Beaubien in Tobruk, Libya; Michele Kelemen in Geneva; and Tom Bowman in Washington, D.C. This story also contains material from the Associated Press.