Accessibility links
New Republic: DOMA Decision Was Bold And Lawful The Obama administration announced last week that it would no longer support the Defense of Marriage Act (DOMA), a decision that former House Speaker Newt Gingrich called "unconstitutional" since a president shouldn't personally suspend a law. But Walter Dellinger of The New Republic argues that Obama's decision is entirely within reason. 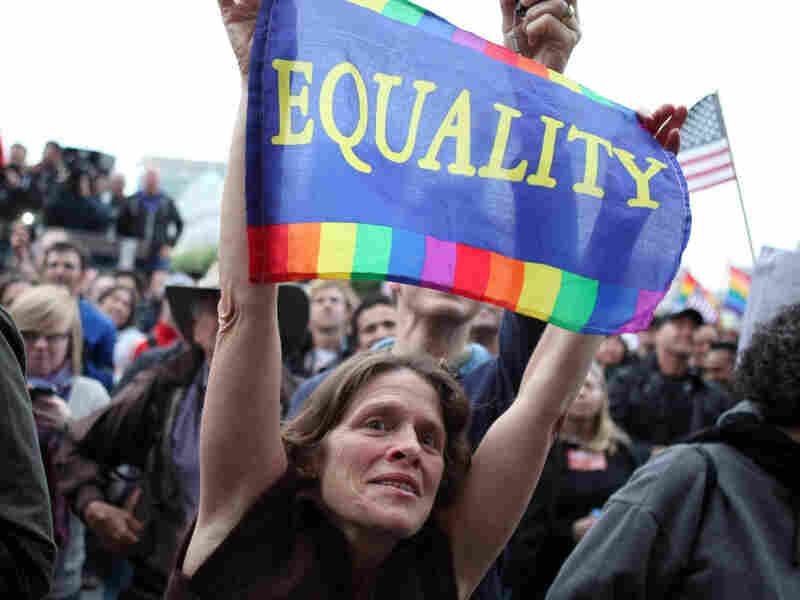 A woman holds a sign during a rally to celebrate the ruling to overturn Proposition 8 in San Francisco, California in 2010. Last week, the Obama administration announced it would no longer support the Defense of Marriage Act (DOMA). Justin Sullivan/Getty Images hide caption 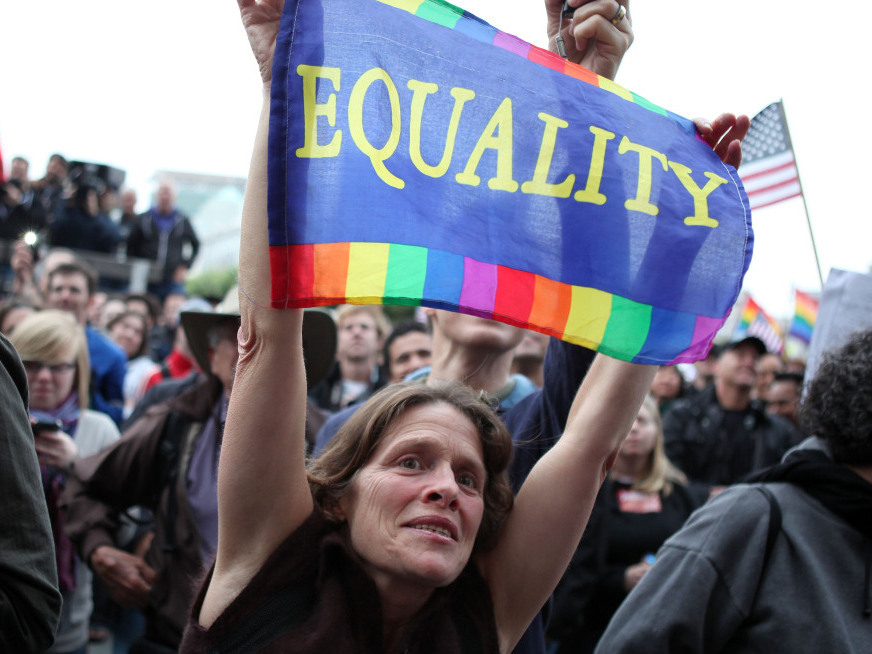 A woman holds a sign during a rally to celebrate the ruling to overturn Proposition 8 in San Francisco, California in 2010. Last week, the Obama administration announced it would no longer support the Defense of Marriage Act (DOMA).

Walter Dellinger is a partner at O'Melveny & Myers, LLP in Washington, D.C.

I had thought that everything useful had already been said about the president's determination that the Defense of Marriage Act (DOMA) could no longer be defended. Then, I saw the statement by former Speaker of the House Newt Gingrich. He said that the Obama administration "didn't understand the implication that having a president personally suspend a law is clearly unconstitutional" and urged Congress to defund the Office of the Attorney General unless the president reverses his decision.

That statement, from a leader possibly on the cusp of declaring his candidacy for the presidency, is so far off the mark that it calls out for additional clarification about exactly what the president and the attorney general did — and did not — do.

There are a few, narrow circumstances in which a president is justified in announcing a unilateral decision that he will not comply with a law he believes to be unconstitutional. This is not such a case. Here, the president has decided to comply with the law and leave the final decision of its constitutionality to the courts, a course of action that respects the institutional roles of both Congress, which passed the law, and the judicial branch.

This is not to say that Obama's decision was anything less than bold. While such an action is not unprecedented (the Clinton administration announced it would not defend a law ousting all HIV-positive individuals from the military), it's only been about once a decade since World War II that the executive branch has declined to defend an act passed by Congress.

Why is that action justified here? In large measure, it was driven by the unacceptability of the arguments that the government would otherwise have had to make in DOMA-related cases in which filings will soon be due. Those who have criticized the decision not to defend DOMA — a group that includes even some who favor same-sex marriage, like former Solicitor General Charles Fried — have given too little consideration to what a brief defending the law would have to say, and what a brief declining to defend could say instead.

The next brief the government would have had to file in DOMA litigation, were it defending the law, would have been in the Second Circuit, and the question that court would have had to address for the first time is the level of judicial scrutiny that should be accorded discriminations based on sexual orientation. Although the issue seems technical — should "rational basis" or "heightened scrutiny" be applied — it in fact addresses very profound questions about the role of sexual orientation in our culture.

Here is a common language, common sense version of the issue: Courts generally assume that the distinctions legislatures make between one group and another are validly based on criteria that go to genuine merit. Courts don't second-guess legislatures about the decision to base laws on such distinctions. Such laws are assumed to be the result of a fair-minded process and based on appropriate considerations. If such a distinction looks "rational" to a court, that is close enough for government work.

A few distinctions — notably race, religion, and gender — have been subject to heightened scrutiny by the courts. The reason for the courts treat such distinctions with skepticism is because they have each been (mis)used historically as a basis for legislation even though they are not good indicators of merit and have little relation to legitimate policy objectives. Such distinctions are often employed by legislatures because of bias or hostility against a group that has historically be subject to discrimination. Thus, judges are supposed to view these distinctions skeptically in order to identify instances in which such discriminations are based on bias rather than merit.

Into which category should sexual orientation discrimination be placed — those needing only a rational basis or those subject to heightened scrutiny? That would have been the issue facing the Justice Department in the next brief to be filed. The problem was not simply that the president and the attorney general had constitutional doubts about DOMA — that is true of a lot of laws that the department sucks it up to defend. The problem was that to mount the fullest defense of DOMA, the government would have to argue against subjecting the law to heightened scrutiny. And, to make that argument, it would have been necessary to urge the court to accept two propositions that are profoundly wrong: the notion that distinctions based upon sexual orientation are generally sound judgments based on merit, and the assumption that bias or hostility was unlikely to have played a role.

I don't believe that any administration is obliged to urge a court to accept propositions that the president believes are fundamentally wrong, as surely these propositions are. The far better course was to make this one of those rare instances in which the government gives the court its honest view on fundamental questions, even if those views could lead to the law being invalidated. And that's exactly what the administration did: Because of Obama's decision last week, the government will issue a brief setting out its view that DOMA is unconstitutional.

Obama's decision was honest, transparent, and respectful of the rule of law. The briefs the administration will file on this issue going forward will give the court the benefit of the Justice Department's best thinking. At the same time, the government will not be "pretending" or "purporting" to support the law — and, thus, the judges will know to look elsewhere for the most all-out, no-holds-barred defense of the law in question.

It is easy to sit on the sidelines and say that the government should always "defend the law." But those who would defend this law, perhaps including even the House leadership, will find that doing so requires them to argue that discrimination against individuals or couples on the basis of their sexual orientation is generally reflective of merit, not bias. The courts ought to hear that view from someone, but it should not be from this president and his law officers.

The judiciary will be exposed to all the best arguments on both sides of this question, and, in the end, it will make the final decision about DOMA's constitutionality. But make no mistake about the importance of what Attorney General Holder and President Obama have done: They have placed the executive branch of the government of the United States firmly behind the proposition that discrimination based on sexual orientation is wrong. History will be kind to this decision.