Accessibility links
Remembering Suze Rotolo, Dylan's 'Freewheeling' Muse Suze Rotolo, who strongly influenced Bob Dylan's songwriting and walked beside him on the album cover for The Freewheeling Bob Dylan, died of lung cancer on Friday. She was 67. Fresh Air remembers Dylan's muse with excerpts from a 2008 interview. 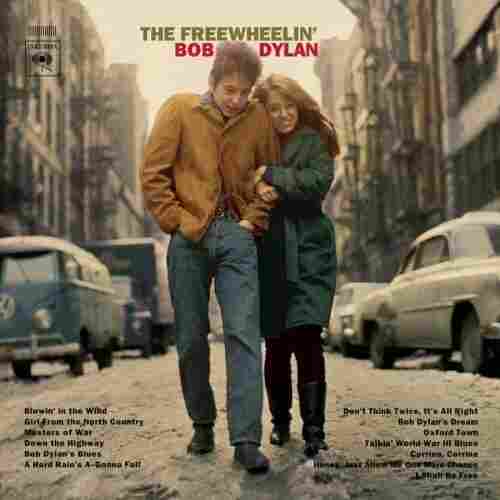 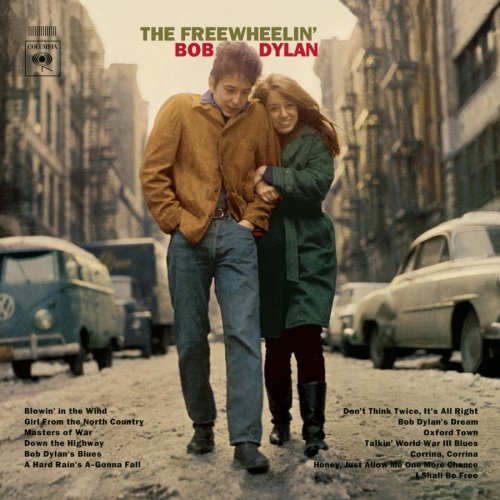 Suze Rotolo, who strongly influenced Bob Dylan's songwriting and walked beside him on the album cover for The Freewheeling Bob Dylan, died of lung cancer on Friday. She was 67.

Rotolo, an artist and teacher, grew up in Queens. She began dating Dylan in the early 1960s, after meeting him at a marathon folk-music concert at the Riverside Church in New York City. She was 17 at the time.

In 2008, she wrote about her relationship with him in a memoir, A Freewheelin' Time: A Memoir of Greenwich Village in the Sixties, and joined Terry Gross for a conversation about their relationship, Dylan's music and the 1963 photo shoot for the Freewheeling album cover, where she was pictured walking arm-in-arm with Dylan down a partially snow-covered New York City street.

"It was very casual, completely unplanned and it was freezing outside," she said. "Bob just took this thin suede jacket that wasn't good for a New York cold winter day, and I had on a couple of sweaters ... and I threw a coat on top. I always look at that picture [and] I feel like an Italian sausage because I had so many layers on, and he was freezing and I was freezing and had more clothes on. It was very cold that day."

Though the album cover became iconic, Rotolo said she had little idea how it would change her life.

The Best Opening Tracks Ever?

Tangled Up In School: Teaching Dylan In Boston

"I don't think anyone who had anything to do with it thought it would have such an enormous impact," she said. "It became something that was my identifier, but it wasn't my identity. ... So [as] it became an iconic album, the more I could detach from it and just look at it [and think], 'Okay, that's what that is.' But it was an odd feeling for many years."

In 1962, Rotolo left for Perugia, Italy, for eight months. Her separation from Dylan — who didn't want her to go — inspired the songs "Tomorrow Is a Long Time," "Don't Think Twice, It's All Right" and "Boots of Spanish Leather."

When Rotolo returned, the reception in Greenwich Village was not friendly. A lot of people thought she'd been cold and indifferent to leave Dylan for so long, and many folksingers on the scene deliberately sang songs that Dylan had written about his heartache whenever Rotolo was around.

"I've always been a shy person, so to have this relationship kind of thrown right out there in public was very horrible," Rotolo said. "I didn't go broadcasting things around, and yet people seemed to know how I had made him suffer. Publicly, he was letting that out. But I see that that was just his way of working through it, making it part of his art. But at the time, I just felt so exposed. It was awful."

Slowly, Rotolo and Dylan began to move apart. In August 1963, she moved out of their apartment in the Village while Dylan began spending more time on the road.

"I just felt that that I no longer had a place in this world of his music and fame," she said. "I felt more and more insecure, that I was just this string on his guitar; I was just this chick. And I was losing confidence in who I was. And also, the more famous he got, there were more pressures on him; and, of course, there's all these women that were running around, and so it became something I didn't like being involved in anymore. I saw it as a small, cloistered, specialized world that I just didn't belong in."

Dylan began dating Joan Baez, who was performing with him on the road. In 1967, Rotolo married Enzo Bartoccioli, a film editor she'd met in Italy. They had a son, Luca.

Rotolo taught at the Parsons School of Design in New York. She is survived by her husband and son. 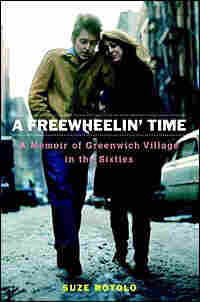 I met Bob Dylan in 1961 when I was seventeen years old and he was twenty. This book is a memoir of my life as it intertwined with his during the formative years of the 1960s.

I've always had trouble talking or reminiscing about the 1960s because of my place close to Dylan, the mover and shaper of the culture of that era. The kind of adulation and scrutiny he received made that conversation awkward for me. He became an elephant in the room of my life. I am private by nature, and my instinct was to protect my privacy, and consequently his.

I was writing a bit before we met--poems, little stories, observations--and I kept at it while I was with him. The writings served the same purpose as the sketchbooks I kept--except that these were verbal drawings:

It isn't you baby, it's me and my ghost and your holy ghost.

There is a saying about one's past catching up with them

mine not only did that, it overran the present.

So tomorrow when the future takes hold

I'll be sitting in the background with the Surrealists.

Though I no longer remember what triggered those thoughts, recorded in January 1963, reading them in the present gives me an eerie feeling of prescience. In so many ways my past with Bob Dylan has always been a presence, a parallel life alongside my own, no matter where I am, who I'm with, or what I am doing.

Dylan's public, his fans and followers, create him in their own image. They expect him to be who they interpret him to be. The very mention of his name invokes his myth and unleashes an insurmountable amount of minutiae about the meaning of every word he ever uttered, wrote, or sang.

As Bob Dylan's fame grew so far out of bounds, I felt I had secrets to keep. Though I kept my silence, I didn't relish being the custodian of such things. Time passes and the weight of secrets dissipates. Articles are written and biographies are churned out that trigger memories only because they are often far from the reality I knew. They tend to be lackluster yet fascinating in their fantasy. I acknowledge that memory is a fickle beast. Fragments of stories stride in and out; some leave traces, while others do not. Secrets remain. Their traces go deep, and with all due respect I keep them with my own. The only claim I make for writing a memoir of that time is that it may not be factual, but it is true.

In these times, seeing Bob Dylan's life and work and the people he was close to documented or fictionalized on film, on display in museum exhibits and other commemorations in all categories, only intensifies the feeling I have of possessing a parallel life. It is an odd sensation to see myself on the screen, under glass, and written about in books, forever enshrined and entombed alongside the Legend of Dylan.

When I look at the pictures and hear the songs I also see and hear the story behind them. A still photograph morphs into a home movie and a scrawl on a page evokes a scene in a room or on a street. I hear a laugh coming from somewhere off to the side...

It has taken me many years to allow my parallel lives to converge. But there will always be a space between the image and the reality because ghosts live there and they cannot be contained under glass. Over time I have learned to be more at ease with the holy fascination people have with Bob Dylan. A song, a poem, a book, a film, an exhibit are simply representations of a period, a place, a person. And because memory is the joker in the deck I try not to take the representations of the past too seriously. Life goes on for those who live it in the present. Nostalgia, cheap or otherwise, is always costly.

I see history as a reliquary--a container where relics are kept and displayed for contemplation. So much has been written about the sixties that the more distant those years become, the more mythic the tales and the time seem to be. Facts and statistics are pliable. Truth and accuracy are truly Rashomon- like. Each story is true from the teller's perspective; the weight shifts. My decision to add my relics was not an easy one. Hindsight meddles with memory, after all, so the best I can do in writing about those long- ago years is to try to make them recognizable.

The stories I tell are about my place within that time and about the early years that made me who I was when I migrated from Queens, New York, to Greenwich Village. The backstory has to be considered: where my family came from, who they were, and all the other bits and pieces that make a person whole. I reminisce to the best of my ability.

Since I was born in one of the boroughs of New York City, the concept of coming to the city to find (or lose) oneself doesn't apply. But it was to Greenwich Village that people like me went--people who knew in their souls that they didn't belong where they came from. I was drawn to the Village with its history of bohemia--where the writers I was reading and the artists I was looking at had lived or passed through. Their spirits led the way, showed me the road, and named the place. I got on the subway.

The 1960s were an amazing time, an eventful time of protest and rebellion. An entire generation had permission to drink alcohol and die in a war at eighteen, but it had no voting voice until the age of twenty- one. Upheaval was inevitable. Talk made music, and music made talk. Action was in the civil rights marches, marches against the bomb, and marches against an escalating war in Vietnam. It was a march out of a time, too--out of the constricted and rigid morality of the 1950s. The Beats had already cracked the façade and we, the next generation, broke through it.

Traveling with the past within us, we were ready to roll into the future. It has now become a historical time made up of many personal stories, songs, and sidebars. There are many reliquaries from that era in American life. This is mine.

From A Freewheelin' Time by Suze Rotolo, published by Broadway Books, a division of Random House, Inc. Reprinted with permission. Copyright © 2008 by Suze Rotolo.