Accessibility links
Meditation And Modern Art Meet In Rothko Chapel Mark Rothko didn't live to see the tranquil Houston chapel filled with his art — he committed suicide a year before it opened. But for the past 40 years, the sanctuary has served as a space for personal contemplation, interfaith dialogue and action for human rights. 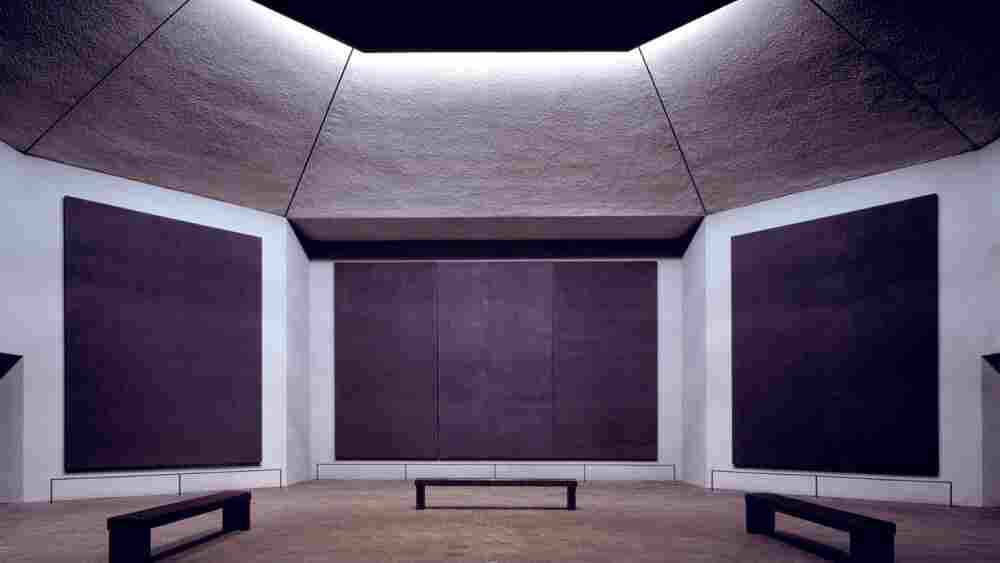 For 40 years, the Rothko Chapel in Houston has served as a space for personal contemplation, interfaith dialogue and action for human rights. The sanctuary was created by Mark Rothko, who committed suicide one year before the chapel opened. Hickey Robertson/The Rothko Chapel hide caption 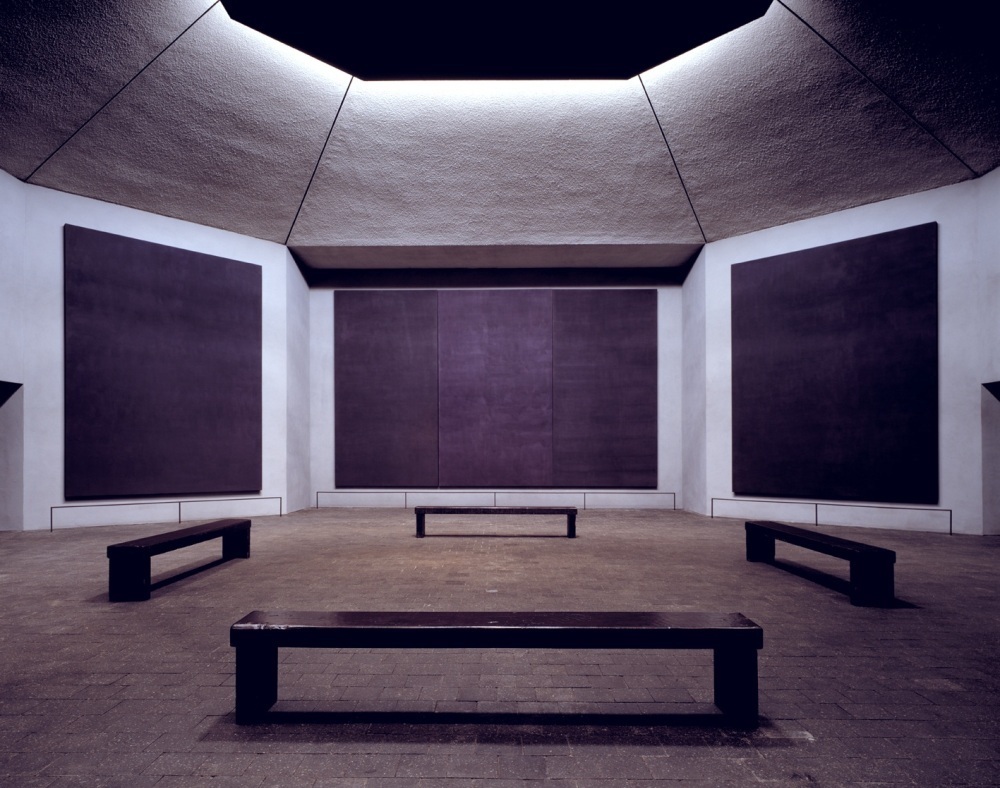 For 40 years, the Rothko Chapel in Houston has served as a space for personal contemplation, interfaith dialogue and action for human rights. The sanctuary was created by Mark Rothko, who committed suicide one year before the chapel opened.

The Rothko Chapel is an interfaith sanctuary, a center for human rights — and a one-man art museum devoted to 14 monumental paintings by abstract expressionist Mark Rothko. The Houston landmark, commissioned by John and Dominique de Menil, opened its doors 40 years ago, in February 1971.

For the past four decades, the chapel has encouraged cooperation between people of all faiths — or of no faith at all. While the chapel itself has become an art landmark and a center for human-rights action, the sanctuary's creator never lived to see it finished. Rothko committed suicide in 1970. 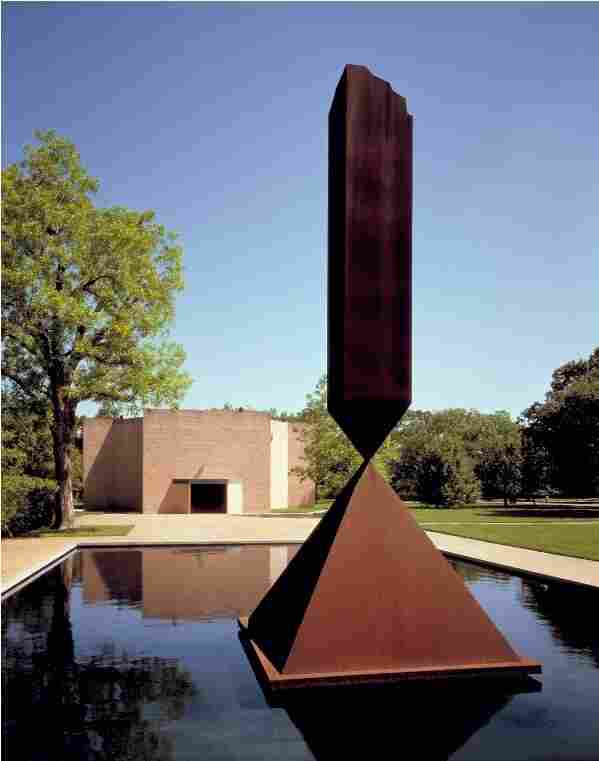 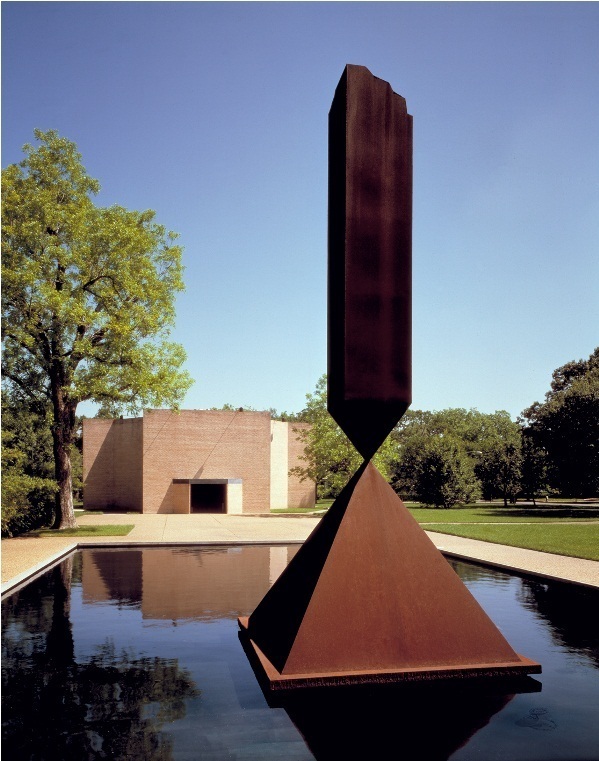 The Broken Obelisk by Barnett Newman stands outside the Rothko Chapel.

Approaching the chapel from the south, visitors first see a steel sculpture called Broken Obelisk by Barnett Newman in the middle of a pool — it appears to be floating on the surface of the water. The chapel itself is a windowless, octagonal brick building. Solid black doors open on a tiny glass-walled foyer. (The foyer was walled off from the rest of the interior when the Gulf Coast's notorious humidity began to affect the paintings.)

The main room is a hushed octagonal space with gray stucco walls, each filled by massive paintings. Some walls feature one canvas, while on others, three canvases hang side by side to form a triptych. A baffled skylight subdues the bright Houston sun, and the surfaces of the paintings change dramatically as unseen clouds pass outside. There are eight austere wooden benches informally arranged, and today, a few meditation mats. A young woman brings the meditation hour to a close by striking a small bowl with a mallet, creating a soft peal of three bells in the intense silence of the room.

Concerts, conferences, lectures, weddings and memorial services all take place in the chapel throughout the year, but on most days you will find visitors — about 55,000 annually come to see, to meditate, to write in the large comment book in the foyer, to read the variety of well-thumbed religious texts available on benches at the entrance.

There is always an attendant to greet people, answer questions, and, if necessary, ask visitors to put their cell phones away. Suna Umari has worked at the chapel in various jobs for 30 years, most recently as historian. She also takes a turn as attendant, and her eight-hour shifts have given her a new sense of what the chapel means to visitors.

"People feel it's their place," she says. Her relaxed, almost musical voice fits well with the atmosphere of the place. "They come, and they have a problem, and they cry in this space. If you look at the comment books, they make comments to each other as though this was their personal little diary."

More On The Rothko Chapel

Emilee Dawn Whitehurst, The Chapel's Executive Director, On Connecting With The Transcendent

Whitehurst Examines The History Of The Word "Chapel"

Umari says there's one couple who visits the chapel every six months:

"The first time I saw them, they must have had a fight, because she came in and sat down; then he followed," Umari says. "He sat next to her, and she ignored him. She kept turning her head away from him. They whispered to each other, and pretty soon they made up."

When the couple came out to the foyer, the man wrote a declaration of his love in the comment book — he used a whole page. The woman wrote that she loved him back.

For one visitor with a very personal connection to the chapel, the experience was unnerving.

"I wasn't prepared for that when I walked in the door," says Christopher Rothko, the painter's son. He was a child when the Rothko Chapel opened. He didn't come to see it until he was 33 years old, and he was surprised that at first, the paintings didn't really communicate with him. After all, he points out, he's used to conversing with Rothkos on a daily basis. But not that day.

"I almost left with nothing," Rothko says, but he lingered for a little while, "and ended up spending an hour and 15 minutes there. The time just sort of stopped running. I can't even tell you where I went at that point. I just know it was a Rothko experience unlike one I've had before."

'Looking At The Beyond'

These paintings do not feature the luminous color fields that made Rothko famous. The paintings in the chapel are dark, in purplish or black hues. And there's a reason for that, says Umari. 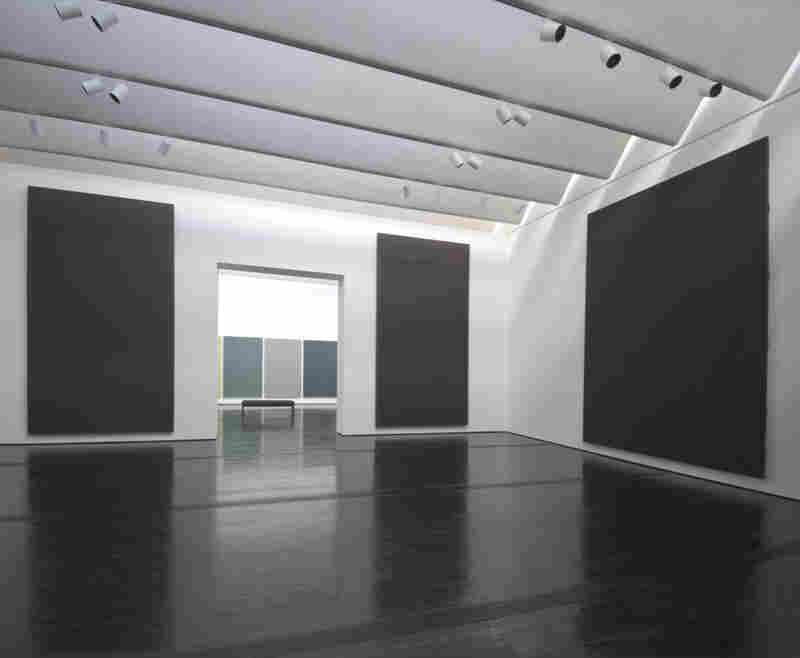 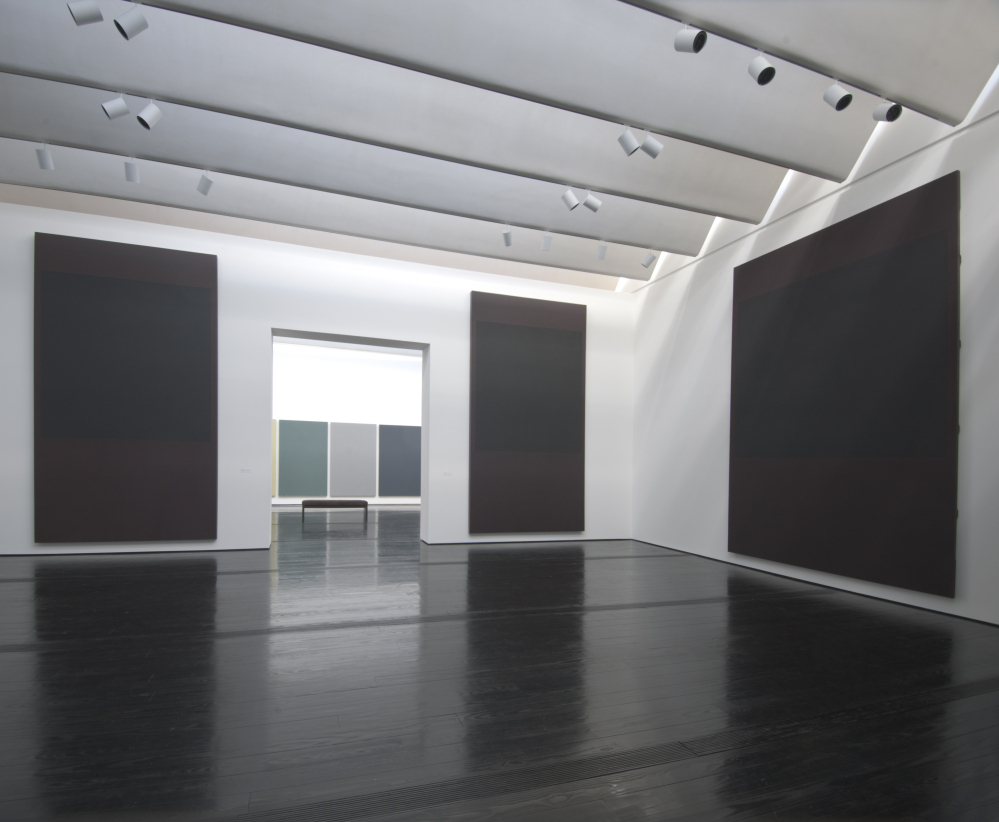 The Menil Collection, just down the street from the chapel, is displaying six rarely exhibited Rothko works in honor of the chapel's 40th anniversary. Four of the canvases are similar to the chapel's art and are referred to as "alternate" panels.

At first glance, the paintings appear to be made up of solid, dark colors. But look closely, and it becomes evident that the paintings are composed of many uneven washes of pigment that create variations in every inch. Stepping back, waves of subtle color difference appear across the broad surfaces — leading to an unmistakable impression of physical depth.

The canvases are huge; the largest is about 15 feet by 11 feet. Susan Barnes, author of The Rothko Chapel: An Act of Faith, was at the chapel the day they were installed.

"What I remember most of all was these large paintings, one at a time, being put in a sling and lowered through the skylight," Barnes says. "The largest of these ... the four single monochrome paintings ... barely cleared."

In fact, the first day, the truck and the crane had to be sent back because it was too windy. Think about a massive, wall-sized painting, Barnes says, "and think about as it as a sail. It was too dangerous."

Back in 1970 when the paintings arrived, Barnes was fresh out of college and working for the de Menils. They hired architect Philip Johnson to design the building and Rothko to fill it. But the painter had such specific ideas about the space that Johnson bowed out.

It was always intended to be more than an art gallery, though. In a 1972 interview, Dominique de Menil said she saw it as a meeting place — a gathering place "of people who are not just going to debate and discuss theological problems, but who are going to meet because they want to find contact with other people. They are searching for this brotherhood of humanity."

It's a place that will really not just invite, but also demand a kind of journey.

Religious leaders from around the world participated in the chapel's dedication in late February 1971. Forty years later, the chapel continues to be a space devoted to personal contemplation, interfaith dialogue and the fight for human rights. Though Mark Rothko didn't live to see the sanctuary he created, Christopher Rothko says his father knew what it should be.

"It took me a while to realize it, but that's really my father's gift, in a sense, to somebody who comes to the chapel. It's a place that will really not just invite, but also demand a kind of journey."

The journey for onetime art-history student Barnes led to a ministry in the Episcopal Church. She says that over the years, the chapel has become a sacred place.

"You walk into this chapel and you know, now, that it has been sanctified by the prayers of the people. There is something you feel in the chapel that tells you it is a holy space."