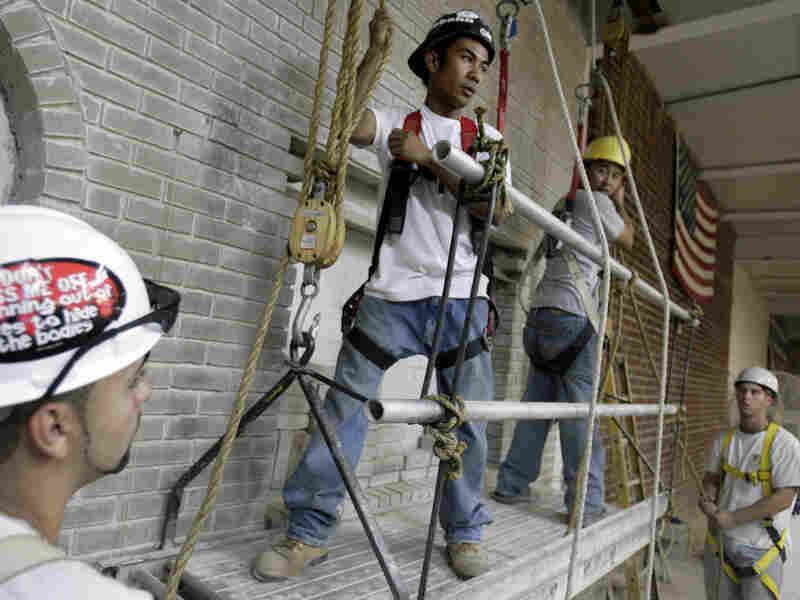 Participants work on their techniques and safety procedures during a suspended-scaffolding training class in New York. Construction incurred the most fatal injuries of any industry in the private sector in 2009, according to the Labor Department. Seth Wenig/AP hide caption 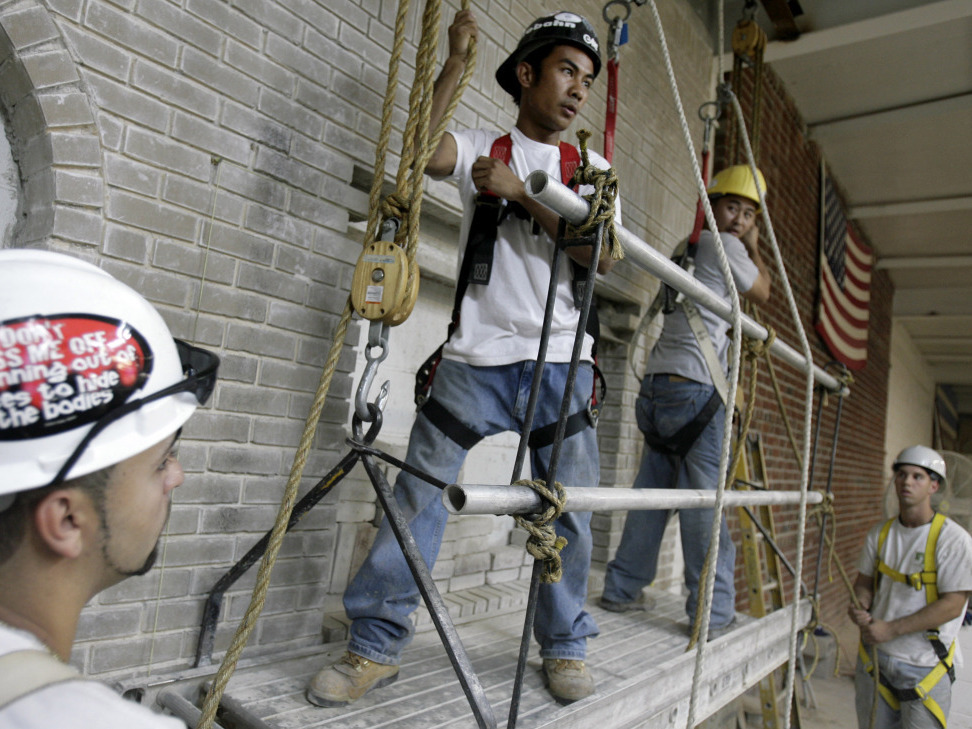 Participants work on their techniques and safety procedures during a suspended-scaffolding training class in New York. Construction incurred the most fatal injuries of any industry in the private sector in 2009, according to the Labor Department.

Congressional Republicans are promising to scrub the government for what they say are "job killing" regulations. One of their primary targets is the Occupational Safety and Health Administration, or OSHA.

Republicans say OSHA enacts expensive rules without regard to their effect on business. They've proposed cutting its budget this year by 20 percent, a reduction the director says would be devastating to the agency's efforts to protect worker safety.

OSHA has long been on the front edge of the divide between labor and management, and Democrats and Republicans. Where during the Bush administration the agency stressed voluntary compliance with worker safety standards on the part of business, the Obama administration stepped up enforcement. It hired more inspectors and increased OSHA's budget.

Now, Republicans in control of the House are trying to push the pendulum back. As part of their drive to cut about $61 billion from federal spending in the current fiscal year, they've targeted OSHA for a $99 million reduction.

"The Republicans have proposed a 20 percent cut and given [that] half a year's over, that really means a 40 percent cut," OSHA administrator David Michaels says. "It would really have a devastating effect on all of our activities."

Peg Seminario, the safety and health director of the AFL-CIO, agrees. She says the Republicans' proposed cuts would diminish the agency's staffing and abilities:

"We now have a much bigger workforce than we had 40 years ago when OSHA was started," Seminario says. "But they would propose to slash the agency, slash enforcement, slash standards-setting, leaving the agency essentially crippled and unable to do its job to protect workers."

Republicans argue that OSHA's stepped-up enforcement threatens jobs. At a recent hearing on the issue, the chairman of the House Subcommittee on Workforce Protections, Michigan Republican Tim Walberg, questioned the agency's priorities.

"Over the last two years, OSHA has not only attempted to implement several policy changes that would have profound impact on the workplace; it has become an administration more focused on punishment than prevention," Walberg said. "Our goal should be to prevent workplace accidents before they happen, not simply shame an employer once a tragedy has occurred on the job site."

One of the biggest areas of contention has been ergonomics standards. In 2000 in the final weeks of the Clinton administration, OSHA issued an ergonomics rule to set standards for workplaces for repetitive motion injuries such as carpal tunnel syndrome. The next year, the GOP-controlled Congress repealed the standard. Now the two sides are scrapping over ergonomics again. This time, OSHA wants employers to record instances of repetitive motion injuries, in a log most businesses already keep.

Joe Trauger, a vice president at the National Association of Manufacturers, calls the recording proposal problematic. "It's very difficult for an employer to discern whether or not an injury actually occurred in the workplace or if it occurred outside the workplace," he says. "Because the definitions were expanded to such a degree, that if a person felt like they had a muscle soreness, that would be a reportable incident. Well, it may not have anything to do with what actually happens in the workplace."

Michaels, the OSHA administrator, says the repetitive motion proposal has been misunderstood and that the agency has decided to further explain the requirement before implementing it. He says OSHA always looks at the cost of complying with its rules and invites comments on its proposals before implementing them. He says OSHA can protect jobs and workers at the same time.

"We believe we can do both," Michaels says. "We know that OSHA doesn't kill jobs. It stops jobs from killing workers. When employers embrace safety, they actually save money. We know that's true. They often don't believe it, but we show them. And we have consultants who provide that information for free."

While fighting off cuts to this year's budget, the Obama administration has proposed increasing spending on OSHA in the next fiscal year by a bit more than 4 percent.