Accessibility links
Can Libya's Rebel Forces Really Take On Gadhafi? Opposition commanders say they have enough troops and arms to mount an offensive against Tripoli and other cities that remain in Moammar Gadhafi's control. But their army does not appear to be a cohesive, professional force. In the dusty outpost of Ajdabiya, men almost seem to be playing at being soldiers. 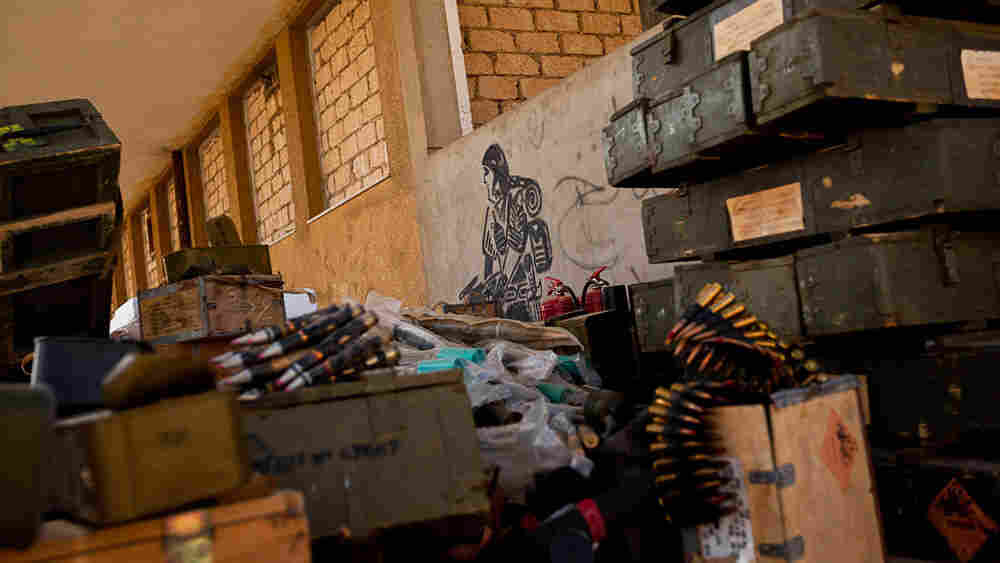 Ammunition and weapons are scattered around an arms depot in Ajdabiya, Libya, on Tuesday. Trevor Snapp for NPR hide caption

In eastern Libya, rebel commanders say they have enough troops and arms to not only defend themselves but also mount an offensive against Tripoli and other cities still controlled by forces loyal to Moammar Gadhafi.

One military commander tells NPR that orders have been given to attack the capital. But what's not clear is how effective a fighting force the rebel army will be.

A large military base with an enormous stockpile of weapons sits on the edge of Ajdabiya, a dusty outpost on the coastal road that stretches west from the opposition stronghold of Benghazi.

The storerooms on the base look like something out of Raiders of the Lost Ark. Munitions are stacked to the ceiling in warehouse after warehouse. The stockpile has been partially looted — the munitions are scattered in many places. And it's guarded by only about 30 men. 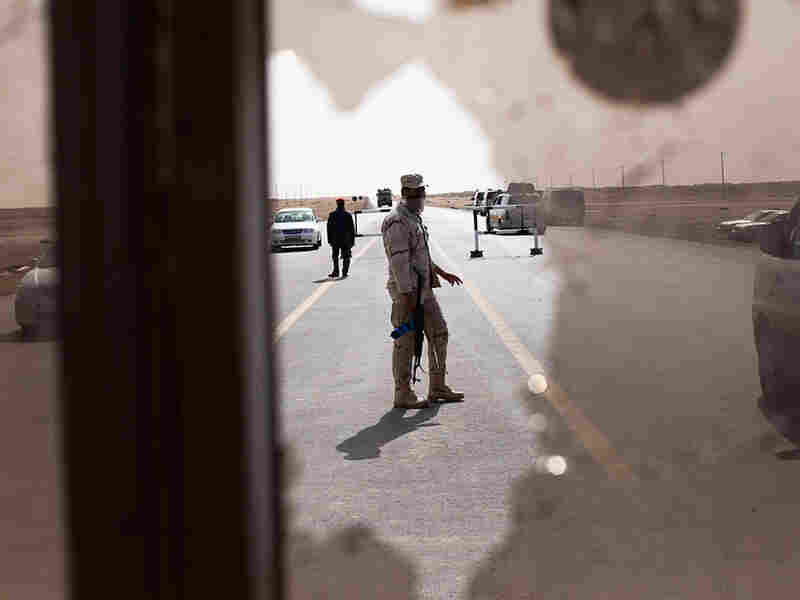 A volunteer soldier waves cars through a checkpoint in Ajdabiya on Tuesday. Trevor Snapp for NPR hide caption 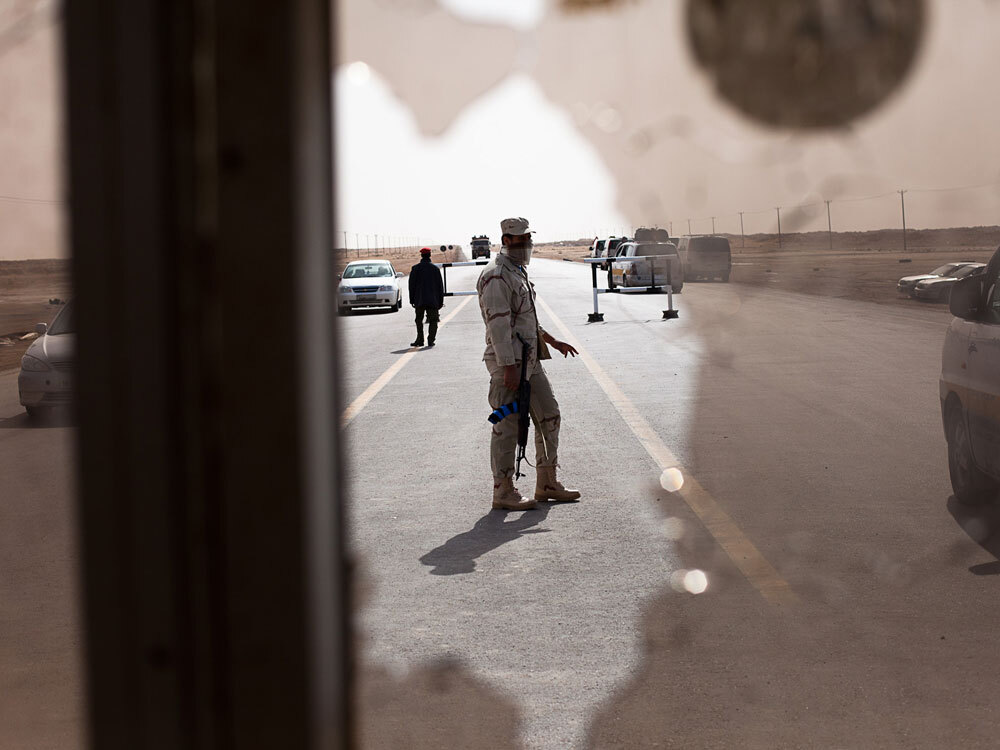 A volunteer soldier waves cars through a checkpoint in Ajdabiya on Tuesday.

Nigel Collins was at the munitions dump providing security for a Canadian news crew. A former British army soldier, he says the weapons are not state of the art, but there are a lot of them — and they can be effective.

"This will work if you put it in the hands of people that know what they're doing," he says.

But will the new force that is being built here be up to the task?

Commanders are training young recruits in schools and mosques for up to four hours each day. Most men in Libya have some military experience because they are required to serve for at least six months.

But the rebel army does not appear to be a cohesive, professional force.

Ashraf Mushaty is a one of the new recruits stationed at the base in Ajdabiya. He's short and slight, wearing an uncomfortably large military uniform.

He says fighter jets sent by Gadhafi tried to bomb the depot Monday. He boasts that they were chased away by anti-aircraft guns fired by rebel forces. There is no sign that the jets dropped any bombs on the base.

Still, the area is a mess. Guns and ammunition are strewn about, left there from when the base was pillaged after the uprising in this city. So far, no one has tried to organize the cache.

The men almost seem to be playing at being soldiers. To impress a TV crew, one of the militiamen suddenly grabs a rocket-propelled-grenade launcher and fires it into the desert. 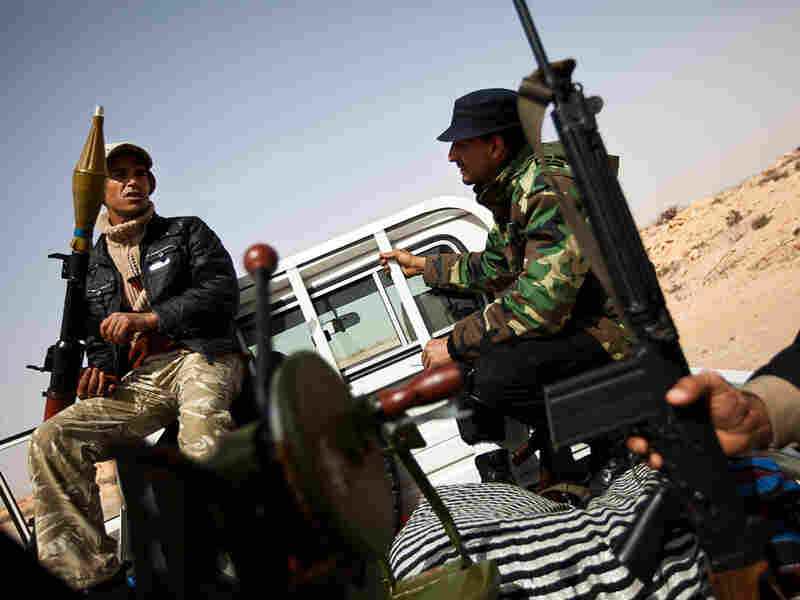 Volunteer members of the army guard the ammunition depot in Ajdabiya on Tuesday. Trevor Snapp for NPR hide caption 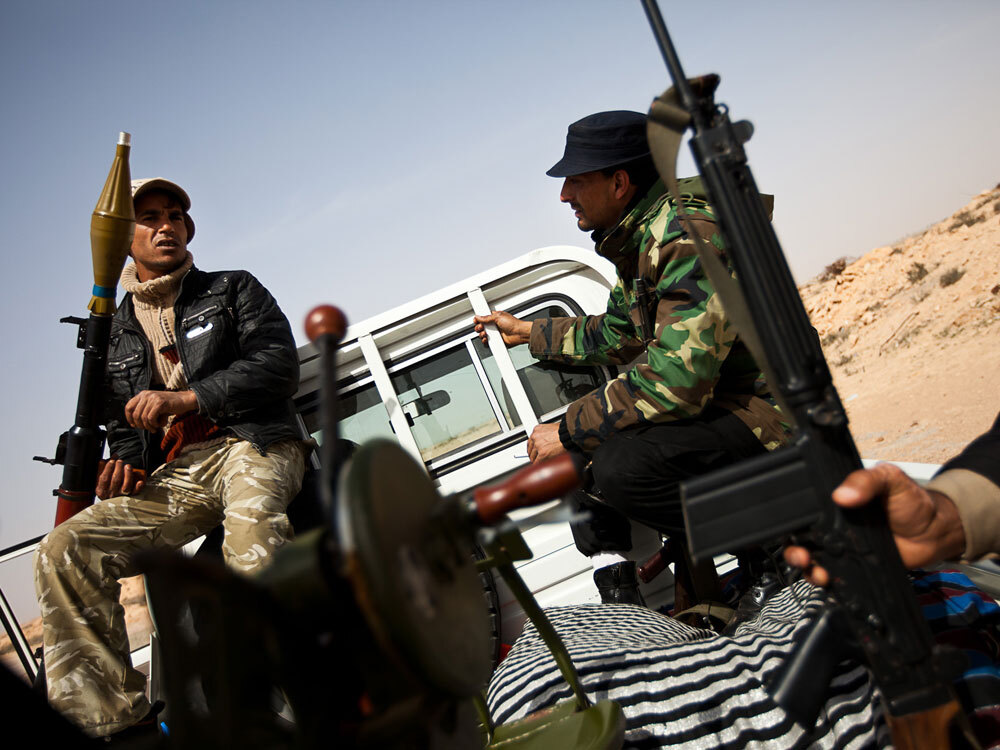 Volunteer members of the army guard the ammunition depot in Ajdabiya on Tuesday.

The RPG round doesn't detonate on impact.

Bumps In The Road

Hani el Abieday, 39, is an engineer who has volunteered to fight for the rebel army. He used to live in Germany, so he knows what a professional military looks like.

He says the rebels don't have a real fighting force and their equipment is old. But what they do have, he adds, is the courage of the young people — who are willing to die for their country.

Part of the problem is that, unlike other countries in the Middle East, Gadhafi kept his army underpaid and underfunded.

One defector from the Libyan army said he only made about $300 a month when he was serving.

As evening fell, a convoy of rebel soldiers careened down the street, shouting that they had been given the order to march on the capital.

When a journalist tried to catch up, they were stuck around the corner fixing a flat tire, their triumphant exodus prematurely stalled.