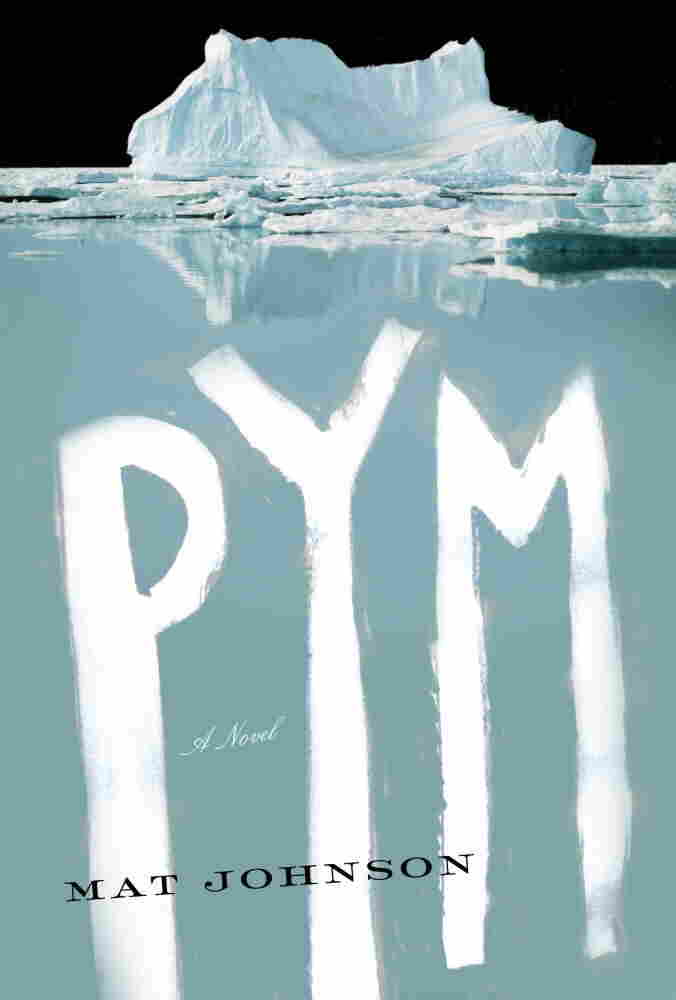 If all you think of when you think of Edgar Allan Poe are poems like "The Raven," or tales of terror like "The Fall of the House of Usher," you might not realize that Poe was a funny guy. I'm not talking belly laughs, but more a creepy comic vision that savored the absurd in desperate situations — like an annoying corpse whose darn heart just won't stop thumping; or — spoiler alert! — a whodunit where the killer turns out to be an orangutan. It's this strain of ghastly humor in Poe that Mat Johnson mines in his new novel, Pym, an inventive and socially sassy play on Poe's one and only novel: The Narrative of Arthur Gordon Pym of Nantucket.

Poe published the novel in 1838, trying, as always, to make some money from his writing by cashing in on the public's thirst for novels and newfound curiosity about Antarctica. Masquerading as authentic journal entries, the tale chronicles the voyages of a young seafarer, Pym, who suffers through mutiny, shipwreck and cannibalism. But, buried alive deep in Poe's icy adventure tale is the ultimate scary subject in 19th-century American literature: slavery.

The Narrative of Arthur Gordon Pym keeps hallucinating about race: a black crew member heads the mutiny; Pym and some survivors of the shipwreck drift to an island near the glacial whiteness of the South Pole where, lo and behold, all of the inhabitants are black. Even their teeth are black, and these folks are terrified of whiteness. At the abrupt end of Poe's novel, a giant white-shrouded figure rises up out of a frozen chasm and ... well, that's all he wrote.

Not surprisingly, the fragmented jumble of The Narrative of Arthur Gordon Pym was not a best-seller, and Poe himself later dismissed it as "a very silly book." Silly, certainly, and also haunted by the specter of race. Mat Johnson, riffing on the material, seems to have a blast chasing all the pale ghosts out of Poe's ice caverns and updating this master text of anxious white fright.

In Johnson's Pym, our hero, Chris Jaynes, is a professor of African-American literature, or, as he calls himself, a "Professional Negro." When the novel opens, Jaynes has just been denied tenure for refusing to serve on his college's diversity committee and for "going off the farm," as he puts it, to teach a course on his passion, the work of Edgar Allan Poe. The course, in a twist on a Toni Morrison title, is called "Dancing With the Darkies: Whiteness in the Literary Mind," and Jaynes explains its focus this way:

My work, it's about finding the answer to why we have failed to truly become a postracial society. It's about finding the cure! A thousand Baldwin and Ellison essays can't do this, you have to go to the source, that's why I started focusing on Poe. If we can identify how the pathology of Whiteness was constructed, then we can learn how to dismantle it. 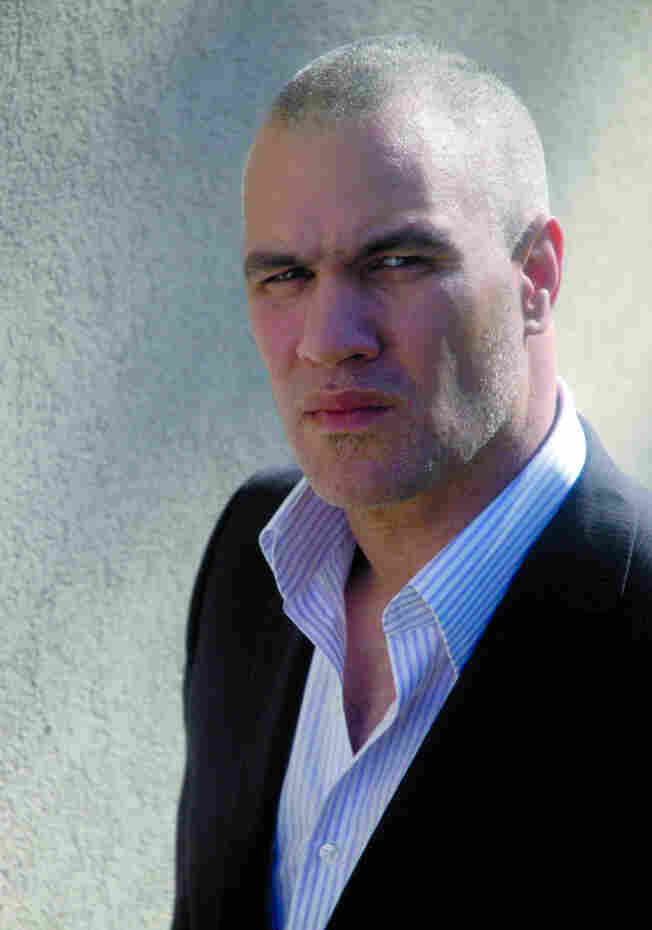 Mat Johnson is the author of several novels and graphic novels including Drop, Hunting in Harlem and Incognegro. Johnson is a faculty member at the University of Houston Creative Writing Program and lives in Texas with his wife and children. Meera Bowman Johnson. hide caption 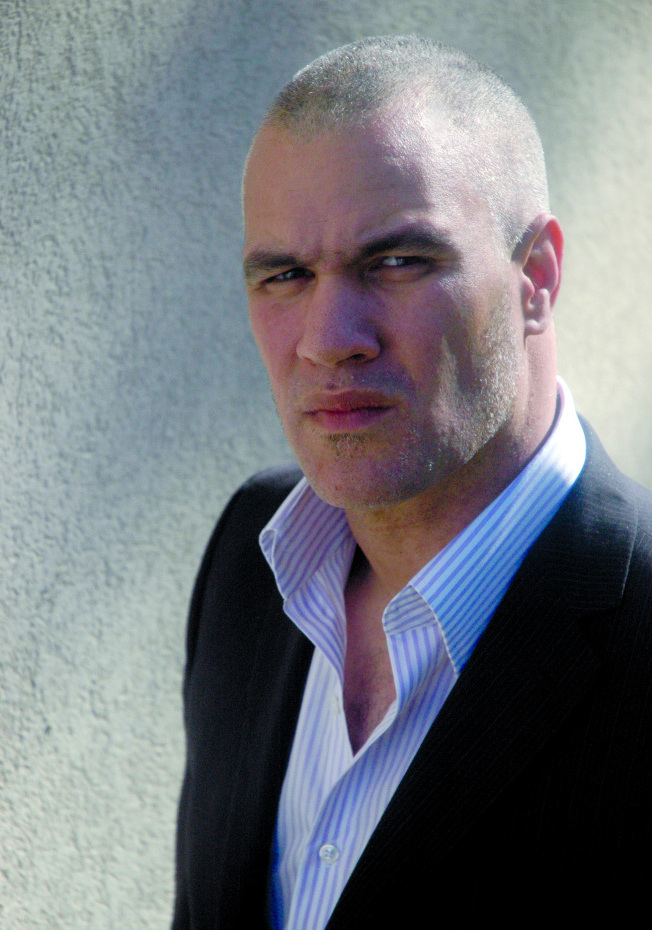 Mat Johnson is the author of several novels and graphic novels including Drop, Hunting in Harlem and Incognegro. Johnson is a faculty member at the University of Houston Creative Writing Program and lives in Texas with his wife and children.

The college doesn't buy Jaynes' rap about the key to America's race problem lying in classic white texts. Instead, he is promptly replaced with a hip-hop theorist. But Jaynes is undaunted. He decides to re-create the voyage of Poe's hero, Arthur Gordon Pym. Like Pym, Jaynes literally seeks to travel to the source of pure Whiteness — the South Pole — but this time in the company of an all-black crew. Jaynes has found a manuscript that suggests that the lost black civilization near the Pole that Poe described in his novel might be real, and he wants to make contact. Instead, he and his crew discover a prehistoric world of giant white people, or "Snow Honkies," who enslave them.

I'll stop there, but Johnson's inventiveness never does. This is a comic nightmare in which Little Debbie Snack Cakes and the luminous paintings of a Thomas Kinkade-like schlock artist play pivotal roles. Jaynes even comes up with intra-racial jokes about global warming: one black guy trekking through the tundra with Jayne surveys a crack in the South Pole ice, and immediately denies responsibility by saying: "Ain't our fault. It was all them Escalades in the ghetto."

Loony, disrespectful and sharp, Johnson's Pym is a welcome riff on the surrealistic shudder-fest that is Poe's original. As Johnson implicitly points out, these traditional "heart of darkness" narratives take on a whole different hue when the explorer's telescope is seized by other hands.

Always thought if I didn't get tenure I would shoot myself or strap a bomb to my chest and walk into the faculty cafeteria, but when it happened I just got bourbon drunk and cried a lot and rolled into a ball on my office floor. A couple days of this and I couldn't take it so I ended classes a week early and checked into the Akwaaba Bed and Breakfast in Harlem to be among my own race and party away the pain. But mostly I just found myself back in that same ball some more, still on the floor, just at a more historically resonant address. My buddy Garth Frierson, he'd been laid off about six months before, and was nice enough to drive all the way from Detroit to help a childhood friend. This help mostly consisted of him sitting his bus driver ass on my rented bed, busting on me until I had enough shame to get off my own duff and try to make something of myself again.

By then the term was over, graduation done, campus vacant. I didn't want to see anybody. The only things worse than the ones who were happy about my dismissal were the ones that weren't. The sympathy, the condolences. It was all so white. I was the only black male professor on campus. Professor of African American Literature. Professional Negro. Over the years since my original hire I pushed away from that and insisted on teaching American literature in general, following a path toward my passion, toward Edgar Allan Poe. Specifically, I offered the course "Dancing with the Darkies: Whiteness in the Literary Mind" twice a year, regardless of enrollment. In regard to the number of students who chose to attend the seminar, I must say in my defense that the greatest ideas are often presented to empty chairs. However, a different theory on proper class size was cited in my denial letter from the president, and given as a reason to overturn the faculty's approval.

Curing America's racial pathology couldn't be done with good intentions or presidential elections. Like all diseases, it had to be analyzed at a microscopic level. What I discovered during my studies in Poe's and other early Americans' texts was the intellectual source of racial Whiteness. Here, in these pages, was the very fossil record of how this odd and illogical sickness formed. Here was the twisted mythic underpinnings of modern racial thought that could never before be dismantled because we were standing on them. You don't cure an illness by ignoring it or just fighting the symptoms. A Kleenex has never eradicated a cold. I was doing essential work, work affecting domestic policy, foreign policy, the entire social fabric of the most powerful nation of the world. Work that related directly to the way we lived our daily lives and perceived reality itself. Who cared if a bunch of overprivileged nineteen-year-olds with questionable hygiene could be bothered to rise for the 8 a.m. class? Who cared if I chose to not waste even more precious research time attending the toothless Diversity Committee?

"Just get your books, dog. And get out of there. Pack up your place, focus on what you can do. You want, you can come back with me to Detroit. It's cheap, I got a big crib. Ain't no jobs, but still." Garth and I drove up the Taconic in the rain. I was still drunk, and the wet road was like lines on a snake's back and my stomach was going to spill. Even drunk, I knew any escape plan that involved going to Detroit, Michigan, was a harbinger of doom. Garth Frierson was my boy, from when we were boys, from when I lived in a basement apartment in Philly and he lived over the laundromat next door. Garth didn't even ask how many books I had, but he must have suspected.

Because I had books. I had books like a lit professor has books. And then I had more books, finer books. First editions. Rare prints. Copies signed by hands long dead. Angela walked out on me a long time ago and my chance of children walked with her, but I had multiplied in my own way. I'd had shelves built in my office for these books, shelves ten feet tall and completely lining the drywall.

The campus was dead. A vacant compound hidden from the road by darkness and hulking pines. The gravel parking lot was empty, but I made Garth park in the spot that said president–?violators will be towed on principle. When you get denied tenure at a college like this–intimate, good but not great–your career is over. A decade of job preparation, and no one else will hire you. If you haven't published enough, people assume tenure denial means you never will. If you have published and were still denied, people assume you're an asshole. Nobody wants to give a job for life to an asshole. And they didn't have to in this economy. Outside of a miracle, after denial I would be lucky to scrounge up adjunct teaching at a community college somewhere cold, barren, and far from the ocean. A life of little health insurance, bill collector calls, and classrooms with metal detectors, all compliments of this college president, Mr. Bowtie. The least I could do was shit in his space for an hour.

We trudged. The building looked like an old church that had lost its faith, every step up the stairs a sacrilege. Garth huffed, but followed. I'd chosen an office in the back of the top floor to dissuade students, but my lectures had done a better job of this. My office was a narrow A-framed cathedral with a matching window. A shrine to the books that lined the walls and my own solitude.

It was empty. I should have been greeted with the hundreds of colored spines of literary loves, but there was nothing. My books were gone. My office had been cleared out. Everything was gone: my pictures, my lamp, my Persian rug, everything not school property or nailed down, gone. A chasm of vacant whitewashed bookshelves opened up before me.

Excerpted from Pym by Mat Johnson Copyright 2011 by Mat Johnson. Excerpted by permission of Spiegel & Grau, a division of Random House Inc. All rights reserved. 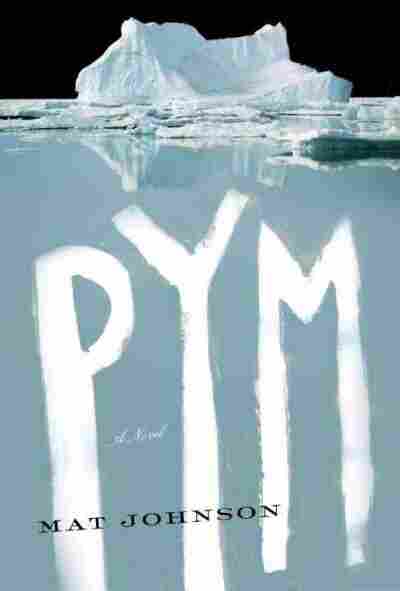