Accessibility links
Supreme Court Considers Whether Ashcroft Can Be Held Liable In 'Material Witness' Case Former University of Idaho running back Abdullah al-Kidd, a U.S. citizen, says his constitutional rights were violated in 2003 when he was detained as he was about to board a flight to Saudi Arabia. Now the Supreme Court will determine whether former Attorney General John Ashcroft is immune from the lawsuit. 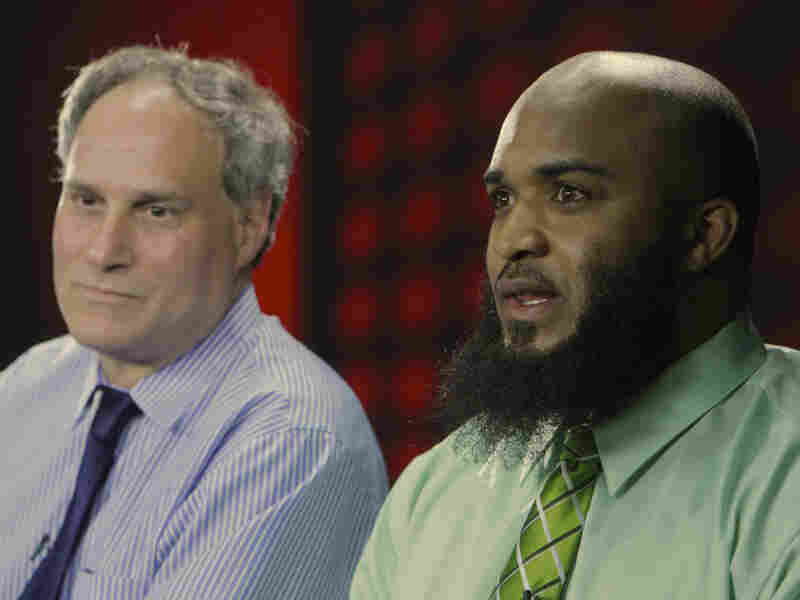 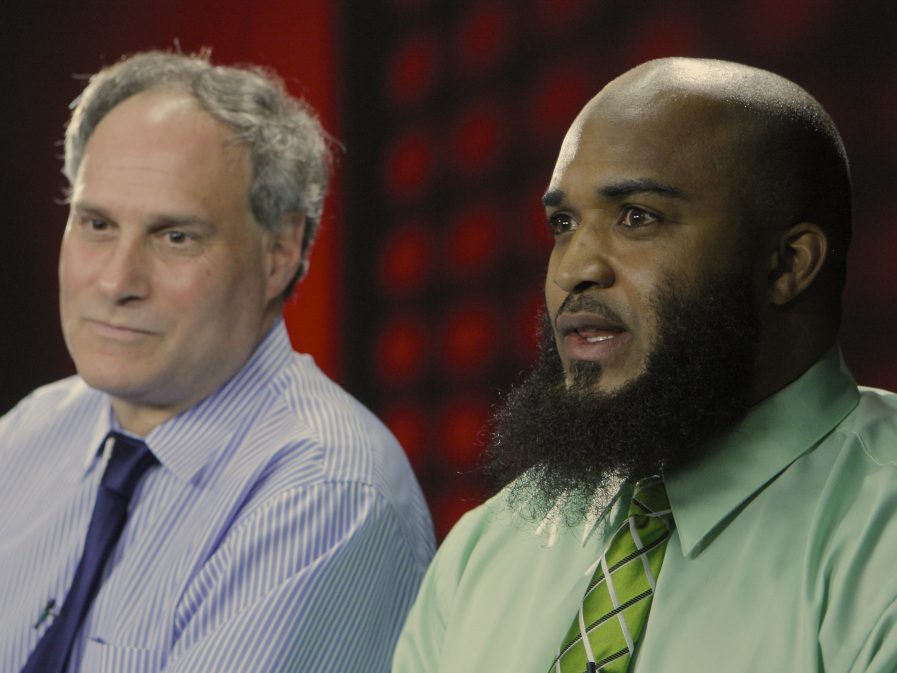 On Feb. 14, plaintiff Abdullah al-Kidd (right) and his attorney, Lee Gelernt, discuss a Supreme Court lawsuit against former Attorney General John Ashcroft during an interview with The Associated Press in Los Angeles.

The Supreme Court takes up a major case Wednesday stemming from the war on terrorism. At issue is whether former Attorney General John Ashcroft is entitled to immunity from a lawsuit claiming he misused the law to arrest a U.S. citizen under false pretenses.

A federal appeals court panel composed of all Republican appointees ruled 2-1 that the case should proceed to trial because the allegations, if true, are "repugnant to the Constitution." The Obama administration appealed to the Supreme Court.

At the center of the case is a former star running back at the University of Idaho. Lavoni Kidd, the son of a prison guard and an IBM worker, left the Christian faith of his family and converted to Islam while he was in college, changing his name to Abdullah al-Kidd.

None of this was particularly remarkable until after Sept. 11, 2001, when the FBI began visiting al-Kidd and asking him questions. At that time, al-Kidd says, he "fully cooperated" with the FBI, repeatedly meeting with agents and answering their questions.

'The First Of Many Humiliations'

Eventually, the FBI's interest seemed to subside, and in 2003, al-Kidd won a scholarship to study language and religion in Saudi Arabia. He was about to board a flight to the Persian Gulf when FBI agents arrested him. He was shackled and taken to jail under a material witness warrant.

It was "one of the most humiliating, degrading moments of my life," he says. "I could only imagine what people were thinking about me."

The arrest was the first of many humiliations, according to al-Kidd. Over the next 15 days, he was held in three high-security prisons, housed with murderers, repeatedly strip-searched and forced to sit naked while other prisoners around him were clothed. He was held in cells with 24-hour lighting and interrogated, he says, primarily about himself.

Al-Kidd was eventually released on the condition that he live with his in-laws, travel only within a four-state region and report regularly to federal authorities. The conditions were lifted more than a year later, but by that time, al-Kidd says he had lost his job and his marriage had fallen apart.

The material witness law under which al-Kidd was seized and held is designed to ensure that a witness who might flee remains available. A federal magistrate judge issued a warrant authorizing his detention after FBI agents swore in an affidavit that al-Kidd had bought a one-way, first-class ticket for $5,000 to Saudi Arabia.

According to ACLU lawyer Lee Gelernt, who represents al-Kidd, the affidavit was false in some respects and misleading in others — namely, his ticket was round-trip, coach class and cost $1,700.

Nor was the magistrate informed that al-Kidd had "repeatedly cooperated with the FBI" and that he "was never told that he might be needed as a witness, never told not to travel, never told to alert the FBI if he intended to travel," he says.

Indeed, Gelernt says, al-Kidd would have postponed his trip if the FBI had just made the request.

Gelernt contends that the Bush administration used the material witness statute for something Congress specifically refused to authorize: Preventive detention, or arrest without evidence of a crime.

I grew up here in America. I believed in the system, and I believe this system is the way I can clear my name, get vindication for this case, and hopefully, through this case, that other people will not have to experience what I experienced.

Prosecutors said they needed al-Kidd's testimony in the case of Sami al-Hussayen, one of al-Kidd's Muslim friends in Idaho. However, al-Kidd was never called to testify, and al-Hussayen was not convicted on a single count.

Gelernt claims that the material witness warrant in al-Kidd's case, and in some 70 others that civil liberties lawyers have identified, was nothing more than pretext.

"They did not actually want Mr. al-Kidd's testimony," Gelernt says. "It was being used solely for the purpose of investigating and preventively detaining Mr. al-Kidd himself."

Al-Kidd sued Ashcroft and other justice department officials, contending that they violated his constitutional rights. He also sued the three prison wardens for his treatment in prison and the individual FBI agents who gave false information in seeking the warrant. The lawsuits against the prison wardens settled out of the court, and the lawsuits against the FBI agents are still pending.

Only the lawsuit against Ashcroft is before the Supreme Court, and the sole question is whether it can proceed to even the pretrial stage. The Obama administration maintains that Ashcroft should be completely immune from the suit because the material witness statute was used appropriately.

"If they, in fact, have a basis for saying they wanted [al-Kidd's] testimony, and he's, in fact, about to become unavailable, then they can take him into custody," Mukasey says, "even if it's a pretext."

Richard Samp of the conservative Washington Legal Foundation asserts that the government did have a genuine interest in obtaining information from al-Kidd. And because he was about to leave the country, Samp argues, "it would have been inappropriate, particularly given the anti-terrorism investigations going on at the time, not to step in and try to do something." 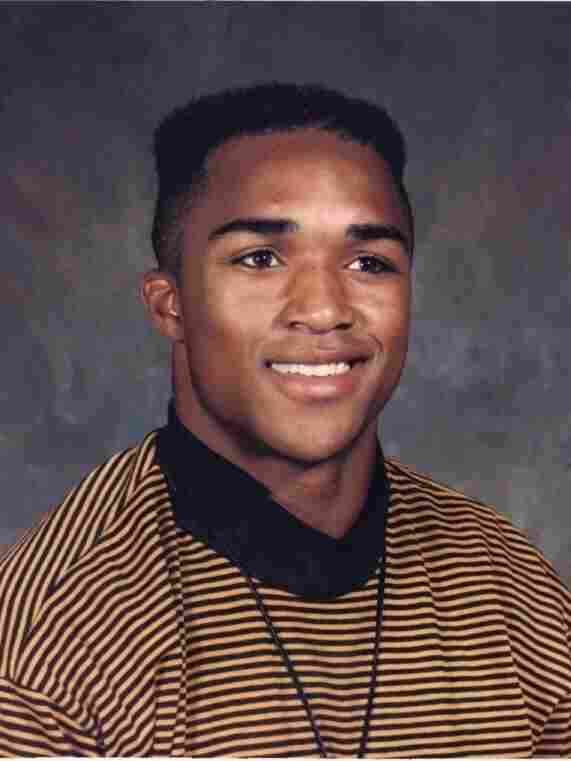 College athlete Lavoni Kidd left the Christian faith of his family and converted to Islam while he was in college, changing his name to Abdullah al-Kidd. Al-Kidd was arrested in 2003 as he was about to board a flight to Saudi Arabia. Prosecutors say they needed his testimony in the case of Sami al-Hussayen, one of al-Kidd's Muslim friends in Idaho. Courtesy of the ACLU hide caption

toggle caption
Courtesy of the ACLU 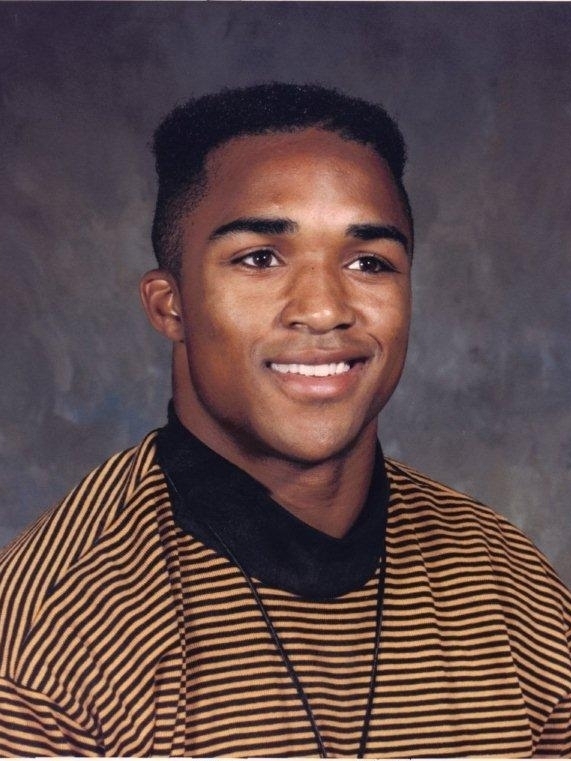 College athlete Lavoni Kidd left the Christian faith of his family and converted to Islam while he was in college, changing his name to Abdullah al-Kidd. Al-Kidd was arrested in 2003 as he was about to board a flight to Saudi Arabia. Prosecutors say they needed his testimony in the case of Sami al-Hussayen, one of al-Kidd's Muslim friends in Idaho.

Courtesy of the ACLU

Samp, who submitted a brief in this case on behalf of Mukasey and four other former attorneys general, contends that there is nothing wrong with the government investigating someone at the same time it is seeking his testimony. Like the Justice Department, Samp argues that it is a threat to national security to have the attorney general and other high officials looking over their shoulders when they make decisions like this.

"We would like to see the court broadly read the qualified immunity doctrine so that future Cabinet members are not going to face similar suits," Samp says.

Civil liberties groups have indeed tried to sue Ashcroft before, only to be foiled in the Supreme Court. In 2009, the justices, by a 5-4 vote, blocked a lawsuit from proceeding against Ashcroft, because the court majority said a Pakistani detainee in the U.S. could not tie high Justice Department officials closely enough to the man's six months of solitary confinement.

However, in this case al-Kidd relies on statements made by Ashcroft and others that seem to suggest the Justice Department was using the material witness statute for much more than obtaining testimony.

Shortly after al-Kidd was seized at the airport, FBI Director Robert Mueller bragged in congressional testimony that al-Kidd's arrest was one of five major counterterrorism coups, including the arrest of Khalid Sheikh Mohammed, the alleged Sept. 11 mastermind. Al-Kidd also points to statements Ashcroft made in which the then-attorney general announced a policy of using the material witness statute in an "aggressive" manner to take "suspected terrorists off the street."

Former Attorney General Mukasey says it's important for the attorney general to be able to use the material witness law in this way "without having to worry about individual liability and saying, 'You know, maybe I better not do this. Maybe we better just let these folks slip through our fingers because one of these individuals might sue.' "

Anti-al-Qaida, Anti-Taliban And A Loyal American

Civil liberties lawyers know that the odds are against al-Kidd in the Supreme Court. No attorney general has ever been held personally liable for official actions, though some lower officials more directly involved in wrongful actions have been. And the current court has been generally hostile to such suits.

Nonetheless, in an odd way, al-Kidd believes he has won his case just by getting to the Supreme Court.

The former football star, who now wears a long beard and teaches English to university students in Saudi Arabia, believes people will now finally see him for what he is: not the terrorist portrayed in congressional testimony, in the newspapers and on TV back in 2003, but a peaceful convert to Islam who is anti-al Qaida, anti-Taliban and a loyal American.

"I grew up here in America," he says. "I believed in the system, and I believe this system is the way I can clear my name, get vindication for this case, and hopefully, through this case, that other people will not have to experience what I experienced."