Accessibility links
On The Front Lines Of A Battle For Mogadishu In Somalia, African Union troops are locked in a conflict against a ragtag Islamist force called al-Shabab. The mostly Ugandan soldiers aim to push the insurgents out of the capital and create safe space for civilians. But it's a slow and brutal war, being fought house to house. 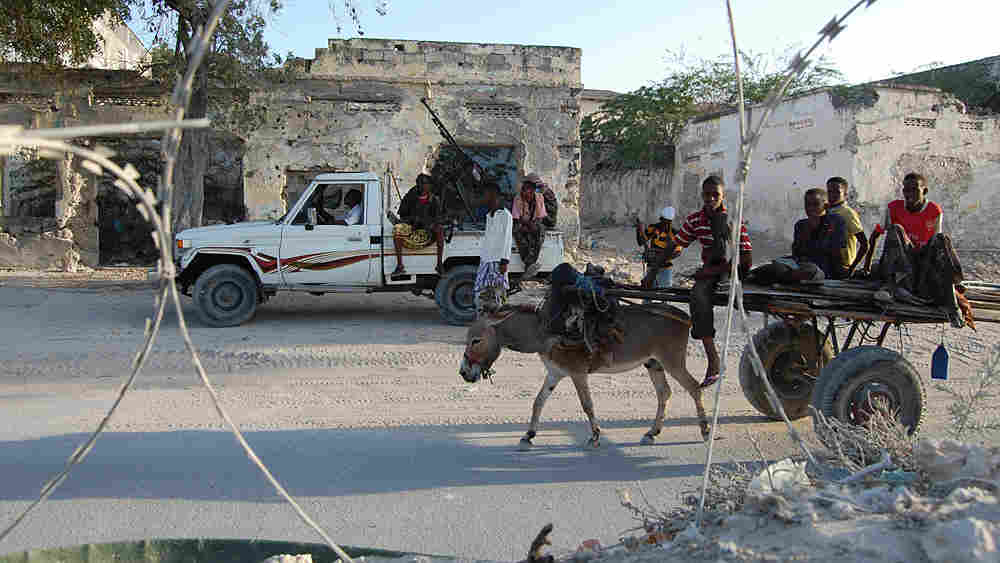 Part three of a four-part series.

African Union troops are defending a weak transitional government hunkered down in the capital, Mogadishu. The African soldiers are mostly Ugandan and largely funded by the United States.

Their goal: Push Islamist insurgents out of the city and create safe space for civilians.

In Shakara, one of Mogadishu's countless bombed-out neighborhoods, Ugandan troops have just wrapped up a house-to-house battle with a ragtag Islamist force called al-Shabab. The group claims allegiance to al-Qaida. 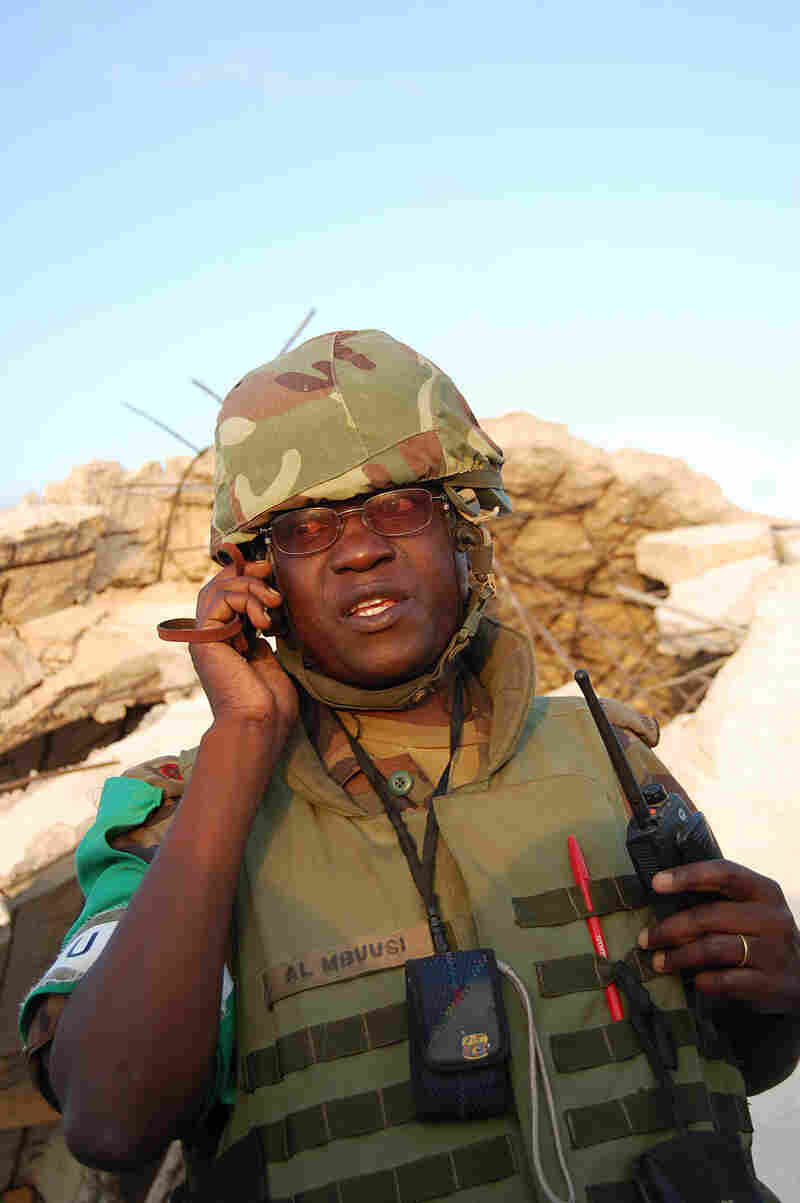 Maj. Anthony Lukwago Mbuusi of the Ugandan army listens to reports from the night's attacks on his firing positions in Mogadishu. Frank Langfitt /NPR hide caption

Al-Shabab is trying to seize control of Mogadishu and turn Somalia into a strict Islamic state.

Maj. Anthony Lukwago Mbuusi, a Ugandan field commander overseeing Shakara, says his troops face difficult conditions. He walks down into the battlefield, a valley of sand and scrub, and ducks into an abandoned house with pockmarked walls.

"This place where we are, it was in the hands of the insurgents this morning. You can see from here to that place — it's about 70 meters away," says Maj. Anthony, as he's called.

In other words, in eight hours of fighting, Maj. Anthony's men have picked up some 200 feet.

That is the battle for Mogadishu: slow and bloody.

In another house, where al-Shabab had been just hours earlier, there is no floor — only mounds of sand and trenches. To move from one room to another, you have to leap over the trenches, like crossing a stream.

An entire network of trenches snake down the valley from building to building. Maj. Anthony says al-Shabab tunneled its way into the houses.

"Yes, that's what they do. If they go through the open ground, they will lose their lives," he says.

Maj. Anthony attempts to survey the day's work, but the enemy spots him and unloads with sniper fire. A bullet rips into a building a few feet from where he's standing. There's a big boom as a mortar lands 30 feet away. The major decides it's too dangerous.

"We go! We go!" he says to his troops and several visitors, and he makes his way back up the valley.

That evening, he retreats to his command center, an abandoned villa. AK-47 rounds have chewed up a ficus tree in the courtyard outside. A rocket-propelled grenade is lodged in a wall.

Maj. Anthony says he thinks al-Shabab will try to retake some positions they lost during the day. And they do, beginning around midnight. The barrage sounds like the finale of a fireworks display, aimed right at the front door of the villa.

The major stands in the dark on the veranda in just his boxers. A radio to his ear, he listens to reports from the field. The attack is brief and, he says, unsuccessful.

But there is bad news. "Among one of the mortars they fired, it landed in a civilian populated area," he says, "and landed in one family. Someone has lost life and some others have been injured."

The mortar was from the insurgents — from al-Shabab — Maj. Anthony says.

Mugisha oversees the 8,000 African Union troops in the area. He admits his soldiers occasionally mortar civilians by accident.

Many Struggle To Survive In Somalia's Capital

"There are some incidents which happen. But those are isolated. The picture you are getting is largely exaggerated," he says.

Maj. Anthony has picked up considerable territory since September. He is getting help from Ahlu Sunna Wal Jama, a moderate Islamist group, and its 1,500-man militia — which fights side-by-side with Ugandan troops.

"Never ever compare ASWJ to al-Shabab — those are terrorists and we are just conservative Muslims who want their government to function," he says.

For Noor, this war isn't just about faith — it's also personal. He lost a house to al-Shabab six months ago.

"This destroyed building," he says, pointing to the house. "There we used to have our kitchen ... I married here. And I must go back to it."

That will be hard, as the house is now in al-Shabab territory. If Noor tries to visit, they'll kill him.

Like everything else in the battle for Mogadishu, the future of Noor's home is uncertain, and any resolution seems a long way off.