Accessibility links
'How The End Begins': The Threat Of World War III In his book, How The End Begins, Ron Rosenbaum examines how close and how often the world has reached the brink of another devastating nuclear conflict. With the rise of new nuclear powers and growing threats from rogue actors, Rosenbaum says the world is closer to nuclear war than it has ever been. 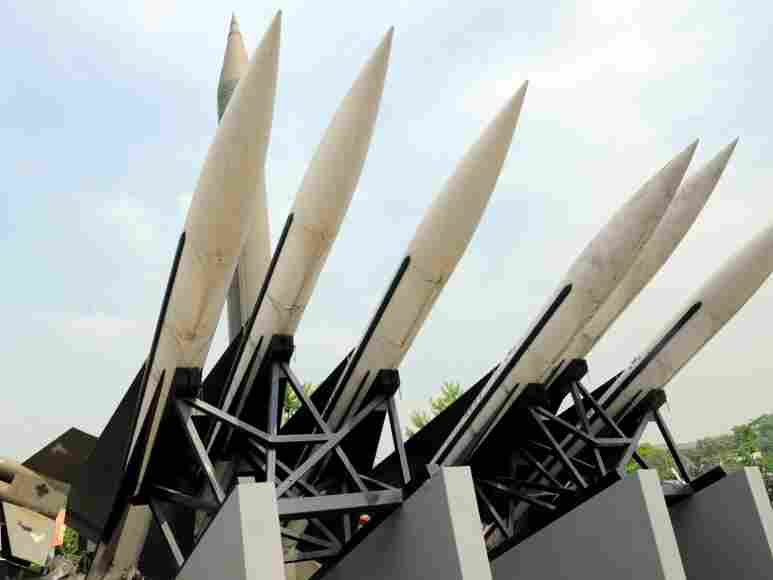 Replicas of North Korea's Scud-B missle, on display at the Korean War Memorial in Seoul. Ron Rosenbaum argues that the rise of would-be nuclear powers like North Korea may bring the world closer to another nuclear conflict. Park Ji-Hwan/AFP/Getty Images hide caption 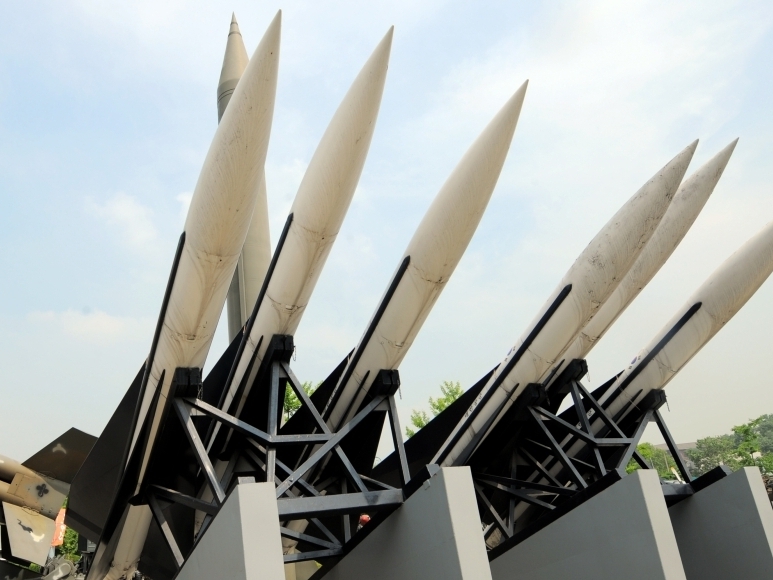 Replicas of North Korea's Scud-B missle, on display at the Korean War Memorial in Seoul. Ron Rosenbaum argues that the rise of would-be nuclear powers like North Korea may bring the world closer to another nuclear conflict.

During the Cold War, many people around the world lived in daily fear of a nuclear holocaust. But just two decades since the fall of the Berlin Wall, most Americans are more likely to fear an act of terrorism than nuclear annihilation.

But Ron Rosenbaum, author of How The End Begins: The Road To A Nuclear World War III, says we forget about the global nuclear threat at our peril. After 1991, Rosenbaum tells NPR's Neal Conan, "we took what's called a holiday from history ... I wrote the book as a warning, as a wake-up call that we need to address these questions that we've left behind with the Cold War."

Excerpt: 'How The End Begins' 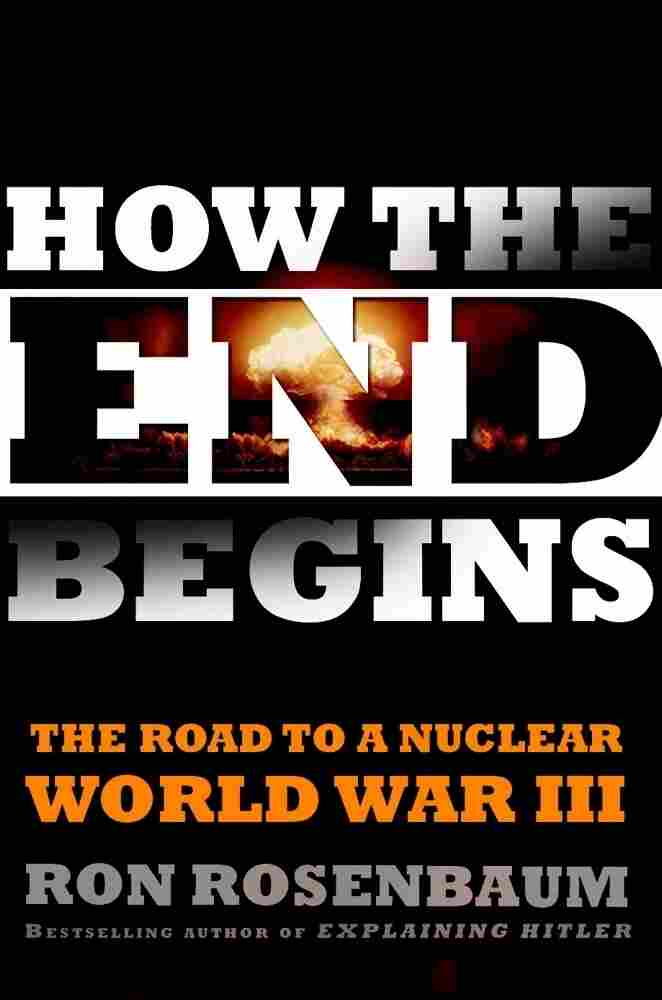 Chapter One: "We Came So Close"

The London-based Spectator is the oldest continuously published periodical in the English language, dating back to eighteenth-century London coffeehouse literary culture. It has survived as a respected general interest weekly, politically eclectic, culturally snobbish in a louche Old Etonian way, with highly regarded sources from within the old boy network in the leading British ministries.

But it rarely discloses anything as sensational and chilling as it did in the opening paragraphs of an article in the October 6, 2007, issue. It stopped me dead. It was not just the invocation of the jolting phrase "World War Three." It was the deadly serious way in which it was invoked.

In most of the post–Cold War period, the so-called "holiday from history" when many succumbed to a historical amnesia about the dailiness of nuclear dread, the term "World War Three" has had a ring of unreality. It usually sounded or read like an antiquated paranoid fear from a half-remembered past, the way we feel when we read of the "Black Plague," a relic of the bad old days that still nonetheless conveys a ghostly chill. We were worried about nuclear terrorism in 2007, but not nuclear war. Nuclear war: so retro.

But here, in these Spectator paragraphs anyway, nuclear war, "World War Three," was something that had almost just happened:

"So Close To War"
We Came So Close to World War Three That Day
James Forsyth and Douglas Davis
6 October 2007
On 6 September, when Israel struck a nuclear facility in Syria . . .

The article described what it called a "meticulously planned, brilliantly executed surgical strike by Israeli jets on a nuclear installation in Syria." It claimed the raid "may have saved the world from a devastating threat. The only problem is that no one outside a tight-lipped knot of top Israeli and American officials knows precisely what that threat involved." The article went on to say that this report has been confirmed by a "very senior British ministerial source," who'd said: "If people had known how close we came to world war three that day there'd have been mass panic. Never mind the [seasonal] floods or foot-and-mouth [disease] — [Prime Minister] Gordon [Brown] really would have been dealing with the bloody Book of Revelation and Armageddon."

There is no doubt, as was later confirmed, the raid happened. But how close did it bring us to World War Three? The question was a wake-up call, the return of the repressed — "the bloody Book of Revelation and Armageddon." We thought we had left that all behind.

But one could not read the story without war-gaming concatenations of regional nuclear wars that might cascade, through miscalculation or misperception, into global conflagration from such a close call.

It was not inconceivable.

Consider: the raid began with Israeli jets taking off after dark and proceeding north toward the northeast corner of Syria, toward a bleak barely habited stretch of land near the Euphrates. Subsequent reports indicated that electronic countermeasures (ECMs) were used by the Israelis to blind Syrian radar and antiaircraft installations as the planes crossed the border and approached their target.

Their target, later identified as a not yet operational nuclear reactor modeled on the Yongbyon reactor in North Korea — a uranium- fueled reactor that is capable of producing weapons-grade plutonium as a by-product — was destroyed. But the action could have triggered dangerous consequences. For one thing, the former Soviet Union, as well as the United States, is known to have satellite look-down capacity focused on trouble spots. There is little doubt the Russians would have picked up the Israeli jets' takeoff and — in the context of threats and counterthreats exchanged between Iran and Israel over the Iranian nuclear weapons program — they may well have warned the Iranians, with whom they have murky military and nuclear ties, that a potential Israeli attack on their nuclear facilities was under way. The Russians could easily have fired off an electronic warning to the Israelis not to attack Iran — and/or Syria — and implicitly or explicitly threatened "severe consequences" or some other euphemism for putting nukes on the table.

The Soviets, for instance, are reported to have sent an indirect nuclear warning to the Israelis at least once before — at the close of the 1973 war when the Israeli army was threatening to crush the Egyptian Third Army, the last barrier before Cairo. They dispatched an aggressive note to the United States warning of intervention if Israel persisted, which led the U.S. to raise its nuclear alert status to DE FCON-3 before Israel backed off. In other words, the Russians may have invoked that night what is known as a "nuclear umbrella" — or as U.S. nuclear savants more euphemistically call it, "extended deterrence" — in which a nuclear power uses nuclear threats to deter attacks against a nonnuclear ally.

Israel of course, though it has still not acknowledged it officially, is a substantial nuclear power with as many as two hundred warheads at its disposal, according to some estimates. Shortly after the Cold War, journalist Seymour Hersh reported that it had targeting contingency plans, which included sites in the Soviet Union in preparation for a retaliation should such a Soviet threat have been carried out.

Complicating matters, if the Russians had issued an implicit ultimatum to the Israelis to back off, the Israelis would likely have instantly relayed that threat to the U.S., once again involving two nuclear superpowers in a potential nuclear showdown.

While the United States and Israel deny any formal nuclear umbrella arrangement, there is widespread speculation that the U.S. has warned nations contemplating a nuclear strike on Israel of severe consequences, which implies anything up to and including nuclear reprisal by the U.S. The possible existence of this putative assurance was brought out into the open by presidential candidate, now secretary of state, Hillary Clinton, who declared during the 2008 primary campaign that the U.S. would "obliterate" Iran if it attacked Israel with nukes.

And so by the time the Israeli jets reached the northeast corner of Syria and turned toward the Syrian reactor on the Euphrates, threats and counterthreats may well have been zapping through the ether and suddenly both nuclear superpowers with approximately five thousand land-based nuclear missiles on "hair-trigger" alert were on the verge of — only one misperception or hasty overreaction, one degree of separation away — being drawn into a potential regional nuclear war.

Then there's the wild card, Pakistan, with its "Islamic bomb," which is shorthand for some sixty to one hundred warheads under the kind of loose, decentralized control that could allow a regional commander with ties to Islamic nations such as Iran and Syria to step in and set off another variety of regional nuclear war with equal potential for escalation.

All those signals, threats, and counterthreats flashing through the night could easily have been known to the "very senior" British minister quoted in The Spectator, assuming he had access to GCHQ, Government Communications Headquarters, the legendary British signals interception facility, which, in tandem with the U.S. government's NSA (National Security Agency and its spy satellite system), can listen in to just about everything, even to secret military encryptions, in near real time.

What the very senior minister was describing was perhaps the most perilous — and emblematic — crisis of the second nuclear age thus far: it is a new world in which the bipolar "stability" of the "balance of terror" has degenerated into a chaotic state of multipolar nuclear powers with less control and less restraint and a greater chance of touching off a regional nuclear war that could escalate to global scale.

"The world has arrived at a nuclear tipping point," a Carnegie Endowment for International Peace study warned. "We are at the tipping point," former Senator Sam Nunn, co-founder of the Nuclear Threat Initiative, has said, "and we are headed in the wrong direction."

Already India and Pakistan nearly used their nuclear arsenals against each other in 1999 and 2002. That was still bipolar. The Syria raid, however, was the most dramatic embodiment of the difference between the bipolar Cold War type of nuclear war close calls, and the new type of multipolar chain reactions that could reach critical mass in our new nuclear age. 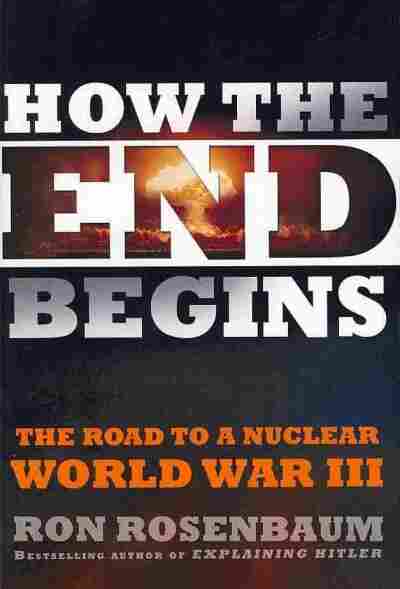 How the End Begins

The Road to a Nuclear World War III