Accessibility links
Reporters In Somali City Risk Life To Cover Story Reporting in Somalia's capital, Mogadishu, has become one of the most hazardous jobs in journalism. One of the city's best-known news organizations is Radio Mogadishu, where reporters brave death threats and more to get the story. 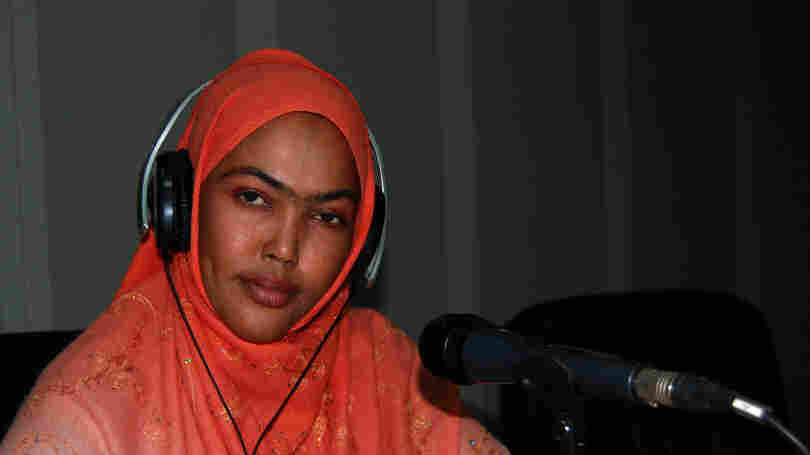 Sagal Siad reads the news on the government's Radio Mogadishu. Many of the reporters at the U.S.-funded radio station have been targeted for assassination by Islamic extremists. Frank Langfitt/NPR hide caption 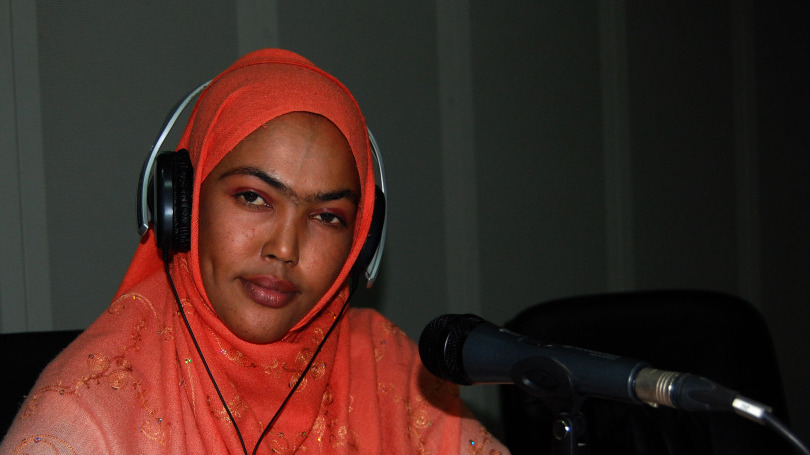 Sagal Siad reads the news on the government's Radio Mogadishu. Many of the reporters at the U.S.-funded radio station have been targeted for assassination by Islamic extremists.

Press conferences are usually pretty tame, but not in Somalia's bullet-riddled capital, Mogadishu.

When a local faction held a briefing a couple weeks ago, its enemies responded with mortars, wounding two journalists.

One of the city's best-known news organizations is Radio Mogadishu, where reporters brave death threats and more to get the story.

This afternoon, Sagel Siad is preparing for the 2:30 afternoon newscast. She sits down in front of a microphone in a glassed-in studio that seems like any other. The major difference: It's in a walled compound guarded by troops with machine guns. The director points his finger and Siad — wearing an orange hijab and lipstick — launches into the day's news.

Expats Return To Somalia In Hopes Of Aiding Change Feb. 28, 2011
Many Struggle To Survive In Somalia's Capital March 1, 2011
On The Front Lines Of Battle For Mogadishu March 2, 2011

The big story: Militiamen shot up a cultural festival, the first the one the city has held in ages. The government has charged Mogadishu's former mayor and warlord with the crime.

Stories like this are standard fare at Radio Mogadishu. The station provides news, music and talk shows in a city where doing so can get you killed. Abdirahim Isse Addow, the station's director, says the morning traffic report includes things like shootouts.

"Always in the morning, the people listen to the radio. ... We start with road X and road Y — there is fighting going on and we don't say keep away, but the people know about it and don't go," Addow says.

Radio Mogadishu is run by Somalia's beleaguered transitional government. It receives most of its funding from the United States. Islamist insurgents called al-Shabab are trying to topple the regime and threaten anyone who helps the station.

Last year, al-Shabab mistakenly grabbed a woman who looked like Siad and prepared to cut her throat.

"They [caught] her and they closed her eyes, they want[ed] to kill her. They say, 'What's your name?' She say, 'My name is Khali'; she was working in HornAfrik Radio — she say, 'Please I'm not Sagel, don't kill me,' " Siad recalls. 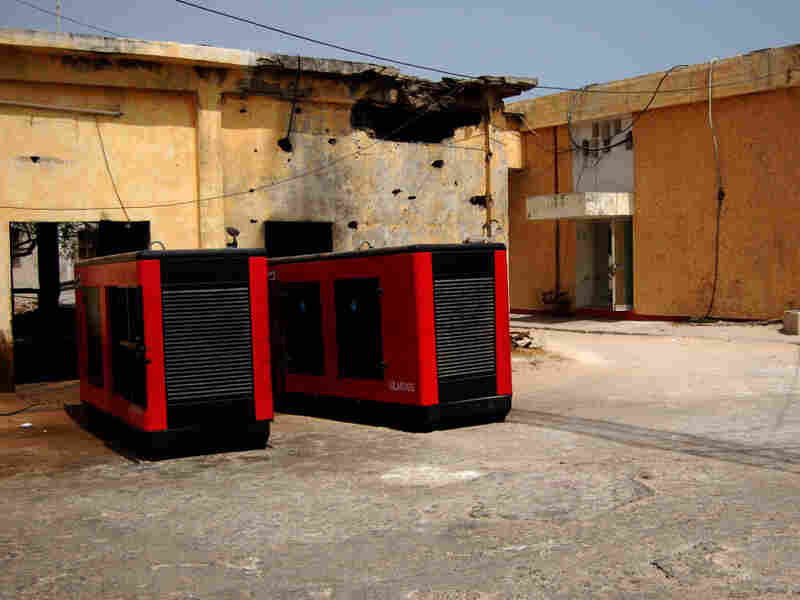 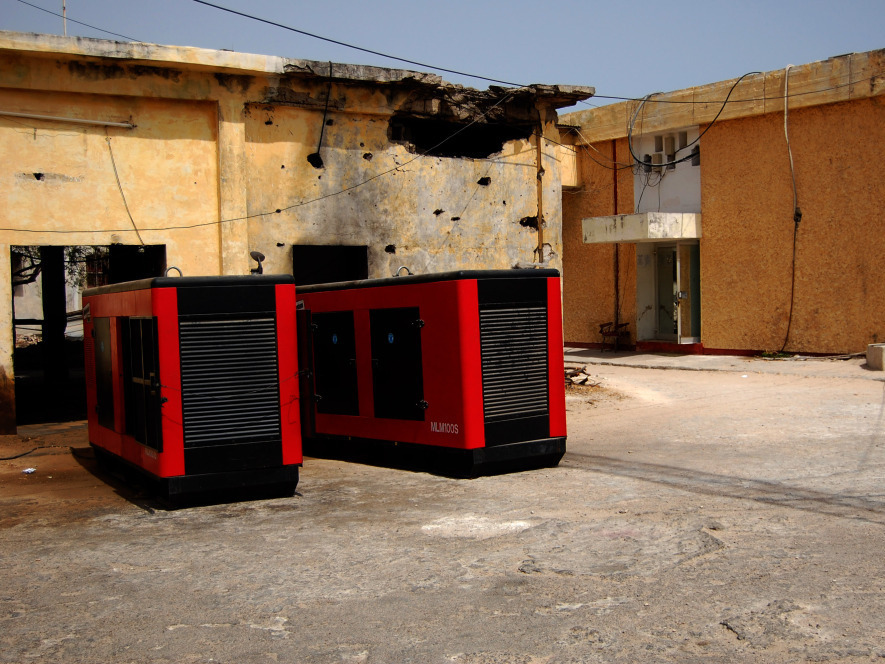 In a city where the government provides almost no services, Radio Mogadishu runs off two huge diesel generators.

Al-Shabab called the director at HornAfrik — another local radio station. He confirmed the woman's real identity and they let her go. Al-Shabab pushes an extreme version of Islam. The group favors public amputations, stoning of adulterers and bans movies, bras and soccer. Al-Shabab threats have turned Siad into a virtual shut-in. Like most employees at Radio Mogadishu, she must live inside the government compound.

"You can't go anywhere, we are a target," she says. "Al-Shabab calls us anytime, they send us messages — they say, 'We will kill you; we will forgive you if you come [with] us — no problem. We will marry you ... you stay with us,' blah, blah, blah," Siad says.

Radio Mogadishu has eight correspondents in the city. They travel with an armed guard when reporting. One, Sheik Nur Mohamed, was shot to death when he tried to visit his family last year.

Abdimahad Hussein Abtidon has been a producer and reporter at Radio Mogadishu for several years. His home for the past two years has been inside the walled government compound that houses Radio Mogadishu. There are no light bulbs; three mattresses crowd the floor; and clothes hang from nails.

Abtidon points to a hole in the wall just above his mattress.

"You see here? It's a bullet. It gets through here," he says. "I was sleeping at that time."

Abtidon covers everything from press conferences to the front lines. He makes $150 a month and says he enjoys the work and camaraderie.

In the evenings, he relaxes with other reporters watching Somali music videos on a TV. They sit around chewing khat, a leafy stimulant hugely popular here. Abtidon says dealing with al-Shabab, which means "the youth" in Arabic, is difficult. Even former schoolmates have joined the movement, thus turning on him.

"When they heard I'd become one of the Radio Mogadishu journalists, they burned my house," Abtidon says.

Fortunately, his family had already fled and was not home. Abtidon's old classmates — he says he recognizes their voices — continue to call with threats. However, he says he believes in the First Amendment and democracy — even if it doesn't exist in Mogadishu.

He refuses to quit.

Not everyone is so bold. After five years, Siad has had enough. This spring, she hopes to move to a neighboring country, Djibouti. Siad still wants to work as a journalist; she just wants to do it in a safer place.