Accessibility links
'Anna Nicole' Brings Sex And Drugs To The Opera Pop culture and celebrity are the backbone of the infamous British tabloid media — but they're probably not what you'd expect to see at the prestigious Royal Opera House in London's Covent Garden. 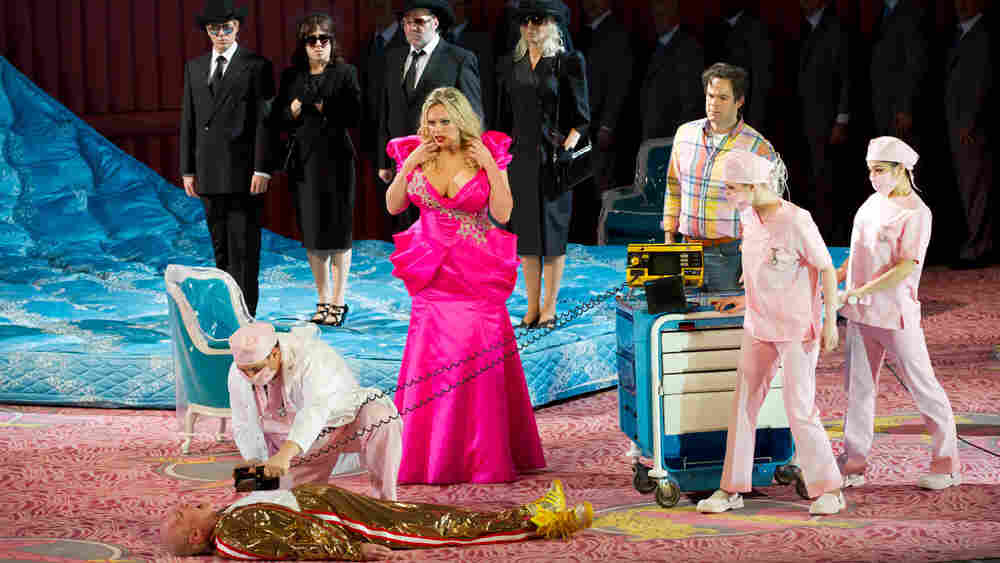 Sex, drugs, plastic surgery and celebrity are the backbone of the infamous British tabloid media. But they're probably not what you'd expect to see at the prestigious Royal Opera House in London's Covent Garden.

This bastion of high culture has played host to many an operatic giant — Mozart, Monteverdi, Puccini, Joan Sutherland and Maria Callas, to name a few.

So it may have come as a shock to opera traditionalists when they heard about the latest addition: playboy model and reality TV star Anna Nicole Smith. Her turbulent life and tragic demise have been transformed into a new opera, Anna Nicole, which opened last month.

On its website, Covent Garden states that the opera is "provocative in its themes, exciting in its bravura style, and thrilling with its sheer contemporary nerve". 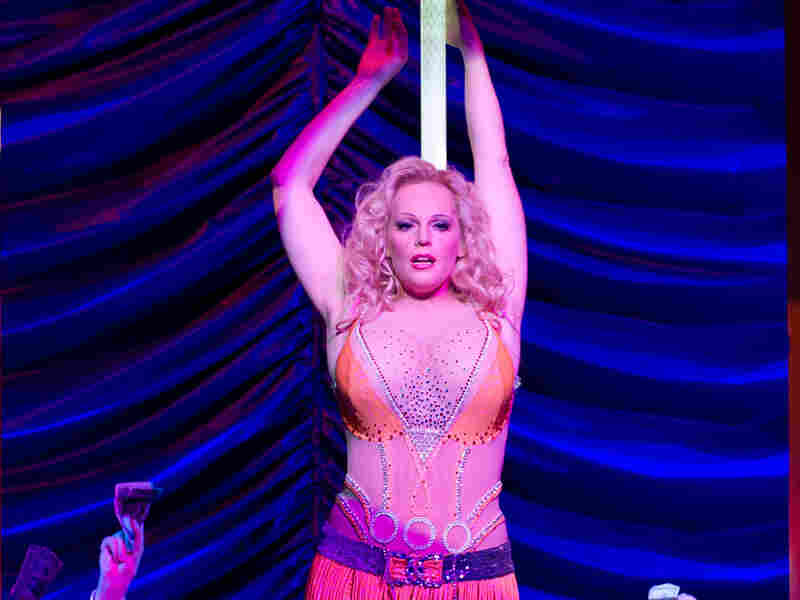 "I think they were slightly in shock at first," said librettist Richard Thomas, "but they came round to the idea very quickly."

Thomas is better known for Jerry Springer: The Opera, which was — confusingly — a musical.

"I love subjects which are easily dismissed. ... Most people would dismiss the story of Anna Nicole as, you know, 'This is fodder,' but I quite like these because along the way you find some lovely comedic gems and hopefully you stumble across some fantastic universal themes and truths," he said.

Smith was a Playboy model, actress, reality TV star, celebrity — and global brand. Her adult life was a public spectacle, played out in the media spotlight and spurred on by an international following with an insatiable appetite for celebrity.

She was, perhaps, best known for marrying octogenarian billionaire J. Howard Marshall II, who was 63 years her senior. After his death, she fought a long, costly and inconclusive legal battle over her right to his estate. She went on to star in her own reality TV show, and eventually died from an overdose of drugs in 2007 at age 39.

Thomas said there's something universal about her story.

"She gets a bit lucky and then makes some bad choices ... and that's it. I think it's a universal tale — made some bad choices, made some worse choices, then ran out of choices — that's a tale most people can empathize with," he said.

Their aim, agreed British composer Mark-Anthony Turnage, is to win sympathy. For them, Smith was as much a victim of the industry she worked in as a manipulator of it.

"The opera's in memory of her, and we want to love her and be sad when she dies. ... It's not trashing her at all," Turnage said.

The opera is in memory of her, and we want to love her and be sad when she dies. ... It's not trashing her at all.

"I hope people will be sympathetic — we've failed in a way if you're not. If you come out of there thinking, 'Oh, she's just a cartoon character, she's a bit of an idiot,' then we've totally failed."

"There are many versions of Anna Nicole — what's interesting about the character ... is it's very hard to pin it down. There are elements to her which are intensely dislikable and manipulative. ... But at heart there's something fabulous and eccentric about her, and once we'd decided that ... you've got a take on her, which is likable and sympathetic."

They did admit, though, that there is something inherently comical about a buxom 26-year-old with an 89-year-old husband.

Mix that with a pole dancing scene, some swearing (according to Thomas, it's not gratuitous, but there are "about 20 F words, one C word, and three bastardizations of the C word, which I've invented"), and juxtapose this with the setting of the Royal Opera House, and you have something quite unusual.

"Opera is an absurdly beautiful medium," Thomas said, "and it also soaks up extremities really well ... so a very swearing crazy opera singer is funny in the medium of opera in a way that it wouldn't be very funny as a play."

Those going in the hope of "something a bit different" may enjoy noticing details such as the head of Smith placed in a royal medallion above the stage, next to that of Queen Elizabeth. 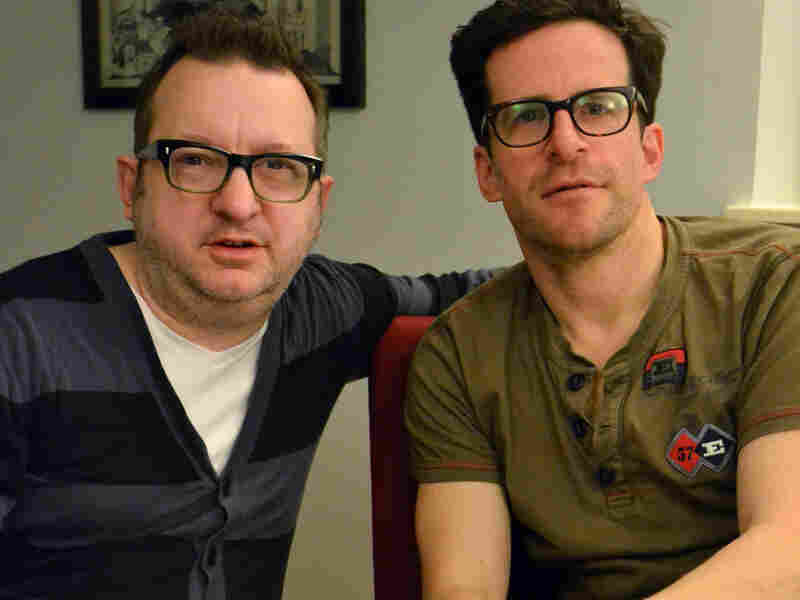 But both Turnage and Thomas are adamant that what they have created will not be offensive.

"I think people will be surprised when they see the show," Turnage said. "The last part is very serious and very sad. ... It almost becomes like a traditional opera."

New operas haven't always gone down well. One success story was Nixon in China by composer John Adams, which followed Nixon's official meetings with Mao Zedong in 1972. But there have been a few flops, too — Princess Diana, Col. Gadhafi.

So what do the critics think of this one?

"The problem is, I'm not sure, to be honest, that Anna Nicole really earns her stripes as a genuine tragic figure," said Matt Wolf, theater critic for the International Herald Tribune.

"She's pathetic, and you feel for her because her life must have been ghastly, but pathetic and tragic aren't quite the same thing," he said.

Wolf praised the production's critique of celebrity, but he's not convinced by Smith as a symbol of something rotten at the heart of American culture.

"I don't necessarily think that every single American who goes off the rails, suffers an unfortunate demise, or who has aspirations to glory and grandeur necessarily represents the American dream gone awry," Wolf said.

So is this a case of the British being anti-American — again?

"Some may think it's anti-American, but I don't anymore than Jerry Springer: The Opera was. ... You could say it's a tribute — here's this Brit Thomas who has given us Jerry Springer and now Anna Nicole, and you think, 'Who's gonna be next? OJ Simpson?' " Wolf said.

After all the hype and mystery, the British media have mixed feelings: At best, it's "flamboyantly vulgar and fabulously entertaining," from the Daily Telegraph, at worst, "Fright at the Opera," from the Daily Mail, or "two-dimensional," from the Guardian.

But whether critically acclaimed or not, there are definitely rumblings of a new, younger crowd on the scene. Tickets, which are cheaper than normal — between $6 and $120, according to the website — have sold out, and Thomas estimates that 30 percent to 40 percent of them have gone to operatic first-timers.

Even the great British actor Derek Jacobi, who confesses he's not a big fan of opera, said this particular story was a "wonderful" choice that could get him to the theater.

It's too early to say if this popular appeal will lead to a revival, or a voyage across the Atlantic. But it has a lot of heads turning and people chattering.

Thomas has his own way of knowing the chances of success.

"One sure indicator that it's not going to be revived is when they burn the set," he said. "That's when you know it's over."