Accessibility links
Grant Achatz, Head Chef At Alinea, Battles Tongue Cancer Two years after opening his award-winning Chicago restaurant Alinea, chef Grant Achatz was diagnosed with tongue cancer. He describes losing and regaining his taste in Life, on the Line. "My palate developed just as a newborn," Achatz says. "I don't recommend it, but I think it made me a better chef." 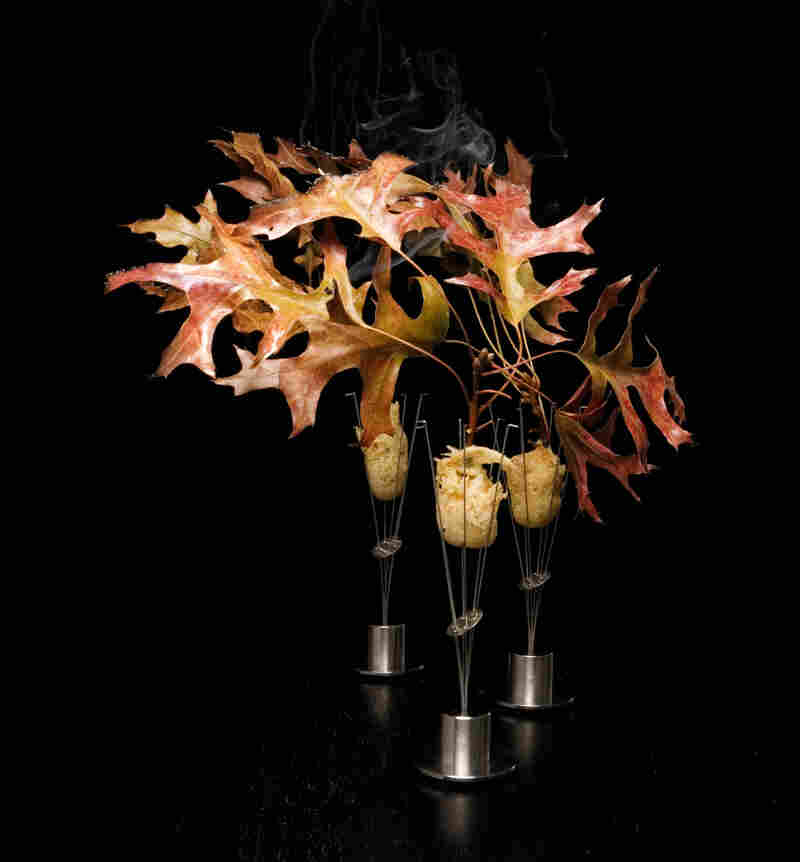 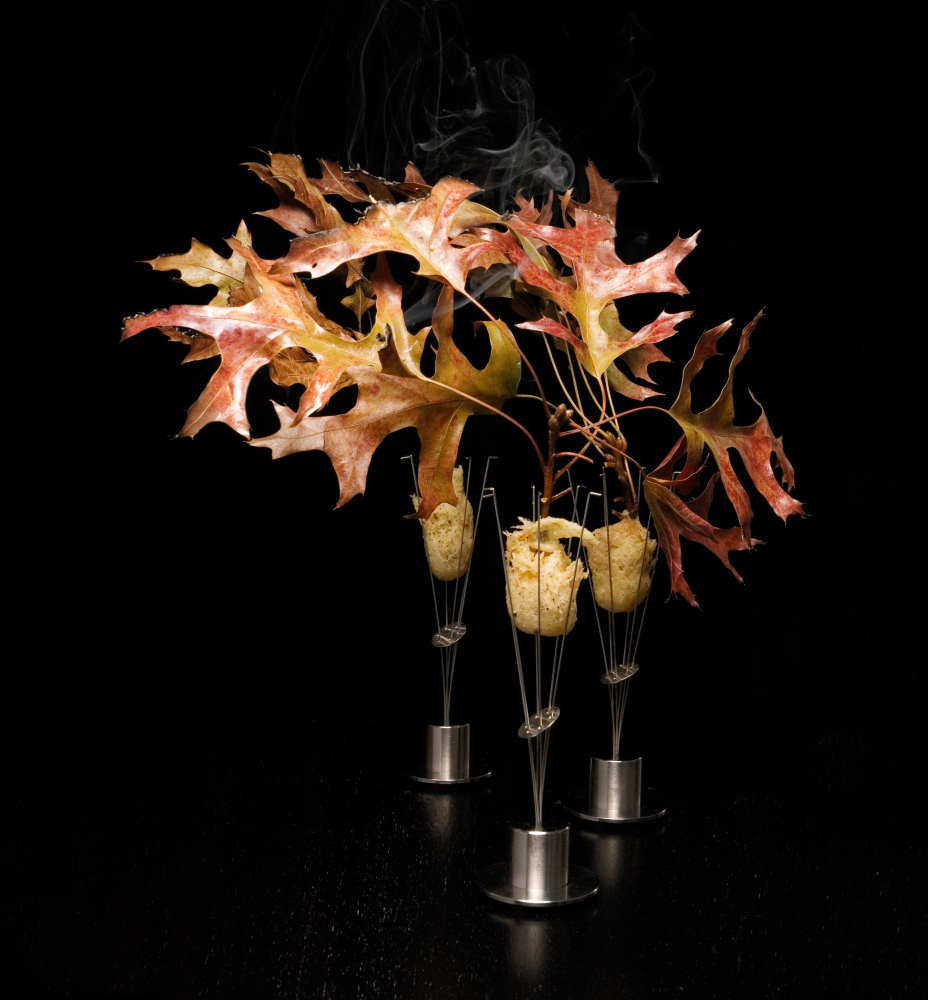 Alinea, which opened in 2005, was named the best restaurant in America by Gourmet Magazine in 2006. The restaurant's co-founder and head chef, Grant Achatz, is one of the leading members of the molecular gastronomy movement, which uses unexpected flavor combinations and exotic laboratory tools to create foods based on the molecular compatibility of ingredients.

"What makes the food that we do at Alinea so interesting on the outside is that we really don't let ourselves say no to an idea," Achatz says. "When we start looking at things really critically or even very simply, we realize that there's more than one way to actually get the same results ... You're deconstructing the components of a course and putting them back together."

Playing with unexpected flavors and scents plays a big part in Achatz's kitchen. Some of Alinea's dishes are served alongside a pillow case with tiny holes in it, designed to release certain fragrances while diners eat.

"We've done firewood ashes, we've done leather, we've done grass," says Achatz. "There's a lot of smells that you can't necessarily consume. You're not going to go out and chew on a baseball glove. But, in a lot of ways, a lot of smells that aren't necessarily edible smell good, and they remind you of certain aspects of food. So making those associations with what smells good or smells a certain way and pairing that with actual edible ingredients is one avenue that we take creatively."

In 2007, Achatz lost his own ability to taste. He was diagnosed with stage 4 tongue cancer, which metastasized to both sides of his neck. His surgeons told him they were going to cut out his tongue and replace it with muscle from another part of his body. With the surgery, Achatz only had a 50 percent chance of surviving beyond two years. But, he says, he was even more afraid of losing his ability to taste and eat. 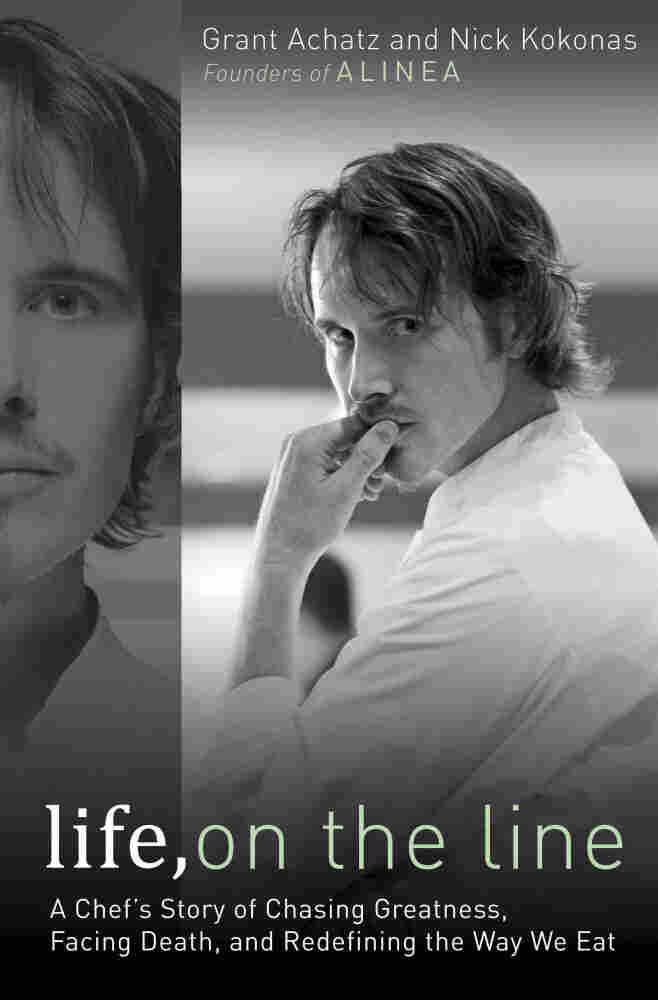 Life, on the Line: A Chef's Story of Chasing Greatness, Facing Death, and Redefining the Way We Eat
By Grant Achatz
Hardcover, 400 pages
Gotham
List price: $27.50

"I lived my whole life in the kitchen," he says. "Not only that, but it's the passion, it's the love for cooking and food. It's dictated my entire life — every aspect of it. So, in some ways, the thought of not being able to do that anymore radically affects your life."

Achatz found a clinical trial at the University of Chicago that agreed to treat him with radiation and chemotherapy. The radiation treatments burned his tongue, shed the lining of his esophagus — and completely destroyed his taste buds.

"It was very strange to not be able to discern any flavor at all," he says. "It's funny because, clearly, you know you have to eat to live. But even knowing that, for me, there was no reason to eat. I had no interest in eating whatsoever. I would put something in my mouth — say a vanilla milkshake — and it tasted like nothing."

Achatz's cancer is now in remission. After his treatment ended, his ability to taste came back — but slowly. His perception of different flavor combinations — sweet, salty, bitter — came back one flavor at a time.

"I started from zero, and the first thing back was sweet," he says. "So my palate developed just as a newborn — but I was 32 years old. So I could understand how flavors were coming back and how they synergized together. ... It was very educational for me. I don't recommend it, but I think it made me a better chef because now I really understand how flavor works."

Achatz was named Best Chef in America in 2008 by the James Beard Foundation. He is the author of two books, the memoir Life, on the Line and the coffee table-style cookbook Alinea. He plans to open a new restaurant in Chicago. Called Next, it will completely change its food and style every few months — allowing Achatz to experiment with different ethnic cuisines and periods in time.

"Some of the courses served at Alinea are meant to intimidate because, if you think about eating, we do it two, three, four times a day since we're born, basically. And the act of eating — the mechanics of eating — become very monotonous. So literally you're either picking up a fork, a spoon, and you're eating from a plate or bowl with the same motion every time. So if we can break that monotony, then we get you to take notice of the moment, and now you're thinking about the food. It's making you feel a certain way. Then we've won."

On slowing people down so they taste their food

"Alinea is not the type of restaurant where you go if you're in a hurry. Really, it's about enjoying that three-hour block of time and reflecting on the food, having great conversation with your dining companion. Nobody really needs to eat like that. You need to eat to live. But you certainly don't need to sit down and have a 200-hour, 23-course meal. It's entertainment. It's about having a great time, processing it, thinking about it. We like to think that the food is, in a lot of ways, an intellectual exercise. Sitting through a three-hour meal and having all these feelings — whether they be about the actual food or whatever the occasion is or who you're eating with — [it's] kind of checking yourself out of the pace of life for three hours and enjoying yourself."

"It allows us to freeze things that normally don't freeze. For instance, if you take a cup full of olive oil and put it in your freezer at home overnight, you're going to wake up the next morning and it's still going to be liquid because the freezing point of olive oil is very, very low. You take a tablespoon of that olive oil and you put it on top of the anti-griddle, and it will instantly freeze. We've made olive oil lollipops, and it was savory and kind of floods the palate with this smoky paprika and roasted red pepper oil."

On playing with flavor

"If I present to you something that I call 'root beer float,' but it's not in a glass — it's on a plate — it's not liquid — it's solid — and it's not brown — it's completely clear — and I say 'root beer float,' and you look at it and you look at me and you think I'm crazy, I think that's a good thing, because now you're engaged. We're engaging you on so many different levels. And then the payoff is when you put that perfectly clear bite-size cube in your mouth, it tastes like a root beer float."

Excerpt: 'Life On The Line'

Life, on the Line: A Chef's Story of Chasing Greatness, Facing Death, and Redefining the Way We Eat
By Grant Achatz and Nick Kokonas
Hardcover, 400 pages
Gotham
List price: $27.50

TRY OUT AT THE LAUNDRY

I entered the French Laundry kitchen and saw a tall lanky man sweeping the floor. His back was toward me and he didn't hear me enter, so he kept doing his job for a few seconds. I peered past him looking for chef Keller, waited a few seconds for the sweeper to notice me, and when he didn't, approached him. "I'm Grant Achatz, here for a tryout. Is chef Keller in?"

He stuck out his hand and shook mine vigorously with an exaggerated up and down motion.

I thought to myself, "Holy shit. He's the first one here, and he's sweeping the floor. What kind of restaurant is this?"

"I'm going to set you up with Kevin. He's in the back putting away produce, but he can show you around and get you started."

"We're going to cut some brunoise. You okay with a knife?"

Kevin demonstrated the tiny dice, pushed the pieces over to the far corner of my board and said, "Leave those there for a reference."

I began cutting the turnip, carrot, and green leek tops into the miniature cubes at a good clip. Another cook approached my cutting board, looked at my work, then back at me. He spoke very slowly, making sure the others around us heard him. "Hi. I'm Josh."

"Grant is from Trotter's," Kevin spoke up on my behalf.

Josh immediately looked down at my board, poked his finger into a pile of my carrot brunoise and pulled out a single piece from the hundred that was cut on a slight angle to form an inconsequentially uneven cube.

"Kevin, you had better watch this guy. His knife skills aren't so good." Josh looked me in the eye and said, "You might want to start over." He slowly walked away.

As we finished up the brunoise, Kevin headed over to chef Keller, who was busy cleaning foie gras for torchon, and inquired what he should have me do next. "Have him peel and slice tomatoes for Eric," he said.

Eric Ziebold was manning the garde manger station, working on the components for a sliced tomato salad. We exchanged introductions and he instructed me to blanch, peel, and slice the Early Girl tomatoes using a deli meat slicer.

I made quick work of peeling them and headed to the slicer.

With every stroke across the slicer the tomato juice would run down toward the bottom of the blade then violently spray at me. I sliced thirty tomatoes, seasoned each layer with minced shallots, olive oil, sel gris, and black pepper, then meticulously stacked them back together so that they would appear to be a whole tomato. In the process, I looked like an ax murderer, my chef coat covered with tomato-juice splatter.

Chef Keller walked by, looked me up and down, and deadpanned with a wry smile, "Hey. Next time why don't you try to get a little more tomato all over yourself?" He paused a few beats for effect and smiled again. "Go change your coat."

I couldn't help but smile, even though I was embarrassed. 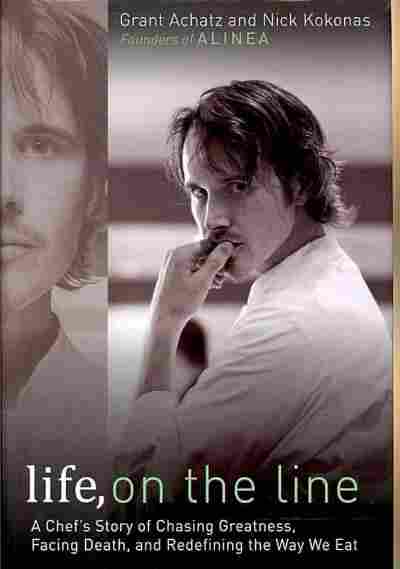 Life, on the Line

A Chef's Story of Chasing Greatness, Facing Death, and Redefining the Way We Eat

by Grant Achatz and Nick Kokonas

Title
Life, on the Line
Subtitle
A Chef's Story of Chasing Greatness, Facing Death, and Redefining the Way We Eat
Author
Grant Achatz and Nick Kokonas