Accessibility links
Providence Mayor Defends Firings As Teachers Protest City officials say they had no choice but to dismiss the city's entire teaching force because of a massive deficit. But some say the decision was a political one and had nothing to do with solving a fiscal crisis. 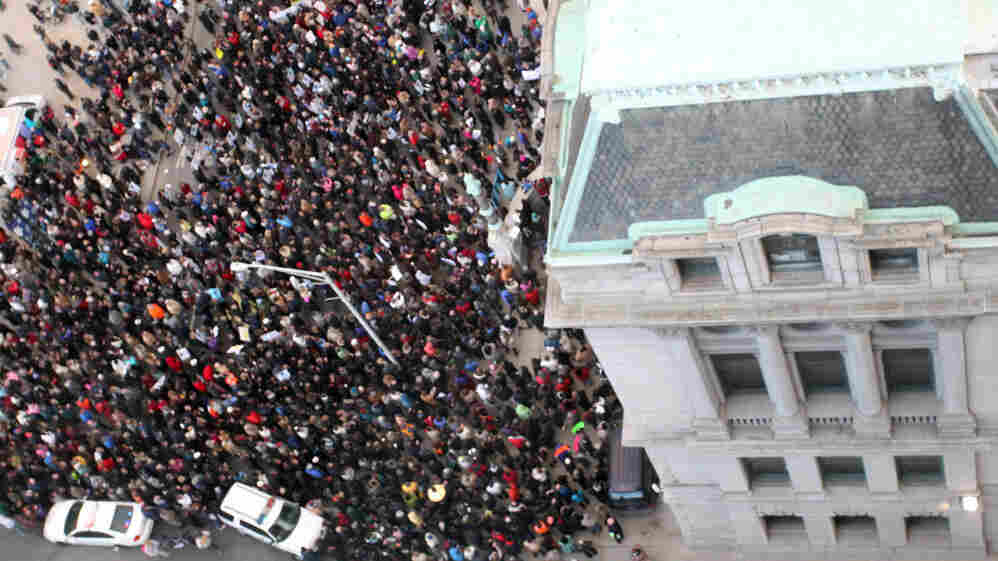 Teachers and union members rally on the steps of Providence, R.I., City Hall on Wednesday to protest the firing of the city's entire teaching force. Stew Milne/AP hide caption 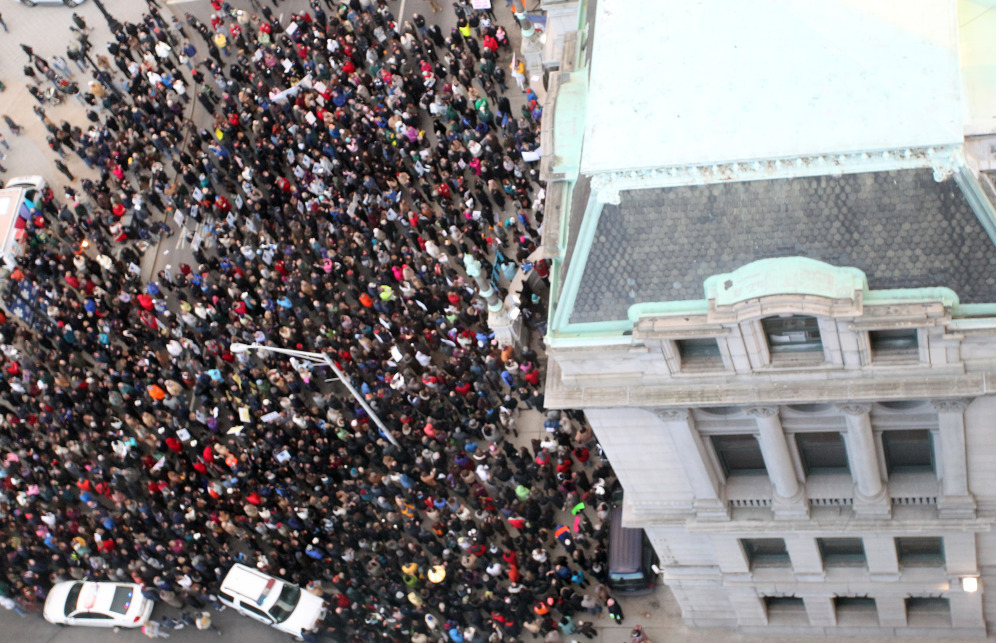 Teachers and union members rally on the steps of Providence, R.I., City Hall on Wednesday to protest the firing of the city's entire teaching force.

About 1,500 people jammed the street in front of City Hall in Providence, R.I., on Wednesday to protest last week's dismissal of the city's entire teaching force.

"I thought the only insanity was in Wisconsin, not in Rhode Island," Randi Weingarten, president of the American Federation of Teachers, told the crowd, which raised signs and banged drums.

Weingarten calls the terminations insane, but city officials say they had no choice: The city is facing an estimated deficit of more than $100 million for the next fiscal year, or roughly 20 percent of the city budget.

Providence's new mayor, Angel Taveras, says he is considering school closures and layoffs for many city workers, but teachers are feeling the pain first, because of a state law that requires districts to notify teachers by March 1 if their jobs are in jeopardy. He says he chose terminations instead of layoffs because it ensures that teachers the city can't afford will be completely removed from the city payroll.

"With a layoff, for various reasons, you can be responsible for paying teachers who are not teaching in a classroom," he said. "In addition to that, if they go into the substitute pool, you're paying them their full pay and benefits, and that's costing an enormous amount of money. I can't allow the taxpayers to be on the hook for paying teachers who are not teaching."

But union leaders point out that the dismissal of nearly 2,000 educators means the city can ignore seniority rights as it re-staffs classrooms.

"By firing all of the teachers, Mayor Taveras is not solving an educational or a fiscal problem," Steve Smith, president of the Providence Teachers Union, said. "He's making a political decision to take control and silence workers."

Those workers serve more than 23,000 students in what is by far Rhode Island's largest school district. About 80 percent of Providence students are Hispanic and black, and many come from low-income families. Like urban districts around the country, Providence struggles with some of the lowest test scores in the state.

"Firing the teachers is not going to help, and it's not going to get any better," Emmanuel Rivas said as he dropped off his nephew at school. He said he worries that this latest controversy will only make things worse.

"Myself, I got five nephews that are currently staying with me ... so what's going to happen to them? Are [the teachers] fired for good, are they going to go on strike?" he said. "Beats me, man."

Yet parent Christie Chase says she sees room for optimism. She says this is an opportunity to end the longstanding practice of giving staffing priority to teachers who have been on the job longer.

"This is an unfortunate way to get there, but something drastic does need to be done, and I think this will force the issue of how you evaluate and hire teachers," she said.

Providence officials say their goal is to cut the budget while doing the best they can for city schoolchildren, and they say they will start rescinding some teacher terminations as early as this month. Teachers union leaders say the dismissals are illegal, and they're ready to take the battle all the way to the state Supreme Court.