Accessibility links
Gadhafi's Dream To Wear Africa's Crown The Libyan leader has had a checkered relationship with the African continent over the years. His pursuit of a United States of Africa — with himself as the continent's self-styled King of Kings — is one of the mercurial colonel's more recent projects. 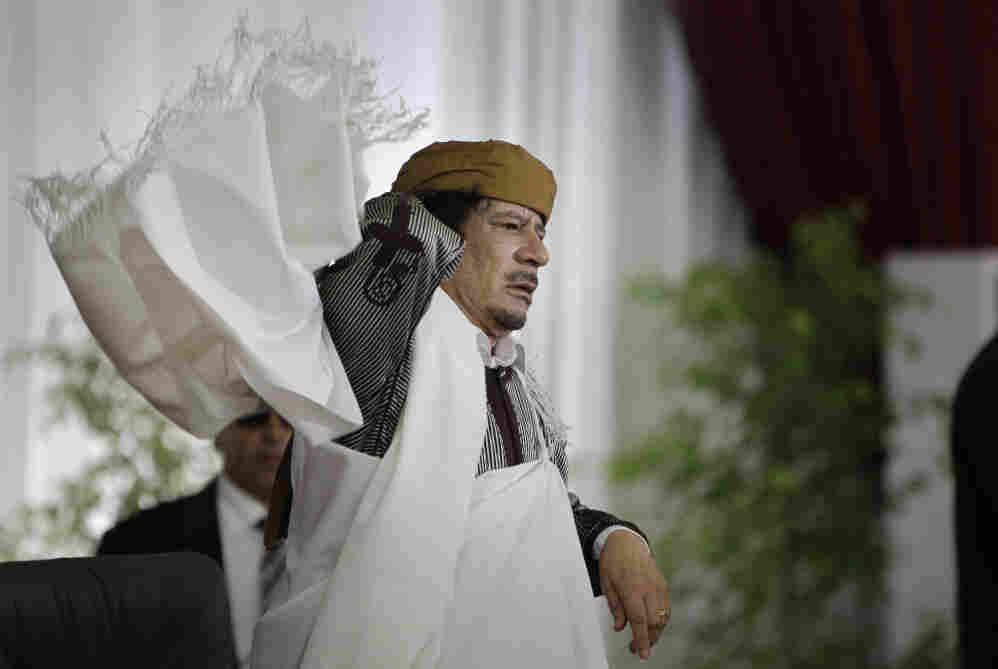 Libyan Leader Moammar Gadhafi adjusts his gown after speaking to supporters and the media in Tripoli on Wednesday. Ben Curtis/AP hide caption 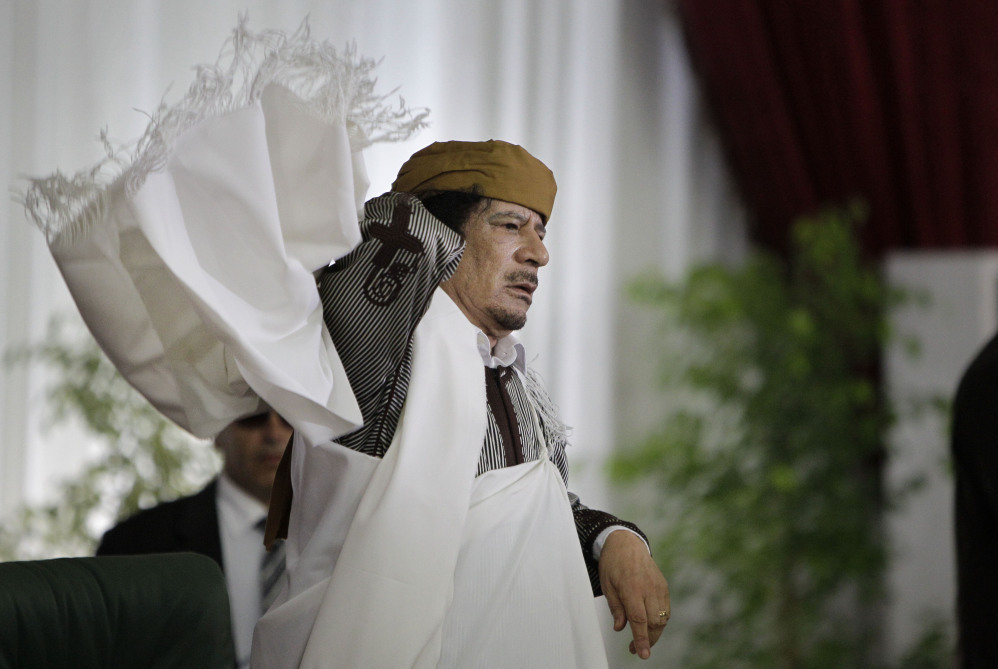 Libyan Leader Moammar Gadhafi adjusts his gown after speaking to supporters and the media in Tripoli on Wednesday.

Libyan leader Moammar Gadhafi has had a checkered relationship with the African continent over the years. His pursuit of a United States of Africa — with himself as the continent's self-styled King of Kings — is one of the mercurial colonel's more recent projects.

"Shortly after Operation El Dorado Canyon, where the Americans bombed Moammar Gadhafi's headquarters [in 1986], he backed away from the Arab League, and the Arab League shunned him, and he declared that he wanted to be the emperor of Africa," says Syracuse University law professor David Crane. "He invited various individuals who were willing to be his surrogates, and he trained them in various terrorist camps throughout Libya and then sent them south to West Africa to do his bidding."

"Moammar Gadhafi's plan was a geopolitical one. He intended to take over West Africa, placing each of these surrogates in various countries," Crane says.

But political analyst Issaka Souare of South Africa's Institute for Security Studies says Gadhafi's legacy in Africa is mixed — that he blows hot and cold in his dealings with the continent, meddling in its civil wars while mediating in its conflicts.

"You could describe Gadhafi both as an arsonist and a firefighter. He actually contributed to the destabilization of many African countries: Chad, Sudan, Liberia, Sierra Leone," Souare says. "But he also came to play a role in brokering peace between the warring factions in some of the same countries that he was destabilizing."

Gadhafi has dominated and helped fund the African Union since its creation in 2003. He's well known in Africa for his fiery anti-Western speeches and crisscrossing the continent with his bespoke Bedouin tent. Analysts say Gadhafi distributes Libya's oil largess among his brother leaders. To date, few African heads of state have spoken out publicly against him.

The African Union last week issued a statement saying it deplored what it called the disproportionate use of force. Botswana went further and cut diplomatic ties.

"Ordinary protesters were being shot at, and then he's breathing fire on his own people," Botswana's foreign minister, Phandu Skelemani, says. "You don't expect a leader to come out and say, 'I'm going to kill the lot of you,' saying people are cockroaches and rats which must be eliminated and killed."

The unrest in Egypt, Tunisia and Libya has not sparked similar revolts in sub-Saharan Africa. Uganda's opposition called for a popular uprising to keep President Yoweri Museveni from extending his 25-year rule. Museveni dismissed the call and said he had a solution.

"Very simple: Just lock them up," he said. "Simple. In as humane a manner as possible, bundle them into jails, and that will be the end of the story."

"If you even attempt to talk about something like this, then we'll come and get you," she says. "The government has become so paranoid about the possibility of mass protests, because of what is happening in other parts of the continent."

But the soundtrack of the regional uprisings continues to reverberate around the continent.