Accessibility links
New Republic: Newt Gingrich, Chameleon Candidate Former House Speaker Newt Gingrich is expected to announce today that he is exploring a decision to run for presidency. Ed Kilgore of The New Republic analyzes Gingrich's politics over the years, and argues that if Gingrich were to decide to run, his skilled ability to constantly adapt his politics to the needs of the Republican party could be on his side. 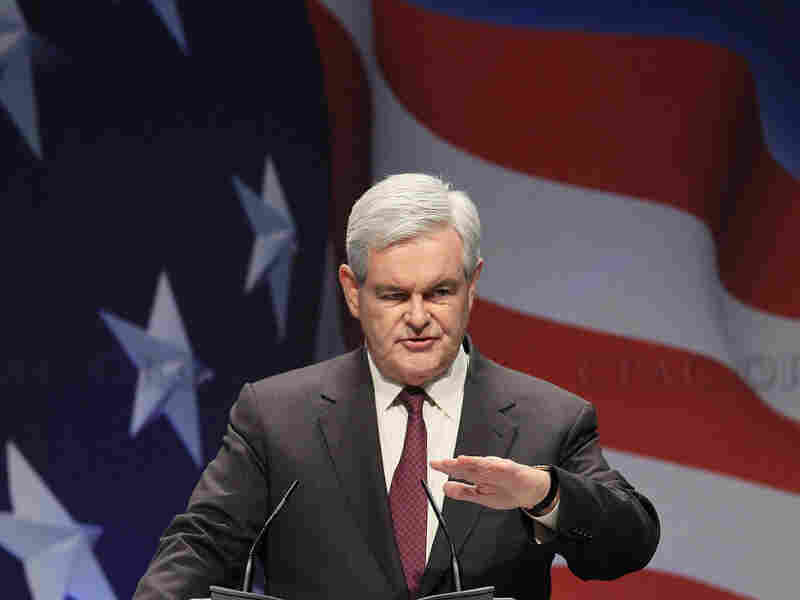 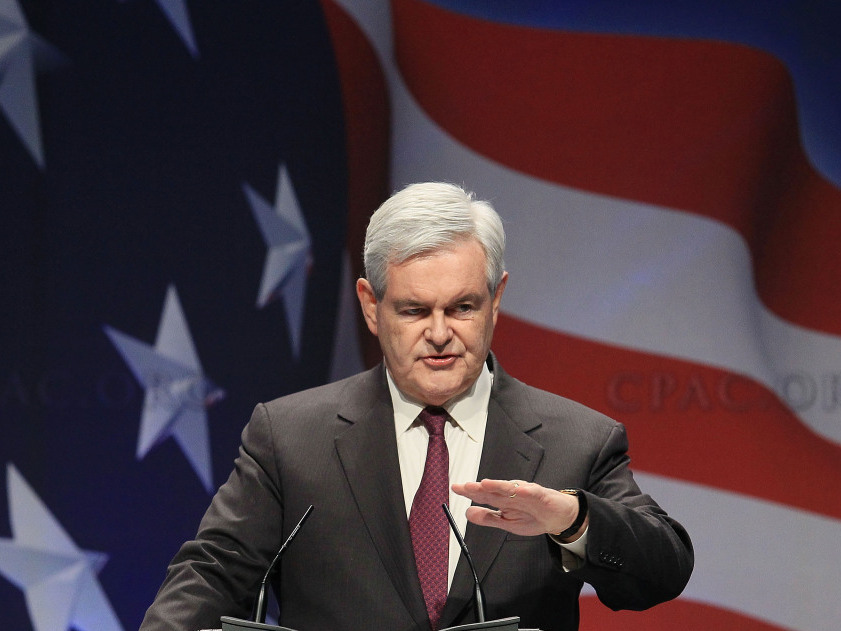 Former Speaker of the House Newt Gingrich (R-GA), speaking at the Conservative Political Action conference (CPAC), last month in Washington, D.C. Gingrich is currently toying with the decision to run for presidency.

After many feints in this direction dating back to 1996, Newt Gingrich seems to be finally preparing a run for president. Generally, he is not being taken as seriously as potential candidates like Sarah Palin, Mitt Romney, and Mike Huckabee — or even D.C. insider heartthrobs such as Haley Barbour, Mitch Daniels, and Chris Christie. I agree with this assessment of Gingrich's potential, to an extent; he's the opposite of a fresh new face, and the guy's baggage rivals Charlie Sheen's. Yet having carefully watched Gingrich up close since he was a Rockefeller Republican in the 1970s, I also know that he is a master of tactical reinvention: a microcosm of the modern Republican Party contained in one complicated man. And at least superficially, he seems to have transmuted himself into exactly what the lost Tea Party Republican is yearning for this election cycle.

In the 1970s, I was a budding Georgia political junkie (and, actually, a Republican activist). I recall Gingrich, whom I first met at a Republican state party convention, as an overtly eccentric and extremely talkative history professor at West Georgia College who lived a sort of strange double life as a politician obsessed with getting elected to Congress. He had been born in Pennsylvania, landed in Georgia during high school, and as a graduate student at Tulane University in 1968 became the Southern regional director for the brief and unsuccessful presidential campaign of the liberal Nelson Rockefeller — not the sort of item a Southern Republican in those days usually wanted on his resume, but a first step on the political ladder nonetheless.

A few years later, having fathered two children with his high school math teacher (whom he had married at the age of 19), Gingrich returned to Georgia and launched his electoral career, running for Congress in 1974 and again in 1976. His incumbent opponent was John Flynt, an old-fashioned conservative Democrat best known for being on the League of Conservation Voters' "Dirty Dozen" list of environmental reactionaries. Unlike many Georgia Republicans who sought to out-flank Dixiecrats by coming across as better-bred right-wing extremists, Gingrich ran to Flynt's left, emphasizing environmentalist and "reform" themes, and enlisting significant support from liberal Democrats. Unfortunately for him, these were the two worst election cycles for Georgia Republicans since the 1950s (the Watergate election of 1974 and Jimmy Carter's Georgia landslide of 1976), and he lost narrowly both times.

But then Flynt retired, just as Gingrich's form of liberal Republicanism was falling out of fashion nationwide, in the run-up to Ronald Reagan's election as president in 1980. When Gingrich ran for Congress again in 1978, this time against a more conventional Democrat, he reinvented himself as a fighting conservative focused on anti-tax and anti-welfare messages. He also burnished his conservative credentials by heading up a statewide group opposed to President Carter's Panama Canal Treaty, a major right-wing (and specifically Reaganite) cause at the time. Gingrich won as a newly minted conservative, riding a conservative trend in his state and the country. It's hard to know whether his earlier liberal persona, which seemed consistent with his private behavior and the polyglot crew of environmentalists he hung out with at West Georgia, or his later conservative incarnation was more genuine. But it is clear his turn to the right was well timed, and launched him not only into Congress but into a career as a national political celebrity.

From the moment he arrived in Congress, Gingrich aligned himself with a rapidly growing group of young supply-side Republicans, and became especially well known for advocating confrontational tactics against Democrats, to the chagrin of his old base of moderate-to-liberal supporters back home (many of them were also close to Gingrich's wife, whom he divorced in 1980 while she was recovering from cancer, after a bitter financial dispute). He was also an energetic purveyor of right-wing agitprop: As a staffer in the Georgia governor's office during that period, I recall having to find a nice way to reject his pleadings that the state officially declare a "Lessons of Granada Day" to impress upon schoolchildren and the citizenry at large the importance of that great Reagan military victory. By the mid-to-late 1980s, when Gingrich began his climb into the House Republican leadership, he was considered more a threat to the traditional mores of the congressional GOP than to Democrats. His own ideology, now staunchly conservative but sprinkled with vague futurist themes ("I see myself as representing the conservative wing of the postindustrial society" he once said), was nicely attuned to the "Morning in America" times.

Gingrich, of course, rose to the summit of power in 1994 and then quickly descended into infamy when he lost a humiliating budget battle with Bill Clinton, and subsequently attempted to impeach the president over Monica Lewinsky amid revelations about an extramarital affair of his own. But the lesson of Gingrich's early years is that he has a jeweler's eye for a political opening and a willingness to transform himself as necessary to exploit such opportunities when they arise. This could be one of those times: Because the 2012 Republican field is exceedingly weak in ways that would benefit Gingrich, he could end up in a surprisingly good electoral position if he decides to run.

Take Iowa, where ostensible frontrunner Mitt Romney is likely to put in a minimal effort (given his upset loss to Mike Huckabee in 2008), and popular Fox News contributors Huckabee and Palin may not show up at all because they prefer to keep their day jobs. According to a recent analysis by Iowa Republican insider Craig Robinson, Gingrich actually ranks first in terms of positioning for the Iowa Caucus: He has already spent considerable time there, along with other early caucus and primary states, and cozied up to the state's very powerful Christian Right faction by writing a book alleging an abandonment of God by American liberal elites. Moreover, one of his ideological heresies that annoys conservatives elsewhere — his longtime support for ethanol subsidies — is actually a big plus in Iowa. If he wins or places there, and then survives Nevada and New Hampshire, he could do well in the Southern primaries thanks to his ties to the region.

More generally, he has positioned himself well to take advantage of a number of issues that obsess the modern right. In addition to courting the Christian Right and describing the Obama administration as a "secular socialist machine," he has gone further than any putative presidential candidate in railing against the alleged threat of Islam at home and abroad, even hyping the phantom menace of creeping Sharia law in the United States. And, in a Republican electorate that is hungry for a fiery, uninhibited radical like Palin or Michele Bachmann — but is also attracted to wonky "ideas men" like Paul Ryan or Mitch Daniels — Gingrich can plausibly claim to be both. As the last speaker to shut down the federal government and the leader of the "Republican Revolution," he has serious bomb-thrower credentials; and, ironically, his fall from grace in 1998 saved him from complicity in George W. Bush's big-government conservatism, which Tea Partiers deplore. Yet he is also constantly spitting out sunny, whiz-bang ideas, from a pet scheme to fix Social Security to a plan that would force every American child to take gym class. He's still very much the college professor intent on impressing his students with interesting, if half-baked thoughts, all delivered with the deceptive certainty of a born salesman.

The downside of a Gingrich candidacy is quite clear. He did, after all, become something of a national pariah the last time he got his hands on power in Washington. His marital history alone — which includes two divorces from chronically ill wives, quickly replaced by younger women — could provide fatal ammunition for an oppo researcher who wants to tar him in the eyes of Christian conservatives and ordinary women voters alike. But the Republican Party electorate is clearly desperate, deluded, and filled with ennui right now. Everything we know about the adaptable Gingrich tells us that he will bend over backwards to give Republican audiences what they want, whether or not it comports with what he was saying the day before yesterday. In this strange environment, that might be all that's necessary.