Accessibility links
Movie Reviews - 'Of Gods And Men' - In Algeria, Faith Tested And Faith Proved An extraordinary drama loosely based on the story of French monks killed in Algeria in 1996, Of Gods And Men won the Grand Jury Prize at last year's Cannes Film Festival.(Recommended) 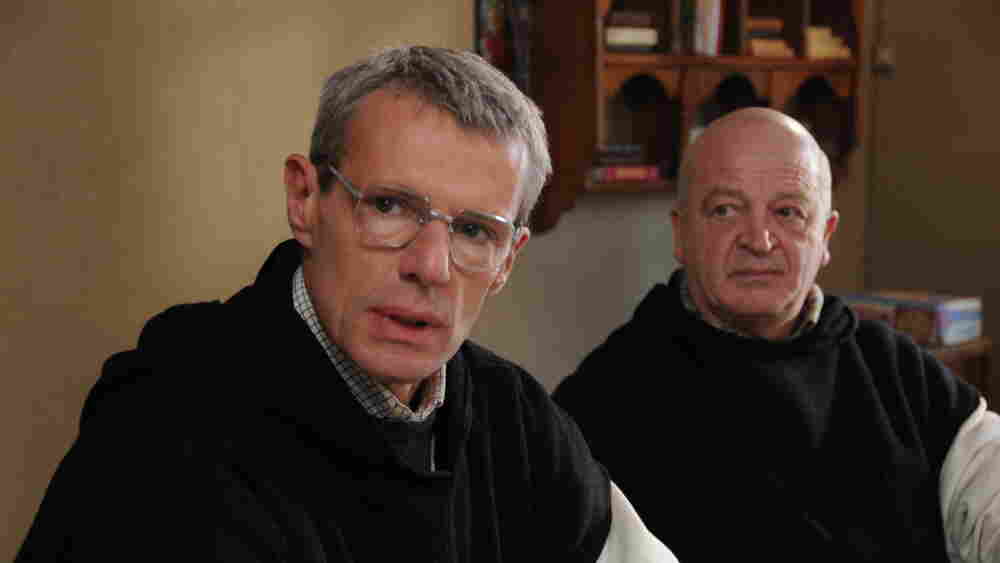 Men Of The Cloth: As Christian and Paul, Lambert Wilson (left) and Jean-Marie Frin play monks who live in the midst of the Algerian civil war. Their lives and relationships are poignantly captured by director Xavier Beauvois. Marie-Julie Maille /Sony Pictures Classics hide caption

Of Gods And Men

The monks in French director Xavier Beauvois' extraordinary Of Gods And Men have simple lives: They sell honey in the market, tend to the ailments of local peasants and mark the days with song and prayer. But simplicity can't prevent complications, especially in a country where some regard foreign faces and ideas as affronts.

It doesn't undermine this austere drama, which won the Grand Jury Prize at Cannes last year, to reveal that the story is loosely based on the case of seven French monks kidnapped and possibly killed by Islamist insurgents in Algeria in 1996. (The circumstances of their deaths are contested.) This is not a suspense film, but a meditation on how to live under the shadow of a violent end.

'We May Be Leaving'

'We May Be Leaving'

'You Have No Choice'

'You Have No Choice'

The Cistercian (or Trappist) monks attempt to reconcile their Christianity with their neighbors' Islam, rejecting martyrdom while fostering acceptance. A Buddhist might even call their outlook "non-attachment."

Algerian government officials order the gray-haired monks to return to France, and some of them welcome the command. But "wildflowers don't move to find the sun's rays," argues Christian (Lambert Wilson), the small cloister's Quran-reading abbot. Slowly, the more skeptical (or apprehensive) of the men come to agree.

The monks know they live in peril from extremists, who recently slit the throats of Croatian construction workers. The group's elderly physician, Luc (Michael Lonsdale), recalls a line from Pascal: "Men never do evil so completely and cheerfully as when they do it from a religious conviction."

With its stately tempo and its respect for the ascetic life, the movie recalls Into Great Silence, the 2005 documentary about a remote French monastery. Yet Beauvois' protagonists aren't really all that insulated from the world. They drive cars, attend local celebrations and, on special occasions, drink red wine and listen to Tchaikovsky on a battered cassette player. At one point, Luc even offers romantic advice to a woman who works at the cloister, sounding like any old man who remembers young love with pleasure. 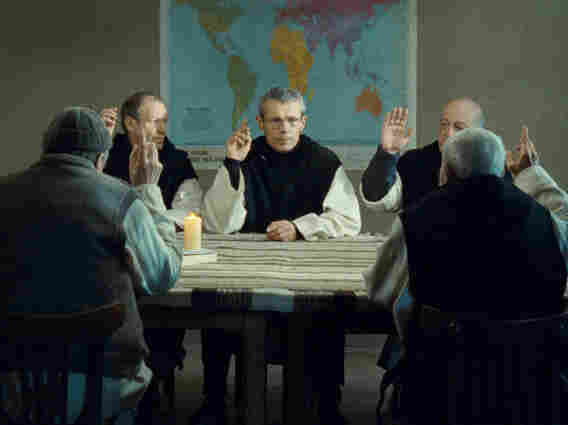 The monks' decision to remain in Algeria leads to their eventual kidnapping and murder, but director Xavier Beauvois wisely focuses on what preceded their faith-based sacrifice. Sony Pictures Classics hide caption 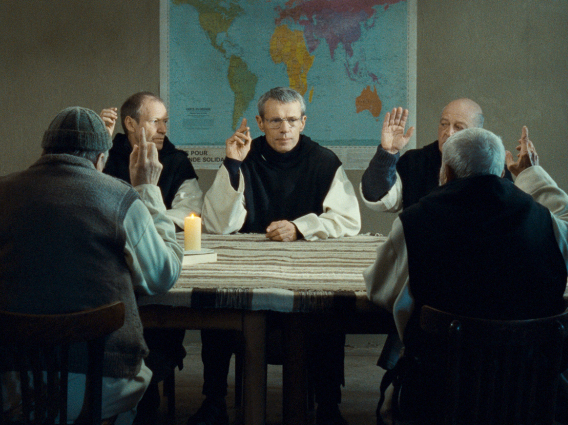 The monks' decision to remain in Algeria leads to their eventual kidnapping and murder, but director Xavier Beauvois wisely focuses on what preceded their faith-based sacrifice.

Shot in widescreen format in Morocco, Of Gods And Men is beautifully composed by veteran cinematographer Caroline Champetier. The movie takes much of its power from its mountainous setting, which represents the closeness of both Earth and heaven. When Christian needs to contemplate the monastery's future, he doesn't go to the chapel but into the hills.

The other key to the film is music. Although the monks have divergent opinions and biographies, their unity is palpable whenever they come together in Gregorian chant. In one of the movie's most stirring moments, the men sing in response to the armed helicopter circling above their home.

It was during their singing lessons, Wilson recalls, that "the actors fused into a team and the community spirit began." That may give the music too much credit, but the ensemble cast's interplay does feel warm and unforced. Wilson himself (who's best known in the U.S. for the two Matrix sequels) seems far more serene than his usual cinematic self.

Although the monks don't seek death, Of Gods And Men can be seen as an ode to religiously motivated self-sacrifice. But Beauvois (who co-scripted the movie) deliberately leaves the story open-ended. The value of these men's lives, he's noting, is not defined by how they ended. (Recommended)