Accessibility links
It's Bottoms Up For Antarctic Ice Sheets Antarctica is like an amazing frozen layer cake, made from millions of layers of snow that gradually turns to ice. But a new study finds that some ice on the continent is actually forming from water flowing beneath the glaciers — a discovery that upends the way researchers thought about Antarctic ice formation. 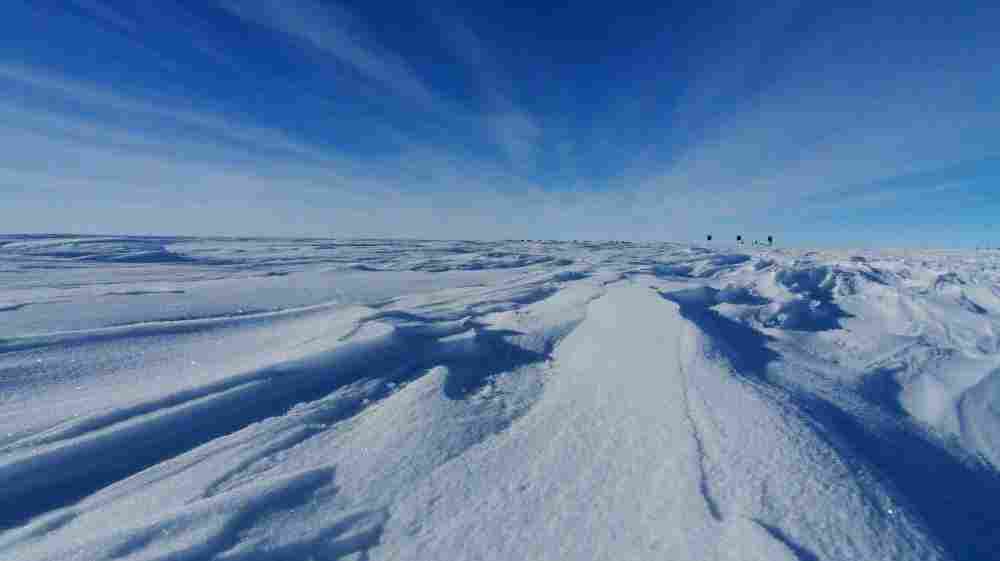 The ice surface of Antarctica, looking toward the Gamburtsev Mountains and Dome A. Deep below the surface here, new ice is forming around the mountains and pushing upward. The black flags in the distance mark the edge of the runway for research aircraft studying the area. Robin E. Bell/Lamont-Doherty Earth Observatory hide caption

You can think of Antarctica as an amazing layer cake, made from millions of layers of snow that gradually turns to ice. But a new study finds that's not always the case. Some of the ice in Antarctica is actually forming from underneath the glaciers, instead of being piled on from the top, according to a report published online by Science magazine.

This surprising discovery stems from a research blitz to Antarctica a few years back. Robin Bell from Columbia University's Lamont-Doherty Earth Observatory was part of the scientific gold rush, called the International Polar Year.

"We went to the middle of East Antarctica because this was the last unexplored mountain range on our planet," Bell says.

This is actually a mountain range of rock, buried under up to 2 miles of solid ice. They flew over this area with airplanes equipped with lasers, radars and other sensors that allowed them to peer through the ice to the rock that lay far below.

"First we were just surprised at how rough the mountains were underneath," she says. 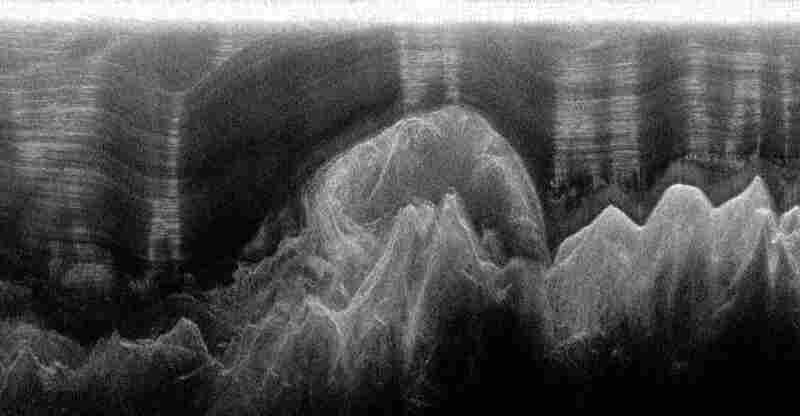 This ice-penetrating radar shows a plume of ice forming far below the ice surface. The sharp peaks at the bottom of the image are mountains, and the bulge in the center is an ice plume 1,100 meters thick. The normally flat ice layers above the mountains have been deflected 400 meters upward. Robin E. Bell/Lamont-Doherty Earth Observatory hide caption 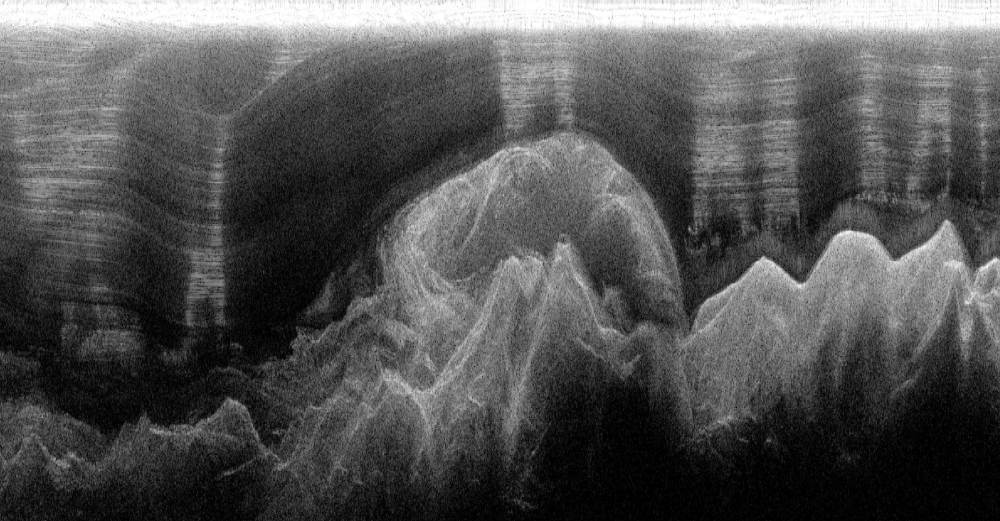 This ice-penetrating radar shows a plume of ice forming far below the ice surface. The sharp peaks at the bottom of the image are mountains, and the bulge in the center is an ice plume 1,100 meters thick. The normally flat ice layers above the mountains have been deflected 400 meters upward.

Lots of the bedrock in Antarctica is flat and boring, but certainly not here, and as Bell took a close look at her radar images of the ice piled high atop the mountains, she noticed some extraordinary, strange features — blobs that she describes as beehives, or maybe jelly doughnuts.

Ice in Antarctica isn't supposed to form that way — it's supposed to fall from the sky as snow, and form from the top down. But here Bell saw unusual ice structures, thousands of feet thick in places.

Heat from the Earth had melted the bottom of the glaciers, and then that water refroze, and it created what you could think of as gigantic frost heaves, so powerful that they actually altered the shape of the surface, half a mile to 2 miles above.

Dome A, an Antarctic ice plateau located above the Gamburtsev Mountains, is one of the most remote places on Earth. Missions flown over the region showed that new ice was actually being formed from water flowing at the base of the ice sheet.

Bell says scientists have known for over a decade that liquid water forms under Antarctica, and that it flows from one place to another, "but now this is showing that the water can actually change the overlying ice sheet."

That discovery changes the way scientists think about the processes that shape Antarctica. It could also complicate plans to study the Earth's past climate. Scientists drill down through the layers of ice to study the air bubbles, from ancient air, that's trapped inside the ice.

"You think of each layer in the ice sheet being a history book and telling us what was going on on the planet at that time," Bell says.

But that record is destroyed when the ice melts and refreezes, so "unfortunately, these books have been erased."

That's not necessarily a disaster.

"We currently have records of greenhouse gases that go back to about 800,000 years," says Kendrick Taylor from the Desert Research Institute in Reno, Nevada.

But scientists want to extend that record back even further, Taylor says. "So we can see how changes in greenhouse gases influenced climate for, say, the last 1.5 million years."

But as fate would have it, that superlong record is most likely to be found in the exact mountain range where Bell has now discovered ice melting and re-forming from below.

Taylor says several research teams, including one from China and another from the U.S., have been interested in drilling there, despite the considerable challenges.

"It's almost like working on another planet out there," he says, referring to temperatures that are often minus 50 degrees Fahrenheit, and air so thin it feels like you're at an elevation of 14,000 feet.

Even so, Chinese scientists are giving it a go. They've staked out a camp along the flank of the mountain, Taylor says. But whether they'll succeed in extracting that 1.5 million-year-old ice is an open question.

"If they drill at the logistically convenient spot, which is their camp, they won't be drilling at the optimal spot for the ice core," Taylor says. They might hit that refrozen ice, where the climate record has been erased.

They're more likely to succeed if they drill at the top of the ridge, but that's a tough place to work.

"So how they're going to address that challenge, we really don't know," Taylor says.