Accessibility links
History with a Twist: Donizetti's 'Roberto Devereux' Donizetti's semi-historical drama brings life to rumors that were already spreading back in the 1500s: that the so-called "Virgin Queen" actually had a secret and passionate love life.

From The Rome Opera 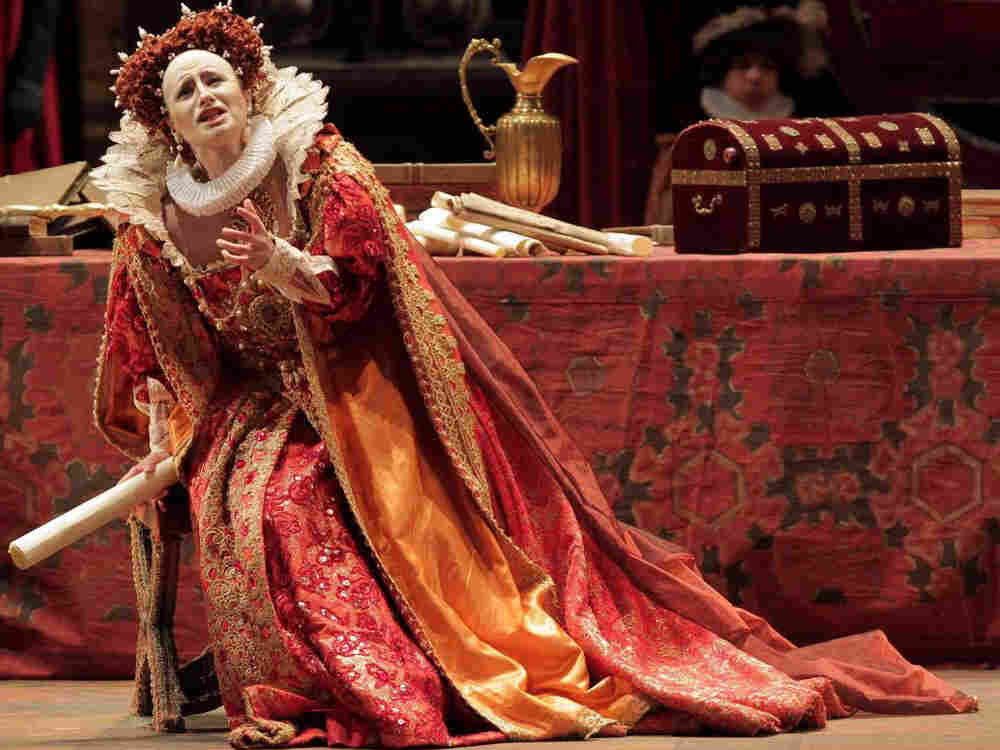 Act Two wraps up with a furious trio for Nottingham (baritone Alberto Gazale), Elizabeth (soprano Carmela Remigio) and Devereux (tenor Massimiliano Pisapia). Nottingham kicks it off by declaring that a great evil is hand — "Scellerato! malvagio!" — while Devereux realizes he's lost everything and the enraged queen signs his death warrant.

The opera's main conflict is voiced in an Act One duet, after Elisabeth boldly asks Devereux if he still loves her and he admits that he doesn't — a revelation she calls "Un lampo orribile" — "A Horrible Truth."

As the hit film The King's Speech has demonstrated, with its multiple Academy Awards, history can be a rich source of dramatic and inspiring stories. What's less clear is whether the film should be seen as genuine history — or as just a story.

Any number of critics, including some who readily acknowledge the movie's effectiveness, have pointed to aspects of the film that aren't, strictly speaking, historical. They mention key elements, such as the true extent of the king's stutter, along with less vital issues, including the extent of Winston Churchill's waistline.

The King's Speech, of course, is hardly the first Oscar-winning movie to be taken to task for historical shenanigans; Patton and Chariots of Fire also come to mind. Still, when it comes to entertainment that re-writes history, especially England's history, few movie makers can top the bar set by the world's great opera composers — and Gaetano Donizetti was one of the prime offenders.

Donizetti was particularly fascinated by Elizabethan history. He wrote three operas featuring Queen Elizabeth I in a starring role, and in all three he gave dramatic life to rumors that were already spreading back in the 1500s: that the so-called "Virgin Queen" actually had a secret and passionate love life.

In Donizetti's first two Elizabethan operas — Elizabeth at Kenilworth Castle and Maria Stuarda — the queen is romantically linked with Robert Dudley, the Earl of Leicester. That's the same supposed relationship portrayed by Cate Blanchett and Joseph Fiennes in the 1998 Oscar-nominee Elizabeth.

In Roberto Devereux, Donizetti's final opera about Elizabeth, she's involved with the Earl of Essex. And to liven up that drama, Donizetti takes further historical liberties that might have today's critical nitpickers reaching for the smelling salts.

In the opera, Essex is eventually beheaded, and that much is historically accurate. But Donizetti's Elizabeth signs the death warrant not because Essex led a treasonous rebellion, but because he had the temerity to fall for another woman. That is, she does it in a jealous fury. Then she turns more than a little nutty and abdicates, renouncing her throne as the opera ends. Talk about playing "fast and loose" with history.

Still, there are those rumors, including one from a supposed eyewitness, who said about the aging queen: "Her delight is to sit in the dark, and sometimes with shedding tears to bewail Essex."

On World of Opera, host Lisa Simeone presents Roberto Devereux in a production from the Rome Opera. The stars are soprano Carmela Remigio as Elizabeth, tenor Massimiliano Pisapia as Devereux, the Earl of Essex, and mezzo-soprano Sonia Ganassi as Sara, the woman whose love for Devereux brings down a queen.

The Story of 'Roberto Devereux' 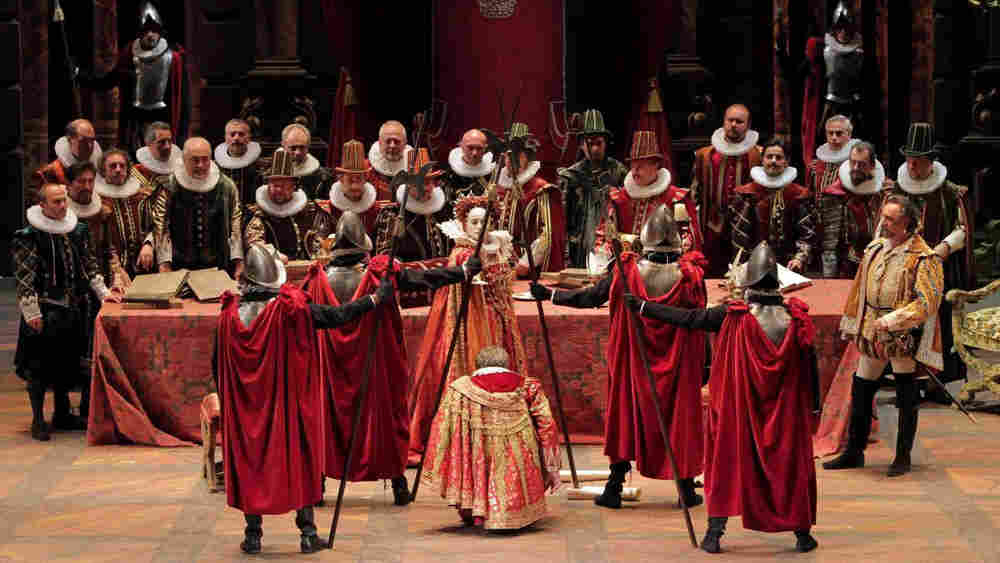 Queen Elizabeth (Carmela Remigio) has a soft spot for Roberto Devereaux (Massimiliano Pisapia) . But when he falls for someone else, the consequences prove deadly for him. Teatro dell'Opera Roma hide caption

The opera opens with an overture featuring the tune of "God Save the Queen." As the action begins, Roberto Devereux has just returned to England from a military debacle in Ireland, and he's accused of treason — which also happened in real life. In the opera, his predicament is further complicated by the queen, who's in love with him.

But now, Elizabeth is worried that Devereux is falling for someone else. And she's right. His new love is a woman named Sara. But while Devereux was in Ireland, Sara was forced into a marriage of convenience, with the Duke of Nottingham, Devereux's best friend.

In a private meeting with the Queen, Devereux is surprised to find that she still feels tenderly for him. Thinking he can confide in her, he begins to admit that he's now in love with someone else — and then, as he sees her anger building, he tries to take it back. The queen warns him that betraying her could have dangerous consequences.

With the Elizabeth viewing him suspiciously, Devereux now faces his trial for treason with only one ally — the Duke of Nottingham. But he still can't resist a secret, late night meeting with Sara. When they're alone together, they both acknowledge that they can never meet again.

As they say goodbye, the two exchange gifts as tokens of their affection. Sara gives Devereux a blue scarf, embroidered with a message of love. And to prove his devotion to Sara, and not Elizabeth, Devereux produces a ring that he received from the queen, who also told him to send it back to her if he ever found himself in danger.

In ACT TWO Parliament is debating Devereux's case. Rumors have it that he'll be found guilty — and the rumors prove correct. Lord Cecil goes to Queen Elizabeth with the ruling: Devereux has been convicted and sentenced to die. All that's left is for Elizabeth to finalize things by signing the death warrant.

The Queen has been in love with Devereux, so she might be expected to hesitate. But her spies now bring her evidence that Devereux has been involved with another woman. When Devereux was arrested, he had a blue scarf, embroidered with a message of love. Elizabeth doesn't know who gave him the scarf, but the message proves her suspicions.

Nottingham then arrives to plead for Devereux's life. He's appalled when it seems that the Queen is about to condemn Devereux not for his crimes, but out of jealousy. But when Devereux is brought in, Elizabeth confronts him with her evidence — the blue scarf — and demands to know who gave it to him. Looking on, Nottingham recognizes the scarf as belonging to his own wife, Sara. Humiliated, he doesn't admit what he knows. During a dramatic trio, Elizabeth signs the death order.

As ACT THREE opens, Devereux thinks he might have one last chance to save his life. Sara still has the ring the queen had given Devereux as a token of her love, with the instruction to return it should he find himself in trouble. So he sends Sara a desperate letter, asking her to take the ring to Elizabeth, hoping that will prompt the queen to pardon him. 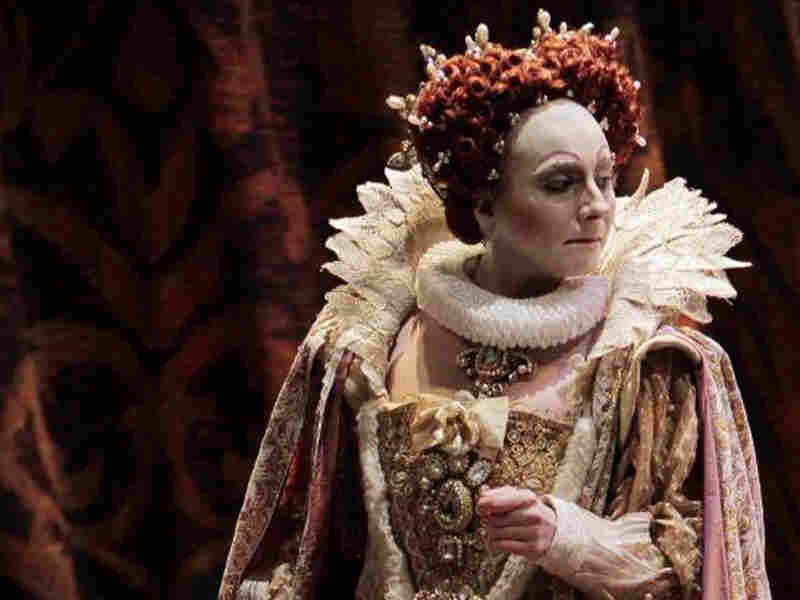 Sara receives the message, but before she can leave, Nottingham confronts her. He also discovers Devereux's letter — more evidence of her infidelity — and orders her not to see the queen.

As Devereux is led to his execution, he reflects on his past with regret, seeing a lifetime of lies and indiscretion. Yet he still hopes that Elizabeth will receive the ring and spare him. Elizabeth is having similar thoughts. She remembers the ring and hopes that Devereux will send it to her as a sign of his renewed devotion.

Before long, the ring does arrive. Sara has managed to reach the queen after all, with Nottingham close behind. Sara presents the ring to Elizabeth, but it's too late. A cannon shot is heard, announcing Devereux's execution. Nottingham declares that he's the one who prevented Sara from reaching the Queen in time, and Elizabeth has them both arrested. blaming them for Devereux's death.

But it's all too much for Elizabeth. She breaks down, seeing visions of a headless Devereux. Realizing that she's no longer a worthy queen, she gives up her throne as the opera ends.