Accessibility links
Alice Cooper: The Gentle Man Behind The Shock Rocker Shock rocker Alice Cooper is a member of the incoming class of the Rock and Roll Hall of Fame. In 2007, he spoke to Terry Gross about the creation of the Alice Cooper persona, his early stage shows and his vaudevillian humor. 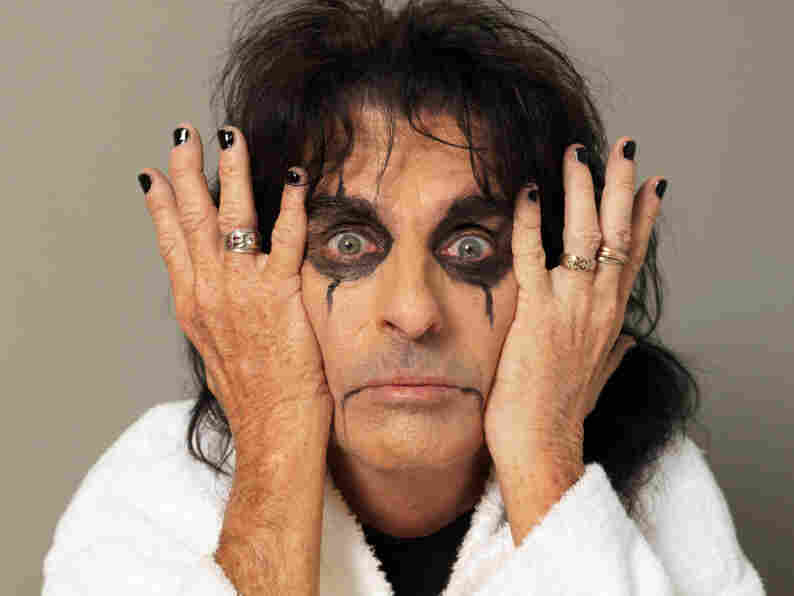 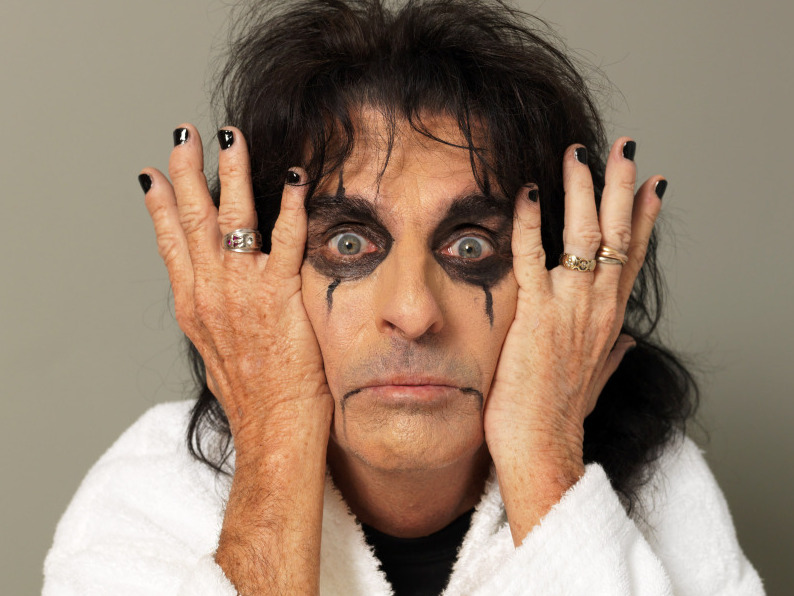 This interview was originally broadcast on May 17, 2007.

During his early-'70s heyday, shock-rock icon Alice Cooper dressed like a ghoul, with a gaunt face and mascara-streaked eyes, performing cartoonishly violent onstage stunts. His brand of rock was about breaking taboos and being decadent. He frequently, for example, took a hatchet to female mannequins and spit into the audience, often ending his performances inside a guillotine.

As intentionally crude as his shows were, some of the songs — including "I'm Eighteen," "School's Out" and "No More Mr. Nice Guy" — became big hits. And on March 14, Cooper and his band will be inducted into the Rock and Roll Hall of Fame, alongside Neil Diamond, Tom Waits, Dr. John and Darlene Love, in a ceremony that will include presentations by Neil Young, Paul Simon, Bette Midler, Rob Zombie and John Legend.

In 2007, Cooper spoke to Terry Gross about his memoir, Alice Cooper: Golf Monster, which featured him on the cover wearing mascara and lipstick, holding a golf club dripping in blood. The book is about golf — which Cooper calls "an addiction" — as well as his transformation from a kid named Vincent Furnier growing up in Michigan to glam-shock-rocker Alice Cooper, the lead singer of the Alice Cooper band.

Cooper's concerts — which feature special effects, animals, baby dolls, gallows and the occasional guillotine — were meant to be theatrical, he explained, because nothing like that existed when he started performing.

"I would look at bands that I really admired like The Who and The Yardbirds and The Rolling Stones, and their theatrics were built into the character," he said. "Like Pete Townshend was very theatrical. Mick Jagger was very theatrical. But I looked at the whole stage and I said, 'Why aren't they painting that canvas?' You've got this entire stage up there, and nobody's doing anything with it."

But Cooper says thinking about the theatrical parts of his performance only comprised a small portion of the band's rehearsal time.

"If we had a 10-hour rehearsal schedule, nine hours of that was rehearsing music, because we realized we had to make the cake before we could put the icing on it," he said. "And then we would spend the other hour on, 'How are we going to make this thing look good?' "

Ironically, one the most shocking incidents at an Alice Cooper concert was completely unrehearsed.

In 1969, Cooper was performing at the Toronto Rock and Roll Revival with his band when a chicken walked onto the stage. Thinking that the chicken could fly, Cooper flung it back into the audience. Instead, the chicken fell between seats, where it was torn to pieces by the crowd. Dubbed the "Chicken Incident" by the press, the event soon became a tabloid sensation, which Cooper then realized he could use for his own benefit.

"The next day in the paper, [it read] 'Alice Cooper rips chicken apart and drinks the blood,' and I was the new geek of all time," he said. "Of course, nobody had a picture of it, because it didn't happen. Now, I got a call the next day from Frank Zappa, who was producing me at the time, and he goes, 'Alice, did you kill a chicken onstage last night?' And I went, 'No.' He says, 'Well, don't tell anybody. They love it! Everybody's talking about it!' "

Staying Within The Boundaries

In spite of Cooper's over-the-top persona, he stipulated that his performances stayed within certain boundaries.

"The funny thing was this: There was no bad language, there was no nudity, there was nothing un-Christian," he said. " But that made it even more irritating, I think, to the general public, that they couldn't really ban us because there was nothing to ban. You know, I would bring up the point, 'How can you ban us and then let your kids read Macbeth?' There's much more blood and Satanic stuff going on in Shakespeare than ever in Alice Cooper, and yet that's required reading. So they did have to, like, look at that and say, 'Well, you're right.' I said, 'So it's obviously, you know, against rock 'n' roll. You don't like the idea of rock 'n' roll.' "

Even Cooper's parents — his dad was a pastor — were fans of his music.

"My dad got the sense of humor in it. He said, 'I love the music [but] I can't buy into the lifestyle. I can't buy into the drugs and the free-love thing, because, you know, I don't believe in that.' He says, 'But the music I love, and the show I think is very funny.' So my dad was a very cool guy. He got it."

Alice Cooper is currently working on an album called Welcome 2 My Nightmare, a sequel to his 1975 concept album Welcome to My Nightmare. He recently received The Golden God Award at the Revolvers, the hard-rock and heavy-metal awards.

On His Character Alice Cooper

"When guys like Groucho Marx would come to the show, he always called me, he says, 'You're the last hope for vaudeville.' And he would bring Jack Benny and George Burns and Mae West. And people like that would come to the show, because it was vaudeville to them. They said, 'Ah, remember 1923? The Great Floyd used to do that! Remember? Of course, he would have doves come out of his sleeves when he --' And this was nothing new to these guys. They would, you know, Groucho would come to the show and he'd see it, and he'd go, 'Ah, rawr rawr rawr.' You know, he'd insult everybody there. 'Excuse me, I got to go insult the maitre d'.' You know, that kind of thing. We were best of friends, Groucho and I were. But they saw it as vaudeville, and actually that's what it is. It's rock 'n' roll vaudeville."

"Loved Sinatra. He actually was a friend. And Frank Sinatra totally got Alice Cooper. In fact, all of the Hollywood guys, the old pros, got Alice Cooper. They got it. They understood what it was. They saw the image. They said, 'Oh, I get it. Okay, cool, he's playing this thing to the hilt. Way to go.' And the hit records keep coming. Frank Sinatra did one of my songs. He did 'You and Me' at the Hollywood Bowl one night. I actually got along quite well with Frank Sinatra. He looked at me as an original, and of course, everybody — you can't beat Sinatra. He's the best voice of all time."

On Being The 'Captain Hook' Of Rock 'n' Roll

"I also looked around and I said, 'Rock 'n' roll is full of Peter Pans. Where's Captain Hook?' And I will gladly be Captain Hook. I always thought the villain always got the best lines. The villain was always the one that everybody kind of really wanted to see. And so I created this Alice Cooper character to be all of those villains wrapped up into one, you know, with this certain amount of tongue-in-cheek. I definitely — you can't do horror without having a punchline. I think you need to make the audience laugh. If you scare them, you need to make them laugh at the same time."

On Creating The 'Alice Cooper' Persona

"There was a moment there where I thought, 'Somebody needs to upset the apple cart a little bit.' We were a good rock band, we lived with the Pink Floyd and, you know, we were, you know, playing gigs with The Doors and The Mothers of Invention and all that. Nobody would record us. Finally, Frank Zappa did record us and, you know, put us on Warner Bros. But there was that moment of saying, 'We're frustrated. We better do something that's going to get a lot of attention.' That's when I said, 'Let's create this character that every parent in the world is going to hate.' You know? 'Alice Cooper. It's a guy. It's a band of guys. We're wearing makeup. We're wearing our girlfriends' lingerie, only we've got black leather pants on and codpieces, and we have canes.' We're more Clockwork Orange than Clockwork Orange. We borrowed a little bit of West Side Story. This was 1970, when people were easily shocked. I always said that we were the band that drove the stake through the heart of the love generation, you know? We were the next thing."