Accessibility links
Why Lousy Jobs Numbers Look Good (And Vice Versa) The unemployment rate seems to bear less resemblance to the actual job market than it used to. As people get more discouraged about finding work, the official measurement, which has always been imperfect, becomes less reliable.

The most important number in America might be wrong.

The unemployment rate — released on the first Friday of each month — is watched obsessively. It is both a regular reminder of the pain inflicted on millions of workers by the Great Recession, and the most important indicator of whether a recovery is taking hold.

But the unemployment number may not be a wholly accurate representation about what is happening in the labor market, let alone the overall economy.

The unemployment rate is based on the Labor Department's monthly Current Population Survey, which is a questionnaire sent to about 60,000 households. That translates into about 110,000 individuals, and is a far bigger survey than any conventional public opinion poll.

But it still has a substantial margin of error — higher than the government's survey of employers, which is the source for statistics about jobs gained or lost every month.

"There's always been a difference between the household survey and the payroll survey," says Daniel Mitchell, a senior fellow at the libertarian-leaning Cato Institute.

After staying stubbornly high through much of 2010, the unemployment rate started to drop fast in December. But by a different measure known as EPOP — the employment to population ratio, or the percentage of working-age Americans who have a job — the employment picture has barely changed at all.

The difference between what the household survey suggests about employment growth and what the payroll survey says about the number of jobs actually created is one reason why the unemployment rate can go down substantially even when job growth is anemic.

Encouraging On Both Counts

That didn't happen Friday. For February, the Bureau of Labor Statistics reported a higher-than-expected net gain of 192,000 jobs, bringing the unemployment rate down to 8.9 percent.

How A Snowstorm Can Cloud Jobs Numbers

That's a drop of only one-tenth of a percent from January — but quite a plunge from 9.8 percent as recently as November.

"Going above 150,000 new jobs starts to mark real progress, instead of just treading water," says Harry Holzer, a former chief economist at the Labor Department who is now affiliated with Georgetown University and the Urban Institute.

Still, Holzer cautions against too much optimism based on one month's figures. Holzer says the household and payroll surveys will show the correct trends over a period of a few months, but there may be some lingering statistical uncertainty about any given month's snapshot.

"After you see the jobs number go up above the 200,000 range," he says, "then you want to see whether that will extend beyond a couple of months."

The unemployment rate can have a profound psychological effect. One reason people may get discouraged is that they know jobs are scarce — whether from their own experience or from government data.

A drop below 9 percent may provide just the encouragement some people need to start looking again. Perversely, however, that may cause the unemployment rate to go back up.

To count as "unemployed" under the Current Population Survey, you have to be not only out of work but also looking and available. More than a half-million people had stopped looking in January. Although it sounds bad — that they felt they had no chance at all — that actually helped bring the unemployment rate down.

Such discouragement helps explain why there has been more volatility in the unemployment rate than in the actual job market. About 5 million people have left the labor force over the past three years, whether because of job-search discouragement or any other reason, according to Heidi Shierholz, an economist with the Economic Policy Institute, a liberal research group.

If half of those "missing workers" start looking, that would bump up the unemployment rate by a point and a half.

"People think unemployment is going down, but if it's just because people are giving up, it's a little misleading," says Marisa Di Natale of Moody's Analytics, an economic research firm. "Over the past few months in particular, much of the decline in the unemployment rate is because the labor force has declined so rapidly."

That's why some economists like another measure altogether. The Bureau of Labor Statistics also releases a figure known as employment to population ratio, or EPOP. Simply put, it's the share of working-age Americans who have a job. 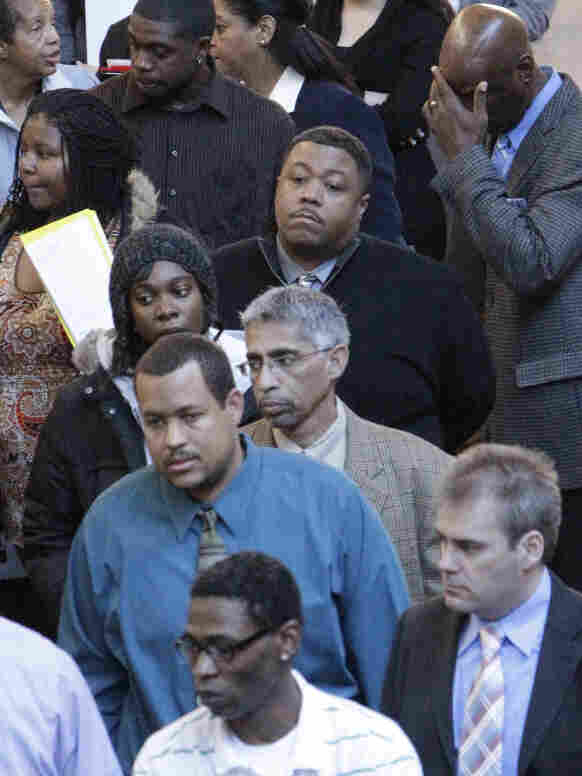 Job seekers line up for a job fair at a hotel in Dallas last month. The unemployment rate can have a psychological effect on people looking for work. If the jobless numbers are high, job seekers may get discouraged. LM Otero/AP hide caption 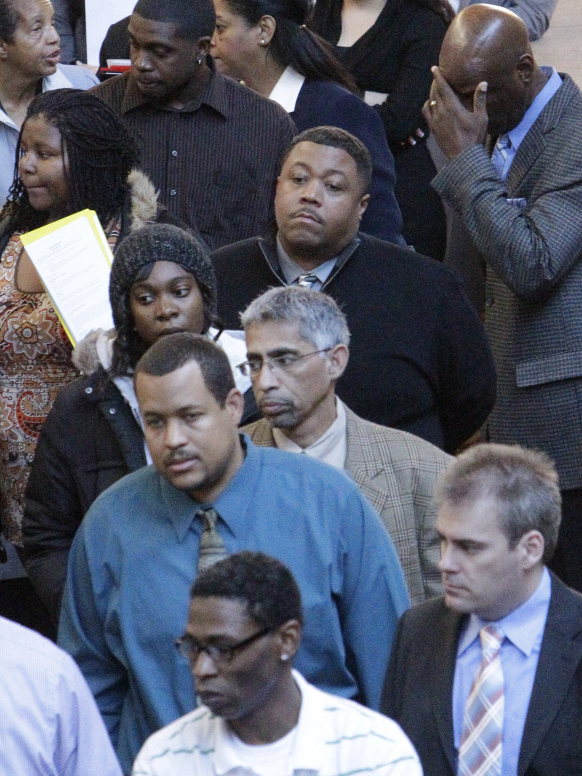 Job seekers line up for a job fair at a hotel in Dallas last month. The unemployment rate can have a psychological effect on people looking for work. If the jobless numbers are high, job seekers may get discouraged.

"It gets very little pickup, which I don't understand, because it's a much broader measure of changes in the labor market," Shierholz says.

"If you look at what's happened to EPOP over the past year, it has not shown the substantial improvement that the unemployment rate has," she says.

But not all economists are crazy about EPOP. It doesn't indicate whether people have taken themselves out of the job market voluntarily. And it misses broader demographic trends, such as a spike in new parents who have decided to stay home with the kids, or aging baby boomers who have retired early.

Because people may be out of the workforce for any number of reasons, EPOP doesn't paint a broad enough picture about what is going on in the current economy, says James Sherk, senior policy analyst in labor economics at the conservative Heritage Foundation.

"If you're looking at people who are trying to find a job, the unemployment rate is actually pretty good," Sherk says.

There are many other employment data that can offer up a more detailed picture about what is happening in the job market. The "underemployment " figure, which runs substantially higher than the unemployment rate because it accounts for people who want to work full time but can only find part-time jobs, has become a more prominent measurement in recent years.

Not many people, however, are labor economists with the time and inclination to pore over a lot of numbers. Most people simply want to know whether unemployment is high or getting higher.

Contrary to expectations, the unemployment rate doesn't capture that precisely. There are too many different trends for one "perfect number" to capture the strength or weakness of something as complex as the U.S. labor market, Shierholz says.

What is needed to be certain that unemployment is really coming down in real-world terms, in other words, is not some new or more accurate measure. It's the creation of a lot more jobs for many more months to come.