Accessibility links
The Root: The Misjudged Black Vote On Gay Marriage When Proposition 8 in California failed to uphold marriage rights for same sex couples, many blamed the African American community, which they saw as being opposed to gay marriage. But David Kaufman of The Root argues that black voters actually have a nuanced and pragmatic approach to LGBT issues.

The Root: The Misjudged Black Vote On Gay Marriage

The Root: The Misjudged Black Vote On Gay Marriage 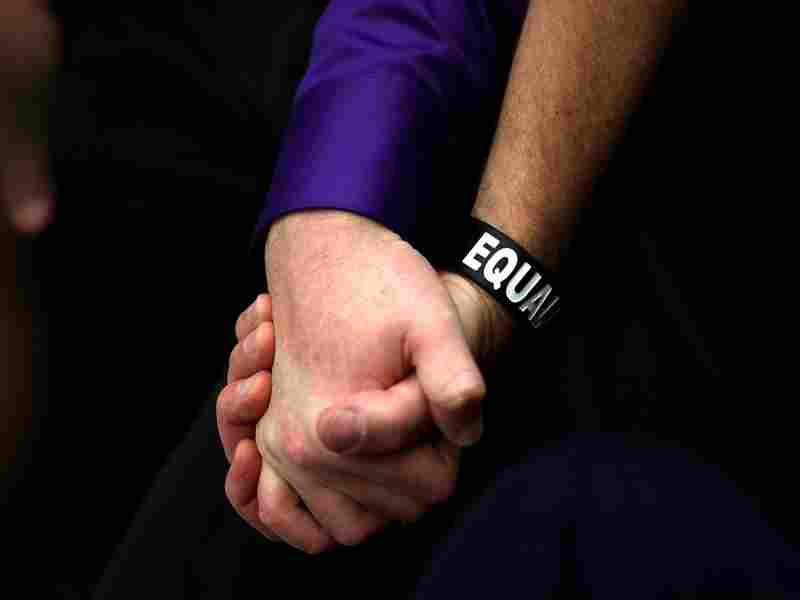 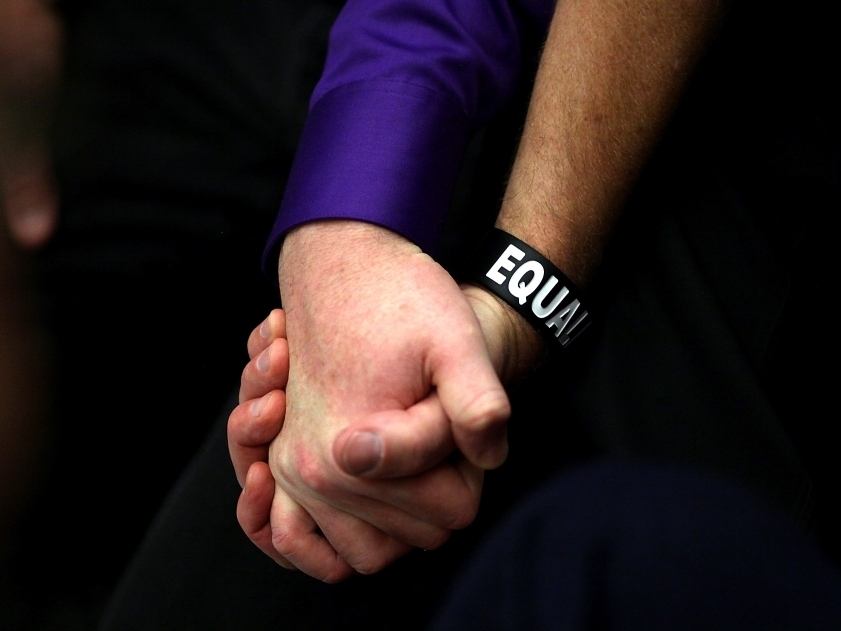 A couple holds hands during a sit-in protest prompted by same-sex couples being denied marriage licenses in San Francisco.

David Kaufman is a New York-based writer who regularly contributes to the Wall Street Journal, Financial Times, Time and Monocle.

Tuesday's Washington Post article examining the response by African-American voters to President Barack Obama's new Defense of Marriage Act policy reveals what many in the black community already know: When it comes to the ballot box, marriage equality is mostly a nonissue. In interviews with black pastors, pollsters, churchgoers and professors, African-American voters explain that economic and social-justice platforms are of far greater concern than LGBT (lesbian, gay, bisexual and transgender) issues.

Of course there are many African Americans — particularly the religious — for whom same-sex marriage will always be anathema. But the message is clear: Even voters who don't support marriage equality still appear willing to elect politicians who do.

"Black voters are well aware that we're dealing with complex issues that are not always a zero-sum game," says J. Cameron Carter, associate professor of theology and black church studies at Duke University. "What this article illustrates is that black voters are as sophisticated as anyone else," he adds, "and it's time the larger LGBT leadership began to recognize it."

While the Post article suggests this sophistication, its writers fail to give it the attention it deserves. Doing so would have offered not only a more nuanced analysis of DOMA's impact on black voters but also an entirely new take on their relationship with the larger LGBT movement itself.

And the Post revisits — yet again — the blaming of black churchgoers for the passage of California's Proposition 8 during the 2008 election cycle. Indeed, even before that November vote, prominent white members of the LGBT community vilified religious African Americans for supposedly voting with a stridently anti-LGBT agenda. Indeed, church attendance has been called the main cause of black voters' support for Proposition 8, which banned same-sex marriage.

But the truth is actually reversed. Focused far more on job creation, health care and education than on gay marriage, black voters aren't supporting conservative candidates simply because they oppose LGBT rights. Instead, they are voting for progressive pro-LGBT candidates — despite disagreeing with their pro-LGBT platforms.

"The truth is, we just don't see blacks voting against a candidate based on [his or her] support of gay marriage," says Patrick Egan, assistant professor of politics and public policy at New York University. "We actually don't see this becoming an important issue for voters of any race."

Nonetheless, African Americans do skew conservative when voting for explicitly anti-LGBT initiatives such as Proposition 8, Egan notes. "But once you take church attendance into account, the numbers are not all that different" for blacks and equally religious White voters. In fact, trade the word "marriage" for "civil unions/domestic partnerships," and blacks are actually slightly more favorable than the general population toward legal recognition of same-sex relationships, according to a 2009 poll by the Third Way, a centrist-progressive think tank in Washington, D.C.

As we shift into the 2012 election cycle, marriage equality is certain to play prominently on both party platforms. On a national level, President Obama's DOMA stance is already under attack by potential Republican candidates such as Sarah Palin and Mike Huckabee. On a state level, the almost certain passage of marriage equality in Maryland this month paves the way for an almost equally certain Proposition 8-styled battle to nullify it on the 2012 ballot.

The Maryland situation is particularly important for African Americans — who make up 31 percent of the state's population, compared with barely seven percent in California. Four years after the "blame the blacks" debacle on the West Coast, can LGBT leaders learn from their mistakes and apply the lessons to the East Coast? Will they avoid the race-baiting that has so poisoned their progressive movement since 2008 and led to charges of racism, elitism and indifference to minority matters?

The answer remains murky. Already, white LGBT activists such as David Mixner are sending not-so-subtle signals that race will matter in Maryland. "Our national organizations must immediately line up the unshakable and unmistakable support of President Obama. Voters love him in this state especially in vote-rich Prince George's County and Baltimore," he writes in a Feb. 28 blog posting. With PGC nearly 63 percent African American, Mixner's message could not be clearer — even if he wimps out on the clarifying.

With his history of race-baiting, patronizing tone and zero respect for African-American voter sophistication, Mixner is a dubious messenger. Yet his message cannot be discounted. Race will inevitably play a central role in any Maryland ballot drive — with blacks the main protagonists.

As in Maine's successful 2009 marriage-equality repeal, national white LGBT leaders will undoubtedly "parachute" into Maryland to help direct the ballot battle. But this time, black voters — and leaders — must take central roles in defining the battle's narrative.

This was the case in the successful 2010 campaign to secure marriage equality in Washington, D.C.; pro-LGBT black voices and faces must now be front and center if a similar campaign comes to Maryland. And white LGBT leaders will have to step aside and let this happen.

"One of the reasons the D.C. campaign was so successful is that black voters — including religious voters — saw folks like themselves supporting marriage equality," explains Lanae Erickson, deputy director of the Culture Initiative at the Third Way. "Just as important: Many [white] LGBT leaders went out of their way to ensure that these [black] activists were heard."

Obama and the LGBT Vote

As for President Obama's re-election campaign, analysts like Erickson and Egan say that LGBT-voter support is inevitable. "Blacks and LGBTs historically vote the most Democratic of any demographic," Egan explains. But when it comes to gays and lesbians, at least, Obama has certainly earned those ballots.

With his new DOMA policy and ending of "Don't ask, don't tell," Obama has fulfilled many of his 2008 campaign promises. Yes, he still does not support full marriage equality, but there is every likelihood that he will do so during his second term. Members of the LGBT community seeking to "punish" the president for this act of realpolitik will only end up punishing themselves.

"Take a look at what's happening with women's reproductive rights, and it's very clear things could get a lot worse — very fast," says Duke University's Carter. "Yes, Obama's LGBT record is not perfect, but it would be delusional to think nothing has happened just because every battle has not yet been won."

Still, as the experiences in both California and Washington, D.C., suggest, the most important change agents for black voters — gay or straight, religious or secular, urban or suburban — are black voters themselves. Stick to the sidelines, as in California in 2008, and risk being demonized by a disappointed white LGBT leadership. But claim the mantle that is rightfully yours, as in Washington, D.C., and lead the struggle for a more equitable nation for every citizen.

"The 2012 election is an opportunity for the black leadership, especially the black LGBT leadership, to stand up and take decisive roles," says Thomas Allen Harris, whose new film, Marriage Equality: Byron Rushing and the Fight for Fairness, explores the links between the African-American and LGBT civil rights movements. "If there's anything we've learned from President Obama, [it's that] politics can truly be a transformative experience."