Accessibility links
Could Cornstarch Have Plugged BP's Oil Well? One physicist says that a substance familiar to young children — oobleck, a mixture of cornstarch and water — might have helped stop the flow of oil from BP's blown-out well. 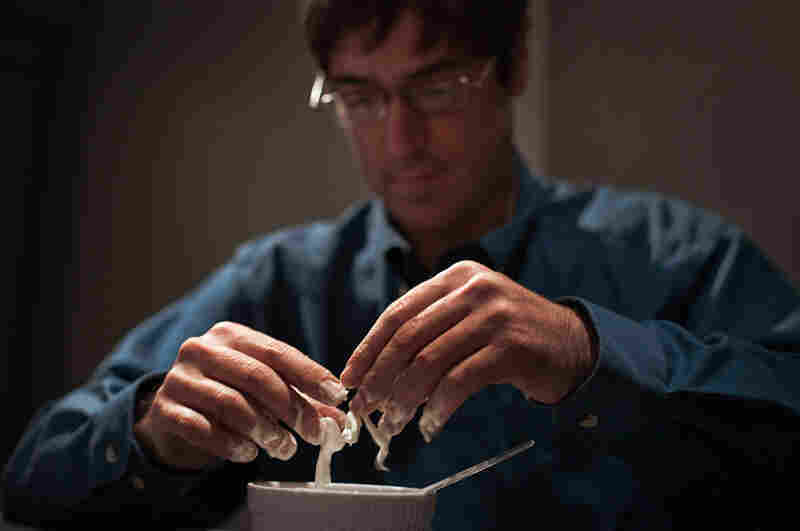 NPR science correspondent Richard Harris plays with oobleck. One researcher says the material, made from a mixture of cornstarch and water, might have helped stop the flow of oil from BP's blown-out well in the Gulf of Mexico. Jonathan Makiri/NPR hide caption

While you were thumbing through your Feb. 4 issue of Physical Review Letters, perhaps you noticed the article titled "Viscoelastic Suppression of Gravity-Driven Counterflow Instability."

OK, maybe not. But it was actually worth a look. It turns out the article describes how engineers might have been able to stop the BP blowout in the Gulf of Mexico last year using a child's plaything: oobleck. It's a weird mixture of cornstarch and water. When it moves slowly, it flows like a liquid. Move it fast, and it freezes into a solid.

The idea of using oobleck came to Jonathan Katz, a physics professor at Washington University in St. Louis, last May. He was on a small group of experts that U.S. Energy Secretary Steven Chu pulled together to advise him about the catastrophe.

So Katz was on hand when BP tried to stop the well by pumping a dense fluid called drilling mud down it — the so-called top-kill approach. It failed.

"We'd predicted that [would fail], so we were disappointed like everybody else was, but not enormously surprised," Katz says. "And so I was scratching my head and saying, 'Is there some solution to this problem?' "

Make Your Own Oobleck

Slowly stir in the cornstarch into the water. Mix slowly — you'll find that the more aggressive the stirring, the harder it is.

Add a few drops of food coloring if you wish.

The problem, as Katz saw it, was that oil and gas blasting up the well tended to break up the drilling mud into fine particles, and a light mist like that ends up getting shot up the pipe and dumped onto the seafloor.

Katz wondered whether there was some kind of fluid that wouldn't immediately be dispersed into tiny particles when it encountered the rapidly flowing oil.

"I realized after a while that cornstarch suspension — oobleck, the kids call it — has this wonderful property that if it's not flowing rapidly, it's a liquid that flows pretty well," Katz says. "But if you try to make it flow rapidly, it suddenly turns stiff and it doesn't flow at all."

Oobleck versus a stream of bubbling hot oil? Really? Yep.

"I made some rough estimates; it looked like it was going to work," Katz says.

And Katz had an inside track here — being on the energy secretary's advisory panel, he participated in daily telephone briefings and frequent e-mail exchanges. He had about as much access as you could hope.

"So I certainly sent it to everybody on the lists. I don't know who read it — you can never tell," he says.

But Katz was dismissed from the panel shortly thereafter because of some controversial social opinions on his website. Even so, Katz says he still dreamed that his solution could solve the problem and end in triumph. Of course it didn't work out that way.

"I don't fault the pros," he says. "They have a toolbox; they use the tools in their toolbox. This isn't the place to do physics experiments, especially one that would cost quite a bit of money."

Cornstarch is cheap, but the rest of the operation would not be.

"And of course the drilling mud industry isn't used to mixing cornstarch into their stuff, so it was completely new for them," he says. "It wasn't something they had available in their tanks ready to go. They would have had to prepare a custom solution and take it out to the well."

And that was not going to happen. Instead, after BP stopped the well through more conventional means, Katz and some associates at the Lawrence Livermore National Laboratory did a small-scale experiment with the cornstarch mixture and mineral oil.

They report in that Physical Review Letters article that it performed as Katz had predicted under these highly idealized circumstances. Whether it would have worked in the real world is an open question. Prof. Steve Wereley, who teaches fluid dynamics at Purdue University, says the concept is clever.

"The problem with using something like cornstarch and water is getting it where it needs to be," Wereley says.

You'd have to pump a lot of it, fast, into the well if it's going to work. And there might be trouble pumping it — remember, oobleck gets stiff when it's put under pressure.

"It would tend to create that same reaction when you're trying to pump it down the hole."

Wereley calculates that you'd have to pump it so slowly that you couldn't get it down the hole faster than the oil was rushing up. And that's a big problem.

A BP spokeswoman told NPR their engineers reviewed the idea and decided it wouldn't work. But Katz still figures it's a good idea worth exploring for the next time an oil well is running completely out of control.