Accessibility links
Pressure Mounts To Ax Teacher Seniority Rules Education reformers have argued for some time that relying on seniority alone to determine layoffs gets rid of young, promising teachers and causes mayhem in low-income schools. Unions, however, say ending "last in, first out" rules will only aggravate the already huge problem of teacher turnover. 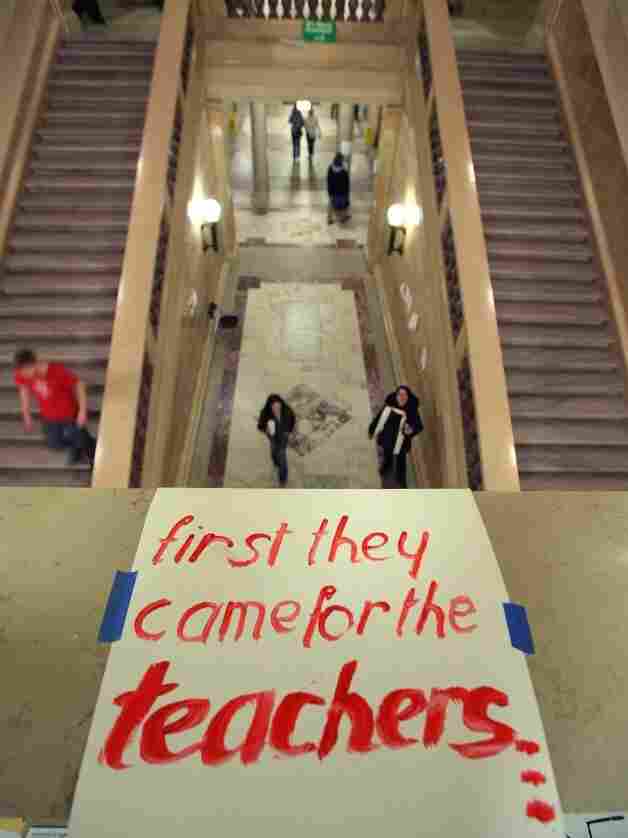 A sign supporting teachers is taped to the railing above a stairway in the Wisconsin state Capitol last month, as activists protested what they call an anti-union measure. Scott Olson/Getty Images hide caption 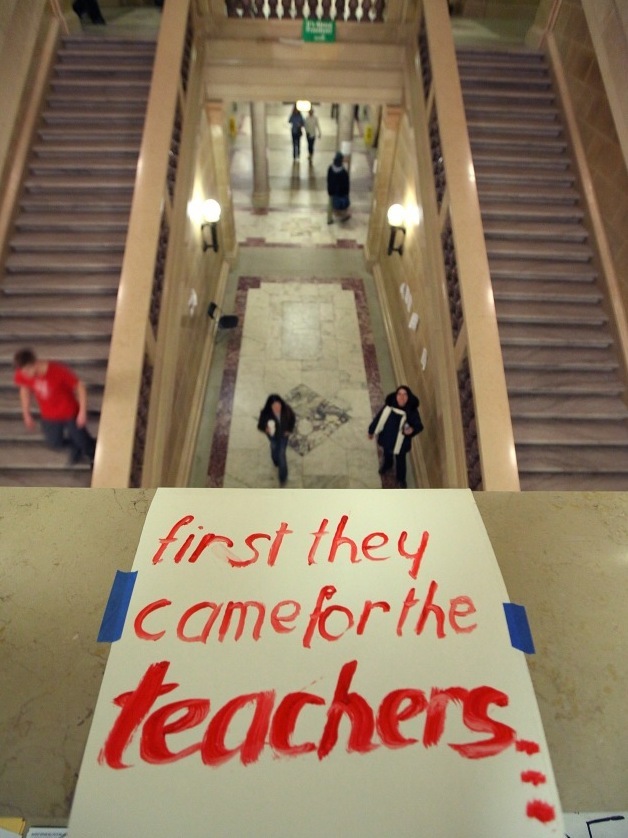 A sign supporting teachers is taped to the railing above a stairway in the Wisconsin state Capitol last month, as activists protested what they call an anti-union measure.

Last week, the New York state Senate passed a bill that would end the use of seniority as the sole factor for deciding which teachers get laid off. The bill faces long odds in the state Assembly. But the vote is a sign of growing frustration with what's known as "last in, first out" — a rule that says the last teachers hired get dismissed first when there is a layoff.

Like local leaders around the country, New York City Mayor Michael Bloomberg says he will soon have to lay off teachers because of shrinking state aid. He says he cannot have his hands tied by a system that judges teachers solely on their years of experience.

"We need a merit-based system for determining layoffs this spring," Bloomberg says. "And anything short of that is just not a solution to the problem we face."

Seniority: An Obstacle To Reform?

Education reformers have argued for some time that relying on seniority alone gives the ax to young, promising teachers. They also say the seniority system causes mayhem in low-income schools, which tend to rely on new teachers. The anti-seniority forces got a boost from Education Secretary Arne Duncan last week.

"If layoffs are based only on seniority, that doesn't help kids," Duncan told reporters. "And it particularly doesn't help the students who need the most help."

Many Democratic education reformers see seniority as an obstacle to reforms that favor more effective teachers. At the same time, Republican governors in Wisconsin and other states are trying to reduce the power of labor in the name of fiscal austerity.

Some unions, backed in a corner, say they are the only ones watching out for students. Michael Mulgrew, president of New York City's United Federation of Teachers, says budget cutters like Bloomberg are being disingenuous.

If layoffs are based only on seniority, that doesn't help kids. And it particularly doesn't help the students who need the most help.

"We are very leery, especially in times like we have right now, that people will try to say, 'Just give us complete discretion,' and then they will stop investing in education," Mulgrew says.

Opponents of seniority rules may have some momentum, but they still face an uphill battle against a practice that is enshrined in law in 14 states.

The Chicago Public Schools system tried to get rid of hundreds of teachers last year without regard to seniority — but a judge put a stop to it. Karen Lewis, president of the Chicago Teachers Union, says seniority is the law — and ending it will just aggravate the already huge problem of teacher turnover.

"Fifty percent of the teachers that enter the Chicago Public Schools leave within the first five years," she said. "We have a problem that we're going to have instability throughout our system, and that's the direction we're going in. This is what seniority kind of puts the brakes on."

'You Don't Vilify Your Union'

Thomas says his district is working on a point-based system that looks at teacher evaluations and other factors. In some places, negotiations over a new evaluation system may take months or years, particularly if districts want to throw students' progress into the mix.

Thomas says districts that are already fighting their unions in court, or in the headlines, may never get those evaluations in place.

"You don't vilify your union — you bring them to the table and you make them partners, because when you talk to your union leadership, they don't want to see bad teachers, either," Thomas says. "But they do want to see ... you treat them fairly, if in fact you're going to go after performance issues."