Accessibility links
Obama: U.S. Considering 'Military Options' In Libya The president said NATO is consulting on a range of possible options and warned that Moammar Gadhafi's regime will be held accountable for violence against the Libyan people. Earlier, Libyan warplanes bombed a key oil port where rebel forces were regrouping after a ferocious government assault.

Libyan fighter jets pounded a rebel-held oil port Monday as President Obama warned that the U.S. was still considering a range of responses to the conflict, including "potential military options."

Obama said NATO was consulting in Brussels and emphasized that he wanted to send a clear message to Moammar Gadhafi's regime. 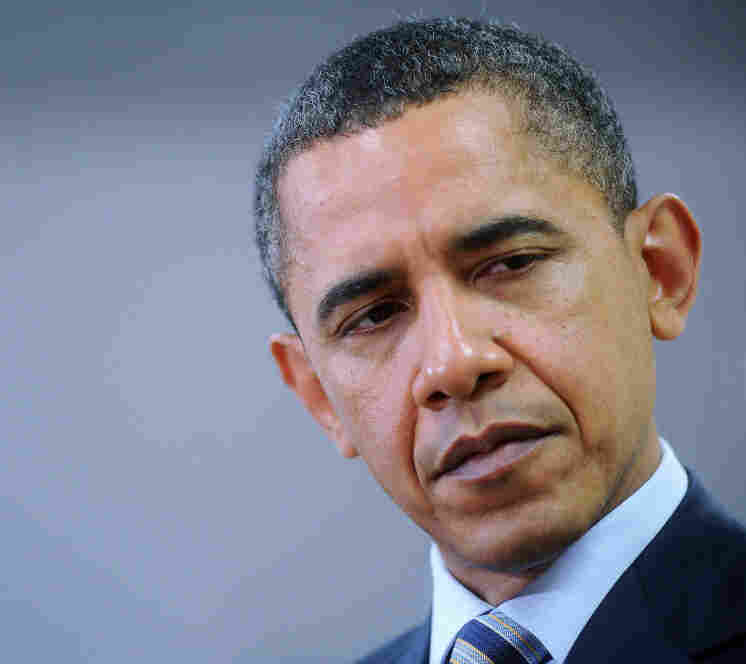 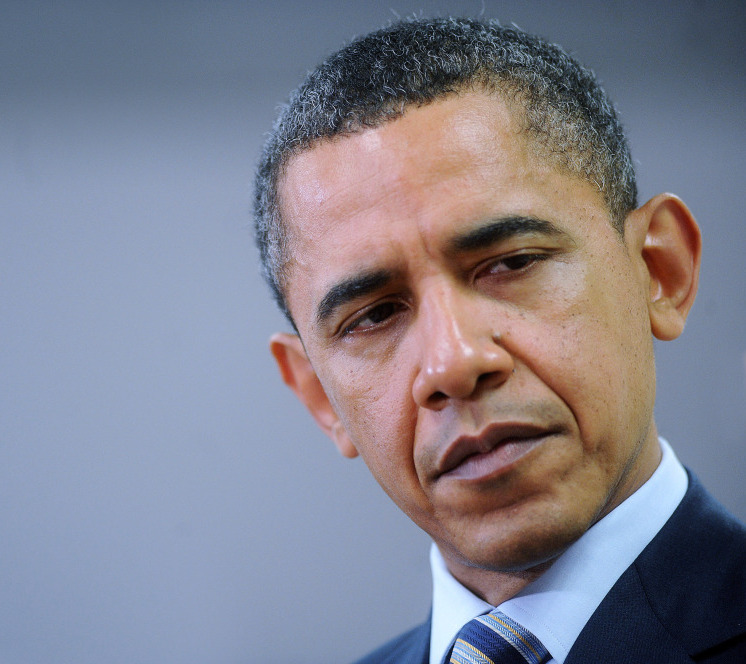 President Obama vowed Monday that Libyan leader Moammar Gadhafi's regime "will be held accountable for whatever violence continues to take place there."

"It is their choice to make how they operate moving forward, and they will be held accountable for whatever violence continues to take place there," the president said at a White House news conference with Australian Prime Minister Julia Gillard. He also authorized an additional $15 million in humanitarian aid to Libya.

As a first step, NATO agreed on Monday to increase AWACs surveillance flights over Libya from 10 to 24 hours a day to give the alliance a better picture of both the humanitarian and military situations on the ground, U.S. Ambassador to NATO Ivo Daalder told reporters. NATO's governing body is meeting over the next two days to come up with contingency plans for military operations to be considered at a Thursday meeting of the alliance's defense ministers in Brussels, Daalder said.

Earlier, Gadhafi warplanes launched multiple airstrikes in the city of Ras Lanuf, where rebel forces tried to regroup from a government assault that has stalled their push west toward Tripoli.

Two of the airstrikes "mostly just hit in the sand," NPR's Peter Kenyon reported from Ras Lanuf, which is marked by large oil-tank farms and rows of worker housing in mostly empty desert. But he said shrapnel from another strike reportedly hit people riding in a pickup truck. It was not clear whether there were casualties.

Opposition fighters took control of the city late last week as they pushed out of the rebel-held eastern half of Libya for the first time. But their westward advance was turned back by a ferocious counterassault Sunday in the village of Bin Jawad, about 30 miles west of Ras Lanuf. Pro-regime forces used helicopter gunships, artillery and rockets to recapture the tiny desert town.

The rebels said they can take on Gadhafi's elite ground forces but are outgunned in the face of air power.

"We don't want a foreign military intervention, but we do want a no-fly zone," rebel fighter Ali Suleiman told The Associated Press. The opposition, he added, can take on "the rockets and the tanks, but not Gadhafi's air force."

Suleiman said his forces were waiting for reinforcements in Ras Lanuf and have orders "to stay here and guard the refinery, because oil is what makes the world go 'round."

Mohamad Samir, an army colonel fighting with the rebels, also told the AP that his forces were expecting reinforcements from the east.

Rebels told NPR that locals joined pro-Gadhafi forces to ambush them in Bin Jawad. Regime troops reportedly commandeered several houses, set up sniper positions and fired on rebel forces that entered the village thinking it was still under their control.

"We have had multiple reports — which we cannot confirm — of civilians, especially women, being pushed to the window frames when fighting was going on, which would be an allegation of the Gadhafi forces using them as human shields if that was confirmed," Kenyon said.

AP reporters witnessed air attacks by helicopters on the rebel forces and heavy fighting on the ground. A warplane also attacked a small military base at Ras Lanuf and destroyed three hangars and a small building. Regime forces shelled rebel positions in the port city with rockets and artillery. Ambulances sped toward the town and rebels moved trucks carrying multi-rocket launchers toward the front lines.

Eight people died and 59 were wounded in the fighting around Bin Jawad, Ibrahim Said, deputy director of Ajdabiya hospital, told the AP.

The rebels regrouped in Ras Lanuf, where MiG fighters circled over rebel positions Monday before launching airstrikes behind their front lines in the morning and afternoon.

Ras Lanuf is now the front line in the battle for Libya. But Kenyon said it represents "a defensive front line as opposed to a staging area for the next push west by the rebels, which is what we've been seeing previously."

Anti-government fighters hope to push toward Sirte, Gadhafi's hometown, and then on through to Tripoli. Many of the rebels in Ras Lanuf told NPR Monday that "Inshalla [God willing], I will be sleeping tonight in Sirte," but that seemed unlikely given the latest fighting.

A resident told the AP that tanks and artillery opened fire on rebels around 9 a.m. local time and that attack hadn't stopped when he left the city at 1:30 p.m. All entrances to Zawiya were under government control and the rebels had been driven out of the city's central Martyr's Square and a nearby mosque by the heaviest attack in several days.

"The tanks are everywhere," the man said. "The hospital is running out of supplies. There are injured everywhere who can't find a place to go."

But Martin Fletcher, associate editor of The Times of London, found a way through Sunday in a taxi from Tripoli. He said he came across a scene of destruction — burning vehicles and buildings, trees uprooted and people recovering from serious injuries in a hospital.

"People [are] on respirators with severe head wounds; bullets to the abdomen; shrapnel all up their sides," he told NPR.

If the rebels continue to advance, even slowly, Gadhafi's heavy dependence on air power could prompt the West to try to hurriedly enforce a no-fly zone over the country. The United Nations has already imposed sanctions against Libya, and the U.S. has moved military forces closer to its shores to back up its demand that Gadhafi step down.

One young fighter in Ras Lanuf told NPR that even though the rebels have been adamant about no foreign military intervention on the ground in Libya, they're beginning to wonder why the international community doesn't step in as they get hammered by superior forces.

Libyan diplomat Ali Aujali, told NPR that the opposition movement needs two things from foreign powers: a no-fly zone and recognition of a national council established as an alternative government.

But Susan Rice, the U.S. representative at the U.N. told NPR's Melissa that "it's too soon to know" if a resolution to impose a no-fly zone could pass in the U.N.

The uprising in Libya, which began Feb. 15, is already longer and much bloodier than the relatively quick revolts that overthrew the longtime authoritarian leaders of neighboring Egypt and Tunisia. Hundreds if not thousands of people have died during the unrest, although tight restrictions on media make it near impossible to get an accurate tally. 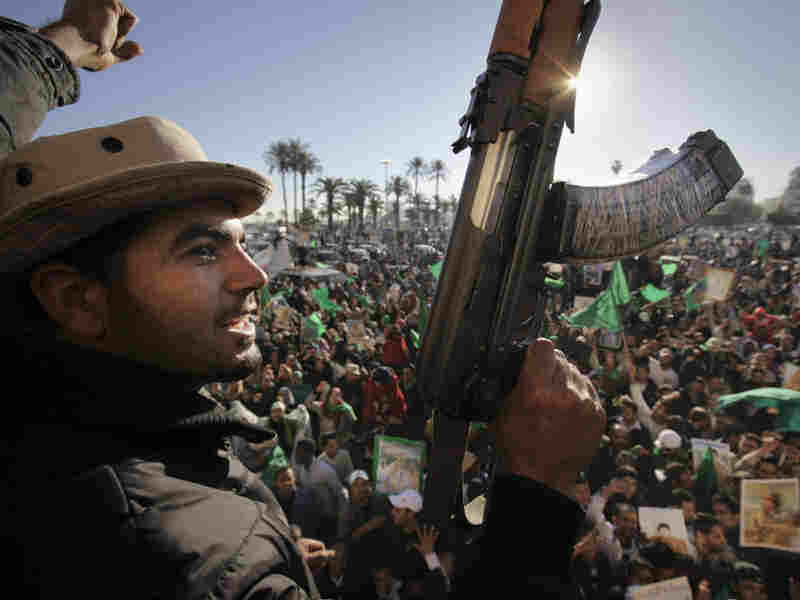 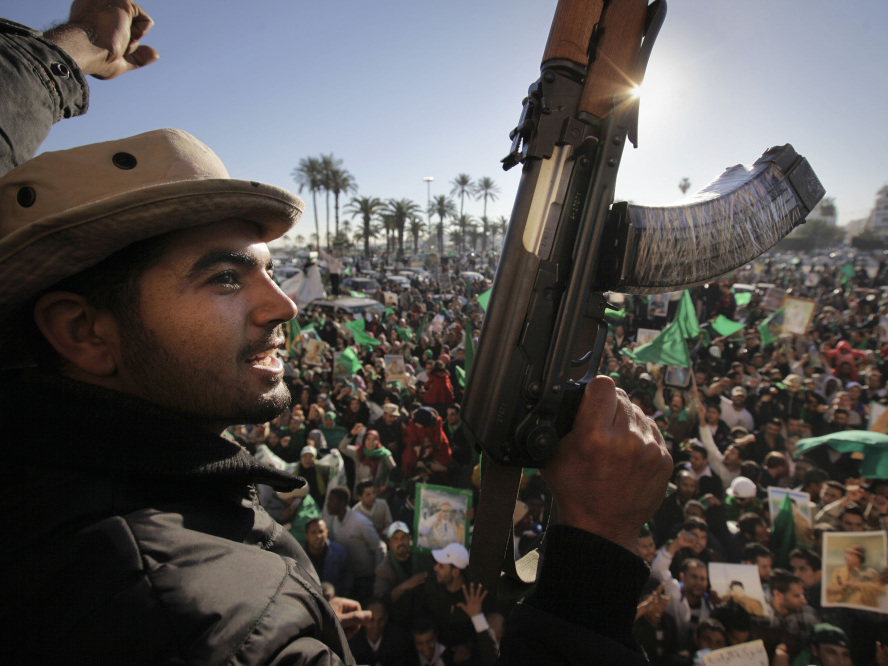 The U.N. is sending former Jordanian Foreign Minister Abdelilah Al-Khatib as a special envoy to Libya for urgent consultations aimed at ending the bloodshed. A fact-finding mission also is being dispatched to Tripoli to investigate the violence and its effects on the civilian population.

A team from the European Union arrived in Libya over the weekend to report on the humanitarian situation by Friday, when EU leaders are expected to meet and draw up a plan for assistance.

Valerie Amos, U.N. undersecretary-general for humanitarian affairs and emergency relief coordinator, said the Benghazi Red Crescent reported that the western city of Misurata was under attack by government forces.

More than 200,000 people have fled the country, most of them foreign workers. The exodus is creating a humanitarian crisis across the border with Tunisia — another North African country in turmoil after an uprising in January that ousted its longtime leader.

Many of those who have fled Libya's conflict are migrant workers from Bangladesh. Three died Sunday after jumping off a boat carrying more than 1,000 Bangladeshi workers from Tripoli to the Greek Island of Crete, NPR'S David Greene reported from the Tunisian border town of Zarzis.

Greek authorities said several dozen passengers climbed into the water during the night after the boat docked in Crete. Fourteen people were missing.

"It's not clear why the refugees escaped the boat, but there's speculation they hoped to avoid being sent home and preferred to stay in the European Union to look for work," Greene said. "Bangladeshis fleeing Libya have poured over the border into eastern Tunisia. Many share the same story: When the unrest began, their bosses told them to get out."

Britain was forced Monday to explain a botched mission to Libya in which eight people were briefly detained by anti-Gadhafi forces.

The U.K. team — believed to be a half-dozen commandos and at least one British official — arrived by helicopter near Benghazi in the middle of the night several days ago, according to witness reports. Their secret mission was to make contact with opposition leaders, but apparently they weren't expected.

The Brits were detained after Libyan security guards discovered they were carrying weapons and some fake passports and mistook them for foreign mercenaries.

British Foreign Secretary William Hague, who authorized the operation to make contact with the Libyan rebels, told members of Parliament on Monday that the team ran into "difficulties" that have since been resolved.

The team was released Sunday and boarded a British frigate heading for Malta.

With reporting from NPR's Peter Kenyon in Ras Lanuf, Libya; David Greene in Zarzis, Tunisia; Philip Reeves in London; and Teri Schultz in Brussels, Belgium. Material from The Associated Press was used in this story.