Accessibility links
Court Rules For Death Row Inmate In DNA Case The Supreme Court ruled Monday that Texas must delay the execution of a man convicted of murder while the inmate seeks evidence for DNA testing. Henry "Hank" Skinner was sentenced to death 16 years ago in the killings of his girlfriend and her two sons. He was 45 minutes away from execution last year when the court agreed to hear his case. 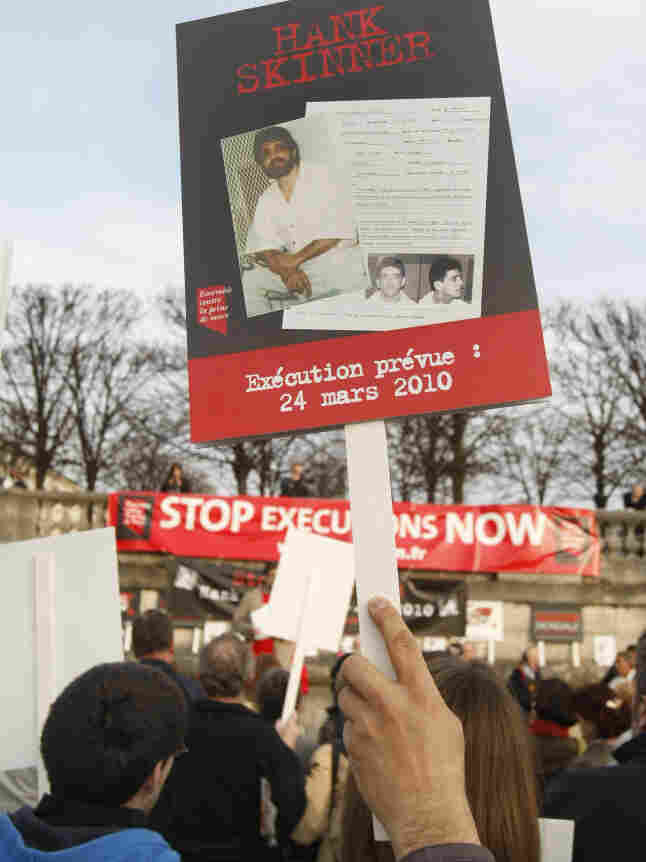 Last year, protests were held in France to show support for death row inmate Hank Skinner, who had been scheduled to be put to death that March. Skinner was 45 minutes away from execution when the Supreme Court granted a stay to hear his case. Remy De La Mauviniere/AP hide caption

The U.S. Supreme Court has pried open the courthouse door a crack for prisoners who after their convictions seek access to evidence for DNA testing. By a 6-3 vote, the court ruled that prisoners have a right to use federal civil rights law to get such material.

Texas leads the nation in the number of prisoners freed by DNA testing, with 41 DNA exonerations, but its state law imposes limits on such post-conviction testing. The Supreme Court's ruling on Monday allowed prisoners to challenge those limits in federal court.

Henry "Hank" Skinner was 45 minutes away from execution last March when the Supreme Court granted a stay to hear his case.

He was sentenced to die for the brutal killing of Twila Busby, his live-in girlfriend, and her two adult, developmentally disabled children. Busby was bludgeoned to death with an ax handle, and her sons were stabbed to death.

Skinner does not deny that he was present at the scene of the murders. But he says that he was so drunk from a potent combination of alcohol and codeine that he could not have committed a crime that required such strength and dexterity.

He has maintained that he slept through the crime and awoke to find the grisly scene. He fled to a nearby house, where police found him — his arms, shirt and pants covered in blood.

Skinner pointed to his girlfriend's uncle, an ex-convict with a history of violent sexual abuse, as the probable killer. The jury didn't buy it.

Police tested some but not all of the evidence at the crime scene. The items left untested included fingernail clippings from the victims, the ax handle, a bloody jacket next to Busby's body, vaginal swabs from Busby, and hairs found on the victims.

At the trial 16 years ago, Skinner's lawyer did not ask that this evidence be tested, apparently fearing that DNA evidence would only incriminate his client further. But since then, Skinner and a new team of lawyers have tried to get access to the material for DNA testing.

Monday's ruling by the Supreme Court has given Skinner new hope.

Forty-eight states, including Texas, have laws allowing for post-conviction DNA testing, but Texas and some others put limits on that access. The Texas courts have interpreted the state law to bar access for any defendant who, like Skinner, did not ask for DNA testing at trial.

The U.S. Supreme Court has previously declined to take steps to force such testing. But on Monday, it ruled that defendants like Skinner have the right to go to federal courts and seek access to DNA testing under a federal civil rights law.

Writing for the six-justice court majority, Justice Ruth Bader Ginsburg said that even if Skinner were to win in federal court, that "would not necessarily imply the invalidity of his conviction." A victory would simply allow Skinner access to evidence for DNA testing — the results of which "might prove exculpatory," "might prove inconclusive" or "might further incriminate Skinner."

Defense attorneys saw the ruling as an important victory. "There have been for many years a couple of procedural dragons that stood in the way of prisoners trying to use the federal civil rights act to get DNA testing that could exonerate them," says Nina Morrison, a senior staff lawyer at the Innocence Project. Monday's ruling "slayed those dragons," she says.

In order to prevail now, says Morrison, Skinner will have to show that by barring DNA testing for any defendant who failed to ask for it at trial, the state is unreasonably erecting barriers to evidence that could prove innocence.

Outside Texas, such barriers have been tumbling down of late. Just last week, the Pennsylvania Supreme Court invalidated a provision in that state's law that barred post-conviction testing in cases where the defendant had confessed.

Nonetheless, many prosecutors were dismayed by Monday's Supreme Court ruling. Scott Burns, executive director of the National District Attorneys Association, says that "in the real world, people in prison have a lot of time on their hands" and "they now have an entire new avenue" to bring legal challenges.

The dissenters from Monday's ruling echoed that fear. Justice Clarence Thomas, joined by Justices Anthony Kennedy and Samuel Alito, accused the court majority of "provid[ing] a road map" for every state prisoner "to relitigate his claim." Added Thomas: "What prisoner would not avail himself of this additional bite at the apple?"

Replying for the majority, Ginsburg called such fears "unwarranted." She pointed to statistics suggesting that in states where federal appeals courts have permitted such DNA claims, there has been "no evidence" of "any litigation flood or even rainfall." Indeed, a study that examined those parts of the country where courts have allowed claims like Skinner's shows that only 21 such cases were filed in the years 2000 through 2008.

Morrison says this may be because prosecutors increasingly consent to DNA testing, making it relatively rare for a defendant to bring a federal case.