Accessibility links
Fighters In Libya's West Mostly Cut Off From Outside In western Libya, government soldiers are surrounding individual towns and cities, with rebels holed up inside. It has been little covered by the Western media because the area is all but sealed off to everyone but residents and soldiers. 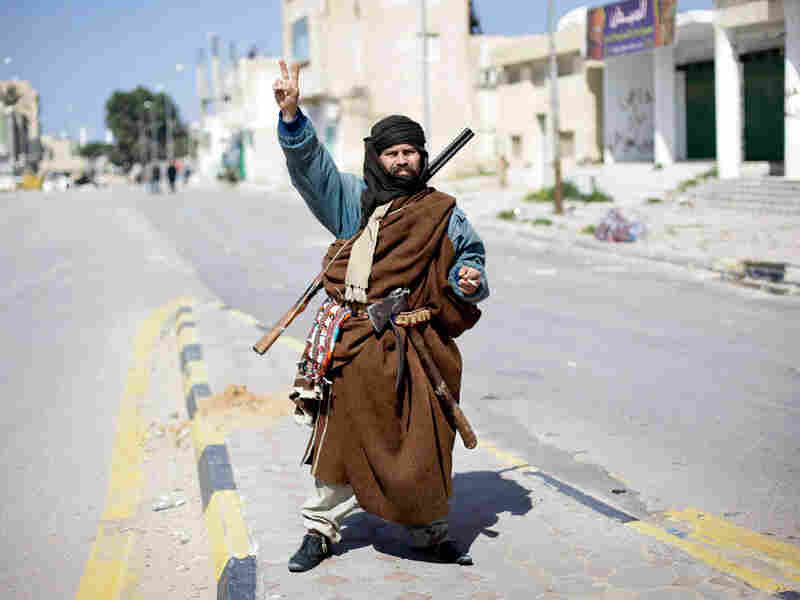 An armed resident makes a victory sign in the main square in Zawiya, Libya, on Feb. 27. Western Libya has been all but sealed off to everyone but residents and soldiers. Ben Curtis/AP hide caption

In eastern Libya, forces loyal to leader Moammar Gadhafi and anti-government troops have battled back and forth along the Mediterranean coast.

But the situation is different in western Libya, where government soldiers are surrounding individual towns and cities, with rebels holed up inside. It has been little covered by the Western media because the area is all but sealed off to everyone but residents and soldiers.

In Misrata, a city of 300,000 about 100 miles from the capital, Tripoli, a rebel fighter who said his name was Ahmed watched other young men learn how to use guns.

"I am helping [the] group starting preparing for the next fight," the 30-year-old said by phone. "We have some old people — they teach the young men how to use the weapons."

Ahmed said Gadhafi's army has been trying to gain control of Misrata for a week, using tanks and naval gunboats out on the Mediterranean. He said his group of fighters killed three of Gadhafi's men. Based on a cell phone they took from a dead soldier's pocket, Ahmed said he believes the man was hired to come to Libya from elsewhere.

From the remote village of Zintan, in the desert 150 miles south of Tripoli, a rebel fighter named Issa said by phone that Gadhafi's forces have been in back-and-forth battles there for several days.

"Five times the army tried to surround the city, and five times they went running," Issa said. "But last night was by far the bloodiest battle yet. We think they'll attack again — maybe not by land, because it's not flat here. I think they may come with airstrikes."

The true picture in western Libya has been difficult to pin down. Human-rights groups have expressed alarm about reports that the military is killing civilians in large numbers. Gadhafi's government says it's rooting out terrorists.

Maybe the biggest battleground over the weekend and into Monday has been Zawiya, a city within 30 miles of Tripoli that rebels took early in their campaign. The military has set up roadblocks around the city.

But Martin Fletcher, associate editor of The Times of London, found a way through Sunday in a taxi from Tripoli. He said he came across a scene of destruction — burning vehicles and buildings, trees uprooted and people recovering from serious injuries in a hospital.

"People [are] on respirators with severe head wounds; bullets to the abdomen; shrapnel all up their sides," he said.

Just as the Libyan government has been accused of twisting the truth, Fletcher found some evidence of that among the rebels.

The doctors did confirm that 30 people had died over the past few days in intense fighting. Fletcher left Zawiya on Sunday with a lasting impression of the rebels he met: a group of a men digging in, and mostly cut off from the outside world.

"They greeted us like the cavalry riding to the relief. They were beside themselves with excitement," he said. "Here were people who could finally tell the world of their plight, which is really important to them because if no one is watching, the government can do what it wants."

The government seems to have cut off Internet and phone service to much of western Libya. Most phone calls don't go through.