Accessibility links
Kentucky Governor Hopes Tourists Will Come Two-By-Two To Noah's Ark Park Ark Encounter, a planned Bible-based theme park, has received the support of Kentucky Gov. Steve Beshear, who says it will improve the state economy and create jobs. But critics say his plan to give the park tax breaks as a tourist attraction violates the separation of church and state. 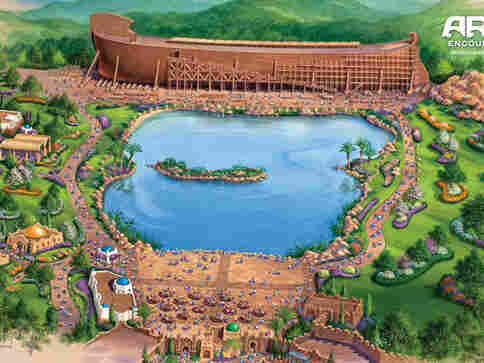 An illustration of the park, which will include a replica of Noah's Ark, a first-century Middle Eastern Village, a Tower of Babel and a Walled City. Courtesy of Ark Encounter hide caption 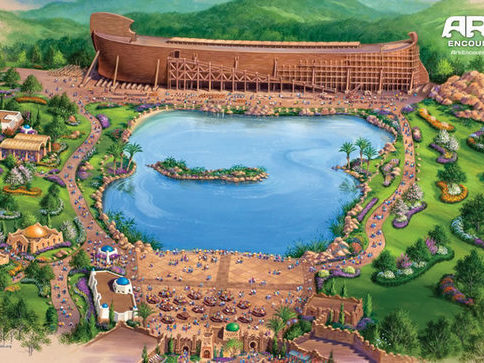 An illustration of the park, which will include a replica of Noah's Ark, a first-century Middle Eastern Village, a Tower of Babel and a Walled City.

How far will a state go to improve the economy and attract jobs? In Kentucky, there are plans for a religious theme park, which has the support of the governor despite critics who say the state shouldn't give tax breaks for religious purposes.

The park's centerpiece will be a replica of Noah's Ark, a wooden boat longer than a football field. Other attractions include a first-century Middle Eastern Village, a Tower of Babel and a Walled City. When Democratic Gov. Steve Beshear announced Kentucky's support last December for the "Ark Encounter," he touted the economic impact.

"This is a $150 million investment that is projected to create nearly 900 jobs, including almost 550 full-time jobs," Beshear says.

Private investors and a Christian ministry called Answers in Genesis plan to build the park in Northern Kentucky's Grant County, south of Cincinnati. In 2007, the nonprofit organization opened the Creation Museum in nearby Petersburg.

Exhibits at the museum teach that the Earth is 6,000 years old and was created in six 24-hour days. Even though many have mocked the museum, founder Ken Ham says more than a million people have visited — 80 percent of which are from out of state.

"As people have come through the various exhibits, a number have often asked us about the Noah's Ark exhibit and said, 'Why don't you build Noah's Ark?' " Ham says.

That's what it is. We make no apology about that. It is a theme park centered around biblical history.

Kentucky's Grant County is a tight-knit community where unemployment hovers near 11 percent. Flower shop owner Marlene McComas — who has been on Main Street in Williamstown for 32 years, watching as other stores have closed — hopes the new jobs will bring new business to a dying town.

"I stand over here and watch the people lined up at the Community Action Center every month to try and get help with their heat," she says. "Maybe that'll give those people a job so they can pay for their heat."

Still, the promise of jobs and a flood of tourists doesn't sit well with every resident.

Thomas Brackman, a geologist at Northern Kentucky University, says the Creation Museum already poses problems for him as a teacher. His out-of-town family and friends are writing him now about this latest proposal.

"And of course it's about the ark, and I have to write back saying, 'Yes, and it's right down the road from us,' " he says. "This ought to bring notoriety to Northern Kentucky."

Separation Of Church And State

Editorial boards of Kentucky's two largest newspapers have railed against the project. So have academics who disagree with the creationist view of science. 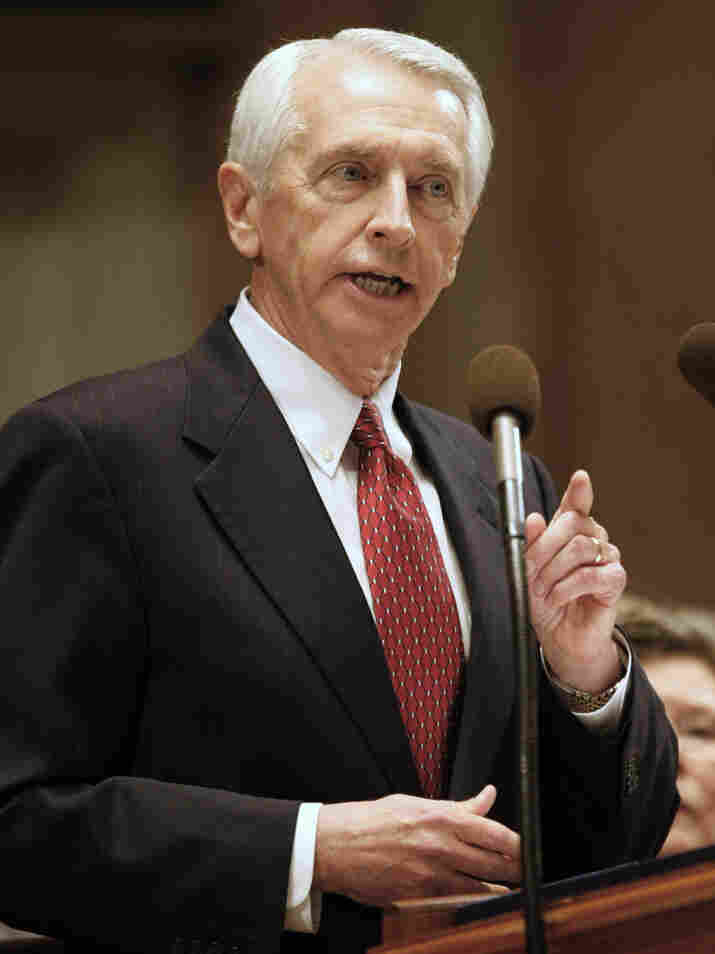 Kentucky Gov. Steve Beshear delivers his fourth State of the Commonwealth address to a joint session of the General Assembly in Frankfort, Ky., on Feb. 1. Beshear announced in December that he supports plans for a Christian theme park because it would create about 900 jobs. Ed Reinke/AP hide caption 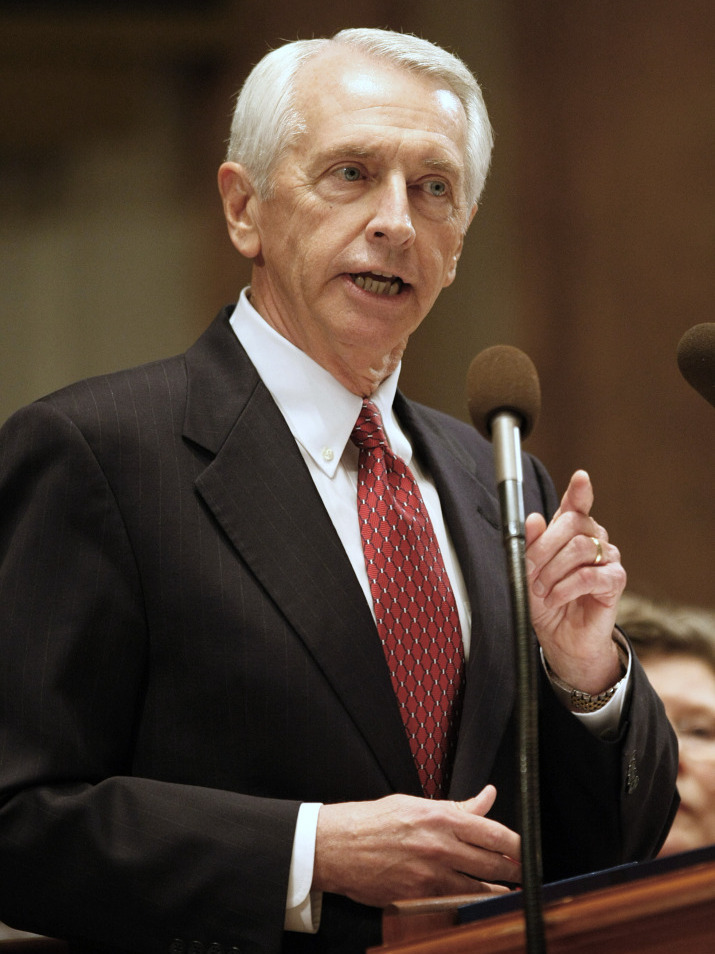 Kentucky Gov. Steve Beshear delivers his fourth State of the Commonwealth address to a joint session of the General Assembly in Frankfort, Ky., on Feb. 1. Beshear announced in December that he supports plans for a Christian theme park because it would create about 900 jobs.

Ham, the CEO of Answers in Genesis, says increasingly there's a bias against Christians who take the book of Genesis as literal history. He says the theme park's intent is to create more awareness of the Bible.

"That's what it is," he says. "We make no apology about that. It is a theme park centered around biblical history."

What's getting more attention in Kentucky, though, is the proposed tax rebate. Under Kentucky's Tourism Act, the park could recoup more than $37 million based on ticket sales and the money brought in over the course of 10 years.

Erwin Chemerinsky, a constitutional scholar at the University of California, Irvine, says building a Bible-based theme park isn't an issue. But giving it tax breaks violates the constitutional separation of church and state.

"The Supreme Court has said that the government can't act with the purpose or effect of advancing religion," he says. "This project is all about advancing religion even as the governor of Kentucky has described it. In that way, it violates the establishment clause of the First Amendment.

Developers hope to begin building the ark this spring and to load up the animals two by two in 2014.