Accessibility links
Asian Nations Try Not To Get Scorched By 'Hot Money' Investors have been pouring money into emerging markets in Southeast Asia. A similar flood of cash in the 1990s caused economies to overheat and governments to crumble. This time around, the countries may have learned lessons to prevent a meltdown. 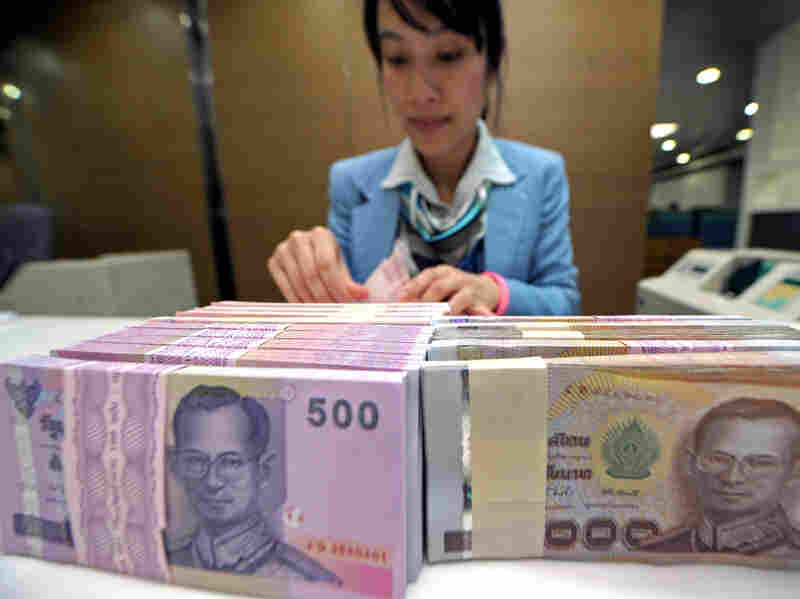 An employee counts bundles of Thai bahts at Krung Thai Bank in Bangkok in October. A tidal wave of money is pouring into Asia and driving up regional currencies. Pornchai Kittiwongsakul/AFP/Getty Images hide caption 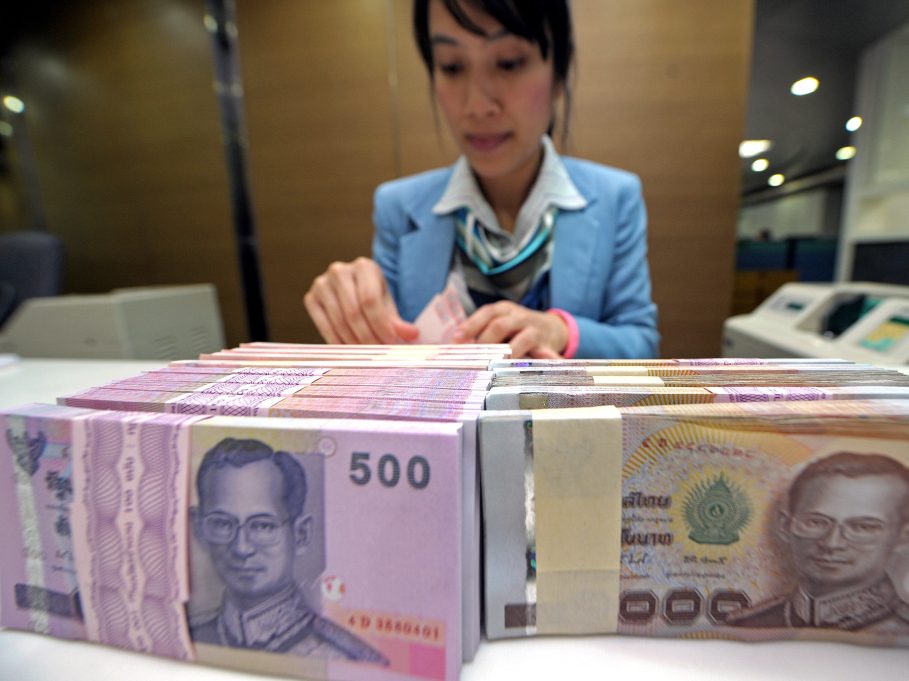 An employee counts bundles of Thai bahts at Krung Thai Bank in Bangkok in October. A tidal wave of money is pouring into Asia and driving up regional currencies.

With the U.S. and other first-world economies deep in debt and growing sluggishly, most of the world's economic expansion is now coming from developing nations.

Investors, meanwhile, have been pouring money into emerging markets, pumping up their stock prices and currency exchange rates.

Nearly a decade and a half ago, a similar flood of money caused Asian economies to tank and governments to crumble. This time, governments in Southeast Asia may have learned lessons to avert an economic meltdown similar to what took place then.

Soraphol Tulayasathein, an economic stability analyst at the Thai Finance Ministry, has been watching the tides of foreign capital surge in and out of Thailand recently, and luckily, this time, the economy has not been washed away.

"What's happening now," he observes, "is that the asset prices, even the stock prices, have not reached the 1997 level before the Asian crisis, so we're not reaching the bubble stage yet, but we're seeing a lot of the fluctuation."

Last year, developed countries' governments borrowed or printed money to stimulate their economies. Hundreds of billions of dollars of it flooded into emerging markets in search of higher returns. Thailand got about $10 billion (by contrast, 2009 inflows were near zero), which helped its currency, the baht, to appreciate by 9 percent last year and its stock market to gain 41 percent.

Paul Gambles, a managing partner with the Bangkok-based consultancy MBMG Group, reckons that in the past month or two, a billion dollars of that so-called "hot money" has now exited Thai equities markets.

"It's almost like, you know, capital on steroids," he says animatedly. "One day it's going crazy, and then the next day it's flowing back out again, the stimulus effect has worn off and then we get another stimulus. It's waves and waves of capital inflows and outflows, and that's what markets really don't like."

Governments, Gambles points out, prefer money to enter the country in the form of investment in infrastructure, factories and long-term projects. But investors' money is increasingly aimed at generating quick returns through short-term bonds and stocks. And while the bulk of inflows used to come from trade, the majority now comes from private investment.

More money is flowing into Southeast Asia because the world's largest developing economy, China, is keeping the money out. China uses capital controls to do that. Fraser Howie, a Singapore-based analyst with brokerage and investment firm CLSA, says that many observers fail to take China's capital controls into account.

"They treat China as if it was any other country, but it simply is not," he says. "The capital controls are still relatively strict. There's a lot of slippage and a lot of leakage there, but ultimately international investors are not easily able to get their money into China."

Thailand, Soraphol laments, is stuck in the middle.

Last year, Thailand and some of its neighbors began to try to deter hot money by using capital controls, such as taxing foreign earnings on the short-term bond market.

Some economists abhor any form of government meddling in the economy, but Howie says that governments in Asia now generally see capital controls as a legitimate economic tool of last resort.

"The extreme cases or extreme events of recent years have allowed people to sort of accept currency controls," he says, "but one shouldn't forget, they are distorting, and they are leading to misallocation of capital."

A Return To Asian Dominance?

In 1997, the Asian financial crisis wiped out massive wealth and popular support for authoritarian governments in Indonesia and Thailand whose legitimacy depended on economic growth.

Since that crisis, Thailand and other hard-hit countries have recapitalized their banks and floated their currencies. Compared to Western countries, they have little government debt, plentiful foreign exchange reserves and tight monetary policies.

This, says Gambles of MBMG Group, ensures that capital will continue to flow to Southeast Asian emerging markets for the foreseeable future.

"The next 10, 15, 20 years," he predicts, "is when we see the assertion of emerging market — but primarily Asian — dominance in the world as something that's absolutely inevitable. I don't think there's any policy anybody can do to stop this."

Asia's leading role in the global economy is hardly an anomaly, Gambles notes. It's a return to the status quo for most of the past thousand years.