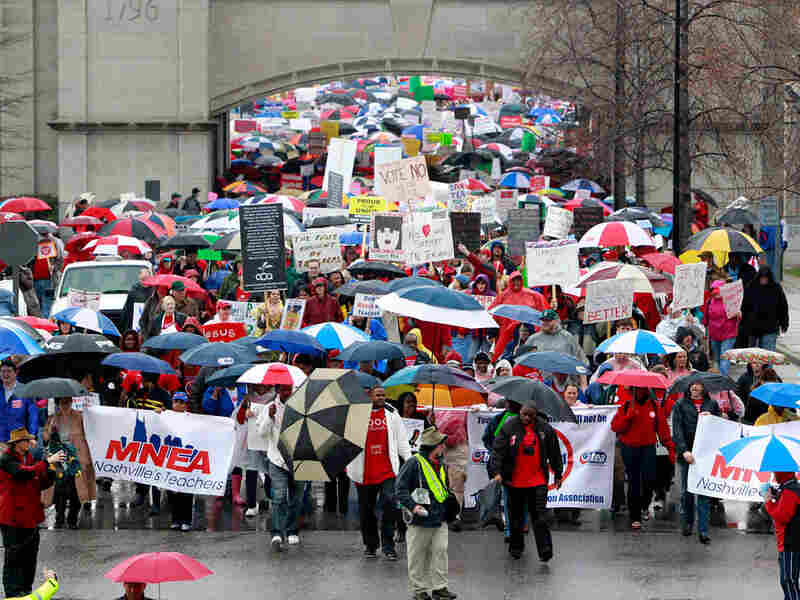 People opposing legislative efforts to do away with teachers' collective bargaining rights march to the Legislative Plaza for a March 5 rally in Nashville, Tenn. Protesters from the Tea Party as well as the Tennessee Education Association converged on the state Capitol to voice competing views on the issue. Mark Humphrey/AP hide caption

"I'm glad to see y'all here today in the rain because this doesn't scare us," Holman said. "We've done bus duty in worse than this."

Teachers descended on the Tennessee state Capitol, many bused in by unions, to protest Republican-sponsored bills that would limit their collective bargaining rights. The president of the National Education Association, Dennis Van Roekel, even made the trek.

Marching to the state house, Van Roekel took the lead. The NEA president has hopscotched the country as teachers and other public employees protect their collective bargaining rights from Republican lawmakers.

If collective bargaining is retained in Tennessee, that would have a strong, positive effect I would think nationally for the labor movement.

In Tennessee, teachers are some of the only public employees with the legal authority to negotiate pay, benefits and working conditions. Several bills in the Legislature would diminish the union's role, including one that would strip collective bargaining altogether. And the justification isn't a budget shortfall. The sponsors say their proposals are meant to reform education.

"They're unionbusting bills as far as I'm concerned," said Sandy Smith, a special education teacher and union board member. "I haven't seen a single one that has any impact at all on the quality of a child's education."

The threat to collective bargaining also motivates non-union members like Jennifer Casiello, an art teacher who isn't the union's biggest fan. "Unfortunately, my experience — things that I've seen — they're most active when they're protecting teachers that might not need protecting," she said.

But the union does negotiate a contract on behalf of 52,000 Tennessee teachers, union member or not. "Now, if we lose that contract, what does that mean? What will get cut?" Casiello asked.

'A Conflict Of Interest'

However, not everyone protesting at the Capitol was against the legislation.

"Fifty thousand unemployed Tennesseans would love to have your job," said Alan Rader, a Tea Party member, as he read a sign he was holding at a much smaller rally. 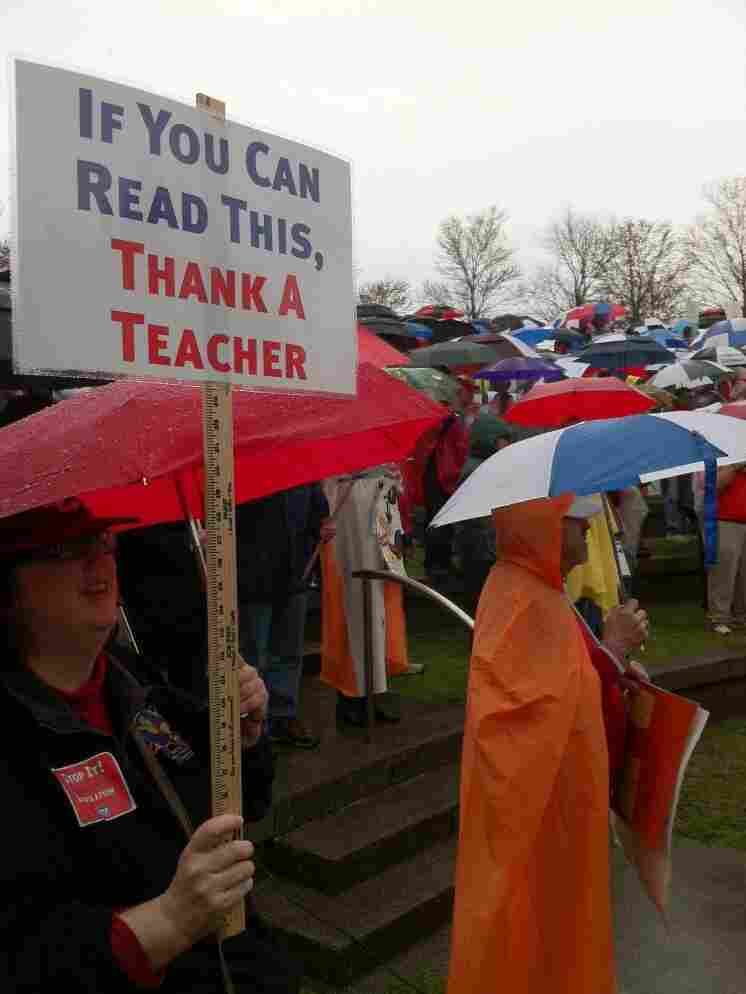 Teachers and union supporters gather Saturday around the Tennessee state Capitol to protest a bill that would strip educators of their collective bargaining power. Blake Farmer/WPLN hide caption 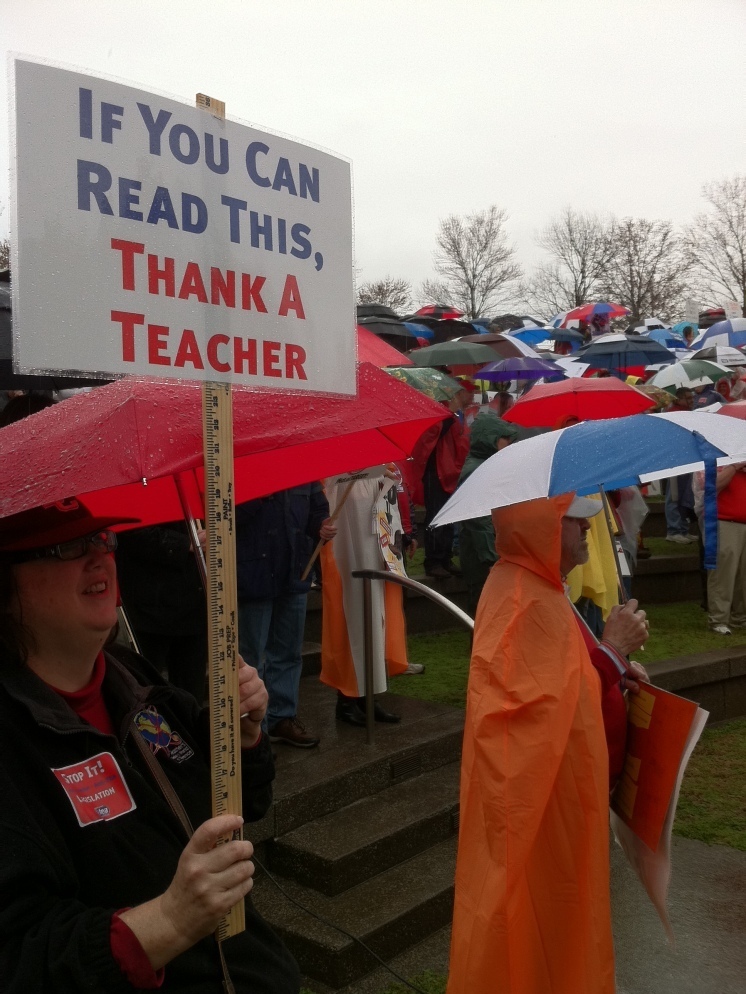 Teachers and union supporters gather Saturday around the Tennessee state Capitol to protest a bill that would strip educators of their collective bargaining power.

The were assembled outside the statehouse, which sits on a hill that overlooked the mass of teachers.

"The people down there don't get that," Peker said. "They are, in the communist agenda, useful idiots."

The message from teachers may be getting through to some Republicans, who hold majorities in the Tennessee Legislature. Over the past week, the speaker of the state House, Beth Harwell, said she was not sure she wanted to eliminate collective bargaining entirely.

"I think there will be a few changes made to the bill," Harwell said.

Preserving the status quo would be a bigger win in Tennessee than in Midwestern states, says labor expert Dan Cornfield of Vanderbilt University. He says unions in this right-to-work state are used to hostility. Losing collective bargaining wouldn't be quite the shock it would be elsewhere.

"That would only be reaffirming of a traditional, weak labor movement in the South," Cornfield says. "If collective bargaining is retained in Tennessee, that would have a strong, positive effect I would think nationally for the labor movement."