Accessibility links
Frank Luntz: How To 'Win' With Smart Messaging The Republican media strategist has helped craft many sound bites and political phrases during his career — from "death tax" to "the Contract with America." In his book, Win, Luntz argues that careful communication is as essential to business as it is to politics. 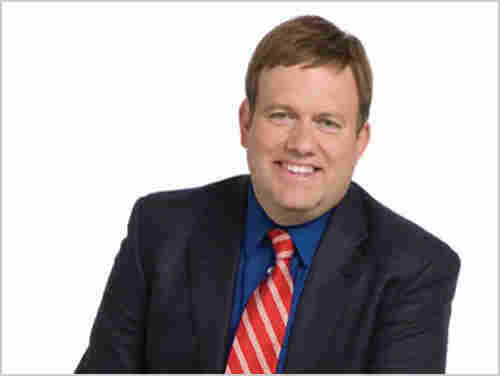 Republican strategist Frank Luntz is known as a master of political messaging. In his book Win, he argues that principles of good political communication also apply to business. Donna Svennevik/Hyperion hide caption

According to Republican strategist Frank Luntz, Bill Clinton won the presidency in 1992 "because he, more than any other political figure, understood what was happening in the country at that time, and had an innate ability to communicate it right back." Luntz analyzes this victory and others in his new book Win: The Key Principles to Take Your Business from Ordinary to Extraordinary.

As a longtime media strategist, Luntz has helped craft many sound bites and political phrases during his career, from "death tax" to the "Contract with America." In Win, Luntz argues that careful messaging is as essential to business as it is to politics.

People "want to be inspired. They want to aspire to something. ... You can have the best product, the best service, the best argument in a debate," says Luntz. "But without the effective words you still lose. In the end you need good principles and good language if you are to succeed."

Politicians are under particular pressure to communicate effectively, says Luntz. "They are living, breathing embodiments of the language they use ... when you're selling a product or service it doesn't have to be absolutely perfect," he says. "When you're a politician, one wrong word changes the ... meaning of something."

As a pollster, Luntz has conducted extensive surveys and focus groups for political clients. One of the most powerful political advertisements he's tested, he says, is Republican Florida Gov. Rick Scott's slogan, "Let's get to work."

"He used 'lets get to work' to say, all these politicians talk — it's time to do," says Luntz. "Everybody else talks about the problem — it's time to find a solution."

Visuals are also critical to effective messaging, says Luntz — something that Scott used to his advantage in a campaign advertisement invoking the "Let's get to work" slogan. The ad depicts Scott "moving down an alleyway, putting his jacket on and looking like this guy's gonna kick some butt. ... 'Let's get to work' says, 'Lets get it done.' "

Equally powerful in both political and commercial messaging, says Luntz, are images that listeners or viewers must supply themselves. "The perfect opening is 'imagine,' " says Luntz, "because imagine allows you to communicate in the eyes or vision of the listener rather than yours."

Luntz looks to the classic George Orwell novel 1984 to illustrate the point. "Room 101 --" says Lunz, referring to the torture chamber depicted in the book, "we all have our own imagination about what that looks like. When we saw the movie, and we saw what they said Room 101 was, it didn't work for anybody. Because it's not how we imagine it," says Lunz.

"To imagine 'the American dream' allows the listener to define the communication on their own terms. That's what makes it so powerful." 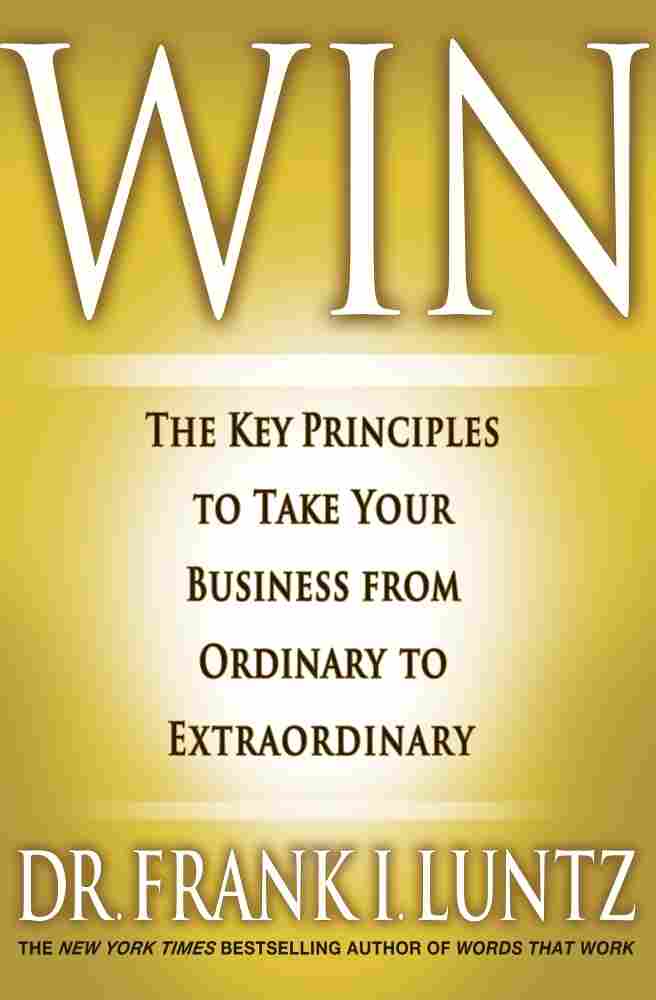 Win: The Key Principles To Take Your Business From Ordinary To Extraordinary
By Frank Luntz
Hardcover, 320 pages
Hyperion
List price: $25.99

Political Persuasion: say what you mean and mean what you say

Democracy is the art and science of running the circus from the monkey cage.

President Barack Obama has proven that even a twenty-four-hour day can be a lifetime. The day he was sworn into office, he had a remarkable 68 percent job approval and a 70 percent personal favorability rating — higher than all but two presidents since FDR. Since then, it has all turned upside down. As this book goes to press, his personal favorability rating still hovers around 60 percent, but his job approval is in the mid-40s, and less than 40 percent support his policies. Not good. Another age-old adage in politics has come true for him: Pleasing people while governing is a lot harder than doing it as a candidate.

Obama's successful push for a national health-care plan after decades of failure transformed the president's image in ways he did not expect. His campaign for president promised to bridge our country's deep partisan divide; instead, the American people believe he is forcing it wider. He pledged to govern from the middle, but is now increasingly labeled as "liberal," left-wing," or worse, "socialist."

Sure, he has his supporters, and Americans still want him to succeed so that America succeeds. But they are worried about what he has done — and worse yet, what he might do next. The faith and confidence in his presidency cratered faster than for any president in the past half century except for Gerald Ford, and Ford was an accidental president. With the loss of Democratic governorships in Virginia and New Jersey, the defeat of the Kennedy legacy in Massachusetts, and the rise of the Tea Party activists, Americans sent a clear message to those in Washington: STOP.

But they didn't stop. Finally, the American people put their foot down and applied the brakes, yielding a Republican majority in the House and the third straight "Rubber Band" election. In 2006, 2008, and now 2010, Americans have had their patience stretched to the breaking point, firing a Washington run amok, and are demanding their new leaders to snap back to attention. For years now, the political elite has overpromised and underdelivered, which is why they keep losing elections. The reality looking forward is simple: If the Republicans don't deliver on their promises, they're finished. If the Democrats simply continue doing what they're doing, they're finished.

Both sides are promising to fulfill the will of the people, but people aren't asking for promises. They're asking for new priorities — their priorities.

The agenda of America is simple. In broad terms, Americans want the government to spur job growth, but not by subsidizing more government jobs with taxpayer dollars. They want Washington to balance the budget and reverse the growing government influence over our lives. They want government to encourage success, allow failure, punish those who break the law — and then get out of the way. And above all, they want politicians to follow through on their promises, even if that means tempering those promises in the first place.

It's not all about policy; it's also about personal accountability. House Majority Leader Eric Cantor, the creator of the YouCut spending reduction program that puts the congressional budget knife in the hands of taxpayers, is linguistically visual, talking about his commitment to "drain the swamp rather than learning to swim with the alligators." Clearly he gets it. Voters want their representatives home in their districts holding monthly town hall sessions. The single worst strategic mistake House Democrats made in 2010 was canceling scores of public meetings, denying their constituents the chance to be heard. Hell hath no fury like a voter scorned; their voices were silenced during the health-care debate, so they spoke in unison on Election Day.

The last time Republicans gained control of the House of Representatives, in 1994, they achieved more in the first hundred days than some congresses in two years. From welfare reform to tax cuts, from a balanced budget amendment to term limits, they successfully passed every one of their ten Contract with America items. Some of it stalled in the Senate, and much of it was vetoed by President Clinton, but they held on to their majority for a dozen years because of all they did in those first hundred days. They worked with the president when they could, opposed him when they couldn't — and the American people were satisfied with the result.

The national political narrative today is most accurately defined not by red states versus blue states ... Republicans versus Democrats ... or even Tea Partiers versus Progressives. The battle in America is between the people (us) versus Washington (Obama/Pelosi/Reid) and Wall Street (insert name of big bank here). It's the overworked, overtaxed, over-hassled American versus those who create the rules and always seem to win. The chasm to be bridged is not between political parties or philosophical ideologies, but between the results Americans demand and the excuses they receive from whoever is in charge.

Americans today are more informed about decisions made by their elected representatives than ever before. In the past, sneaking isolated provisions pushed by lobbyists or special interests into thousand-page legislation was commonplace, and elected officials could do it without fingerprints or fear of voter reprisals. It was often weeks after a bill was signed into law, if at all, before someone discovered the offending clause. Now, fortunately, all legislation is posted online, allowing regular citizens and activist bloggers to cull through it page by page, looking for the most egregious add-ons. But the awareness of how crafting legislation really works — and how laws are actually passed — has heightened public frustration. A major component of the perception that Washington cannot do anything right is the belief (often valid) that lobbyists write many of the bills. But thanks to advances in technology, communication, and twenty-four-hour cable television, it makes it a lot harder for politicians to hide their add-ons, earmarks, backroom deals, and lobbyist-written loopholes.

From Win: The Key Principles To Take Your Business From Ordinary to Extraordinary by Frank I. Luntz. Copyright 2011, The Word Doctors, LLC. Excerpted by permission of Hyperion. All Rights Reserved. 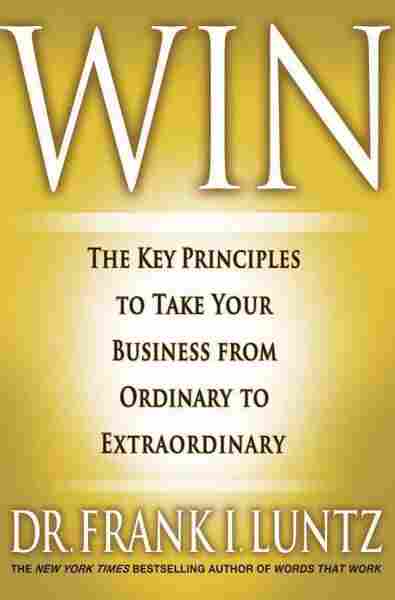 The Key Principles to Take Your Business from Ordinary to Extraordinary

by Frank I. Luntz

Title
Win
Subtitle
The Key Principles to Take Your Business from Ordinary to Extraordinary
Author
Frank I. Luntz