Accessibility links
Bahrain's Poor Live In The Shadow Of A Monarchy The island kingdom's capital city, Manama, is lined with glass-and-steel skyscrapers that reflect the blue-green waters of the Persian Gulf. But less than 10 miles away is another Bahrain — the poor village of Karzakan. There, Shiite villagers say they're treated like second-class citizens in a country ruled by minority Sunnis. 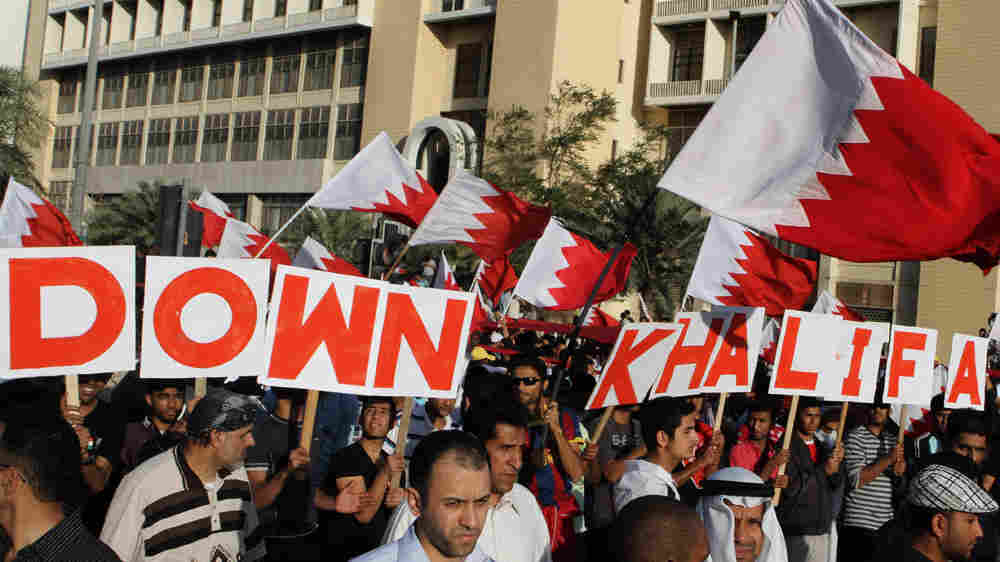 Bahraini Shiite protesters march during an anti-regime demonstration in the capital, Manama, last week. Shiites make up the majority in Bahrain, but many say they're treated like second-class citizens in the Sunni-ruled country. Adam Jan/AFP/Getty Images hide caption

Protesters in Bahrain are in their fourth week of a campaign to topple the government there, while the royal family attempts to hold on after more than two centuries of rule.

Far from the demonstrations, people in some Bahraini villages say they feel left out of the island's prosperity and blame religious discrimination, official corruption and neglect.

Bahrain's capital, Manama, is lined with glass-and-steel skyscrapers that reflect the blue-green waters of the Persian Gulf. Less than 10 miles away is another Bahrain — the poor village of Karzakan.

The sprawl of concrete houses is home to thousands of Shiite Muslims, who make up the majority in Bahrain. But many say they are treated like second-class citizens in a country ruled by the minority Sunnis.

You feel burnt inside. You're living in your own country, and other people are given preference over you.

Hassan Mohammed Alshaikh says he studied to be a history teacher.

"I put forward my application," he says. "They wanted to see my credentials, and then they said, wait, wait, wait. And then afterward, Sunnis came and took the jobs."

Alshaikh says the work went to Sunni Muslims from other Arab countries. After two years, he took a lower-paying job as an electrical maintenance man.

Of course, he has no way to prove discrimination. But his complaint is one heard over and over again at protests here.

He says giving up on the career he dreamed of still hurts.

"You feel burnt inside. You're living in your own country, and other people are given preference over you," he says.

Alshaikh shares a dilapidated courtyard home with several generations of family. The roof of a shed has collapsed next to the chicken coop, and conditions for the people living there are cramped. 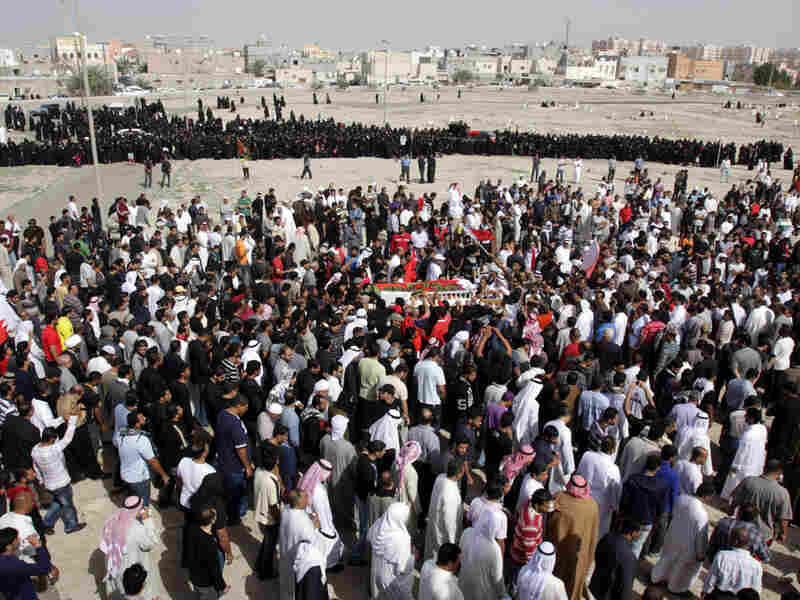 Thousands of Bahrainis gather in February at a cemetery in the poor western village of Karzakan, carrying the body of a man killed during anti-government clashes. Thousands of Shiites live in Karzakan, less than 10 miles from the capital, Manama. Hasan Jamali/AP hide caption

Alshaikh opens the door to a tiny room with a double bed, where three people sleep. One of his relatives, a middle-aged woman, appears. She speaks from behind a veil.

"We're very lost here," says the woman, Zainab, who won't identify herself beyond that for fear of government reprisals. "You call this a living?"

A Playground For The Wealthy

Jassim Mohammed Hassin serves on Karzakan's municipal council. He grew up near what used to be Karzakan's beach, which looks out toward Saudi Arabia. He remembers playing in locally owned farmland along the water's edge.

"We used to enjoy a lot of our time here," he says. "We used go to the farms, play on the beach, swimming, fishing, everything."

Today, Karzakan has just 200 yards of shoreline; the rest is dominated by huge walled villas. Hassin says the royal family and their friends put pressure on local people in the 1990s to sell at below-market rates.

"About 20 percent or less," he says. "The land was worth a lot of money, and they got very little."

Just before protests erupted last month in Bahrain, the government built a concrete block near the water's edge here with a message: It promised the community more than a mile of new waterfront.

Hassin says he has no idea where that waterfront will come from.

Protests Give Voice To Long-Held Frustrations

Maha Hussain Al Mandeel, an official in Bahrain's Ministry for Social Development, says the problems in villages like Karzakan are complex.

Mandeel says only a small percentage of people actually live below the poverty line. But she says the government should do more to lift people up and ensure stability. "It's not economics," she says. "It's how the government is spending the budget. It should be [spent] towards moving people from poverty to the middle class."

She says poorer residents have been frustrated by this for years. Then, the protests in North Africa inspired them.

"They have been complaining," she says. "It's just they had the chance now because everywhere in other countries they have riots, people wanted to do the same."

Mandeel says Bahrain's King Hamad bin Isa Al Khalifa has improved governance. But, speaking personally, she says the protests show that it's time for a fully elected legislature. Not one like now, where the upper house is appointed.

And, Mandeel says, the king should play a more ceremonial role, as royals do in England.

"My opinion — having a kingdom, or having a king, makes the country more stable," she says. "But the government should be [a] more democratic one."

On the streets of Manama these days, that is the protesters' minimum demand: That Bahrain become a constitutional monarchy — and the first fully democratic nation on the Arabian peninsula.