Accessibility links
A Hearing To Ask: Are Muslims Being Radicalized? House Homeland Security Committee Chairman Rep. Peter King says a hearing on "Radicalization in the American Muslim Community" will help lawmakers better understand the threats posed by radicals living in the United States. 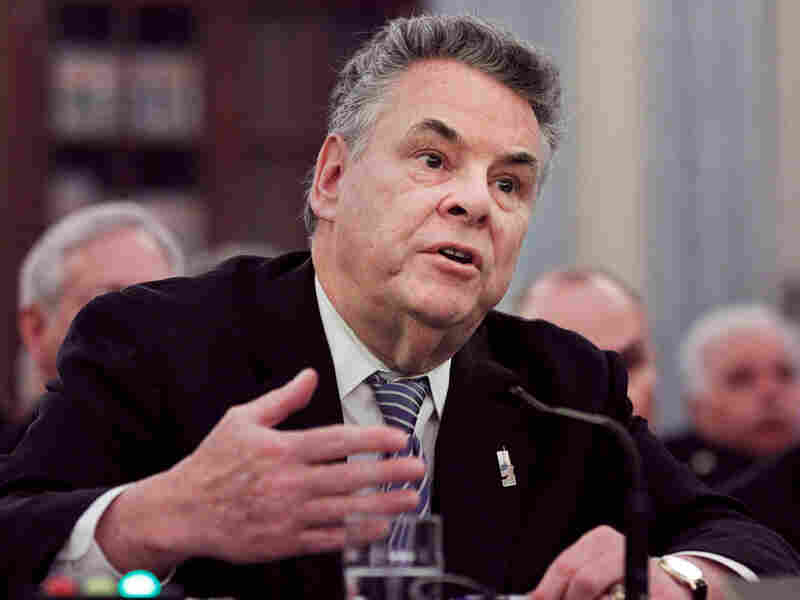 Some call the hearing a witch hunt. Others say it's a reality check.

House Homeland Security Committee Chairman Rep. Peter King, a Long Island Republican, believes the hearing he has scheduled for Thursday morning is a valuable investigation into the "radicalization" of many U.S. Muslims.

The hearing, entitled "The Extent of Radicalization in the American Muslim Community and that Community's Response," will help lawmakers better understand the threats posed by radicals who live in the United States — and are tolerated by their fellow Muslims, he says.

"We are under siege by Muslim terrorists, and yet there are Muslim leaders in this country who do not cooperate with law enforcement," King told Fox News. "We have the reality that al-Qaida is trying to recruit Muslim Americans, and yet we have people in the Muslim community who refuse to face up to this."

But Corey Saylor, at the Council on American Islamic Relations, says that might be a valid topic — except that he believes King has an agenda.

Stacking The Deck Against Muslims?

"He's said things like, 'There are too many mosques in America.' He's alleged that 80 percent of American Muslim leadership is extremist, yet never produced a single bit of evidence to back that up," Saylor says. "So that's the kind of thing that leads you to the Salem witch trials, the Inquisition, and frankly, McCarthyistic hearings."

Saylor fears King is stacking the deck against Muslims by calling witnesses who do not represent most Muslims in this country. He points to the primary witness, M. Zudhi Jasser, a doctor in Phoenix who founded what Saylor says is an obscure group called American Islamic Forum for Democracy.

For his part, Jasser says, it's clear that many Muslims have been radicalized: There have been 60 terrorism plots in the past two years.

"Just look at the arrests — from Portland to Baltimore to the Times Square bomber, and on and on, there have been more and more arrests," he says. "So this is not just a pie-in-the-sky discussion. This is a reality that we have to deal with."

Jasser, who says his group has about 2,000 members, says America needs to understand the root cause of this violence. He describes this root cause as a "political movement of Islamism that has as a goal to create Islamic states, that want to put into place Shariah law, that give women third-class status, that give other faiths secondary status, that give moderate Muslims or critics of imams no voice."

Saylor calls those assertions unfair. "Dr. Jasser is fearmongering," he says. "The vast majority of American Muslims are completely opposed to anything that would change the fundamental nature of the U.S. The Constitution is the law of the land, and we like it that way."

'We Are Being Watched'

Still, even Saylor acknowledges that some Muslims are swayed by radical ideas from abroad. A case in point is Anwar al-Awlaki. Since he moved to Yemen in 2004, the American-born cleric has been calling on Muslims to wage war against America.

"Jihad against America is binding upon myself, just as it is binding on every other able Muslim," Awlaki said in one of his many YouTube video lectures. "The more crimes America commits, the more mujahedeen will be recruited to fight against it."

And Awlaki is casting a long shadow of suspicion on Muslims, especially at Dar Al-Hijrah Islamic Center in Northern Virginia. Awlaki was an imam there before he left the country. Worshippers disavow Awlaki's views, yet many feel a surge of hostility toward their faith. Maura Yasin says Muslims are being singled out because of a few bad actors.

And Muslims are not only being smeared, says Hussein Goal. They're being targeted as well.

"It is no news, it is no-brainer to our community here that we are under surveillance, and we are being watched — our e-mails, our phone and everything."

And yet, police have to do something to prevent attacks, says Tariq Nelson — even if that means keeping a close eye on his mosque.

"We applaud it when it's white supremacists, neo-Nazis, the militia groups, and all these kinds of people," he says. "It's good for the goose but not good for the gander."

Johari Abdul Malik, an imam at Dar Al Hijrah, agrees. But he says Muslims are often the key to stopping terrorism. Just in the D.C. area, it was Muslims who thwarted two recent plots.

"The guy on the Metro — it was somebody in our community who tipped off law enforcement," he says. "The five boys who went to Pakistan, it was their mothers and fathers who went to the imam and said, 'Imam, something is going on'; the imam called one of our national Islamic organizations, and that group said, 'We have to call the FBI right now.' "

Johari points to statistics that show more than a third of all such plots were foiled with the help of Muslims — a figure that he hopes will come up in the hearing on Thursday.