Accessibility links
Weekly Standard: Citizens, Not Subjects, Of The State In light of the protests in Wisconsin and elsewhere over a budget repair bill that would strip public employees of collective bargaining rights, Peter Wehner of The Weekly Standard argues that now is the time for Americans to focus more closely on self-government rather than being treated as clients of the state.

Weekly Standard: Citizens, Not Subjects, Of The State

Weekly Standard: Citizens, Not Subjects, Of The State 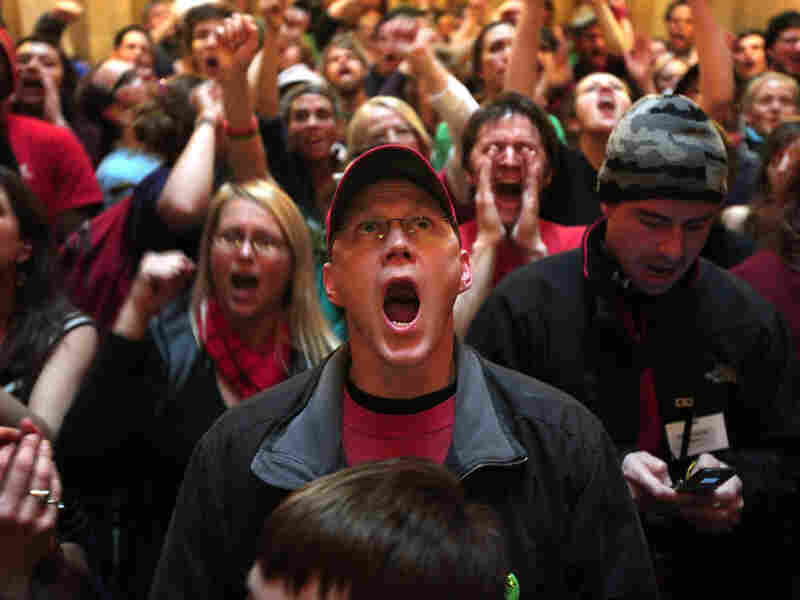 Demonstrators protesting below the assembly chamber where Wisconsin Governor Scott Walker was delivering his budget address to a joint session of the legislature at the capitol last week in Madison, Wisconsin. The partisan standoff continues this week, though Gov. Walker may be showing signs of compromise. Scott Olson/Getty Images hide caption 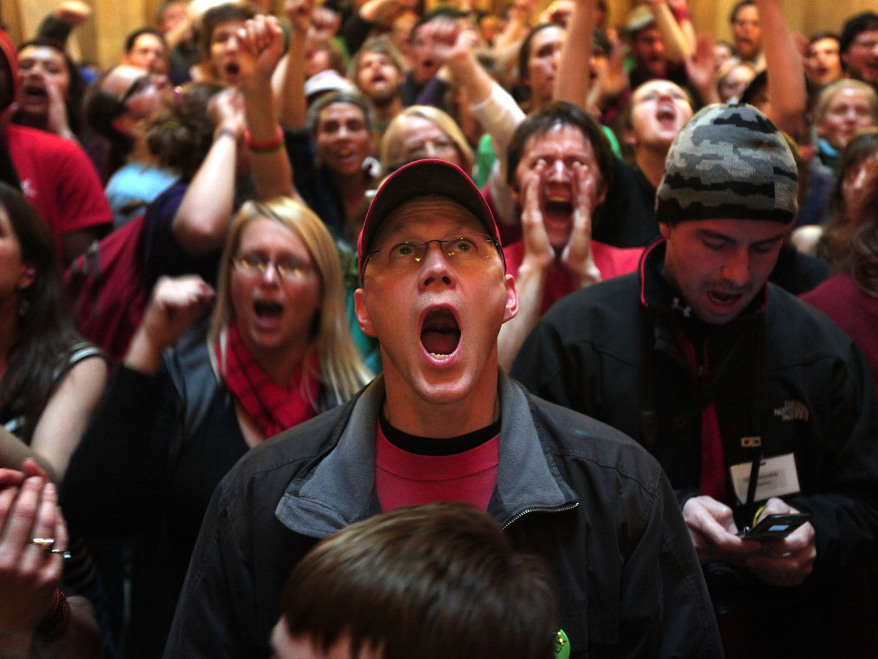 Demonstrators protesting below the assembly chamber where Wisconsin Governor Scott Walker was delivering his budget address to a joint session of the legislature at the capitol last week in Madison, Wisconsin. The partisan standoff continues this week, though Gov. Walker may be showing signs of compromise.

Peter Wehner, former Director of the White House Office of Strategic Initiatives, is a Senior Fellow at the Ethics and Public Policy Center.

In recent months, in response to a series of austerity measures, we have seen civic unrest in the streets of London, Athens, and other European capitals. Some of the cuts that sparked the chaos are quite moderate. In France, for example, violence broke out over the government's proposal to raise the retirement age from 60 years old to 62.

We are now seeing protests in America — including in Wisconsin, where over the last couple of weeks tens of thousands of people have marched on the state capitol to register their unhappiness with Governor Scott Walker's request that many of the state's public employees limit their collective bargaining rights to negotiations over pay rather than benefits. What started in Wisconsin appears to be spreading to other states.

In each place there are different factors that explain what we're witnessing. But as a general matter what is unfolding in nations throughout the West, including in America, are the predictable effects of increasing dependency on the state. This dependency creates certain expectations and patterns of thought, including an entitlement mentality. Every concession that has ever been gained is viewed as an unalienable right and therefore irreversible. The result is that government benefits are added one on top of another, with any effort to rein them in viewed as an "assault" (to use President Obama's word) on this or that group.

The great project for this generation is to offer an alternative to this governing philosophy of entitlement, to put in place policies that encourage individual responsibility and dignity, self-reliance and self-government.

We have seen something similar occur with welfare reform, where in the mid-1990s Americans changed the incentives away from chronic dependency toward work. The message was clear: The days of rewarding idleness and irresponsibility were over. Within a matter of years, the welfare case load declined by more than 60 percent. And not only did the numbers of people on welfare plunge, but, in the wake of the welfare-reform bill, overall poverty, child poverty, black child poverty, and child hunger all decreased while employment figures for single mothers rose.

We are seeing a similar debate with education reform. Governors such as Mitch Daniels of Indiana are pushing for their states to become, in Daniels's words, "the first state of full and true choice by saying to every low and middle-income Hoosier family, if you think a nongovernment school is the right one for your child, you're as entitled to that option as any wealthy family." This, Daniels believes, will encourage parents to become less passive and more involved in the education of their children.

The next arena in which self-government needs to reassert itself is entitlement programs. There is, of course, a fiscal imperative behind the need to address the drivers of our debt. But there is also a civic imperative for entitlement reform. Individual citizens need to be given more ownership over decisions that affect their lives. They need to be treated as citizens instead of clients of the state. Our approach should be to trust individual citizens to make informed, discerning choices about their health care and retirement. The aim is not merely to lift our crushing burden of debt. It is to produce citizens who are more independent and self-sufficient.

In all of this our aim should be to create reasonable expectations for the able-bodied, which will allow us to focus more intensive intervention on those in the shadows of life, to those suffering from addiction, mental illness, and physical disability. We saw something similar occur with welfare reform, where money that was being spent on the able-bodied was freed up to assist those in genuine need.

Beneath the back and forth of daily politics, what we are talking about is the link between public policies and personal character, between the laws we pass and the moral attitudes we produce. Our task is to reclaim the animating ideas of America, including social mobility and equality of opportunity, individual responsibility and republican virtue, and to put government policies on the side of and in the service of the cause of sovereign, self-confident citizens. This has always been, and it will always be, the cornerstone of American exceptionalism. It's time we live up to it.