Accessibility links
The Nation: How Oil Impacts Obama's Re-Election Gas prices are rocketing, largely thanks to the ongoing crisis in Libya. Christopher Hayes of The Nation argues that this is the biggest threat to economic recovery — and to President Obama's shot at re-election and wonders why Wall Street is still allowed to aggravate the uncertainty in the market. 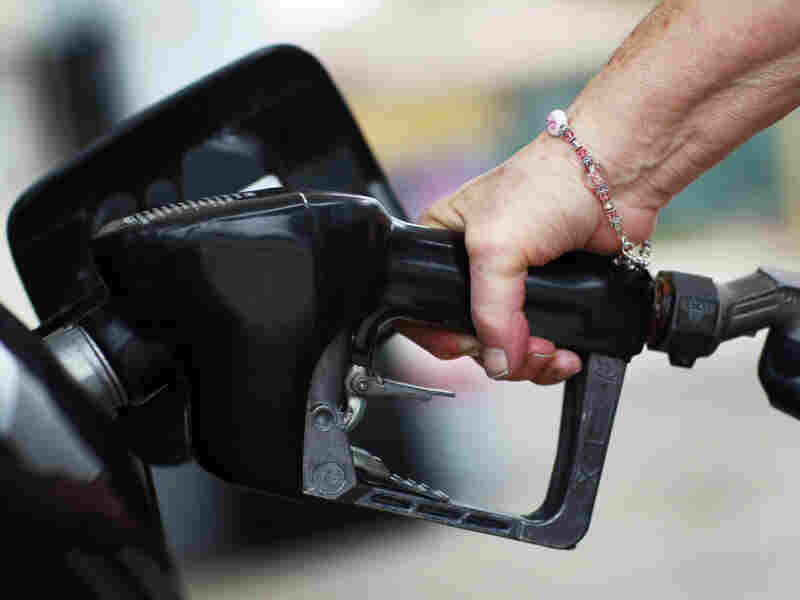 A woman pumps gas at a Ugas station in Miami, Florida.The national average for a gallon of self-serve, regular gas was $3.50 a .33 cent increase from two weeks ago. This was the second largest two-week jump in gas prices ever, largely due to the events unfolding in Libya. Joe Raedle/Getty Images hide caption 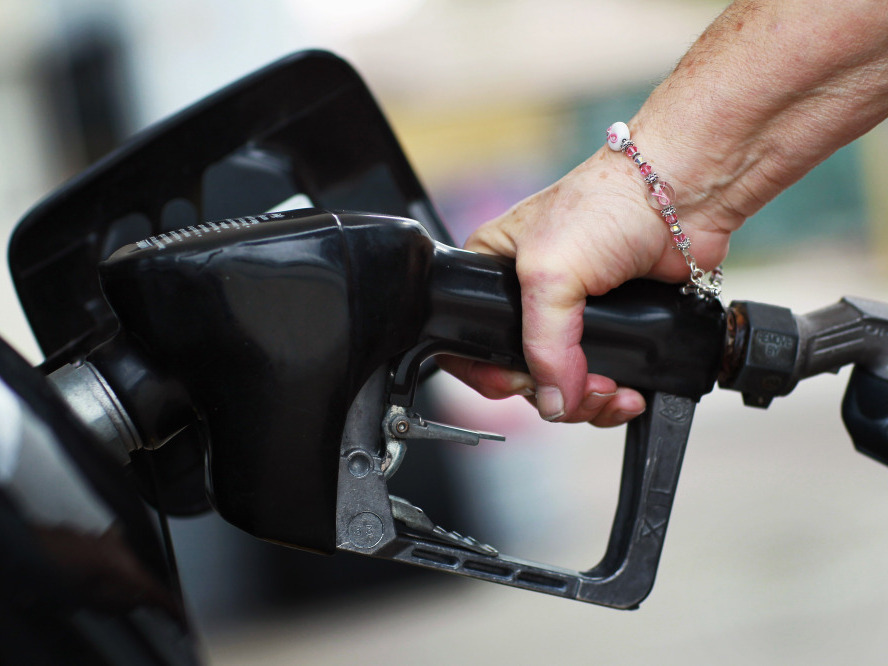 A woman pumps gas at a Ugas station in Miami, Florida.The national average for a gallon of self-serve, regular gas was $3.50 a .33 cent increase from two weeks ago. This was the second largest two-week jump in gas prices ever, largely due to the events unfolding in Libya.

While the Labor Department's announcement last Friday that U.S. employers had created 192,000 new jobs seems to confirm that the American economy is indeed showing signs of life, the adjective most observers have used to describe its recovery is "fragile." The reasons are obvious: unemployment is still staggeringly high, household debt and underwater mortgages continue to put a drag on demand, and impending budget cuts by state and federal government could push unemployment back up and the economy back towards contraction.

But arguably the biggest threat to recovery is the price of oil. If oil prices in particular, and commodities in general, begin to rise, those trends will almost certainly constrain demand and consumer confidence at exactly the moment they are most needed. This week oil traded at $104.42 a barrel, up 7 percent from last week and at its highest since the September 26, 2008, close at $106.89. And we know from recent experience the oil prices (along with all sorts of other commodities) can skyrocket with little warning. Cast your memory back to the summer of 2008, before the financial crisis and in the heat of the presidential campaign. That summer, oil hit $147 a barrel and gas hit above $4 a gallon; airfare went through the roof and nearly every single major carrier came very close to declaring bankruptcy. Food prices shot up as well, with wheat trading up 137 percent year over year in July 2008, and corn 98 percent. Famine and food riots spread throughout the globe.

Though it seems like a distant memory now, for about six weeks during the 2008 presidential campaign, all anyone talked about was the price of gas. John McCain and Hillary Clinton went so far to advocate for a temporary repeal of the gas tax, Congress held hearings and the Senate actually came close to passing legislation to crack down on oil speculation. And lest we forget, it was in this panic over the rising cost of living that the catchphrase "drill baby drill" was born.

So the White House should not only be worried about oil prices and recovery. They should also be worried about the well-established fact that when the price of gas spikes, the country's politics go haywire. FiveThirtyEight's Nate Silver recently showed that high gas prices are correlated with poor incumbent party performance in presidential elections. So not only do rising oil prices present the single greatest substantive policy challenge to a president attempting to cajole the economy into a sustained expansion — it presents the biggest political danger as well.

At first blush you might think that there's not a whole lot the president can do about the price of oil. After all, increase in demand from China and India plus seasonal demand in the United States during peak driving months, combined with the instability in the Middle East, all seem to be pushing the price of oil up and are all outside the White House's control. But that's not the whole story.

In the wake of the price explosion in the summer of 2008, a bubble that extended to all kinds of commodities, including copper and wheat, a number of observers from George Soros to Hedge Fund manager Michael Masters to former Commodities Future Trading Commission staffer and derivatives expert Michael Greenberg concluded that the underlying supply-and-demand fundamentals couldn't account for the sharp rise in prices. In the first six months of 2008, U.S. economic output was declining while global supply was increasing. And even if supply and demand were, over the long run, pushing the price of oil up, that alone couldn't explain the massive volatility in the market. Oil cost $65 per barrel in June 2007, $147 a year later, down to $30 in December 2008 and back up to $72 in June 2009.

The culprits, they concluded, were Wall Street speculators.

Commodities markets involve essentially two kinds of participants: there are so-called "end users" like farmers and airlines that use commodities markets as a form of insurance against future price fluctuations, and then there are speculators — hedge funds, investors, big banks that try to make money by correctly betting on those same price fluctuations. The presence of these speculators isn't in and of itself a bad thing; in fact, they bring liquidity that should, in theory, make the market more efficient. According to an analysis by the House Energy Committee's Subcommittee on Oversight and Investigations, in 2000, physical hedgers, trucking companies, farmers, bakers, made up 63 percent of the crude oil futures markets, with speculators accounting for the rest. By 2008, those proportions had basically flipped.

Of course, the Wall Street banks say there's nothing to see here, but that's hard to believe. It's almost impossible to make sense of 2008's massive commodity price spike without concluding that the speculators played an outsized role. When enough money floods into a booming market, Greenberger says it can "unmoor" the prices of commodities from their underlying supply-and-demand fundamentals. The basic mechanism by which this might happen should be familiar; it's the same principle that drove the housing market bubble or the tech stock boom. When a bunch of people think the price of a stock is going to go up, they rush to buy it so they can realize the imminent gains. Of course, a surge of demand itself pushes the price up and the price cycles upwards until it pops. The difference being, no one puts Pets.com in their cars, trucks and airplanes.

"The most conservative thing that can be said right now [is that] this would be no time to dismiss the role that speculation plays," says Greenberger. "A moderate statement is that speculation is creating volatility that is aggravating the uncertainty in the market. If you start talking to industry people, they're pulling their hair out. American Bakers Association is going bananas. They all believe that the markets are going screwy because of Wall Street." A host of businesses and organizations from Virgin's Richard Branson to Oxfam all make the same case.

One way to attempt to constrain these volatile mini-bubbles is for the Commodities Futures Trading Commission to impose "position limits," essentially limits on the size of the bets that speculators can make. The New Deal-era Commodities Exchange Act gives the CFTC power to curb "excessive speculation," and the just-passed Dodd-Frank bill explicitly calls for the CFTC to promulgate position limits.

Not surprisingly, the big Wall Street banks like Goldman Sachs don't want this, and the two Republican members of the commission don't favor any position limits rules with real teeth. To his great credit, CFTC Chairman Gary Gensler (a former Goldman banker I was quite critical of when nominated to the position) has taken a strong leadership position in advocating strong limits, and Democratic commissioner Bart Chilton has been supportive as well. That leaves the deciding vote in the hands of Democratic Commissioner Michael Dunn, who has expressed misgivings.

Now, it just so happens Dunn's term is up in June and last night MSNBC's Ed Show reported that the White House has begun vetting his replacement. This may seem obscure and technical, but given the precariousness of the recovery and political explosiveness of gas prices, nominating a replacement enthusiastic about reigning in excessive speculation may be the single most important decision the White House makes between now and Election Day.