Accessibility links
Did Egyptian Protesters Die In Vain? Relatives say their main frustration is that there are no investigations — let alone arrests — of those responsible for the killing of protesters during Egypt's revolution. They question whether the price their loved ones paid was worth it.

Egyptians look at a banner that says "Martyrs of the January 25th Revolution." The banner bears pictures of demonstrators who were killed during anti-government protests. Nasser Nasser/AP hide caption

Egyptians look at a banner that says "Martyrs of the January 25th Revolution." The banner bears pictures of demonstrators who were killed during anti-government protests.

Egyptian protesters credit the nearly 400 people killed during the revolution for inspiring them to force President Hosni Mubarak from power, and they vow to keep fighting for democratic reforms and to give the sacrifice meaning.

Egyptian Prime Minister Essam Sharaf assured a crowd during a recent visit to Cairo's Tahrir Square that the blood of the "martyrs" was not spilled in vain.

But relatives of many of the victims are starting to question whether the price their loved ones paid was worth it. In a tiny walk-up apartment several miles from the square, Ahmed Mutwalli Awad says all the flowery words are not being followed up with action.

The shoe salesman's 34-year-old younger brother, Mohammed, was shot in the head Jan. 28 and died six days later. A poster of the dead man with his face superimposed on a crowd of demonstrators hangs on Awad's otherwise bare walls.

Awad says his brother was a hero, but that he will have died in vain if all that comes out of Egypt's revolution is a reshuffling of the Cabinet and continued economic hardship.

At the Cairo office of the Egyptian Organization for Human Rights, other relatives of people killed during the revolution express similar doubts. 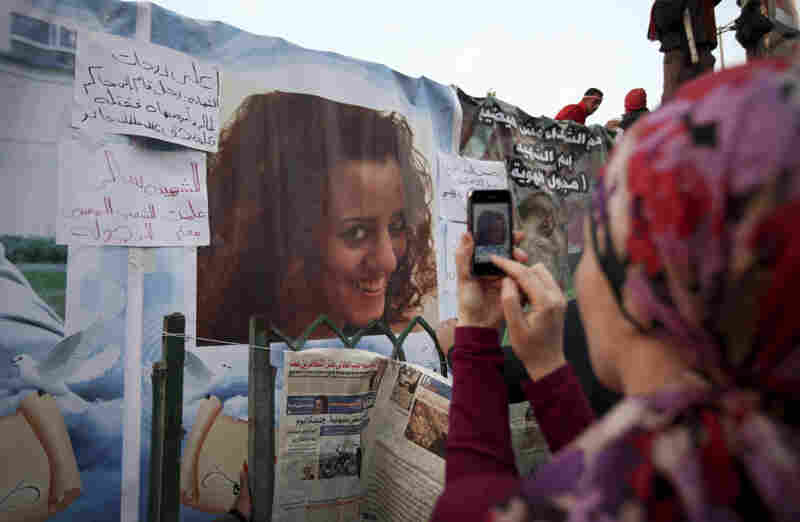 A woman in Cairo's Tahrir Square takes a picture of a poster of Sally Zahran, 23, who was killed in Egypt last month. Tara Todras-Whitehill/AP hide caption 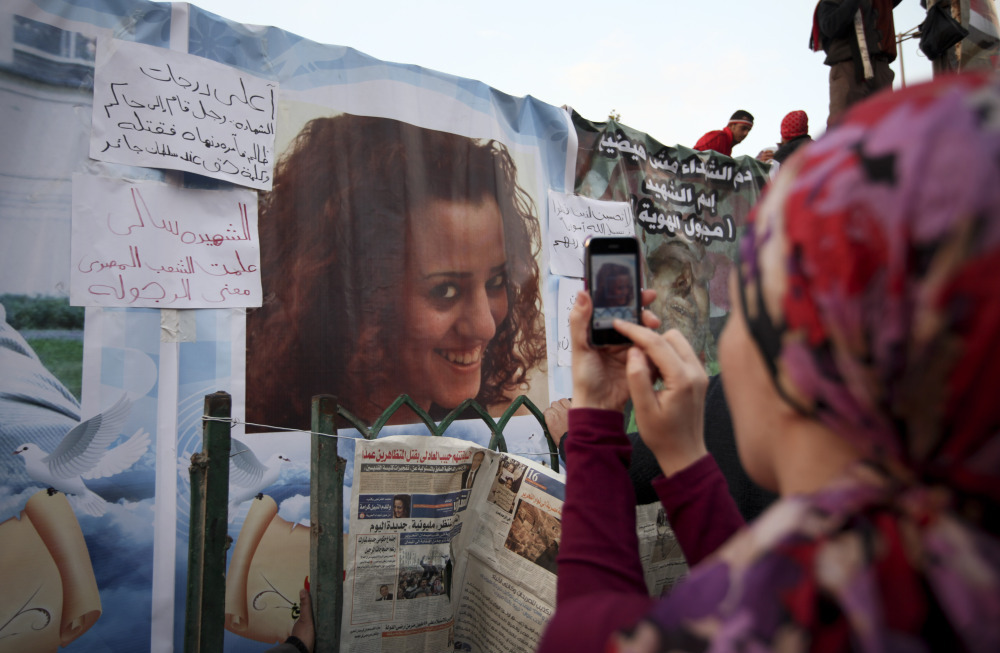 A woman in Cairo's Tahrir Square takes a picture of a poster of Sally Zahran, 23, who was killed in Egypt last month.

The families say their main frustration is that there are no investigations, let alone arrests of those responsible for the killings. Even families of victims who were not involved in the protests say they are getting no help from Egyptian officials.

Mohammed Abdul Aziz's 28-year-old wife was fatally shot in the face while she was hanging laundry on her balcony in a district where there weren't even protests.

Ahmed Ezz el Deen, whose son was shot while they stood on a balcony in the same district, says he believes the police were shooting to try to keep people from going outside and joining the protesters.

Most of the families say they haven't received compensation promised by the government, though Awad says his family did receive a check for about $500. Former Prime Minister Ahmed Shafiq had pledged a monthly pension of $280 to the relatives.

Human-rights groups such as Amnesty International are reporting government reprisals and intimidation toward victims' families to get them to stop trying to find out what happened.

None of the relatives interviewed by NPR said they felt pressured, other than one man who said a Ministry of Interior investigator told him he could face problems after he sent information about his brother's death to Human Rights Watch.

Lawyer Heba Mohamed of the Egyptian Organization for Human Rights says her office has filed complaints on behalf of 200 of the families to bring pressure on the government. She says she believes the pressure is working.

"It's promising because the prosecution is working with us to collect material and evidence against the security forces," she says, adding that evidence will help in the trial of former Interior Minister Habib el-Adly, who is accused of ordering the fatal violence.