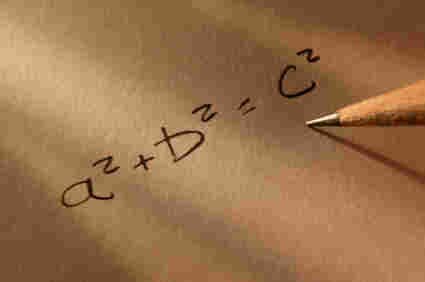 a2 + b2 = c2. Remember that from high school math class? That's the Pythagorean theorem, which shows that in a right triangle, where the shorter legs are a and b, the sum of their squares is equal to the square of the longest leg, the hypotenuse, c.

But for husband and wife mathematics team Robert and Ellen Kaplan, there's much more to this equation. In their new book Hidden Harmonies, they write that the Pythagorean theorem is an ancient oak in the landscape of thought.

"It's the foundation of all our navigation in and beyond the world," Robert Kaplan tells NPR's Robert Siegel. "It lets us know that we live on a flat surface, relatively speaking. It allows us to send rockets to the moon and beyond them." 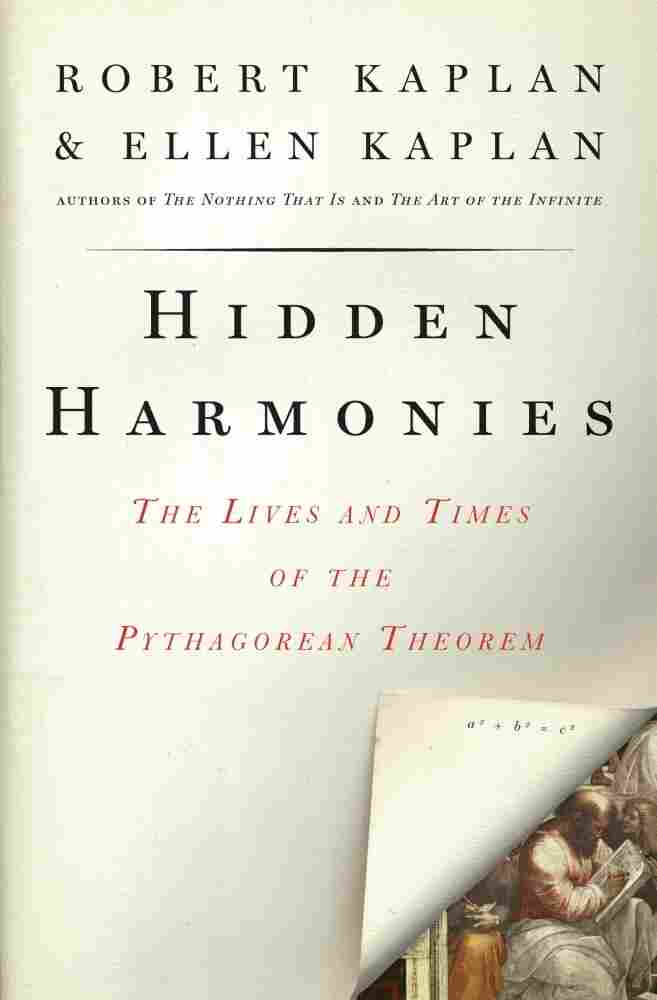 Ellen Kaplan says she remembers memorizing the theorem in school — but that it wasn't until much later that she began to truly appreciate its elegance. "To find that there was a beautiful logic behind it, to find that it spread to all sorts of different realms, not only in mathematics, was just a revelation in the writing of the book," she says.

Another surprising fact about the Pythagorean theorem — it wasn't really discovered by Pythagoras. "Pythagoras was a shaman," Robert Kaplan explains. In the sixth century B.C., Pythagoras set up a colony in the southern part of Italy. It was there that his followers came up with the formula, "and, of course, Pythagoras took or was given credit for it."

Euclid, the Greek mathematician, also played a central role in the formula, explains Ellen Kaplan. "He is the person who was actually trying to take all of these handymen's 3-4-5 rules and other observed relationships and not only make them clear, but to prove that they're true — which is something that no one had done before with mathematics."

Though the 3-4-5 rule is the best known, "there are many, many, infinitely many combinations of numbers such that a2 + b2 = c2," Robert Kaplan says. But it gets more complicated. Kaplan explains that a member of the Pythagorean community "showed that if you take a right triangle whose legs are 1 and 1, the hypotenuse of it by the theorem that this community had come up with would not itself be a whole number, or a ratio of whole numbers." It would be an irrational number.

According to dramatic (though unproven) legend, Kaplan says, the Pythagoreans "thanked him so much for his proof, asked him to step to the edge of the nearest cliff — and off he went." 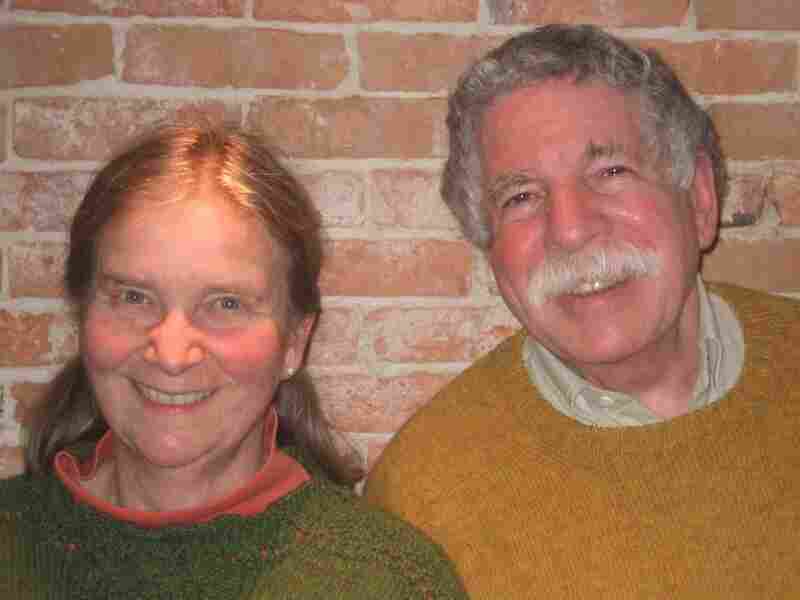 In 1994, mathematicians Ellen and Robert Kaplan founded The Math Circle, a program of collaborative, problem-solving courses. They are also the authors of The Art of the Infinite and Out of the Labyrinth. Zen Chu/Bloomsbury hide caption 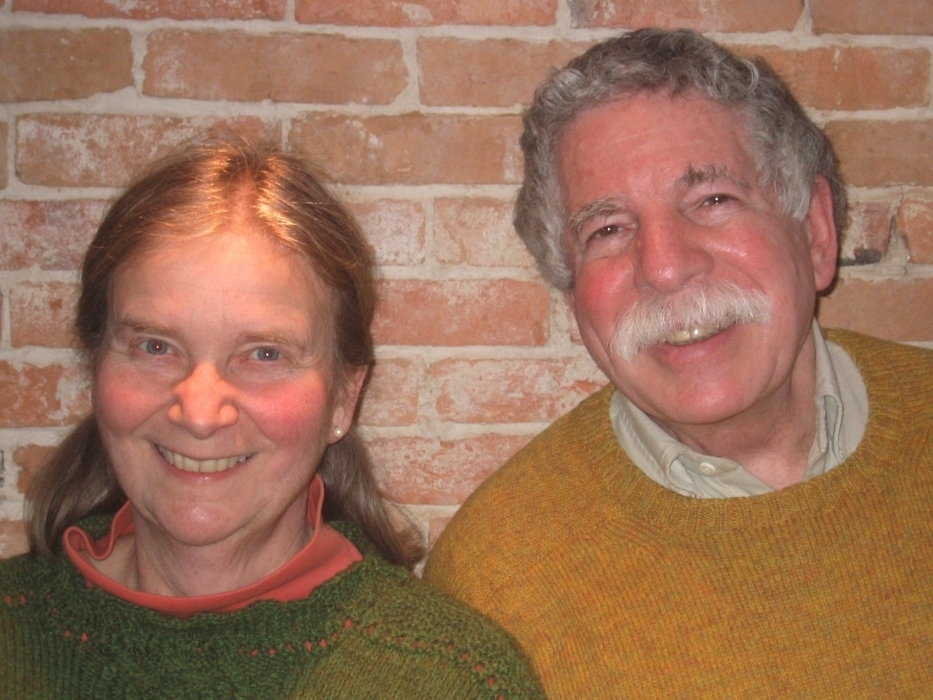 In 1994, mathematicians Ellen and Robert Kaplan founded The Math Circle, a program of collaborative, problem-solving courses. They are also the authors of The Art of the Infinite and Out of the Labyrinth.

Now, 2,500 years after Pythagoras' time, it's a lot easier to determine the length of a triangle side, or the degree of an angle. "This is one of the tragic effects of deciding that calculus is the pons asinorum," says Ellen Kaplan (that translates to "the bridge of asses" or "the bridge of fools," and it refers to one of Euclid's basic math problems — a really tough one — a test that would frustrate and stymie the inexperienced and allow only the skilled to continue into the more advanced mathematical proofs.) "People have said, 'Oh, there's no point in geometry because you can just get some artificial device that will tell you these things — lengths are the same or the angles are the same.'"

And as for proofs, why prove something that's already been proven before? "Young mathematicians are being brought up in a style of thinking which is purely memorization of a practical definition," Ellen Kaplan says.

The Kaplans would like to see more do-it-yourself discovery in math education. "Ellen and I began our math circles at Harvard in 1994 to bring young math students back to the way of being discoverers and inventors themselves," Robert Kaplan explains. "In our classes, we just pose a problem and let them go to work on it together — geometry, algebra, calculus, it's all there to be played with. And as Plato says, because we're the playthings of the gods, playing is the most serious of our activities."

The deeper in time the Golden Age is set, the more romantically it gleams. Some four thousand years ago, between the Tigris and Euphrates rivers, the Old Akkadians and then the Old Babylonians developed a way of life that bustled with pride and commerce. They did things with numbers and shapes of a finesse and intricacy that will take your mind's breath away. These people were the contemporaries of your great-great-....[ some 150 of these]-great grandparents; they stood two-thirds as tall and lived half as long as we; had a hundredth of our comforts and none of our safeguards. They had no Twitter, no dentists, no Big Macs – but their sense of humor puts them just down the street from us.

Father: "Where did you go?"

Father: "Then why are you late?"

This snatch of dialogue has been deciphered from an ancient cuneiform tablet, startlingly small, and indented with the neat bird-tracks of wedges that read as easily to them as our letters do to us.

The ancestors of these people had kept their accounts with clay tokens through the four thousand preceding years, but as a temple-based bureaucracy developed, the growing complexity of life, and of the book-keeping which recorded it, led to symbols for these tokens, and signs for 1, 10 and 60, which they iterated to make the other numbers. Once again we recognize ourselves in them: abstraction from things to names, and names to numbers, is the way we mark our turf.

An organic interplay between mathematics and administration continued through most of the third millennium B.C., developing into a 60-based system of whole numbers and fractions (60 has enough whole number divisors to make calculations easier than in our base 10 system). Then something important seems to have happened around 2600, when a class of scribes emerged. For them — perhaps in the slack periods when goods were not being brought in — writing broadened from making inventories to recording epics, hymns and proverbs, and mathematics from the practical to the precious. We set our young mathematicians difficult theorems to prove; they gave their rising scribes horrendously long calculations to carry out, with as little connection to reality as were the highly artificed poems that Mandarin officials were required to write in ancient China. Everything changed again near 2300, with the invasion of an Akkadian-speaking dynasty. Sumerian stiffened into an administrative language only (playing the ennobling role that Latin once did for us), and new sorts of mathematical problems arose, centering on area. In the blink of an eye from our perspective — two hundred years for them — this dynasty fell, and a neo-Sumerian state took its place in 2112. That 60-base number system now began to work itself out on the backs of the people and the brains of the scribes. Our lawyers punch in a client's time every fifteen minutes, but these scribes, acting now as overseers, had to keep track of their laborers through a day of ten-minute quotas.

This state in turn collapsed – probably under its own administrative weight — within a century, and the four-hundred year glory of the Old Babylonian period began, epitomized by the famous law-giver, Hammurabi. This was a time of high scribal culture, featuring ideals we recognize as humanistic, and calculations whose balance of cleverness and painstaking tedium we gasp at.

A Hittite raid around 1600, then an overwhelming invasion by warrior Kassites, suddenly brought down a curtain a thousand years thick, hiding away almost all traces of this Hobbit-like people, whose glass-bead game culture and animated bureaucracy we see far away down the wrong end of a telescope. Our story turns into history.

Both are deceptive. This narrative, made to appear seamless, is actually stitched together from so much of so little — as far as the mathematics goes, mountains of clay tablets recording hardly more than school exercises or teachers' trots. The context of the society at large, and of the scribal community within it, is just guesswork, attempts at rational reconstruction baffled by the distortions of historical foreshortening: events spread over vast stretches of time and space are collapsed to apercus, and anything is taken to stand for everything. The conclusion, for example, that a thuggish regime shut down intellectual pursuits for a millennium, might be skewed by the economics of excavation: with funding scarce, who would dig up schoolrooms, despite their possibly valuable evidence of evolving thought, when there are palaces waiting to emerge?

We're not only sitting at the far end in a game some call Chinese Whispers and others Telephone, but those in front of us have each their own agendas and personalities to promote, while they indulge in the peculiar practice of letting their civility be seen as no more than veneer. Perhaps they would be less vituperative, and hence more enlightening, were they a more expansive community (squabbling seems to breed in close quarters), or had they evidence rather than speculation to go on, and a logic founded on 'only if' rather than 'if only'. As it is, the hum of knives being whetted may serve the ends of mean fun, but can be distracting. From a recent scholarly work:

The pretentious and polemical attempt by Robson in HM 28 (2001) to find an alternative explanation of the table on Plimpton 322 is so confused and misleading that it should be completely disregarded, with the exception of the improved reading of the word I-il-lu-ú in the second line of the heading over the first preserved column, and the dating of the text... Cf the verdict of Muroi, HSJ 12 (2003), note 4: "The reader should carefully read this paper written in a non-scientific style, because there are some inaccurate descriptions of Babylonian mathematics and several mistakes in Figure 1, Tables, and transliterations." A briefer and less polemical, but still pointless, version of the same story can be found in Robson, AMM 109 (2002)

Odd that archeology is often still thought of as one of the humanities.

Our aim at this point is to see what traces or precursors of the Pythagorean Theorem we can find in Mesopotamia; and if there are any, whether they then migrated somehow to Egypt or even directly to Greece. We recognize that the ambiguity of the evidence and the need to pick at the scholarly scabs over it will make our telling hyper-modern: one of those "design it yourself" dramas, constructed not only by the participants but by its writers and readers as well. Yet some Guido or, collegially, Guidos, did come up with the stages of this insight, and then its proof; and narrowing down to a local habitation if not a name is surely less profound a task than was theirs. 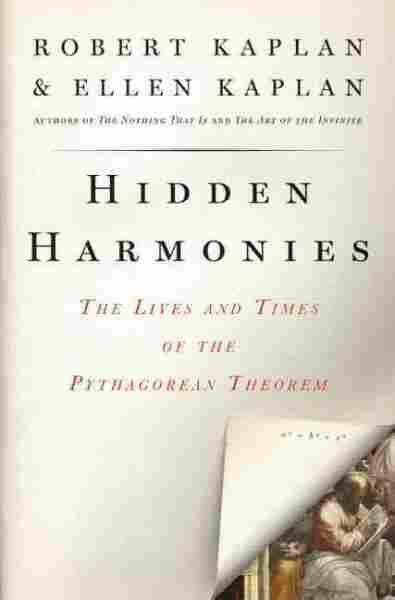 The Lives and Times of the Pythagorean Theorem

by Robert Kaplan and Ellen Kaplan