Accessibility links
Heroic Acts To Protect The Word 'Hero' In the past, the word generally was reserved for those who voluntarily risked their lives trying to save the life of another. Today, "hero" is often used to describe people who may simply be good role models. 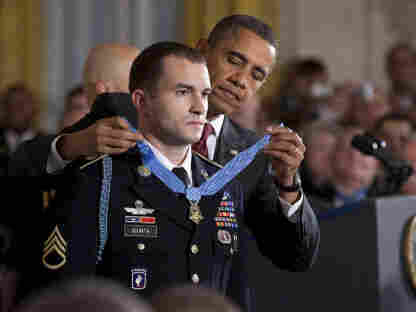 A True Hero? President Obama presents the Medal of Honor to Staff Sgt. Salvatore Giunta in the East Room of the White House last November. Asked if he's a hero, Giunta said, "I am only mediocre. I'm average, and by no means did I do anything that anyone else wouldn't have done in that situation." Courtesy of the White House hide caption

Has the word "hero" been so overused that it's losing its meaning?

These three recent examples show how people are employing the term. You decide if the usage is appropriate.

On CBS News, Melissa Castellanos tells viewers that "the Super Senior who bravely fought off jewel thieves with her handbag has been unmasked. She's [a] 71-year-old grandmother ... and she's being called a hero by her community."

On NBC's Today Show, Ann Curry says: "An elderly Memphis woman ordered a Domino's [pizza] every day for the past three years. But when her calls suddenly stopped, her regular delivery driver became concerned and took action, and now that delivery driver is being hailed a hero for saving that elderly woman's life."

According to CNN, Philadelphia Eagles quarterback Michael Vick, who spent time in prison for animal abuse, "is being honored as a hero next month at a black-tie event in Norfolk, Va., for his 'resilience in overcoming obstacles' and becoming 'a true example of life success for all to emulate,' according to event organizers."

Are these people heroes?

More Than A Role Model

Though they may be exceptional people, they might not fit the definition of hero as determined by the Pittsburgh-based Carnegie Hero Fund Commission. "Since our establishment in 1904," says Executive Director Walter F. Rutkowski, "the commission has always applied a narrow definition — or more appropriately, a classic definition — to 'hero': someone who voluntarily leaves a point of safety to assume life risk to save or attempt to save the life of another."

The Pittsburgh-based Carnegie Hero Fund Commission defines a hero as "someone who voluntarily leaves a point of safety to assume life risk to save or attempt to save the life of another."

But that definition is often broadened considerably. Among the people considered heroes today are athletes and Hollywood celebrities.

What's your definition of a hero? Tell us in the comments section below.

Other people who use the word "hero" may do so in different contexts, Rutkowski says, "but since we do not have exclusive rights to the word, it is counterproductive to cringe on hearing same. We know, and would prefer to see, that 'role model' or 'positive role model' is the more appropriate term for use in many of these contexts."

People do broaden the definition — and the list. Former Secretary of Education William Bennett, in his 1997 work The Children's Book of Heroes, includes exemplary figures, such as Abraham Lincoln, Jackie Robinson and Mother Teresa.

Retired shop teacher Don Jones, who maintains the USA Hero website, defines hero as "someone who acts to help another with no thought for herself or himself or someone who is admired for achievements or noble qualities." His roster includes poet Emily Dickinson, and actors Morgan Freeman and Jodie Foster.

Today we sometimes toss the word "hero" around without thinking much about it. We use it to name TV shows. We speak of a Hollywood celebrity as our childhood hero. Alan M. Webber, a founding editor of Fast Company magazine, offers a reason that we use the term so freely.

"I suspect that if the American public's nerves weren't quite so badly frayed by all the over-attention to bad behavior, if we weren't all addicted to a culture of celebrity and extreme amplification of every news story, in other words, if the whole country were only a little bit more sane," Webber writes on The Washington Post website, "then we'd have a more modulated reaction to most events, the good, the bad and the ugly. And we'd reserve the word 'hero' ... for actions and circumstances that actually merit their application."

So maybe we need a new word for that narrow definition of heroism. Truehero, perhaps. Or epichero.

U.S. Army Gen. Norman Schwarzkopf once said that "it doesn't take a hero to order men into battle. It takes a hero to be one of those men who goes into battle."

And the German writer Johann Wolfgang von Goethe said: "The hero draws inspiration from the virtue of his ancestors."

Detroit May Need A Hero, But Is It Really Robocop?

'I'm Not A Hero,' Says Guard Who Stopped Gunman At School Board Meeting

Our ancestral heroes first appeared in the oral storytelling tradition. They were superhumans, almost gods, and the actions they took were mostly in the best interest of humankind. The dictionary traces the word's meaning from "a being of godlike prowess and beneficence" to "a warrior-chieftain of special strength, courage or ability" during the Homeric period of ancient Greece.

By the Encyclopaedia Britannica of 1911, the word had come to be applied "generally to all who were distinguished from their fellows by superior moral, physical or intellectual qualities."

Around that time, Pittsburgh steel magnate Andrew Carnegie set aside $5 million to recognize ordinary folks who perform extraordinary feats of heroism. In the ensuing years his Carnegie Hero Fund Commission has granted more than 9,400 awards — and nearly $33 million — to people who have risked their lives to save others.

The extraordinary exploits include pulling someone from a burning building, standing between someone and an attacking animal, rescuing a drowning swimmer, thwarting an assault on a citizen and other facing-death-to-save-a-life acts. About a fifth of the awards have been granted posthumously.

The 21-member commission is constantly receiving nominations for the next round of heroes. Another batch — of up to 23 heroes — is scheduled to be recognized on April 7.

What makes Rutkowski cringe is when "victims" are viewed as heroes, "such as when a threat is put upon a person who then combats it to save him/herself and while doing so saves others," he says.

As an example, Rutkowski points to US Airways Capt. Chesley Sullenberger, of Hudson River-landing fame. In a recent edition of the commission's newsletter, the group's president, Mark Laskow, wrote an essay about Sullenberger. In the article, Laskow quotes an interviewer from the Smithsonian Institution who asks Sullenberger, "What is your definition of a hero?"

Sullenberger replies: "My wife actually looked it up in the dictionary. We decided between ourselves that it describes someone who chooses to put himself at risk to save another." 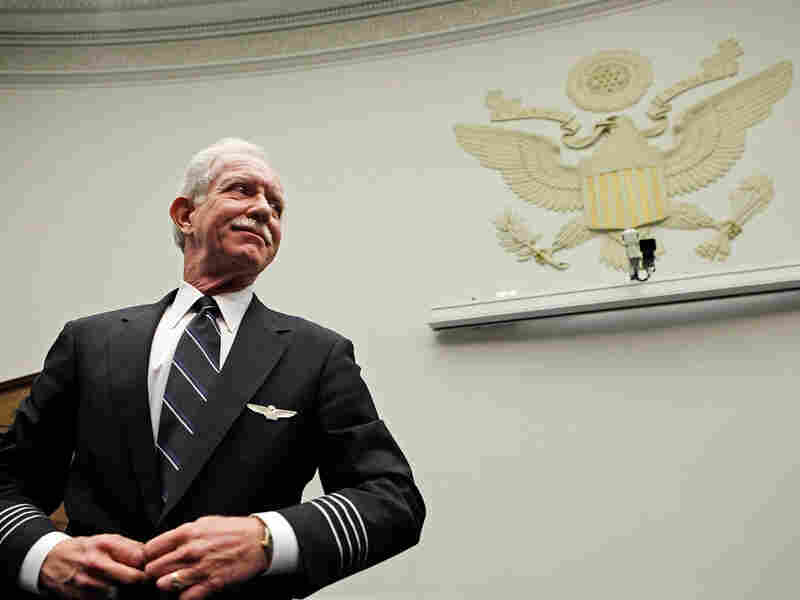 US Airways pilot Chesley Sullenberger was hailed a hero by many after landing his disabled plane in the Hudson River. He, himself, though, says his actions don't meet the threshold of heroism. "Sometimes in our culture we overuse the word," he said, "and by overusing it we diminish it." Chip Somodevilla/Getty Images hide caption

He continues: "That didn't quite fit my situation, which was thrust upon me suddenly. Certainly, my crew and I were up to the task. But I'm not sure it quite crosses the threshold of heroism. I think the idea of a hero is important. But sometimes in our culture we overuse the word, and by overusing it we diminish it.'

When the engines stopped on US Airways Flight 1549 in January 2009, Laskow writes, "Capt. Sullenberger was not in a place of safety. On the contrary, he was in the same peril as the passengers whose lives he saved with his piloting skill. He did not have the opportunity to make a moral choice to take on the risk — it 'was thrust upon' him. I have no doubt that if he did have such a choice, he would not have hesitated to place himself in danger to save his passengers. That just wasn't the actual situation in which he found himself."

In addition to possessing fine piloting and philosophical skills, Laskow writes, Sullenberger "is admirably modest and self-aware. In the midst of continuing, well-earned acclaim for his cool competency, he took the measure of his act and demurred from the title 'hero.' "

And, in a broader sense of the word, that could be called heroic.