Accessibility links
Muslim Americans Question Scrutiny At Border Border agents are trying to strike a delicate balance. As they see it, agents have about 45 seconds to one minute to decide whether someone might be a threat. The concern is that those quick assessments often seem driven by stereotypes. Recently that has become a common refrain. 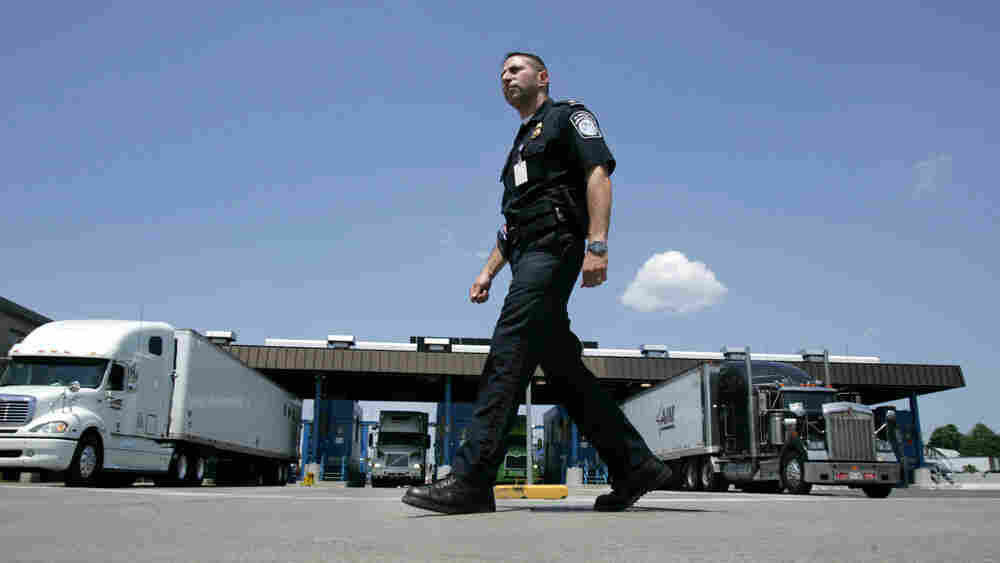 Rep. Peter King (R-NY) opens hearings Thursday on the radicalization of Muslims in America. NPR takes a look at what it is like for Muslim Americans with valid U.S. passports to cross the border into the country. Border agents are asking them about their religion, and where they pray and how often — all of which might be a violation of the First Amendment.

Kathy Jamil, the principal of an Islamic School in Buffalo, N.Y., was born in the U.S. and is Muslim.

She wears a headscarf. Because of where she lives, just a 10-minute drive from the Canadian border, she goes back and forth between the U.S. and Canada frequently. Lately, that's meant immigration officials peppering her with questions.

She offered to show what happens, so we went to Niagara Falls and drove back across the border between Canada and New York at the Rainbow Bridge. An agent from Customs and Border Protection was sitting in what looked like a little toll booth. He greeted us, took our American passports and asked if we are both from the U.S. Both Jamil and I were wearing headscarves. We nodded.

He asked why we'd been in Canada. "I work at a school and she came to do some work and she's visiting so I figured I would take her over," Jamil told him.

I had come to Buffalo to work on a story about a notorious murder that involved two local Muslims: Mo Hassan, the owner of a Muslim television station, had beheaded his wife. It had been the talk of Buffalo. The CBP agent asked if Jamil was related to the murderer. (Hassan was sentenced Wednesday to 25 years to life in prison).

"I work with a domestic violence organization so we were talking about that," she explained. He handed us back our passports and let us through the border. As we drove away, Jamil said she thought the question about being related to the murderer crossed the line.

Border agents are trying to strike a delicate balance. Their job is to stop bad people or bad things from getting into this country. As they see it, agents have about 45 seconds to one minute to decide whether someone might be a threat. The concern is that those quick assessments often seem driven by stereotypes. Recently that has become a common refrain.

Consider the case of Samer Shehata, professor of Middle Eastern studies at Georgetown University. He ran into trouble at customs this past January when he was returning to the U.S. with his wife and their 4-year-old son. They had gone on vacation to Cancun, Mexico. "After she looked at our passports and did her computer work, she asked us to follow her," Shehata said. "This was something I had not experienced before."

Shehata and his family were taken into a secondary screening room. Forty minutes ticked by. Shehata began to worry about missing their connecting flight. He told one of the guards as much and a few minutes afterward he was summoned to speak to the supervisor of homeland security at Fort Lauderdale (Fla.) airport. Shehata said what followed wasn't a question-and-answer session as much as it was an interrogation.

"He asked me about my parents, what I studied in college, where I went to college, my sisters' names ..." Shehata said. "Then I suggested he look up my resume on the Georgetown University website because all the information he wanted was there."

Then the interview took a bizarre turn. "After he asked me what I teach at Georgetown University and my response was Middle Eastern politics, he asked, 'Who's going to win?' " Shehata said.

Who's going to win? The Muslims or the Americans? The Israelis or the Palestinians? Shehata said he wasn't sure what the question meant, but he felt he had no choice but to answer it. Finally, after nearly two hours, Shehata got his U.S. passport back. "At the end of the interview, the agent told me the reason I was summoned, or taken for these extra security measures, was because of my 'location of birth.' "

He paused. "I was born in Egypt, and I think it was on that basis that they decided to interrogate me."

Thomas Winkowski, the assistant commissioner at U.S. Customs and Border Protection, is in charge of field operations for the agency. I asked him if origin of birth was enough of a reason to pull someone out of the immigration line. "Most likely, just origin of birth without other factors, probably not," he said. "The line we don't cross is that we are improperly taking into consideration individuals' race and religion and the like. To me that's the boundary, that's the line."

CBP agents say their job depends on flexibility, on trusting their gut. They ask questions, and a hint of deception gives them license to drill down. The question is, when does that discretion lead to abuse?

"The difference here is between routine and nonroutine questions," said Hina Shemsi, the executive director of the ACLU's National Security Project. She says the ACLU regularly receives complaints from Muslims who say they are asked inappropriate questions, simply because of their religion.

"We all agree that the government has the obligation to protect us and protect the borders and has the right to question people about their identity, to verify their citizenship and their legal status," she said. What the government can't do, she says, is ask about religion absent suspicion of wrongdoing. She says religious freedom is protected by the First Amendment.

Lawrence Ho was asked about his religion anyway. Ho, a resident of New Jersey, works in Edgewater as an operations manager for a shipping company. He is an ethnic Chinese and has been Muslim for five years. He has a Fu Manchu beard and is dressed in jeans and a hoodie.

Agents stopped him at the border two years ago, at the same bridge near Niagara Falls that Jamil and I had crossed. He said the agents started with routine questions "and then out of nowhere they asked me, when did you convert," he said. "I was taken aback because that had nothing to do with the reason why I felt I was there. I don't really have a large beard; I don't dress in typical Islamic garb."

It wasn't just the delay at the border that bothered Ho. There was a comment he found particularly off-putting.

One of the agents kept hitting the button on the key fob that made the car chirp and flash its headlights — the feature that helps you find a car in a parking lot.

"When the Customs and Border Protection guy walked in, another agent said, 'Why do you keep hitting that button?' And he said, 'Just to see if it will blow up,' " Ho said.

I asked Winkowski whether a joke about a bomb was an indication that the guidelines at the border allowed too much discretion. "My understanding is that's an allegation," Winkowski said. "If that allegation is true, I believe that's inappropriate. I understand the sensitivities here and I understand that at times we get into some areas that are very, very sensitive and I can appreciate how they feel."

"They," being Muslims. Shehata of Georgetown explained how he felt: "For the first time in my life, I felt my status in this country was tenuous, even though I have lived here for decades — ever since I was 5 or 6 years old," he said.