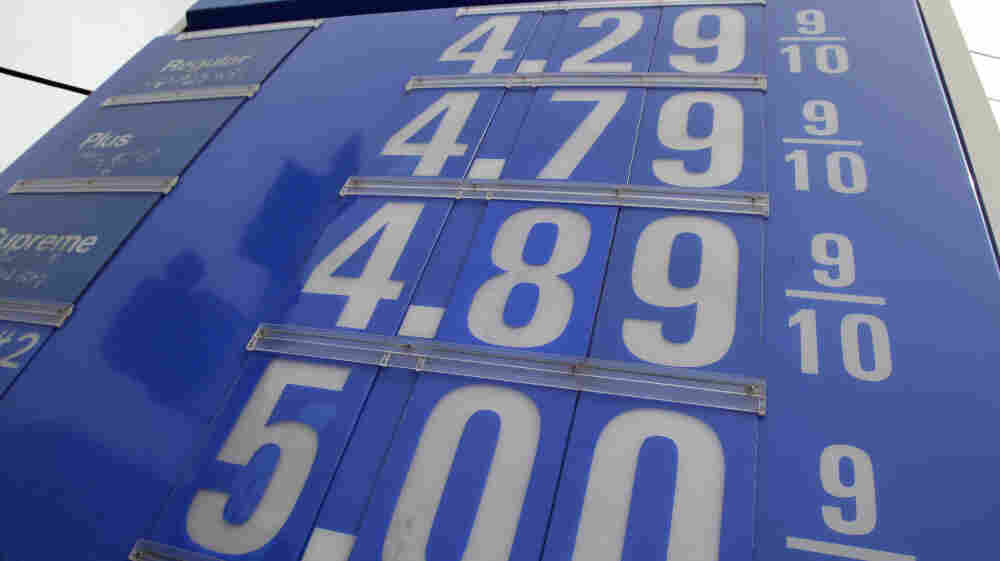 A $5 per gallon price is posted at a gas station in Belmont, Calif., on Wednesday. Paul Sakuma/AP hide caption

The average price of gasoline across the country has topped $3.50, up 14 cents from a week ago and 77 cents higher than this time last year.

As pump prices rise, so does the chorus of criticism from Republicans, who accuse the Obama administration of deliberately curtailing U.S. oil production.

"What about domestic supply?" asked Sen. David Vitter (R-LA) this week. "What about the Gulf of Mexico? What about all of our other vast energy resources that we are taking off the table and shutting down?"

Rep. Doc Hastings (R-WA), who is chairman of the House Natural Resources Committee, has cataloged ways he says the administration has frustrated oil production, from suspended drilling leases to increased red tape. House Speaker John Boehner (R-OH) posted highlights of the list on his website.

"Since this administration has taken over, they have done everything to block energy development in this country," Hastings said.

Mississippi Gov. Haley Barbour, who may challenge the president next year, suggested that Obama is quietly cheering for even higher prices at the pump.

"The Obama energy policy to me seems very clear. It's to increase the cost of energy so Americans will use less of it," Barbour said at a conference organized by the Wall Street Journal. "When you shut in the Gulf of Mexico, and American domestic oil production goes down, to me that is bad policy for our country."

But White House spokesman Jay Carney said there's one problem with this line of argument: Domestic oil production last year rose to its highest level since 2003.

According to the federal government's Energy Information Administration, U.S. oil production jumped nearly 3 percent last year, while oil imports fell. While the administration did suspend some Western drilling leases near national parks early on, the administration argues that oil producers still have 41 million acres in which to drill.

"Where it makes sense to lease, we're leasing with abandon as we work closely with the oil and gas industry," said Deputy Interior Secretary David Hayes. "And the production numbers are demonstrating that."

Even in the Gulf of Mexico, Hayes said, oil production has barely suffered, though drilling of new wells was halted for months after last year's Deepwater Horizon spill.

To be sure, the effects of that Gulf drilling moratorium may show up in future years, as older wells dry up and fewer new ones take their place. Credit for the increase in onshore production probably belongs less to any administration policy than to advanced drilling techniques, and the higher oil prices that make them worthwhile.

The last big spike in oil prices came during the 2008 presidential campaign. Back then, gas prices topped $4 a gallon, and "Drill, Baby, Drill" became a popular rallying cry for Republican John McCain and his running mate, Sarah Palin.

Candidate Obama argued that with just 3 percent of the world's oil reserves, there's no way the U.S. could drill its way to energy independence. Nevertheless, the administration says it has actively pursued all forms of energy production, including fossil fuels and alternatives. The president has also pushed for greater fuel efficiency, which could come in handy this summer, when gas prices are forecast to go even higher.