Accessibility links
The Nation: 'Shame, Shame' On Wisconsin Senate On Wednesday night, the Wisconsin voted on Governor Scott Walker's controversial budget repair bill, approving the proposal without the Senate's missing Democrats. John Nichols of The Nation argues that the move was completely lawless, and that Republicans shouldn't expect protesters to back down. 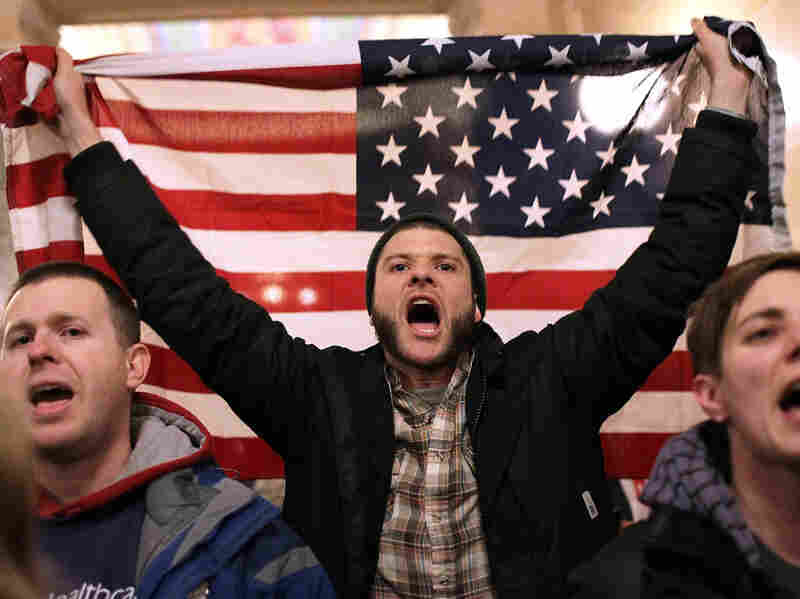 A protester shouts as he holds an American flag after storming the Wisconsin State Capitol on Tuesday. The Wisconsin Republican Senators voted to curb collective bargaining rights for public union workers in a surprise vote with none of the missing Democrats present. Justin Sullivan/Getty Images hide caption 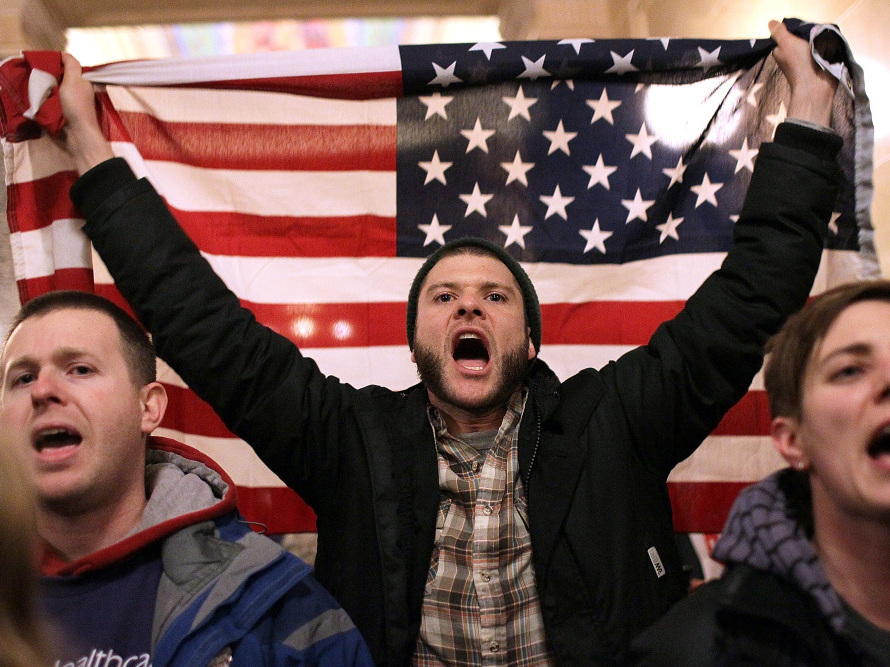 A protester shouts as he holds an American flag after storming the Wisconsin State Capitol on Tuesday. The Wisconsin Republican Senators voted to curb collective bargaining rights for public union workers in a surprise vote with none of the missing Democrats present.

Read Another Opinion On Wisconsin's Senate

Wisconsin State Representative Mark Pocan, the former co-chair of the legislature's powerful Joint Finance Committee, says he is starting to feel as if he lives in a "third world junta."

Wisconsin State Senator Bob Jauch, a senior Democrat, says that what he is witnessing feels like "a coup."

Marty Beil, the head of the AFSCME Council 24, the state's largest public employee union, said Wisconsin had been turned into "a banana republic."

And thousands of Wisconsinites, men and women, adults and their children, public employees and private-sector workers, have poured into the state Capitol in Madison, shouting: "Shame! Shame! Shame!"

At the close of one of the most remarkable days in American political history, a state once regarded as among the most enlightened and progressive in the nation finds itself ruled by rouge Republican operatives whose disregard for rules — and the popular will — is so extreme that the longest serving legislator in the nation, Wisconsin State Senator Fred Risser, a Madison Democrat, says: "They have not just bent the law. They have broken it."

Risser is right. After weeks of intense debate inside and outside the Capitol, and at a point when most Wisconsinites thought a compromise was in the offering, Republican legislative leaders suddenly announced that they would pass the most draconian components of Governor Scott Walker's budget repair bill — including a move to strip public employees of their collective bargaining rights.

They could not do so passing the bill as Walker proposed it. Because Walker's measure was a budget bill, that would have required a quorum and no quorum could be achieved because of the absence of 14 Democratic senators — who fled to Illinois in order to establish a negotiating position to change the bill.

So the Republican stripped out the supposedly "non-economic" components of the bill, including the assault on collective bargaining, and passed them in a form that did not require the quorum.

They did so without hearings, without debate and without following the state's open meetings laws.

They did so in less than two hours, without even notifying key Democrats.

They did so over the objections of Assembly Minority Leader Peter Barca, a Kenosha Democrat, who repeatedly explained to members of the legislative Conference Committee that moved the bill to passage: "Mr. Chairman, this is a violation of law."

But the Republicans did not listen, or care. They literally walked out of the meeting as they spoke.

Minutes later, the Senate passed the bill by an 18-1 margin. No Democrats were present and only state Sen. Dale Schultz, R-Richland Center, voted "no."

It was a shameful spectacle, and it is all but certain to be repeated Thursday in the state Assembly — even as Barca and his Democratic colleagues put up one final fight for workers rights and the rule of law.

As the Senate voted Wednesday night, cries of "Shame! Shame! Shame!" were audible in the chamber.

The people, by the hundreds, and then the thousands, had raced to the Capitol to let their representatives know what all the polls have confirmed: this legislation is opposed by the overwhelming majority of Wisconsinites. Its supporters — billionaire campaign contributors and Washington-based think tanks — may have won a round Wednesday night.

But it was a surprise attack rather than an honest win.

And it will inspire an appropriate response: Protests now, and the recall and removal of Republican senators in short order.

Some of the Republicans may think that "cooler heads will prevail." They are wrong. The cool heads, the calm and rational Wisconsinites, will be busy in coming days: collecting signatures of recall petitions.