Accessibility links
Spouse's Dementia Leaves Poet A 'Strange Relation' When poet Rachel Hadas' husband George began showing signs of early-onset dementia, literature became her life line. Not to soothe and console, but to make her sit up, pay attention and re-evaluate her experiences. 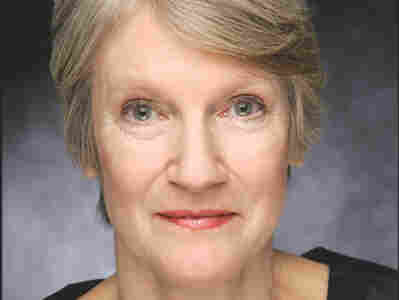 When her husband was diagnosed with early-onset dementia, author and poet Rachel Hadas turned to literature. "Poetry has always been a way of coping for me," she says. James Kriegsmann hide caption

After 30 years of marriage, poet Rachel Hadas gradually found her husband George slipping into uncharacteristic silences. George, a professor of music at Columbia University, was soon diagnosed with early-onset dementia at the age of 61.

Before 2004, Hadas didn't have a name for George's discomfiting behavior. But her subconscious knew something was wrong, she says — she had described it in a poem, "In Your Chair," at least two years before. In the poem, based on a dream, her husband sits silent in a chair, as she scurries around, "bringing the world to him," she tells NPR's Neal Conan.

"How amazing, that I knew all that?", she says. "My poems have always known much more than I know." She had forgotten she'd ever written the poem. "It didn't seem important," she says, but "then reading it again, I was struck with this kind of dread ... my subconscious appears to be smarter and much braver than the rest of me." 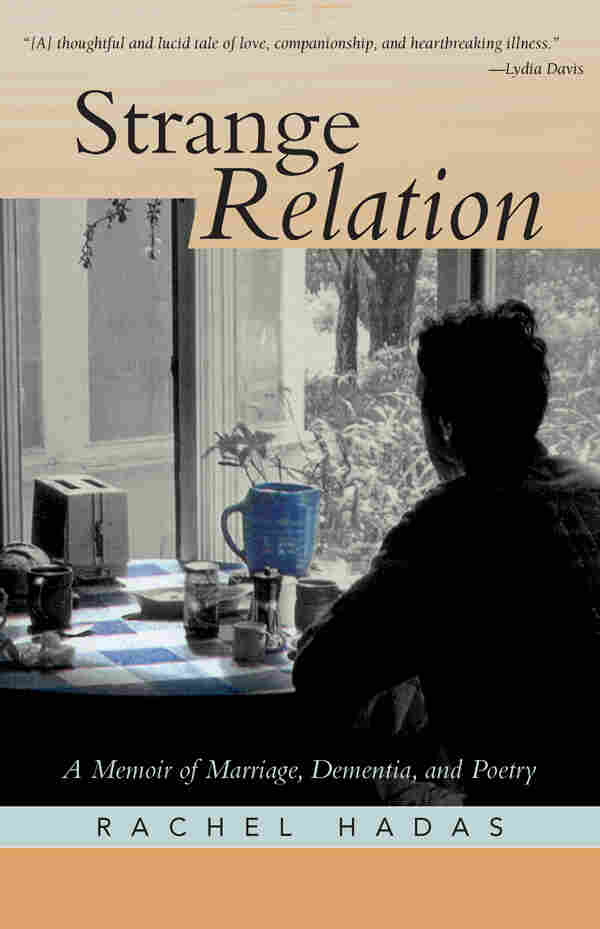 As Hadas negotiated the years before George moved to an assisted living facility, reading and writing became Hadas' life line. Not so much to console, she says, but just to help her manage. "Poetry has always been a way of coping for me ... since my father died when I was 17, I've turned to poetry not only to express my feelings ... but consistently to figure out what I was feeling at a given time."

George's disease "presented an enormous cognitive challenge, not only for him but for me," with a very steep learning curve, she says. "Poetry helped me to be a little less stupid as I stumbled through the process."

Literature also helped Hadas manage the loneliness of losing a spouse to a disease known as frontotemporal dementia. It "is terribly lonely and confusing to live with," she says. "It's enormously reassuring to realize not necessarily that other people have coped with this disease, though they have, but that they have coped with things that are just as hard or harder.

"Having read and taught Greek tragedy since I was in my early 20s, I really should have known this," says Hadas. "But it takes a lot to make us pay attention."

Hadas also discovered entirely new insights into her experience while re-reading old favorites, from Greek classics to Charles Dickens. "It's not so much that I said, OK, I think I'm going to re-read David Copperfield now." But as her husband piled up pages of his essays in their apartment she says she was reminded of the pleasant but confused character of Mr. Dick.

Hadas believes that anything worth reading is worth re-reading. "You ... read it the first time and miss most of the point, and then you come back to it ... It's just startling when things come back and kind of hit you."

That's the transformative power of literature — the power to make it one's own — that Hadas, a professor of English at Rutgers University, tries to instill in her students.

"I like to say to my students that a really successful poem floats free of its occasion, and floats free of any intention," she says. Novels, she notes, can do the same — like "Hans Christian Anderson's creepy, wonderful story The Snow Queen." The protagonist's "cold, heartless behavior looks like the behavior of someone with frototemporal dementia," says Hadas. "But presumably, that's not what Anderson intended."

Chapter 3: Into the Murky World

"What year did you get married?"

A gray December morning, 2004. George and I are sitting side by side, facing his new doctor across the desk. The internist Dr. L, a fresh-faced man with prematurely white hair, seems somehow able to simultaneously look us both in the eye, ask George questions, and type into his computer. I have accompanied George — brought him here, really — and asked to come into the doctor's office with him. Did I already know that he wouldn't be able to navigate by himself — navigate getting to a new place, navigate the history, navigate the Q and A?

George hesitates. At what point (I ask myself now) did I get so accustomed to his hesitant speech, as if he's rummaging around for reluctant answers? Exactly when did I get used to answering for him? And how could I have assumed for so long that in the fast-paced back and forth of the classroom, he must somehow be functioning just fine, although at home he barely spoke? All such assumptions, flimsy but stubborn, had collapsed like a house of cards the week before, when George's chair at the Columbia music department telephoned me in the middle of the day and the whole story came out — missed appointments, puzzled and frustrated students lining up to complain.

"He can't teach," she said. I was appalled — she and I both cried on the phone — but I was not surprised. A doctor had to be found to sign off on a medical leave. So here we are.

George hasn't yet answered Dr. L's question. Asking what year we were married is, I suppose, part of taking a history. Or is it more like a memory test? Or maybe both? At some point in the silence, I reluctantly recognize that, whatever the reason for this question, George has no idea of the answer.

A few snowflakes tumble lazily through the slice of gray sky I can glimpse out the window behind Dr. L. On the wall behind his computer are photographs of his family: laughing boys, a pretty woman, a dog. I drink some water. I'm not thirsty. Hot coffee would taste a lot better than cold water, but the bottle of water keeps me busy. I fold my hands around it and look down, or raise it to my lips to plug myself up. Clearly, I am not supposed to supply the answer to this question.

"1990?" George says, with a rising inflection that turns the answer into a guess.

I no longer remember precisely what happened next. Did I look at him? Did the doctor look at me? I know I went on clutching my water bottle like a talisman. I don't think I said in so many words — to either of those tall, handsome men, the one across the desk typing and the one next to me, the one to whom I'd been married since 1978 — that 1990 was not the answer. I do remember that rising inside me during this whole long, long appointment was a feeling it is a little too melodramatic to call panic. It was, rather, a sharply etched loneliness — a loneliness that stepped out from the shadows to which I had so far consigned it right onto center stage. There was also a queasy sense of shifting: shifting of power, of paradigms, of alliances, of allegiances. The center wasn't holding, and I was in the process, as I hung on to my clammy water bottle for dear life, of casting about for a new center. In all this there was alarm and fear, but really, as I now recall it, no surprise.

Two other bits of the Q and A stick with me from that first morning when I fully entered the world of what I had not yet learned to call "dementia." At some point in the history, or interview, or interrogation, Dr. L asked George to take what I now know is a standard memory quiz: remember three words for ten minutes or so. I can still repeat them: dog, pencil, car. George remembered none of them.

Toward the end of the session, Dr. L asked George about his hobbies, what he did for fun. Tennis, chess, and reading, came the answer. With a chill that had already become familiar, I realized that George no longer played chess, barely read, and for the past few summers had played tennis only when I or our son spent an hour on the court with him in Vermont.

Soon, very soon, I would learn (although for several years I still lapsed occasionally) not to share my thoughts about my husband with my husband. But that morning, when the appointment was finally over and the prescriptions and referrals were in my bag, when we were once more in the corridor outside the doctor's office, I thoughtlessly turned to George and said, "you know, what you said to the doctor about your hobbies — you don't really play tennis or chess or read much any more, so it wasn't really accurate."

Why would I say something so hurtful? Because for twenty-five years I had been used to sharing my thoughts with him; because I still habitually turned to him as a reality check, hoping he'd be able to comfort me, to brush away my silly misgivings. Because I desperately wanted to be reassured, and for years he had been pretty good at reassuring me. I was behaving as if he knew the truth of his own condition and as if that truth was, as he said to the neurologist we saw a few weeks later, that he was functioning at ninety percent of capacity. But what I blurted out was wounding, and he blamed the messenger.

All I remember of his response are the four words "you make me angry."

I didn't look ahead then — the present was more than enough to cope with. But I now see, and I'm pretty sure I had an inkling even that winter morning, that I was moving rapidly into a bleak new zone where my relationship with my husband could no longer be the natural center of gravity. Indeed I was well ensconced in that zone already, and had been for some time, but only now, like the characters in Sartre's No Exit settling into their overheated room, was I taking stock of my surroundings.

Already in December 2004, my role was to serve as an interpreter or translator between George and the world. This task involved much more than answering doctors' questions.

I had become the guardian not only of George's medical history but also of the story of his life, a story that was increasingly difficult for him to articulate and of which it seemed that I alone knew many of the facts. Experiences, feelings, all kinds of memories from six decades of lived life — somehow all this had come into my keeping. George hadn't been close to his siblings for years; his mother, disabled since 1979, had died in 2001. Colleagues? Friends? Where were they? Our son and I were the only people at this point who really seemed to know him, and Jonathan, who had been only fourteen or so when his father began to change, was now away at college. I was the sole custodian of the fragile freight of George's past. It was a lonely role. 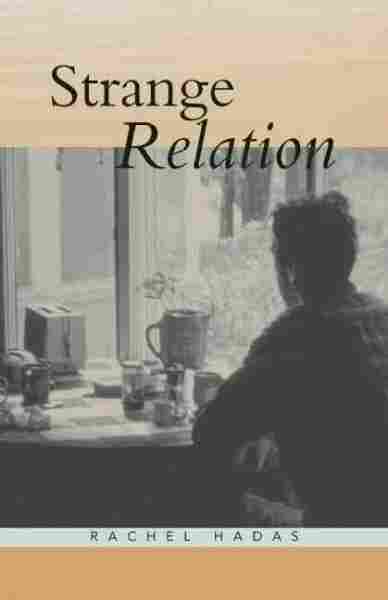 A Memoir of Marriage, Dementia, and Poetry