Accessibility links
Passion From Hell: Zandonai's 'Francesca da Rimini' A woman forced into a political marriage with a brutal older man falls madly in love — with her brother-in-law. The story is told in the second circle of hell.

From The Paris National Opera 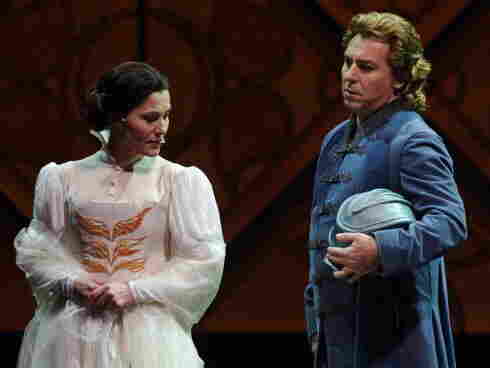 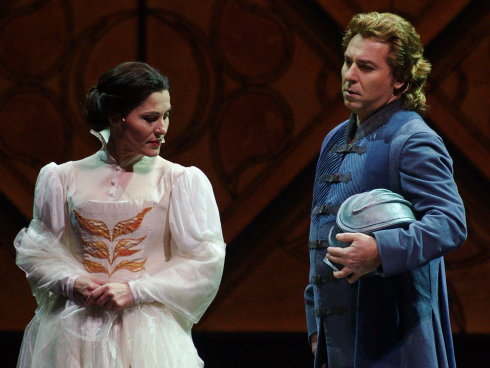 Francesca (Svetla Vassileva) is tricked into marrying an odious older man, but she still harbors feelings for his brother Paulo (Roberto Alagna).

Act Three ends with a duet for Paolo and Francesca (tenor Roberto Alagna and soprano Svetla Vassileva), in which Francesca struggles with remorse over their illicit passion. After Paolo remembers the loving forgiveness she offered him, for deceiving her when they first met, Francesca begins by asking why, if he feels forgiven, his face is so darkened by guilt.

The beauty of Zandonai's orchestral writing is on display in the final sequence of Act One. In what's been called a "silent duet," with the chorus providing atmosphere, Francesca and Paolo meet for the first time and fall deeply in love without exchanging a single word.

A decade or so ago, the British vocal ensemble Mediaeval Baebes made something of a splash by creating contemporary tunes with an ancient appeal, using poetry dating back hundreds of years. While that may be an unusual approach to pop music, classical composers have been doing it for quite some time — and in one song, the Baebes shared some material with Riccardo Zandonai, the composer of this week's opera.

The Baebes number in question is called "The Circle of the Lustful" — which may be the only clue you'll need to identify the source of the song's lyrics, and the opera's story. The Circle of Lust is the second circle of hell as described in Dante Alighieri's Inferno, and the eternal poetic home of a real-life medieval babe.

Francesca da Rimini was a contemporary of Dante in the late 13th century. As legend has it, she was forced into a political marriage with a brutal, much older man, and in the process fell madly in love with her brother-in-law. Eventually, the husband caught the two in the midst of passion and murdered them both. With a story like that one, immortalized by Dante, it's easy to see how Francesca's fate has been evoked by music ranging from Zandonai's opera and a Tchaikovsky tone poem to a 21st-century pop song.

Yet despite its famous story, Zandonai's Francesca da Rimini was sort of a flash in the pan. While the tale has been told in more than a dozen operas, including one by Sergei Rachmaninoff, Zandonai's version is the only one that's heard much today. And though Zandonai himself was once touted as the logical heir to Puccini, he never really lived up to his billing, with the success of Francesca da Rimini leading many to regard him as a one-hit wonder.

On World of Opera, host Lisa Simeone presents Zandonai's Francesca in a production from the Bastille Opera in Paris, starring soprano Svetla Vassileva as Francesca and tenor Roberto Alagna as her lover Paolo.

The Story of 'Francesca da Rimini' 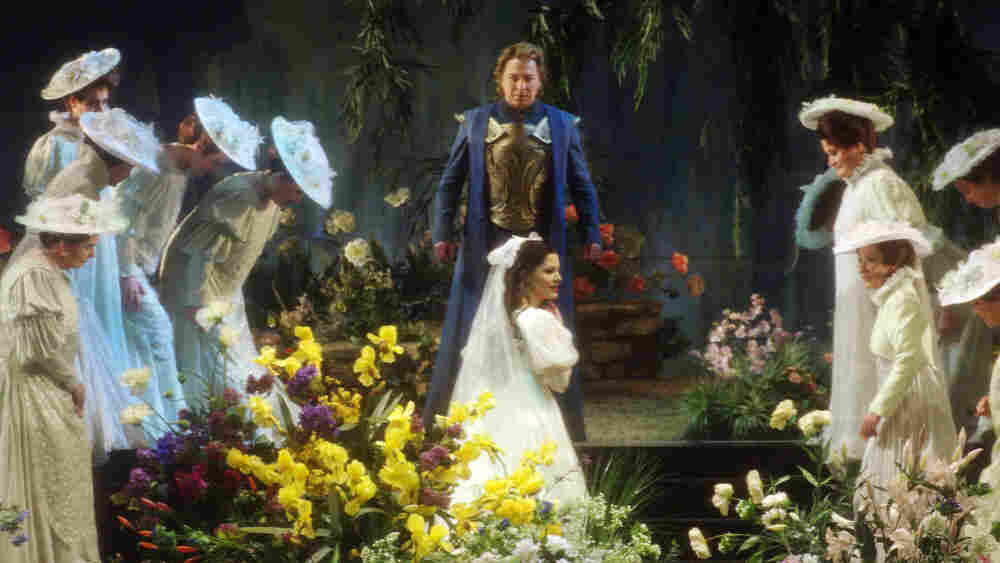 ACT 1 takes place at the Polentani Castle, Francesca's family home, where her four ladies-in-waiting are teasing Simonetto, a minstrel.

As part of a new alliance with the rival Malatesta family, Francesca's father has arranged for her to marry one of the Malatesta sons, Gianciotto, who is also known as Giovanni lo Sciancato — Giovanni the Lame. He's an older man, born with a physical deformity, who has a reputation for being both courageous and brutal.

Francesca's brother Ostasio is worried that when she meets Gianciotto, she'll refuse the marriage. But Gianciotto's handsome younger brother Paolo is about to arrive first, as an envoy. So Ostasio and the lawyer Ser Toldo decide to introduce Paolo to Francesca instead, as though he were to be her husband.

Francesca and her sister Samaritana know that the groom will arrive soon, and say their sad goodbyes — they've never been separated. Then the ladies call to Francesca and point to a young man walking through the garden. It's Paolo, and when he approaches, Francesca is instantly drawn to him. Impulsively, she cuts a blossom from a sacred rose bush and hands it to Paolo. Without exchanging a single word, the two fall in love.

In ACT 2 Francesca finds herself married to Gianciotto after all, and she's unhappy. She's alone at her husband's home, the Malatesta Castle, while Gianciotto is away at war. When she hears footsteps on the stairs, she thinks her husband may be returning — but it turns out to be Paolo. She scolds him for letting her think that he was to be her groom when they first met — and he shamefully confesses that he knew exactly what he was doing.

Their discussion is interrupted by sounds of battle. The castle is under siege. Paolo gives Francesca his helmet for protection, and when he takes up a defensive position on the ramparts, an arrow grazes his head. Francesca runs to him, thinking he's gravely wounded, but Paolo is unhurt — and with her concern, Francesca reveals her true feelings for him. 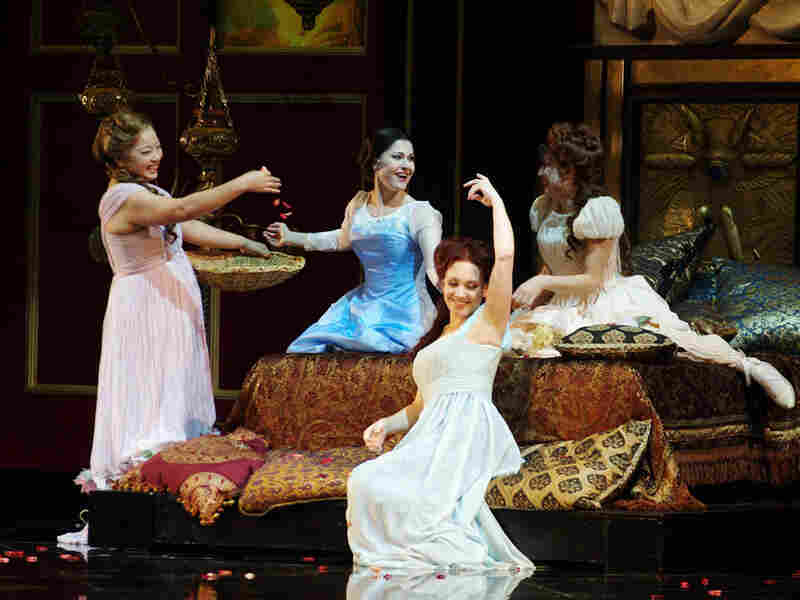 Gianciotto returns, saying the war is going well, but before long soldiers arrive carrying Malatestino — Paolo and Gianciotto's younger brother. Malatestino has been wounded, and he's blind in one eye. But after Francesca tends to him, his strength returns and he rushes back to the battle, saying a single eye is all he needs to fight.

ACT 3 takes place several months later, in Francesca's rooms at the castle. She's reading aloud to her ladies — telling them the romantic story of Lancelot and Guinevere.

The slave girl Smaragdi senses that something is wrong, and Francesca says that she's becoming afraid of Malatestino. To comfort her, Smaragdi offers to ask Paolo to come and visit, and the ladies summon a band of musicians for entertainment. As the singing and dancing proceed, Francesca again looks at the story of Guinevere, and tells Smaragdi to turn Paolo away.

But he arrives anyway, and reminds her of the rose she gave him when they first met, symbolizing her love. Then he asks her to read to him from the tale of Lancelot and Guinevere. They read the story together and before long they embrace, finally giving in to their passion.

ACT 4 begins in a hall at the Malatesta Castle, where Francesca is confronted by the one-eyed Malatestino. He's also in love with Francesca, and knows she'll never return his feelings. He has also noticed Paolo entering Francesca's rooms late at night — more than once — and then leaving early in the morning, and he slyly hints that he knows exactly what's going on.

They hear the cries of a prisoner from the dungeon below them, and Francesca says the man's screams have been tormenting her. To her horror, the sadistic Malatestino says he can put a stop to that — and heads into the dungeon with an axe.

Gianciotto then arrives, and seeing that Francesca is upset, he wants to know what has happened. She tells him that Malatestino has been cruel to her. When they hear steps coming up from the dungeon, Francesca is afraid and Gianciotto allows her to leave. Malatestino returns, carrying the severed head of the prisoner.

Gianciotto demands to know what Malatestino has done to upset Francesca. Malatestino says he's not the guilty one — and tells Gianciotto what he knows about Francesca and Paolo. When Gianciotto refuses to believe it, Malatestino tells him to wait until nightfall and see for himself.

The final scene takes place in Francesca's rooms. She's had a nightmare, and the ladies comfort her. After she's calm, the ladies leave and Paolo enters. But as the two embrace, Gianciotto pounds at the door. Paolo tries to hide, but Gianciotto finds him and draws a dagger. As he lunges at Paolo, Francesca jumps between them and is stabbed. As she falls, bleeding, Gianciotto also stabs Paolo, and the lovers die together as the opera ends.