Accessibility links
Interview - Cary Fukunaga - Leading 'Jane Eyre' Toward The Dark Jane Eyre returns to the silver screen in a new version from Cary Fukunaga — director of the acclaimed Sin Nombre — whose version of the Gothic romance still swoons, even as it flirts openly with the conventions of horror. 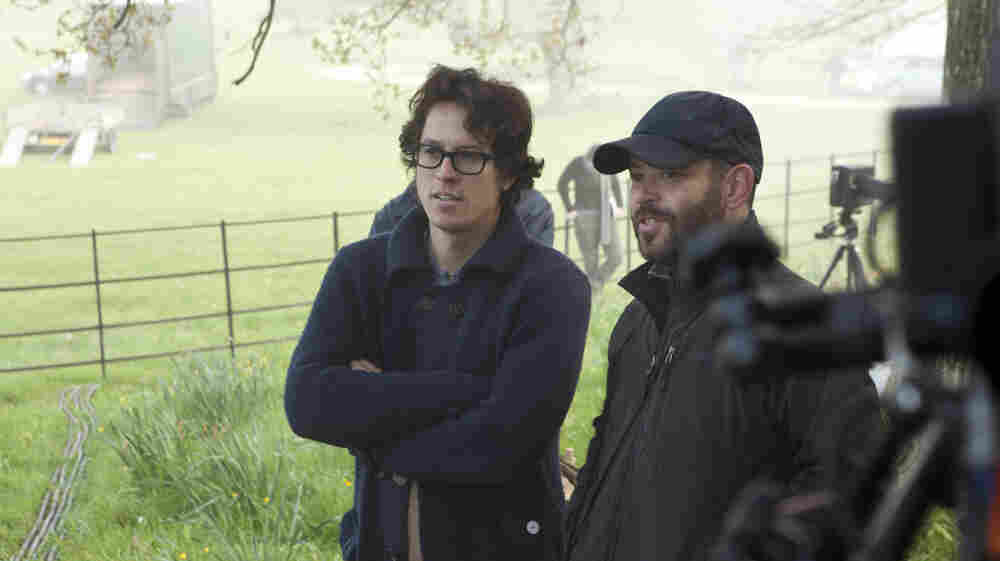 Cary Fukunaga (left) and cinematographer Adriano Goldman on the set of Jane Eyre. The director remembers watching the classic 1943 film of the novel with his mom — and says its shocks helped shape his version. Laurie Sparham/Focus Features hide caption 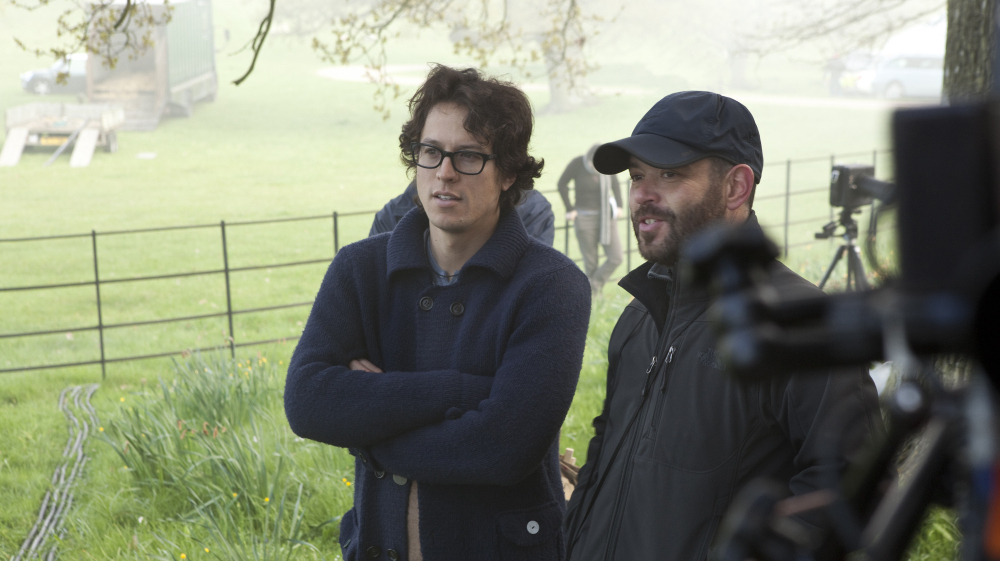 Cary Fukunaga (left) and cinematographer Adriano Goldman on the set of Jane Eyre. The director remembers watching the classic 1943 film of the novel with his mom — and says its shocks helped shape his version.

Jane Eyre has been adapted dozens of times for movies and TV, and now the Gothic romance — one of the most English of stories — gets another retelling, this time from the young American director Cary Fukunaga.

In the Charlotte Bronte classic, the heroine is an orphan child who has never known kindness or affection until she arrives at Thornfield Hall, the estate of one Mr. Rochester, to work as a governess. There, Jane earns her employer's love, even as she begins to wonder about what seems to be a dark secret locked away in the attic.

A New 'Jane Eyre,' With Many A Vintage Pleasure

I Would Do Anything

'I Would Do Anything'

Is That How You Perceive Me?

'Is That How You Perceive Me?'

Why Must You Leave?

'Why Must You Leave?'

Fukunaga says one of his earliest movie memories was the 1943 version of Jane Eyre starring Orson Welles and Joan Fontaine.

"My mom loved the old black-and-white films," Fukunaga tells NPR's Renee Montagne. "Since we had a VHS recorder, we were taping them off TV, and I remember Jane Eyre being one of the first [tapes] we had."

He recalls one scene especially vividly — the revelation of the terrible thing in that mysterious attic.

"I really remember ... just being really shocked by it," Fukunaga says. No surprise, then, that he went for a measure of that same shock in his own version, which might well inspire a few startled jumps in the nation's theaters. But it's dangerous territory for a filmmaker.

"Once you start mixing horror [with romance], it's very difficult to tell the audience what kind of film they're watching," Fukunaga says. "It's rare that you can promote a love story and feel fear in a film."

And though it flirts with horror, Fukunaga's Jane Eyre invests wholeheartedly in its love story.

'Emotional Intellect' To Round Out A Singular Personality

Bronte's Jane has her own particular vision of what life should be like, her own sense of right and wrong and truth. She loves Rochester; he loves her, though he's not a free man. And in Fukunaga's version, when Mia Wasikowska's Jane decides that she has no choice but to absent herself from Thornfield, her anguish is palpable and raw. It's a kind of openness that would have been fairly singular in the 1840s.

"It's her emotional intellect as well as her normal intellect that I think inspires Rochester," Fukunaga says, "her awareness of her own feelings and her own value. ... I think her ability to point out what is oftentimes overlooked is something that he is absolutely attracted to." 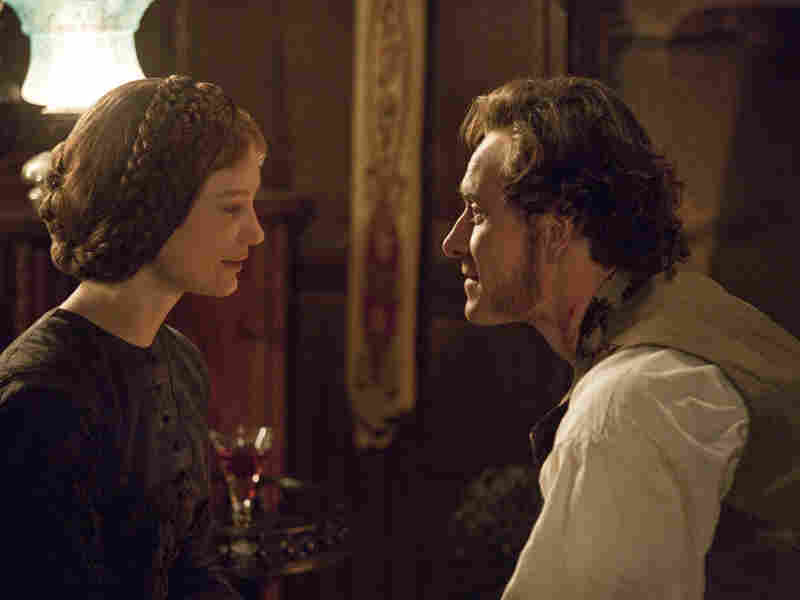 Mr. Rochester (Michael Fassbender) and Jane Eyre (Mia Wasikowska) navigate the murky waters of love once again in Fukunaga's adaptation. The heroine remains as steel-spined as ever, the director says — "willing to throw away ... [an] opportunity to live for love" if it means sacrificing her self-respect. Laurie Sparham/Focus Features hide caption 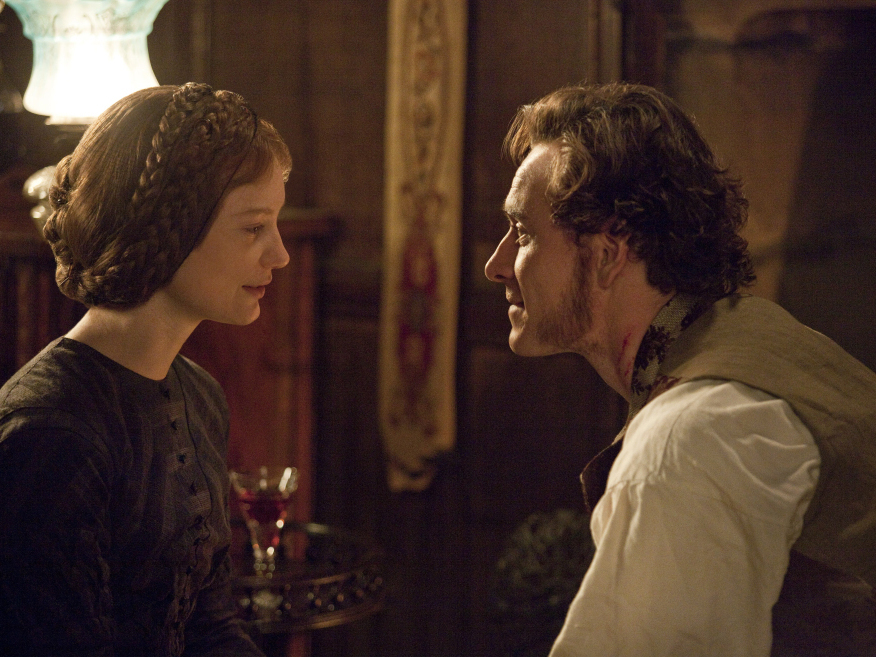 Mr. Rochester (Michael Fassbender) and Jane Eyre (Mia Wasikowska) navigate the murky waters of love once again in Fukunaga's adaptation. The heroine remains as steel-spined as ever, the director says — "willing to throw away ... [an] opportunity to live for love" if it means sacrificing her self-respect.

Indeed, for 160 years Jane Eyre has appealed to readers in no small part because she doesn't seem to care what people think; she's invested instead in what she understands to be the truth.

"She won't compromise that," Fukunaga says, "even though she's absolutely in love with Rochester. To live with him would go against her morals, and against her respect for herself. ... And I think that's rare today. Today, even, people often compromise themselves in order to try to maintain a love, even if it destroys them."

Of course another factor in Jane Eyre's endless fascination is that Rochester isn't especially admirable. He's dissolute, by his own admission. To help make audiences care about him, or at least about Jane's feelings for him, movie directors return again and again to the oldest trick in Hollywood.

"Traditionally you make him pretty," says Fukunaga, whose own Rochester, Michael Fassbender, doesn't precisely fit that mold. "He's a very rugged man. He's a man's man in that sense. I think what you look for there is a fierceness — a fierceness that is covering for a lot of pain and, here, anguish."

'Incredible Imaginations' In A Circumscribed World

Charlotte Bronte herself dealt with loneliness, and her story ended sadly. She lived in a tiny parsonage set in the middle of a cemetery, in a small mill town. She, her sisters and her brother wrote to entertain themselves — "these mini-epic fantasy novels on paper about 2 inches by 2 inches big," Fukunaga says. "They had incredible imaginations."

"You know, there's a scene in Jane Eyre where Jane talks about the limited horizon that women have, that men get to go wander the world but [women] have to stay there. And I think that it's hard to separate Charlotte from Jane."

Not long after she married, Bronte died from complications from her first pregnancy. She had written letters to friends describing "the misery she was going through," Fukunaga says, "and the fears she had of what could potentially happen — and what came true."

"The books," Fukunaga says — "obviously, the books are immortal."