Accessibility links
Nuclear Fears Emerge After Quake, Tsunami In Japan Safety concerns loomed at two neighboring nuclear power plants after a giant tsunami driven by one of the largest earthquakes on record swamped northern Japan's eastern coast Friday, leaving massive destruction in its wake. The final toll of the disaster is far from clear, but Japanese officials say at least a thousand people have died.

A giant tsunami driven by one of the largest earthquakes on record swamped northern Japan's eastern coast Friday, leaving massive destruction in its wake and sparking safety concerns at two nuclear power plants.

Even as floods and fires wreaked havoc, Japanese officials were racing to repair failed cooling systems at the neighboring nuclear power plants. Meanwhile, Japan's nuclear safety agency was set to order the release of what is being described as "slightly" radioactive vapor.

The final toll of the disaster is far from clear, but hundreds of people have been killed. Roads to the worst-hit areas were washed away or blocked by debris and airports were closed.

The quake sent tsunami waves into Hawaii and the U.S. West Coast hours later, while warnings blanketed the entire Pacific, as far away as South America and Canada.

As dawn arrived Saturday, the extent of the damage started to become clearer. Aerial scenes of the town of Ofunato showed homes and warehouses in ruins. Sludge and high water spread over acres of land, with people seeking refuge on roofs of partially submerged buildings. At one school, a large white "SOS" had been spelled out in English.

The magnitude 8.9 earthquake rocked Japan at 2:46 p.m. local time — the biggest temblor to hit the country since officials began keeping records in the late 1800s. Dozens of cities and villages along a 1,300-mile stretch of coastline were shaken by violent tremors that reached as far away as Tokyo, hundreds of miles from the epicenter.

The seismic shaking unleashed a tsunami up to 30 feet high in some places, and more than 50 aftershocks followed, many of them magnitude 6.0 or greater.

On Friday, police said 200 to 300 bodies were found in the northeastern coastal city of Sendai in Miyagi prefecture, the city closest to the quake's epicenter. The official casualty toll was 236 killed, with more than 700 still missing.

Police also said more than a thousand people were injured. Japan's coast guard reported that it was searching for about 80 dock workers swept out to sea from a shipyard in Miyagi.

The massive quake caused power outages that disabled cooling systems at one reactor unit at the Fukushima No. 1 nuclear plant — 150 miles north of Tokyo — and three more at the nearby Fukushima No. 2 plant.

Officials emphasized there was no risk of a radiation leak. But nearly 3,000 people in Fukushima prefecture were ordered to evacuate the area. Residents were initially told to stay at least two miles away from the plants. That boundary was later expanded to six miles.

Though the plants were shut down after the quake — and some shut down automatically — leftover radioactive materials will continue to produce intense heat for a day or two, making it essential that pumps keep circulating cool water to prevent the core from melting. 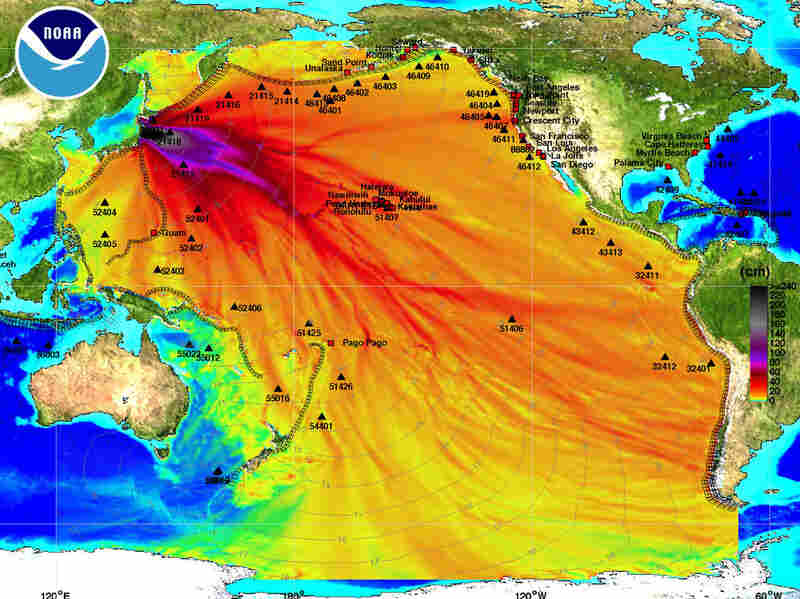 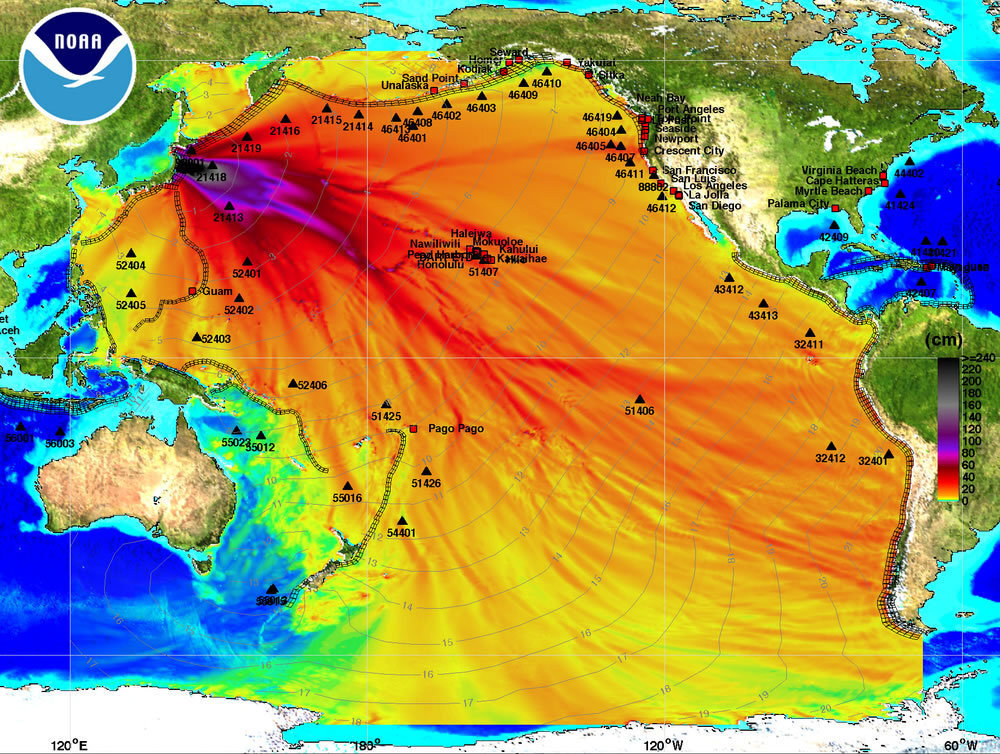 The pumps lost their main power in the earthquake — and a backup system of diesel generators failed to kick in, perhaps because of damage from the tsunami.

That left only a battery backup designed to operate for about eight hours.

Meanwhile, officials were considering the possibility of releasing slightly radioactive vapor to reduce pressure on the system.

Chief Cabinet Secretary Yukio Edano said the amount of radioactive element in the vapor would be "very small" and would not affect the environment or human health. "With evacuation in place and the ocean-bound wind, we can ensure the safety," he said at a televised news conference early Saturday.

Nuclear power plants like the one at Fukushima are designed to contain nuclear material even if the cooling system fails.

Japan, which relies on nuclear power for nearly a third of its electricity generation, closed at least three other plants as a precaution after the reports of damage at Fukushima and another facility, according to the International Atomic Energy Agency.

Japanese TV images from Sendai showed highways buckling and older wooded structures flattened by the force of the shaking. As the tsunami wave swept ashore, Sendai airport was instantly inundated. The wave washed through a fish market near the shoreline, picking up an entire parking lot full of cars and sweeping them into the sea.

I've been through many earthquakes, but I've never felt anything like this. I don't know if we'll be able to get home tonight.

In one town alone on the northeastern coast, Minami-soma, some 1,800 houses were destroyed or badly ravaged, a Defense Ministry spokeswoman said.

In Tokyo, video images showed a large building on fire and billowing smoke in the Odaiba district. The tremor bent the upper tip of the iconic Tokyo Tower, a 1,093-foot steel structure inspired by the Eiffel Tower in Paris.

Buildings shook violently and workers poured into the street for safety as the temblor hit, but there were few reports so far of collapsed buildings — a sign that stringent building codes may have averted a far greater disaster.

Earthquake experts in the U.S. say Japan has the strongest building standards in the world for withstanding earthquakes. It trains and prepares more for them. And unlike the United States, Japan adopted an expensive earthquake early warning system that gave people a precious few seconds to duck and cover.

The quake was 700 times more powerful than the one that struck Haiti last year, but the death toll appears to be far lower than the 220,000-plus killed in the Caribbean.

"If anyone is in the position to ride this out, it is the Japanese," said David Applegate, senior science adviser at the U.S. Geological Survey.

Even so, Friday's quake caused a rupture 186 miles long and 93 miles wide in the sea floor 80 miles off the eastern coast of Japan. It was caused when one giant tectonic plate was shoved under another — the same type of movement that caused the devastating 2004 Indonesian tsunami.

"You're looking at something that's rupturing a very significant patch of the Earth's crust," Applegate said.

Osamu Akiya, 46, was working in Tokyo at his office in a trading company when the quake hit. It sent bookshelves and computers crashing to the floor, and cracks appeared in the walls.

"I've been through many earthquakes, but I've never felt anything like this," he said. "I don't know if we'll be able to get home tonight."

Tokyo airports closed and all public transportation was shut down. NHK said more than 4 million buildings were without power in the city and its suburbs.

As night fell and temperatures hovered just above freezing, tens of thousands of people remained stranded in Tokyo. The streets were jammed with cars, buses and trucks trying to get out of the city.

The city set up 33 shelters in city hall, on university campuses and in government offices, but many planned to spend the night at 24-hour cafes, hotels and offices.

"Normally, we're used to building shaking, but this just went on and on and on," Lucy Craft reported for NPR from Tokyo. She said she was in the building in Tokyo that houses Japan's Diet, or parliament, when the quake struck.

"The subways were stopped, most of the transportation links are halted now; the highways are closed; trains are not running. It's difficult to make phone calls," Craft said. "The country has just come to a screeching halt."

She said Japan spends huge amounts of money on disaster prevention and resistance. But even for a country used to earthquakes, this one was of horrific proportions.

The quake struck at a depth of six miles, about 80 miles off the eastern coast, according to the U.S. Geological Survey. The area is 240 miles northeast of Tokyo.

"The energy radiated by this quake is nearly equal to one month's worth of energy consumption" in the United States, USGS Scientist Brian Atwater told The Associated Press.

Edano, the Cabinet secretary, said the Defense Ministry was sending troops to the quake-hit region. A utility aircraft and several helicopters were on the way.

Obama expressed his condolences and offered U.S. aid to Japan.

"Our hearts go out to our friends in Japan and across the region, and we're going to stand with them as they recover and rebuild from this tragedy," he said at a Friday afternoon news conference in Washington.

Obama said he was heartbroken by the tragedy in Japan and that it was "a reminder of just how fragile life can be."

Earlier, he said U.S. officials were monitoring tsunamis in the Pacific and that he had ordered FEMA to be ready to assist Hawaii and any other affected U.S states and territories.

In Hawaii, where vulnerable areas were evacuated, water rushed up on roadways and into hotel lobbies on the Big Island, and low-lying areas in Maui were flooded as 7-foot waves crashed ashore. California harbors were severely damaged, and at least one person was reported missing in the northern part of the state after he was swept out to sea.

The tsunami warning extended to a number of Pacific, Southeast Asian and Latin American nations, including Japan, Russia, Indonesia, New Zealand and Chile.

A History Of Killer Quakes

The area of Japan devastated by Friday's quake had been hit by several temblors in recent days, including a magnitude 7.3 event Wednesday.

Japan lies on the "Ring of Fire" an arc of earthquake and volcanic zones stretching around the Pacific where about 90 percent of the world's quakes occur, including the one that triggered the Dec. 26, 2004, Indian Ocean tsunami that killed an estimated 230,000 people in 12 nations. A magnitude-8.8 temblor that shook central Chile last February also generated a tsunami and killed 524 people.

With reporting from NPR's Louisa Lim in Beijing; Lucy Craft in Tokyo; Lisa Schlein in Geneva; and Jon Hamilton in Washington. Material from The Associated Press was used in this story.