Accessibility links
The Famous Meet Gory Ends In 'How They Croaked' In her illustrated book for middle-grade readers, How They Croaked, Georgia Bragg chronicles the disgusting and bloody deaths of 19 famous figures, from Beethoven (who exploded with pus) to George Washington, who bled to death. 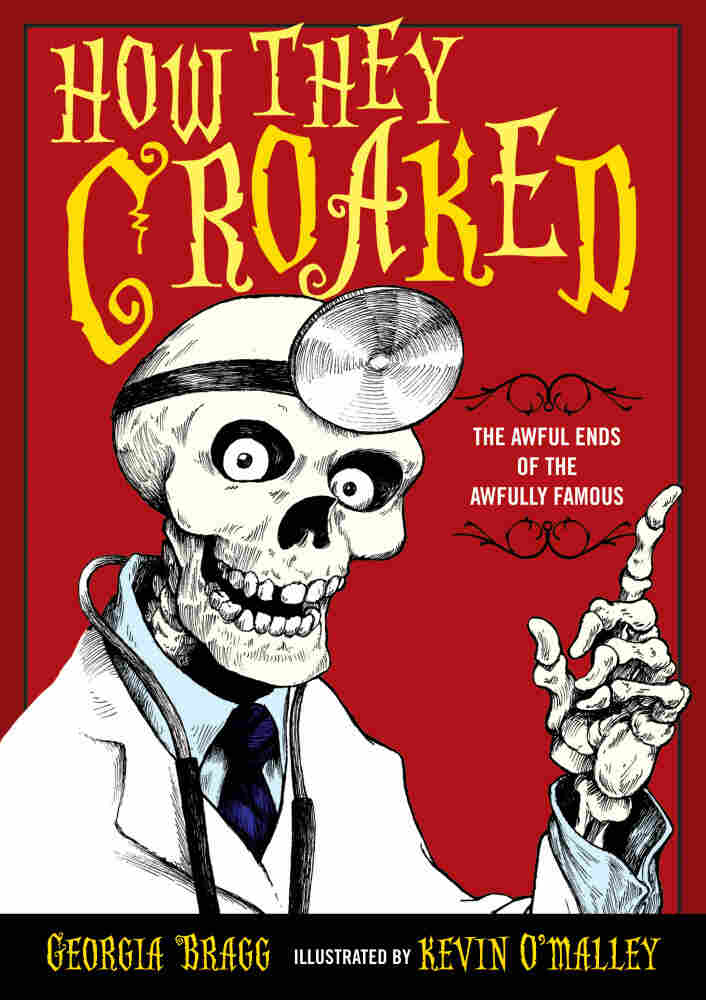 How They Croaked: The Awful Ends of the Awfully Famous
By Georgia Bragg
Hardcover, 192 pages
Walker Books for Young Readers
List Price: $18

How They Croaked: The Awful Ends of the Awfully Famous is a new book we really needed. Author Georgia Bragg has gathered the gory stories behind the last days of 19 famous figures, all in one cleverly illustrated book.

Of course, it is not a book for the fainthearted. One's first reaction when reading it — as was the case with Weekend Edition host Linda Wertheimer — tends to be, "gross!" But as Wertheimer says, "Perhaps that's the point of this delightful and disgusting sliver of history." She spoke with Bragg about her macabre collection and why we can't look away when it comes to famous deaths.

Bragg opens the book with a warning: "If you don't have the guts for gore, do not read this book."

When asked whether "little kids" have the appetites to read about disgusting deaths, Bragg says, "My target audience is around 10 to 12 to older. We might as well meet them where their interests are and it might get them more interested in history and other parts about these famous people's lives." 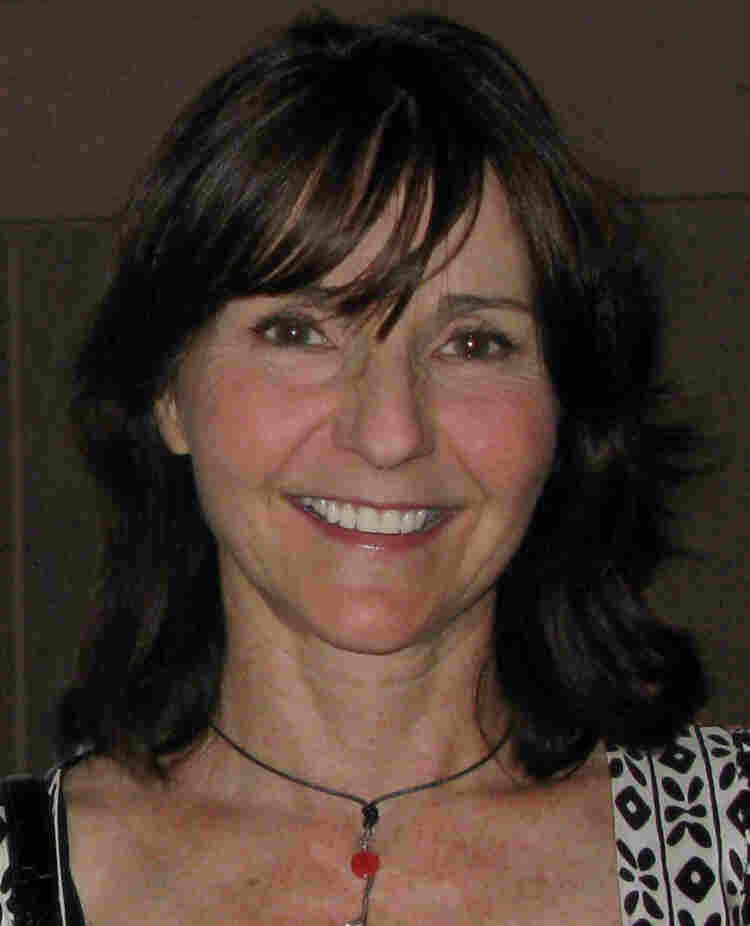 Georgia Bragg is the author of the middle-grade novel Matisse on the Loose. She lives in Los Angeles. Courtesy of Georgia Bragg hide caption 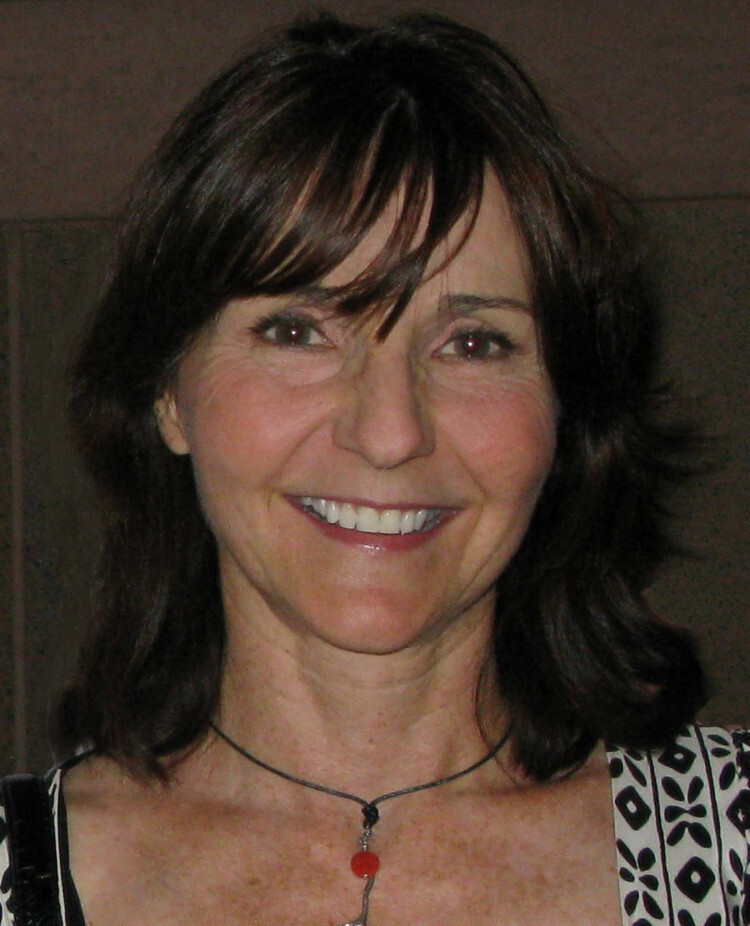 Georgia Bragg is the author of the middle-grade novel Matisse on the Loose. She lives in Los Angeles.

Bragg says several times in the book that modern treatments could have prevented some of the terrible deaths that she chronicles. For example, George Washington.

"Antibiotics would have saved George Washington at that time. His doctors drained half the blood out of his body. They gave him the blister beetle treatment. They are ground up poisonous beetles, that when they are placed on the skin, the skin blisters up and then pops."

"It is sad, but it is a bitter comic truth, that we all are going to be heading that way," she continues. "I don't tell these stories to frighten kids. I'm trying to turn history upside down and see if we can get some of the connections of culture and science and medicine together in a different way."

As for what the book will accomplish, Bragg says that she hopes that her nauseating stories will turn young readers on to more historical explorations.

Excerpt: 'How They Croaked'

How They Croaked: The Awful Ends of the Awfully Famous
By Georgia Bragg
Hardcover, 192 pages
Walker Books for Young Readers
List Price: $18

Beethoven's dad forced him to practice the piano, like dads have done since the dawn of music. We don't know what tunes Beethoven practiced, but today, kids are forced to play Fur Elise and Moonlight Sonata, melodies that Beethoven wrote. Practice paid off for Beethoven and he became a musical genius. He played his first gig when he was eight years old. He performed for kings, he did concert tours, and he had a lot of fans. And he had long hair just like a rock star. It turns out Beethoven's hair helped uncover how he died.

Today, you can get Beethoven's music as a ring tone on your cell phone. But back then, without CDs or iPods, the only way to hear his music was live. You had to be there with him in concert. However, something went wrong for Beethoven. Eventually Beethoven couldn't hear what he was playing at his own concerts because he went deaf.

He started losing his hearing when he was twenty-seven. By forty-five, he was totally deaf. Over time, Beethoven had to imagine the music he was playing. He only heard what he composed inside his head, between his ears, under his long hair. When he wrote his ninth symphony, he couldn't hear a thing. That's like Leonardo da Vinci painting the Mona Lisa with his eyes closed.

Take a gander at his piano. Even though Beethoven was unable to hear, he always composed at his piano. He picked up and moved with his piano forty times in his lifetime, and that was no easy thing, considering there were no trucks or cranes or piano dollies.

Being deaf made him not want to be with people, especially ladies. He was a bachelor and there weren't any little Beethovens, so it's kind of funny and sad he was named the greatest Romantic composer.

There was no sign language back then, so Beethoven and his friends wrote notes back and forth, like instant messaging on the computer, but with a pencil and paper.

Beethoven was clumsy and cranky most of the time. He had stomach problems that made him feel lousy for the last thirty years of his life, with constant diarrhea, vomiting, and gas. Houses had no plumbing yet, which means there was no toilet either. He had to use a thing called a chamber pot.

In 1827, Beethoven got pneumonia, and he couldn't shake it. His stomach was killing him. He couldn't go to the bathroom (chamber pot); his skin was the color of a banana, and blood dripped out of his mouth. Then he got dropsy. That's when fluid inside your body that's supposed to get out, can't. Very quickly, Beethoven's body filled up with rotting fluid. He got huge. His stomach bloated, and the skin stretched across it tight as a balloon.

A doctor in 1827 didn't know much more than a doctor in the Middle Ages, so Beethoven's doctors figured all that Beethoven needed was a drain to get the liquid out. They took him to the hospital. But back then, half the people who went into the hospital came out dead.

At the hospital, a hole was drilled into Beethoven's stomach, and then they stuck a hose in it. Beethoven experienced the most painful day of his entire life. Awake and without pain medicine, Beethoven watched forty cups of white pussy gunk flow out of his belly—enough to fill ten quart bottles. This was before stitches, so his doctor plugged the hole with some rags, and sent Beethoven home.

The gunk continued to leak out of the hole in Beethoven's stomach. But his belly got even bigger than before they had taken him to the hospital. He went back to the hospital three more times. His doctor reinserted the hose into the same hole each time. And, no surprise, the hole got infected.

So his doctors attempted another "cure". They tried to sweat out the liquid with a steam bath. They propped Beethoven up in a tub filled with jugs of hot water. A sheet was spread on top of the tub. They didn't cover Beethoven's head because that's where all the music came from, and they were smart enough not to mess with that. After a few hours, the sheet was removed. Instead of sweating out the liquid, his body had absorbed the steam like a giant sponge. Poor Beethoven was as big as the Goodyear blimp.

Since there were no such things as photographs to remember him by, a friend summoned an artist to make a drawing of Beethoven shortly before he went unconscious.

After he died, souvenir hunters came and took snips of Beethoven's hair off his head. Some got snips when nobody was looking, some paid for it, and some had already clipped his hair before he was officially dead. By the end of the day, he was completely bald. It was a quirky custom, but a common one before photography.

The doctors cut Beethoven's body open and performed an autopsy. All his inside parts were too small or too big, too soft or too hard—the opposite of what they should have been. The autopsy folks sliced Beethoven's skull crosswise at the top; they wanted to look inside his famous head to see if they could detect what made him so special. They took his temporal bones out to study them. But mysteriously, the bones disappeared, and a little while later the autopsy reports disappeared, too.

Once again, because there was no such thing as photography, wet plaster was smashed into the contours of Beethoven's face to make a thing called a death mask. It was unpleasant and hard to do because, from the eyebrows up, Beethoven's head was already gone from the autopsy the day before.

Twenty thousand fans came to his funeral. A ring of white roses was placed on his head to hide the mess that they made at the autopsy.

Beethoven's gravedigger was offered a lot of money to remove what was left of Beethoven's head before the burial, and to drop it at a secret location. But the gravedigger said no. A night watchman was hired so that no one would dig Beethoven up and take his head.

Thirty-five years later, in 1863, Beethoven's music was even more popular. His body was dug up and put in a better coffin. The experts took another look at his famous head. His skull was measured, and cast in plaster. By then, photography had been invented, so they took some pictures of it too. To make sure no one stole Beethoven's skull while it was studied, an old friend took it home and slept with it next to his bed. But mysteriously, some of the photographs of Beethoven's skull disappeared.

Turns out the friend who took Beethoven's skull home to keep it safe probably ended up giving some pieces of it away, because twenty years later, in 1888, Beethoven's music was even more popular. They dug him up again, and put him in an even bigger, nicer cemetery. And it was then that they noticed ten missing skull pieces. Some way, somehow, a skull collector had gotten the pieces of Beethoven's skull.

The family of the skull collector, who had gotten the ten skull pieces in 1863, passed the fragments from generation to generation. It wasn't until 1990 that the person who last inherited the bones wanted to get rid of them. Beethoven scholars couldn't wait to get their hands on them.

Scientists analyzed the lock of Beethoven's hair and they figured something out about Beethoven they never could have guessed in the 1800s when he was alive. Poor Beethoven had massive lead poisoning, 100 times the normal level. They're not sure how he got it, but it caused every problem he had with his stomach, along with his clumsiness and irritability. But it did not cause his deafness.

Stay tuned. Beethoven is even more famous now. Who knows what else will turn up? 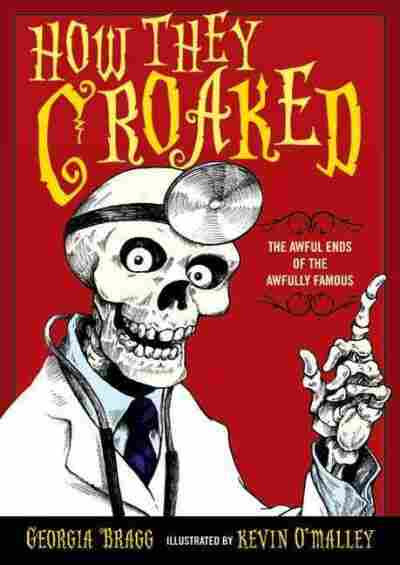 The Awful Ends of the Awfully Famous

by Georgia Bragg and Kevin O'Malley